That’s right, in spite of the temptation to continue with yet another frog monster, this week we’re jumping species–bringing you an agile monster that offers sustainably scale-able solutions for any encounter–so prepare to disrupt the monster industry as we bring you a proven value-adder that’s been retooled for mobile. Without further adieu, the latest killer APP*: the Yuan-Ti. Cue the spotlight.

Yuan-ti are fascinating. They’re devious snakepeople who are equal parts monster, narrative threat, and theme all rolled up into one. They are one of a small number of monsters that come with their own implicit story that you can either flesh out or ignore. Maybe it’s in the way they resemble something out of the depths of a Frazetta painting or a Conan story, or in the subtle insidiousness of their various forms–but the Yuan-Ti come with their own ideas, so to speak.

As a very brief overview, Yuan-Ti typically come in at least three varieties–the purebloods (which mostly look human), halfbloods (like our friend up there human except for where they’re snake) and then the abominations (mostly snake with a little bit of human) who are the most powerful. Right away they suggest some kind of transformation. Most of the Yuan-Ti could pass for humanoid–which implies that they do. Without even reading too much into them, it’s easy to imagine a cult of Yuan-Ti purebloods infiltrating human society and promising power in exchange for service to their serpentine masters–who are only revealed once it’s too late.

They practically beg to be ruling from a hidden temple deep within a steamy jungle, amid ancient curses and foul magics that poison the hearts and minds of their foes. You could center a whole campaign around them with very little effort–or just use them for the occasional flavor. It doesn’t matter what campaign setting you’re using, the Yuan-Ti seem to fit. Even campaign settings that bridge the multiverse… but then I guess snakes make sense on any plane. 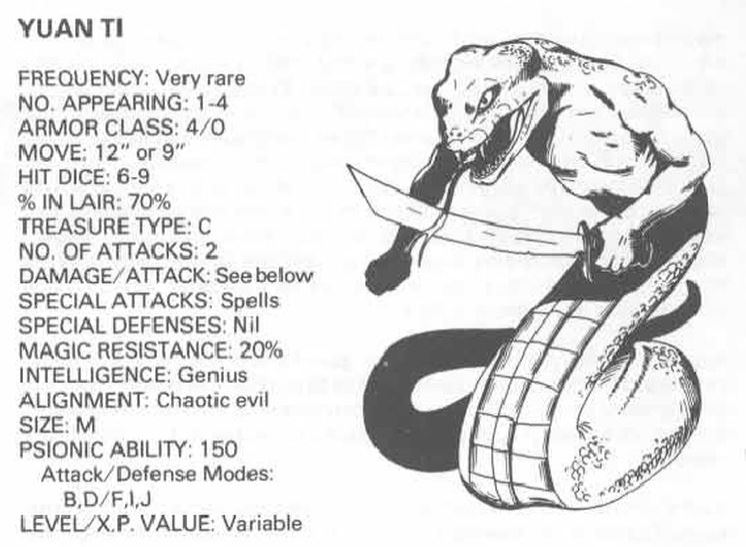 The Yuan-Ti first appeared in the Monster Manual II in 1st Edition AD&D. Even then they came in the three basic flavors we talked about. And like many classic monsters, their 1st Edition impression has defined them going forward. Described as creatures who were once human, whose blood has been corrupted by dark and unknown practices, you can see the suggested story taking shape. Here are demon-worshippers who want to corrupt others.

And they have a lot to offer prospective servants. They’re more powerful than many humanoid creatures, with even the purebloods weighing in at 6 hit dice and capable of casting cause fear, darkness, snake charm, stick to snakes (for when you need to get biblical), neutralize poison, suggestion, and polymorph other. All that in addition to their attacks and innate psionic abiltiy. Even a pureblood was a formidable foe–and powerful enough to attract a following that could threaten the PCs.

As they got more hit dice, they got more snake-like, and could sometimes have a snake head or snake arms that did additional damage on a bite (1d10 for a snake head, or 1d6 per head with snake arms) or an AC of 0 (back when that was a great thing to have) from their thick, scaly hide.

Then Dragon #151 came out and expanded on their lore, making them almost impossibly ancient–abominations could live up to 6,000 years. They also got a few new monsters specific to their own unique themes, including a serpentine demon lord, Sch’theraqpasst who was driven insane after trying to merge his life-essence with the plane of the abyss in an attempt to become a living plane, and the Histachii–twisted human breeding stock they use to swell the ranks of their armies. 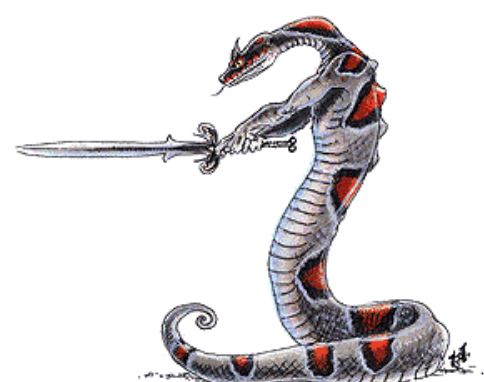 Between 1st and 2nd Edition, the Yuan-Ti remained largely unchanged. Their ecology became a little more detailed–their tactics became more developed, with the Yuan-Ti gaining an affinity for traps, ambushes, and poisons as befit their genius intelligence. As before the Yuan-Ti came in their standard three flavors, plus the Histachii, officially this time.

They weren’t so much changed by this new edition as they were given more of a purpose. Their society was given a default hierarchy with human-headed abominations at the top, as powerful high-priests who strove to convert others by force to their dark gods. 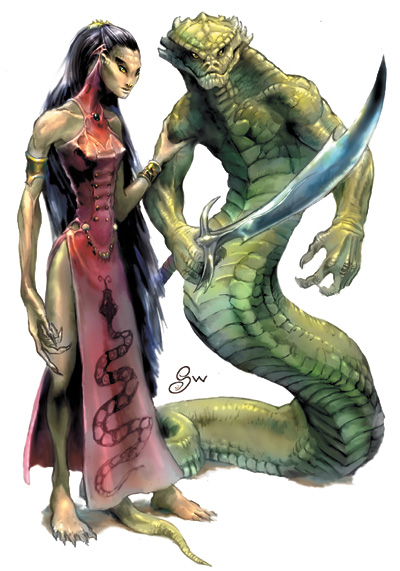 3rd Edition Yuan-Ti became a lot more varied. They were included throughout a number of books in this edition. Beginning with the basic three, we can see a few subtle changes that bring out their serpentine nature a little more. Purebloods all gained a point of natural armor, which was great in the stacking AC days of 3.5. They also retained their spell-like abilities, had their to hits adjusted a little higher, and gained a number of feats like Alertness and Blind-Fighting to really help hammer home the idea that these are more reptile than human. And though, sadly, in this edition Sticks to Snakes is no longer a spell, they do gain entangle, charm person, and animal trance on top of their normal spellcasting suites.

Halfbloods, on the other hand, gained some much needed poison attacks to make them feel much more like fighting a snake hybrid. Additionally they gained the ability to psionically camouflage themselves, chameleon-style, the ability to produce powerful acid defensively, and to track things by scent. And those lucky few halfbloods who enjoy having a snake body or tail gained the ability to use them to add a constrict attack (and remember, grappling was amazing in this edition) to creatures of a certain size.

And abominations became officially Large creatures, and like the purebloods, they gained a few much needed poison attacks, including the weapons that they use with their human arms. But that’s the least of their gains in this edition. Abominations rose up, mechanically speaking, to take their place at the top of the Yuan-Ti food chain. They gain an Aversion which means players have to make a pretty tough Will save in order to be able to stand facing up to the snakes. They also all gained improved grab, constrict, and poison, as well as access to some higher levels spells which help them infiltrate cults of humans much better.

And that’s not even going into the other monsters that were added in this edition. Most of them were variations on a theme, but a few, like the Yuan-Ti Anathema, were decidedly unique. 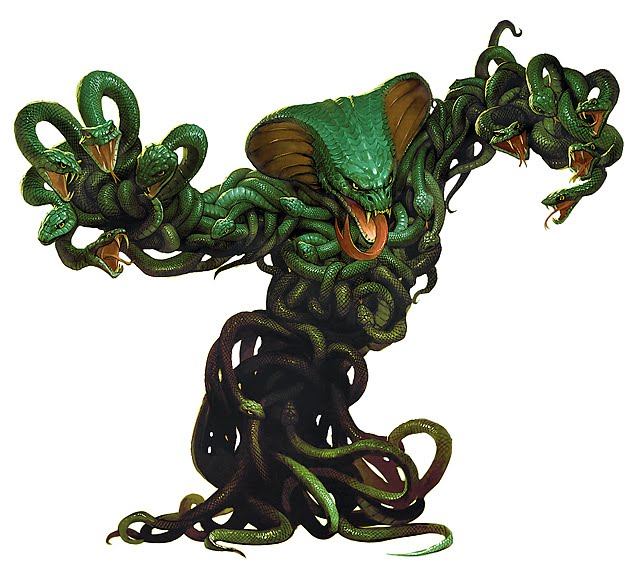 But then when you’re impossibly huge and made of snakes, it’s kind of hard not to be unique even among the rest of the monster manual. 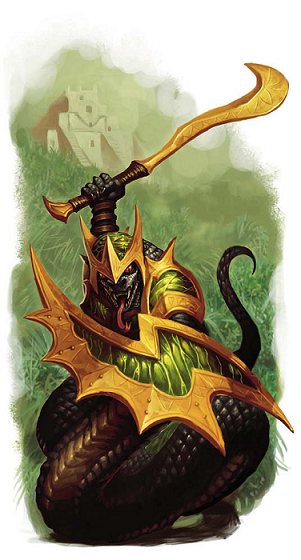 4th Edition saw more variety for the Yuan-Ti. They had five different flavors natively–each one with its own style of fighting that defined it as its own creature entry. Which is, admittedly, one of the things that makes 4th edition work–how easy it is to distinguish the way the monsters are meant to be used. Even in 3.x edition, it was easy to lose track of what the various abilities of the Yuan-Ti did at any one time.

But with 4th edition, you got the poison spell-like powers of the malison incanter, the deadly bow of the sharp-eye, and the nigh-unhittable armor class of the abomination. The Yuan-Ti Anathema makes a triumphant return as well. In 4th Edition, the Yuan-Ti were much more defined in society. They were listed as disciples of Zehir, an invading god of darkness and poison. Additionally, while the Yuan-Ti are all higher level monsters in 4th edition, their lower ranks are filled with Snaketongue cultists.

These are the humans who worship the Yuan-Ti’s dark masters… and these are the cultists that the Yuan-Ti have been seeking out since they were first introduced in 1st Edition. The Snaketongue cultists are all lower-level human, but each is given a special power that marks them as one of the servants of the Yuan-Ti/Zehir–they can all turn into a giant snake. And of course the various flavors of Snaketongue cultists all had powers that helped play up the feeling that these are a bunch of snake cultists. Some of them could use magic, others were adept assassins…basically the Yuan-Ti’s tendency to draw story to them was much more formalized in this edition.

5th Edition has been equally as kind to the Yuan-Ti storywise. Both in the Monster Manual and in Volo’s Guide, they are described in great detail–they are the remnants of a fallen empire that forsook its humanity in exchange for corrupt power that twisted their forms. They view the transformation into a Yuan-Ti as a means to attain power–and that one can eventually become powerful enough to devour and replace one of the Yuan-Ti gods, if they so choose.

Ability-wise, the Yuan-Ti become a lot more like their 1st Edition counterparts. They are streamlined and simplified–though they are given enough of a mechanical role to fill to make them easy to use and construct encounters around. Abominations are the heavy-hitters who constrict opponents. They make multiple attacks and create fear.

Malisons are shapechanging scouts and spies who can use their ability to turn into a medium sized snake to great effect. When they engage in combat, they use their hybrid bodies to bite and poison their foes. And the Purebloods remain the weakest, even if they do gain a magical poison attack that they can use at will. They are, in almost all other ways merely human.

Volo’s Guide continues on the theme and brings back a lot of elements that had gone missing across the editions. You’ll recall some of the Yuan-Ti being able to coat themselves in acid, or the classic turn the sticks to snakes action of sticks to snakes from 1st Edition–well these are back as individual powers you can use to customize the way your Yuan-Ti play out.

And there you have the Yuan-Ti. The perfect blend of pulp and sinister magic and snakes. Fighting these guys it’s impossible not to feel heroic–so if you want something that hearkens back to classic adventures, or an insidious monster that you can use to guide your players up through the levels–you’ll find what you need with the Yuan-Ti.