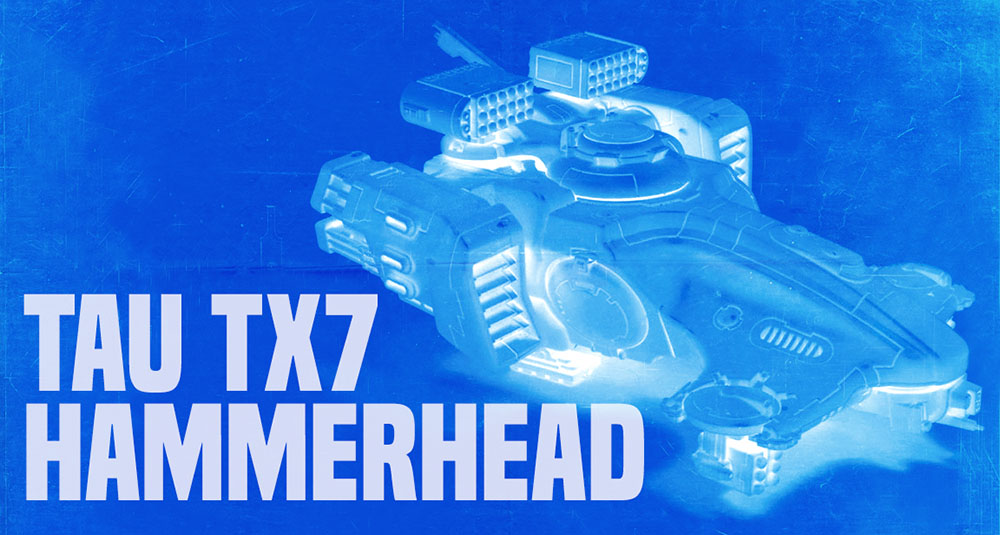 ***The below article reflects Chapter Approved 2018*** 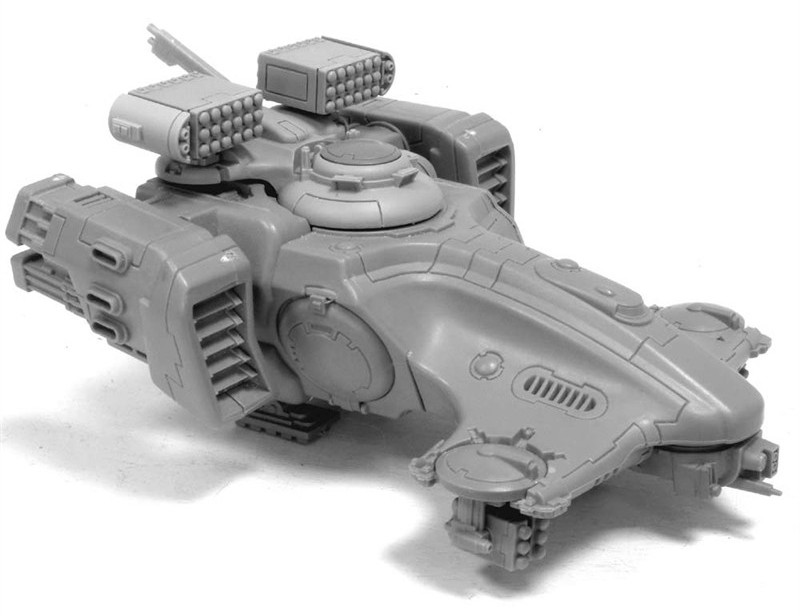 The Heavy Bombardment Hammerhead (HBHH) is really just the same Hammerhead chassis we all know and love but with a different main weapon on it. Instead of its regular armament of either Rail or Ion, the HBHH  gets to instead use a pair of High Yield Missile Pods. You don’t get a choice in the matter, that’s what it comes with and you don’t get options for the main weapon like you do with the Fire Support Hammerhead. At this point, if you’re familiar at all with the other Hammerhead variants, you could probably guess as to what the HBHH is all about but for the “tank-head T’au” newbies, we’ll list it here for completeness sake. The chassis remains the same as your standard Hammerhead. The Hammerhead Gunship is able to effortlessly glide over the battlefield, laying waste to all those in its path. In the fluff, it’s pretty great and it’s not hard to find stories of a single Hammerhead taking out 10-20+ enemy vehicles in a single engagement. Hammerhead ships, in general, make up a large part of the T’au Empires firebase with the T’au propaganda machine touting their strengths and might.

On the tabletop, a Heavy Bombardment Hammerhead is a single model unit, Heavy Support choice. It is accompanied by two MV1 Gun Drones. 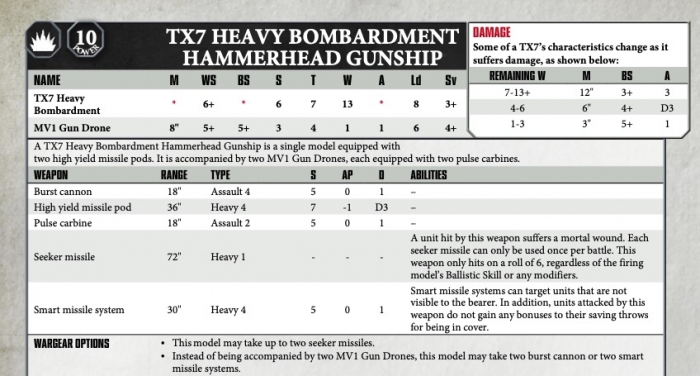 The Heavy Bombardment Hammerhead (HBHH) is very similar to the stock and Fire Support Hammerhead (FSHH) primarily because the chassis is identical. Just like the FSHH, the HBHH saw a price reduction in CA2018 which is much appreciated. The main and only distinction lies in the available main turret weapon, the two high yield missile pods (HYMP). At 36″ S7 AP-1 D[D3], the HYMP’s are not bad. They can be quite effective against lower strength infantry models and even pose some danger to transport-level vehicles who are normally at T7 or lower. By swapping the Gun Drones for the smart missile system (SMS), you will be able to negate cover bonuses on just about anything either from the AP-1 from the HYMP or the cover negation bonus that the SMS confers. The ability to take seeker missiles is typical for T’au as well as good, so you should always be taking them. 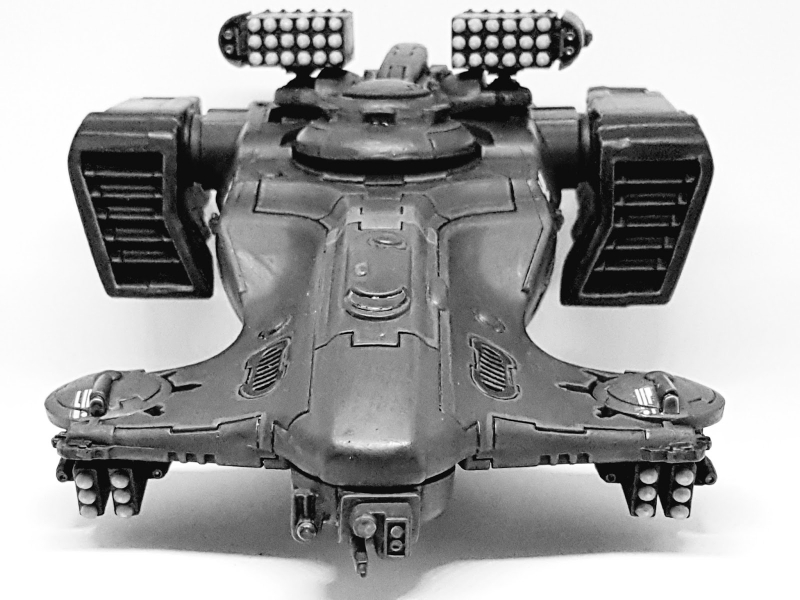 But here is where we start running into problems. At just AP-1, the HYMP’s struggle to get past many heavier targets’ armor save. And if you’re spending the whole game, or at least the whole time the HBHH is alive (more on that later) just shotting at GEQ’s then odds are that you won’t make up your points and the D[D3] will be largely wasted. At 190 points fully loaded (chassis, 2 HYMP’s, 2 seeker missiles, and 2 SMS’s) you’re going to struggle to kill enough infantry to make this unit worth it. Didn’t I just say that HYMP’s weren’t bad? That’s because the other T’au unit that can take them is the Broadside and can also take an Advanced Targeting System (ATS) that gives it an additional -1 to AP for a resultant of AP-2. This, along with the numerous benefits that <Battlesuits> have (which the Broadside is of course), results in the HBHH being a vastly inferior choice when the Broadside (a unit that just received a huge discount in CA2018) exists. The Broadside can be taken in units of up to 3 so nearly three times the firepower, the entire unit can receive rerolls of all failed To-Hit rolls (Command and Control Node), rerolls of all failed To-Wound rolls (Kauyon), AP-2 (ATS), still take a seeker missile each, AND be protected with Savior Protocols. Compare this to the HBHH’s ability to receive +1 To-Hit (effective BS2+ from Longstrike being nearby) and reroll all failed To-Hit rolls (Kauyon) and it’s impossible to make a case for the HBHH. Not to mention that a single fully loaded Broadside is 126 points to the HBHH’s 190. Yeah, you could try and take a parking lot full of nine Hammerheads, three of each variant, along with Longstrike to really eke out that Lonstrike synergy, but it’s like trying to polish a turd. The T’au Codes is written with such strong benefits to <Battlesuits> that you’d have to be a fool to disregard them – and taking an HBHH instead of a Broadside is just hamstringing yourself. 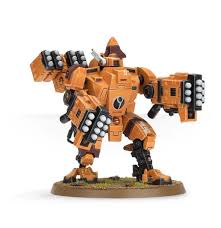 There’s just absolutely no reason to take this when the Broadside does nearly everything the HBHH does, but better. The Broadside even has two SMS’s. The HBHH suffers from bland rules and lack of distinction to the point that it honestly might as well be just another part of the FSHH. There’s no legitimate reason that I can think of for it to exist on its own, besides filling pages in a book. I’m sorry there’s not more to say, but that’s really the bottom line.

Should your T’au opponent decide to take an HBHH, the same rules apply to it as do apply to the other Hammerhead variants: you just shoot it. Any old las cannon or similar will do because those types of weapons will usually have enough range to reach out and touch the HBHH. Plus, the HBHH only is T7 and Sv3+ with no invulnerable save so it’s definitely possible to completely or nearly-completely negate any chance of armor save and wound it pretty easily. Any S8 and above gun will give any Hammerhead reason to pause.

All Hammerheads have the <FLY> keyword so you will not be able to just tag it in close combat and shut down its shooting like other vehicles. Also like other vehicles, its presence in close combat is nonexistent so you will have no trouble damaging it in close combat with a dedicated close combat unit. Just make sure you factor in all the other T’au units within 6″ of it and their For the Greater Good ability. It’s also worth mentioning that the HBHH, nor the regular Hammerheads from the T’au Codex have For the Greater Good special ability, though Longstrike himself does. T’au does also have a stratagem to let a <Vehicle> hit on overwatch on 5’s, so remember that when you charge this and any other T’au vehicle.

The point reduction seen from Chapter Approved 2018 was welcome, but the fact that the Broadside also saw a point reduction results in the HBHH being an inferior choice. If you want to be able to run a fun all tank T’au list, this is an okay unit for that. However, the HBHH suffers from the same drawbacks as the other Hammerheads suffer from, namely a comparatively weaker stat line and reduced resiliency, not to mention that it is straight up inferior to the Broadside in terms of firepower and resiliency. With so many great buffs and stratagems for <Battlesuits>, it’s impossible to justify taking the HBHH.

~Why on earth would you take an HBHH over a Broadside?