Abidan the Keeper is a Skorne Exalted Immortal solo on a small base. Like other Immortals he is a construct model that generates a soul as if it were a living model. 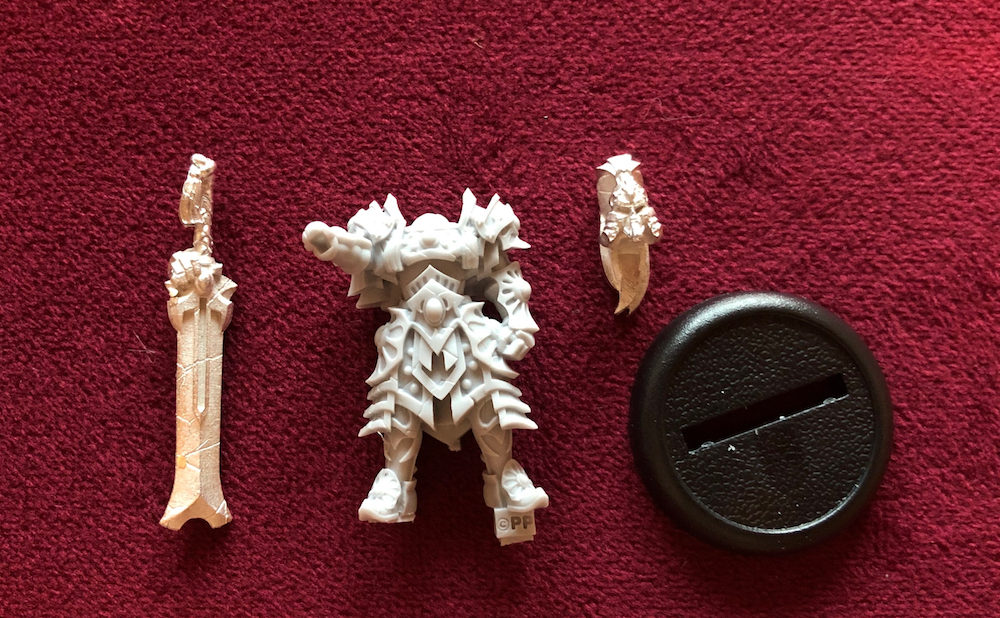 Take a look at Abidan’s rules, then let’s discuss. 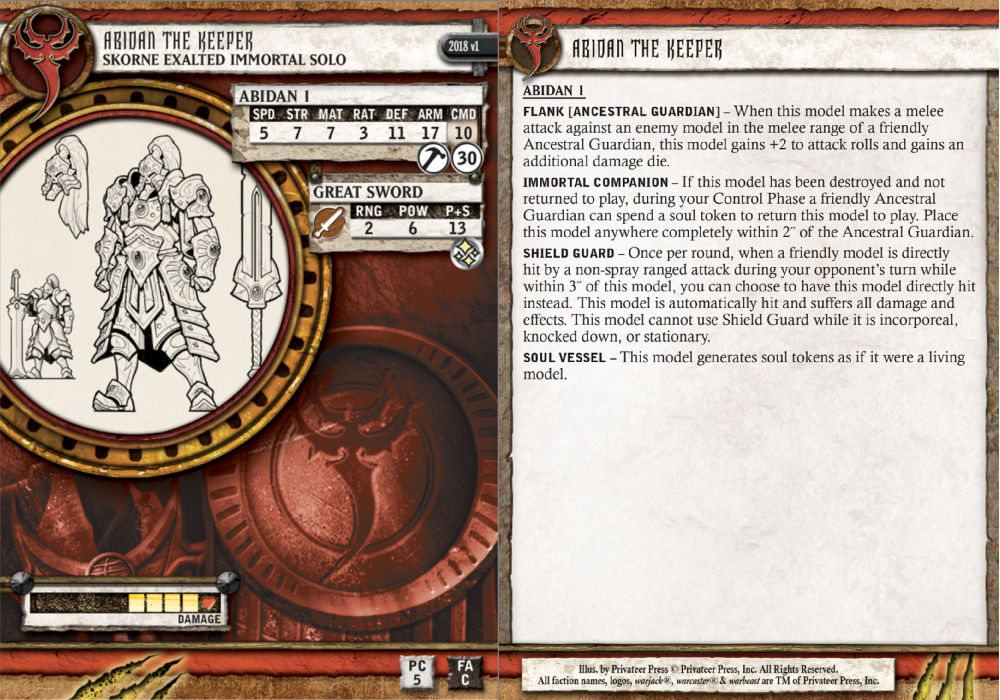 Base Stats and Combat Ability

Abidan shares several stats with his Immortal brethren at DEF 11 and ARM 17. Abidan does clock in at 1 SPD higher than most Immortal models, which will be easy to forget when playing him.

POW 13 on the sword is standard for an Immortal, but Flank[Ancestral Guardian] gives him +2 to hit and an additional die. This is as close as Immortals get to having a weapon master and makes Abidan one of the harder hitting Immortals on the board. Unfortunately he doesn’t have a way to make multiple attacks during his turn, so you’ll want to make that attack count. If only there was a way to bring him back so he could keep attacking all game….

The Immortal Companion rule is what makes him a unique and powerful piece. If Abidan is destroyed, any Ancestral Guardian model can spend a soul during the Control Phase to bring him back! Given that Abidan generates a soul when he dies thanks to Soul Vessel, this ability doesn’t really cost anything. Unlike most recursion, Abidan gets a full activation and doesn’t have to sacrifice movement or action! 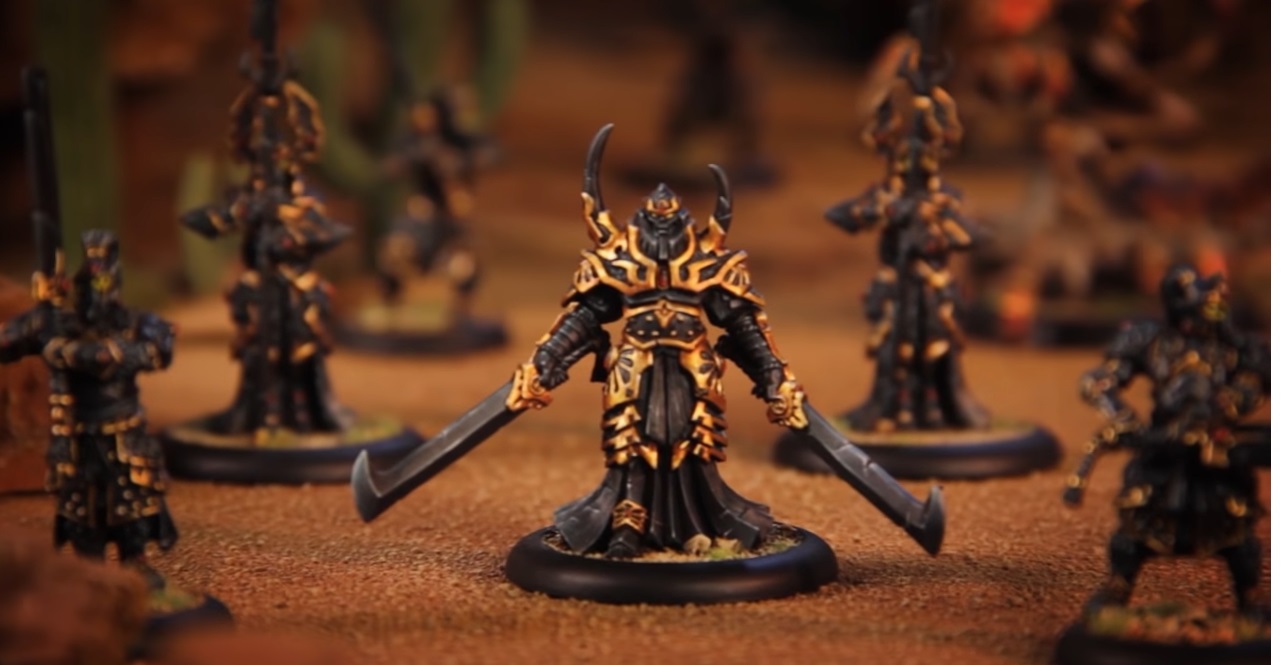 Abidan looks to safeguard those around him and this is represented with the Shield Guard rule. At ARM 17 and 5 boxes he can take a decent hit. Even if he does die it’s not a problem as you can just bring him back next Control Phase, effectively making him a free Shield Guard each turn.

Abidan has one major predator, Remove From Play. Any effect that RFPs Abidan will stop him in his tracks.

Casters or abilities that prevent soul collection can also make it harder for Abidan to return, but these usually have some counter play(like stepping out of the control range of that effect). If your opponent can’t RFP or prevent souls, they will be forced to kill all the Ancestral Guardians on the table to stop the Abidan recursion train. 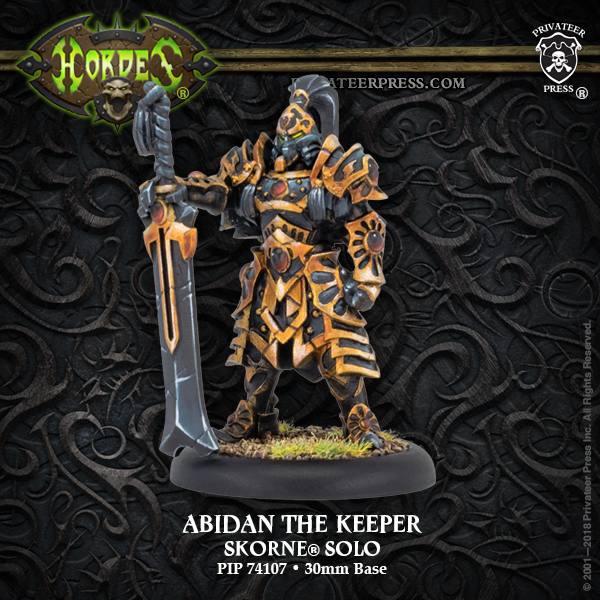 The Exalted theme is already a known force in the meta and Abidan makes for a very interesting option when building an Exalted list. A free shield guard, hard hitting solo and ridiculously good recursion are sure to get Abidan on a tabletop near you.

Do you think Abidan will start popping up in some Exalted Skorne lists?