40K: 5 Things We Want To See From The Adepticon Seminar

Adepticon is here, and soon GW will be making their big announcement. What will they show? What do we hope to see? What do you hope to see? Let’s talk inside!

It’s beginning to look a lot like Adepticon, and that’s as close as I can get to referencing music of that holiday before Labor Day, according to the musical accords of the Geneva Conventions. So not wishing to suffer another bout in front of the war crimes tribunal, let’s move on to the matter at hand: GW’s studio seminar, wherein they’ll make all the other big announcements that they haven’t made yet, and that they won’t make at a later date down the road.

There are a few, very specific announcements we’ll see that will surely get us all laughing and larking about in anticipation of the next big thing to spend our well-earned money and free time on, because that’s the way Capitalism works, and despite what your incredibly alarmist friends on social media might have you think, we haven’t overthrown capitalism yet–though they probably say it’s democracy as though the two are somehow incontrovertibly tied together, which they’re not, but let’s not get caught up in those details.

Because the real important thing is what little plastic bits will we have the chance to buy next? Here’s what we’re hoping it will be.

Alright, let’s hit the ground running so to speak. First up, we have a brand new army. It has happened before–the Adeptus Custodes, aka the Golden Boys aka your army has how many wounds? were a brand new faction. And Genestealer Cults have been overhauled enough that they’re almost a new faction–we’re hoping to see something really creative come out of the Imperium Nihilus. GW is already flirting with it, introducing new Specialist Detachments and sub-factions like the Crimson Fists or the Renegade Legions; not to mention, mini-codexes like the Elucidian Starstriders or the Gellerpox Infected. We realize the odds are long on this one–there’s not a lot that it could be at the moment. But we’re holding out hope just the same.

Following that, there’s a serious imbalance right now–Guilliman is the only Primarch representing the forces of Order and…well not exactly justice. Or good. I mean the Imperium is pretty evil when you get right down to it. But–he’s the only one repping the lesser of five evils, and if things go poorly on Vigilus and the Imperium truly does get cut in half and start another phase of a galaxy-spanning war that will change everything, then it’s the perfect time for someone like Lion El’Johnson to stop hanging around with Oscar Wilde and instead step back up to the forefront of the battlefield, especially since it’s been a while since the reveal that he’s not actually dead, just…waiting…has dropped. Let’s not leave that gun on the mantlepiece. 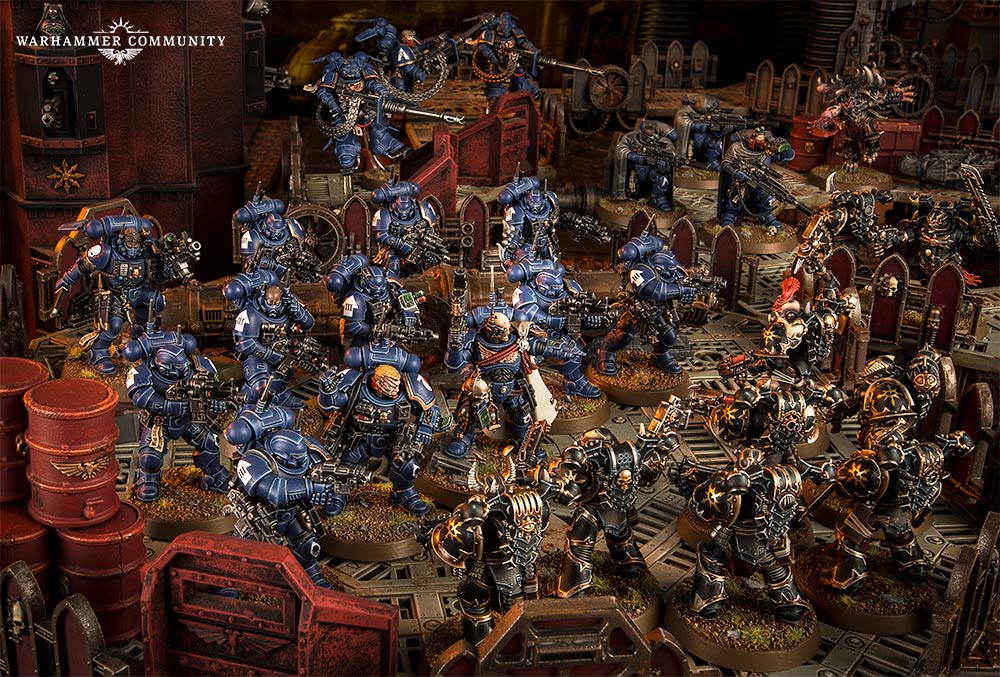 Okay we’re mostly putting this one in here so we’re right about something. Whether this is a Primaris Codex update in the same vein as Chaos, or a new regiment of them (now that GW seems to be quietly maneuvering them to do everything normal Marines can do but better), but it’s likely that we’ll get some news about the Imperium’s literal poster boys right now. 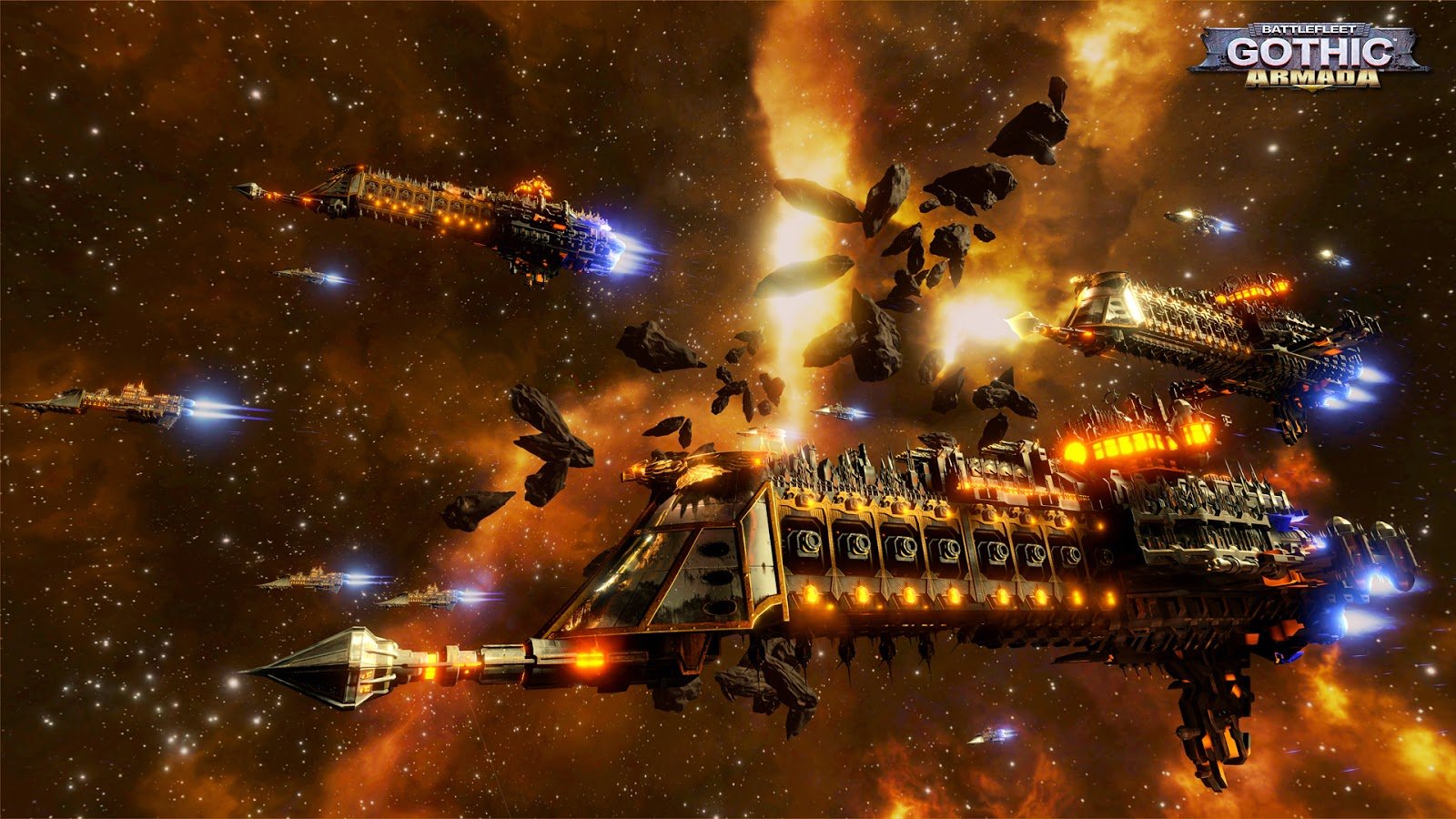 GW and Forge World have been putting out a ton of specialty games. Between Kill Team and Necromunda Underhive and Adeptus Titanicus and Blackstone Fortress and the other ones nobody plays anymore because you can buy the models they were initially a part of separately, you’ve got a lot of the lore covered. It’s all stuff people want to play–giant mech battles, tacticool squad based competitive games, games where you hilariously fall to your death in the underhive–and on that same note, there’s nothing about awesome space battles that wouldn’t move models.

One only has to look at how well Battlefleet Gothic Armada 2 is doing to see that there’s an audience out there, waiting to dive into delicious naval combat in the 41st Millennium (well 42nd now, technically).

A Threat To The Status Quo

Between Chaos ramping up and all the new Primaris, it feels like it’s all building to something. We’re hoping that we get a sign of where the tension is pushing. It’s not that it has to resolve, just that we’d like to know it’s going somewhere. Whether it’s an escalation of forces, an introduction of a new Imperium Nihilus faction that’s made up of those cut off from Holy Terra and the light of the Astronomican–or something. We’d like to see a sign that the narrative is moving, and what it’s moving towards.

And now that we’ve listed what we’d like to see–but the real question is, what are you hoping to see? We pass the question to you, dear internet…

What are you hoping to see from the Adepticon Preview? Let us know in the comments!

Author: J.R. Zambrano
Bell of Lost Souls Staff Writer and DM, J.R. covers RPGs of all stripes and on occasion eats sandwiches. You can ask him about either at [email protected]
Advertisement
Adepticon Editorials Games Workshop Warhammer 40k
Advertisement 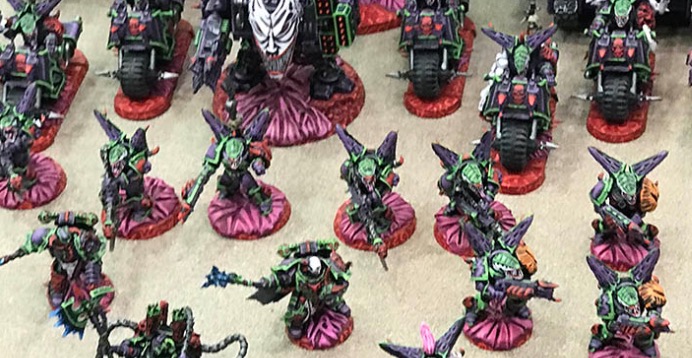