Not much of a preamble here. Other than, this is probably a sure sign that Shadowspear is coming next weekend, so look for the announcement sooner, rather than later. But it’s exactly what it says, here’s a look at a bunch of the new units included in Shadowspear. Autocannon Primaris, Infiltrators, Eliminators, and most importantly a new Primaris Lieutenant! It’s all here. Let’s get right to it. These particular images were found on Imgur via user Hotrod192 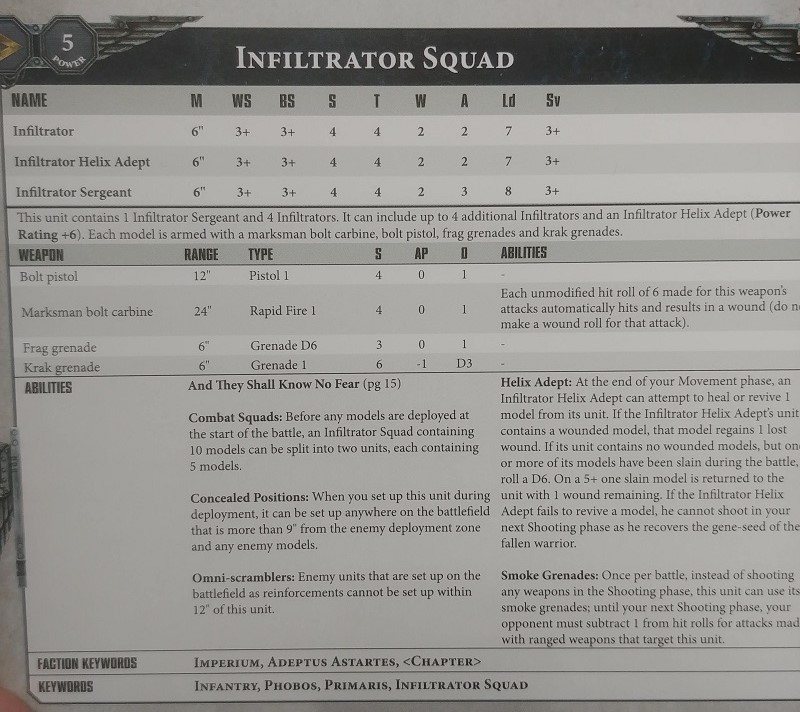 The Infiltrator Squads benefit from concealed deployment and come with their own apothecary in the Felix Adept. With Smoke Grenades they’re basically a Rhino but without the benefits of moving fast, blocking charges, and basically being the best unit in the game until Knights showed up to ruin everything. Interestingly the new Marksman bolt carbines have been redesigned to be better bolters. They’re rapid fire, so they benefit from Bolter Discipline and now they auto-wound on a natural 6. 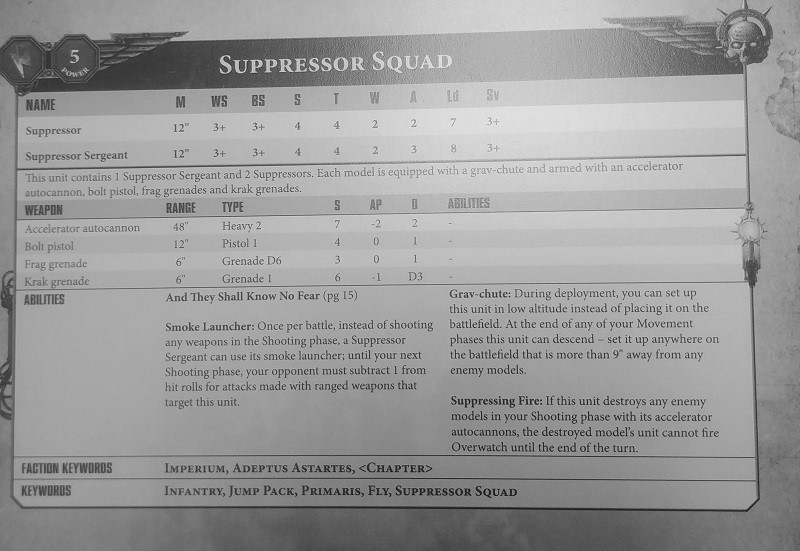 Suppressor Squads have a spicy autocannon–and with their grav-chutes they can always be ensured to have a shot at their targets. Suppressing fire might make these a worthwhile backup troop if you’re firing into massive mobs that need to get charged. 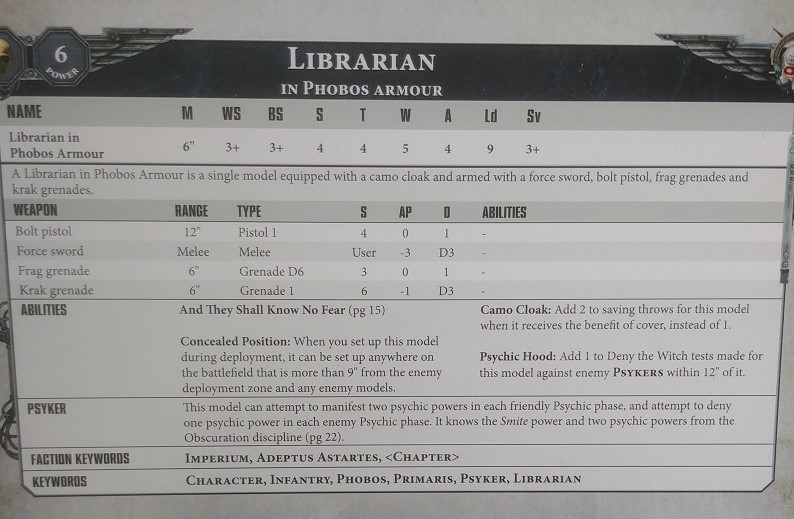 The Librarian in Phobos Armor means that it’s not just for Captains. Phobos Armor must be the source of their Concealed Position abilities, which is great because having a deep striking Librarian can ensure they pop up where you need them. But the real detail to focus on here is the new Obscuration Discipline — as well as the fact that the Shadowspear book is at least a 22 page book. 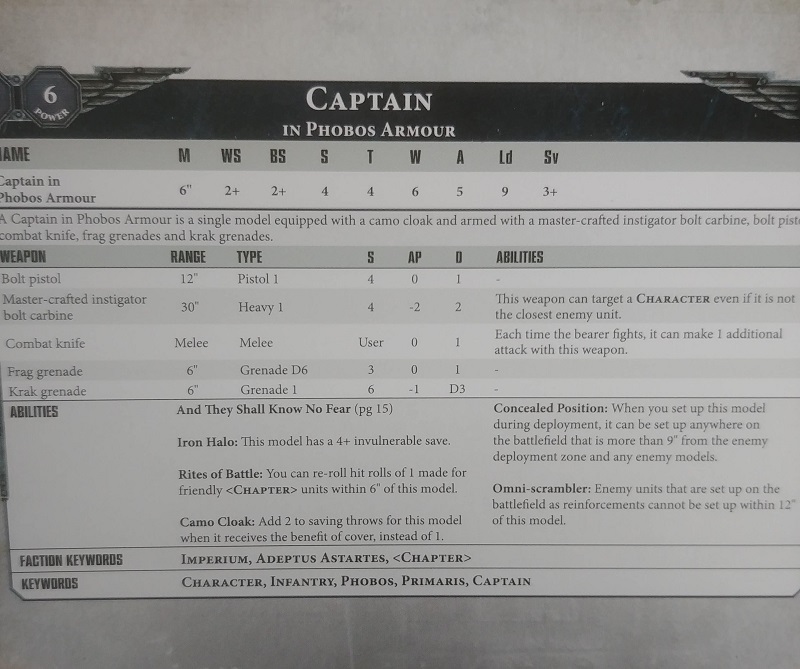 Here we have a look at the Captain in Phobos Armor. His bolt carbine won’t benefit from bolter discipline, and he can target characters at will. And with a 2 damage shot, that means most of your characters are going to be at a 50/50 shot of taking 2 wounds. Dunno how worth it that is for 6 power level or ~120 points. 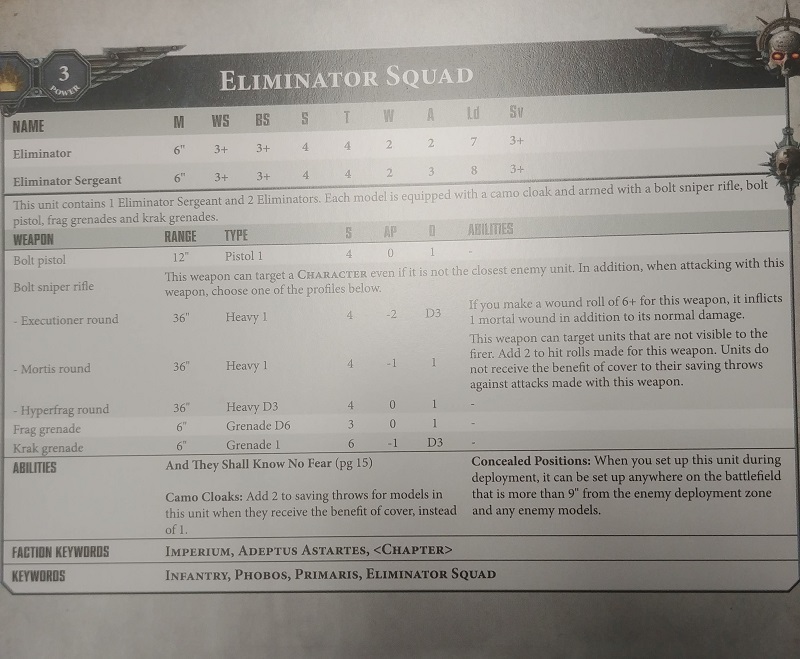 Eliminator Squads are those Primaris Snipers we saw a while back. They’re expensive, but they at least can put some reliable fire on characters. You get 3 in a unit instead of one, and the Mortis and Executioner rounds seem like they’ll make for shenanigans. 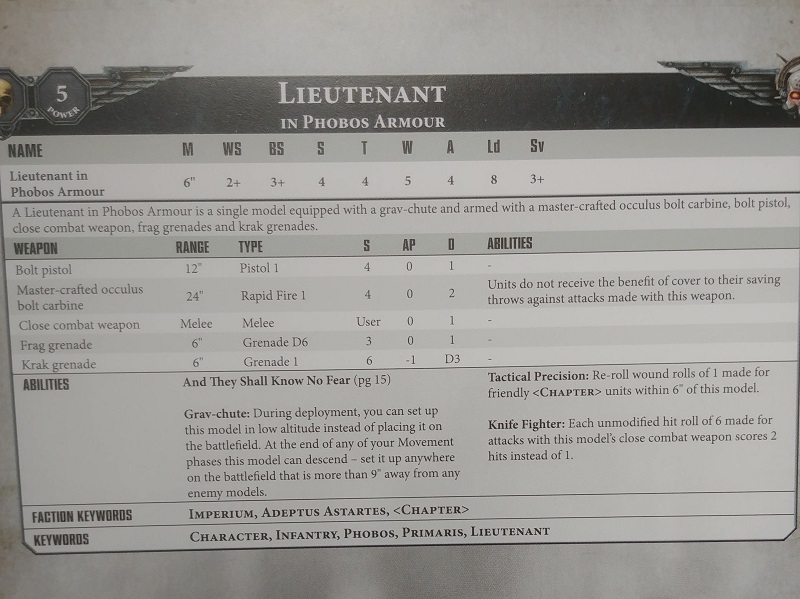 You must have known by now that we’d get a Primaris Lieutenant in this boxed set. It wouldn’t be a 40K Astartes box if it didn’t introduce at least one new Lieutenant model. Still, that Oculus Bolt Carbine is pretty sweet.

And that’s what’s new for the Primaris in Shadowspear.

What do you think of the new rules? And the expected points cost? Too much? Too little? On brand? Have at it in the comments!

Author: J.R. Zambrano
Bell of Lost Souls Staff Writer and DM, J.R. covers RPGs of all stripes and on occasion eats sandwiches. You can ask him about either at [email protected]
Advertisement
Rules Space Marines Tabletop News Warhammer 40k
Advertisement 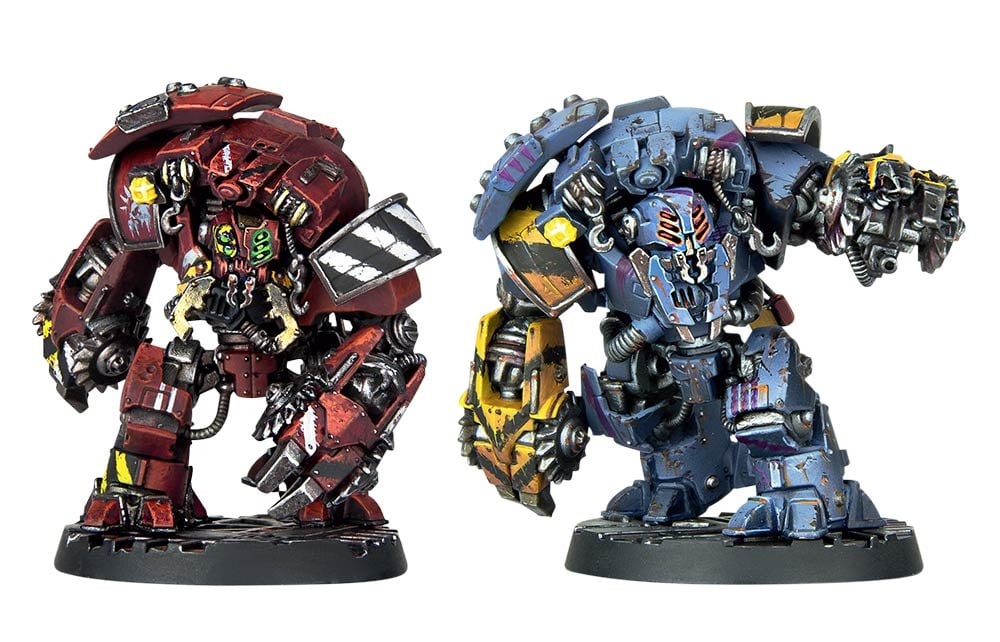