The Blades of Khorne are getting an update in AoS and 40k – what does that mean for the forces of Chaos?

Let’s just get this out of the way first: sorry worshipers of Slaanesh, no news for you (yet). It does kind of sting that Khorne has basically gotten 3 Battletomes in AoS before you’ve even gotten a “real” book. Wrath and Rapture was a nice start but Slaanesh is missing some follow through. That said, with the new Khorne releases, this bodes well for 40k Chaos players. 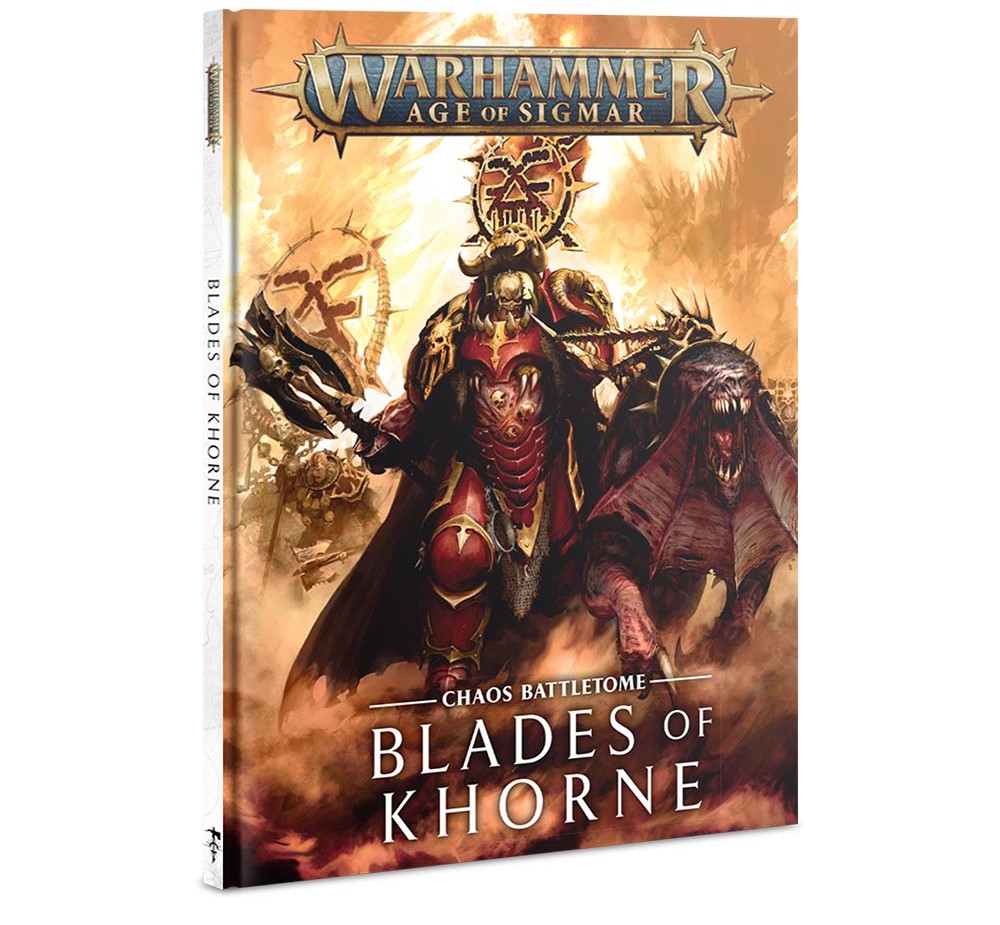 “But what does a AoS Battletome have to do with 40k?” Well, that’s a fair question. The thing we all should know is that Daemons cross-over between 40k and AoS. Any time one game gets an update to their model range, GW almost immediately releases rules for those new models in the other system. For a recent example, Wrath and Rapture featured rules for both 40k and AoS inside the box. New models/units =  New rules for Daemons; That’s just how GW does it. 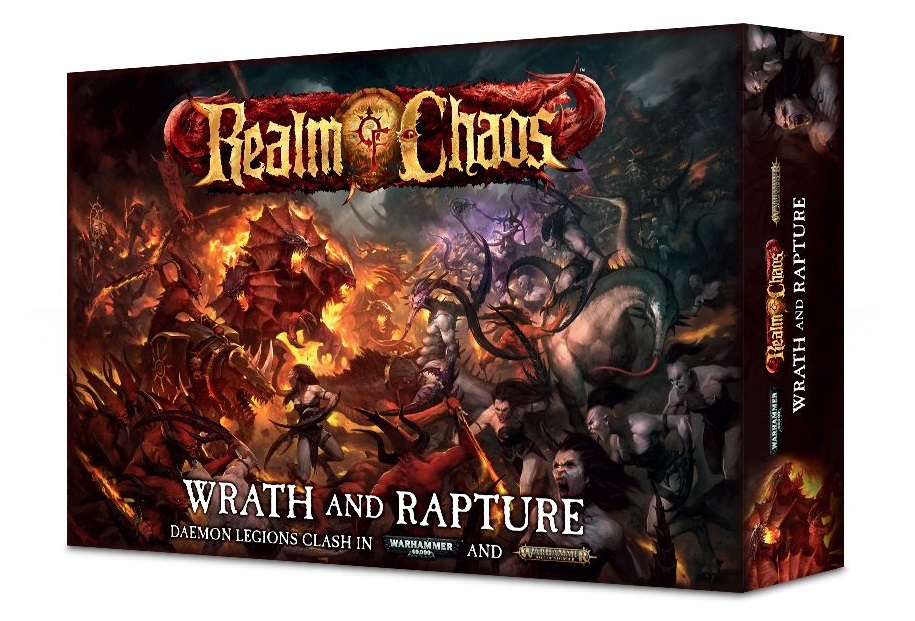 Now looking at this new AoS release it’s easy to see we’re getting a few new models/units for the Daemons of Khorne. Aside from the new Skulltaker we’re also seeing a Bloodmaster and the new Skull Altar. We’ll have to see if the Judgements of Khorne cross over or not. That’s probably up for debate (although we doubt it). 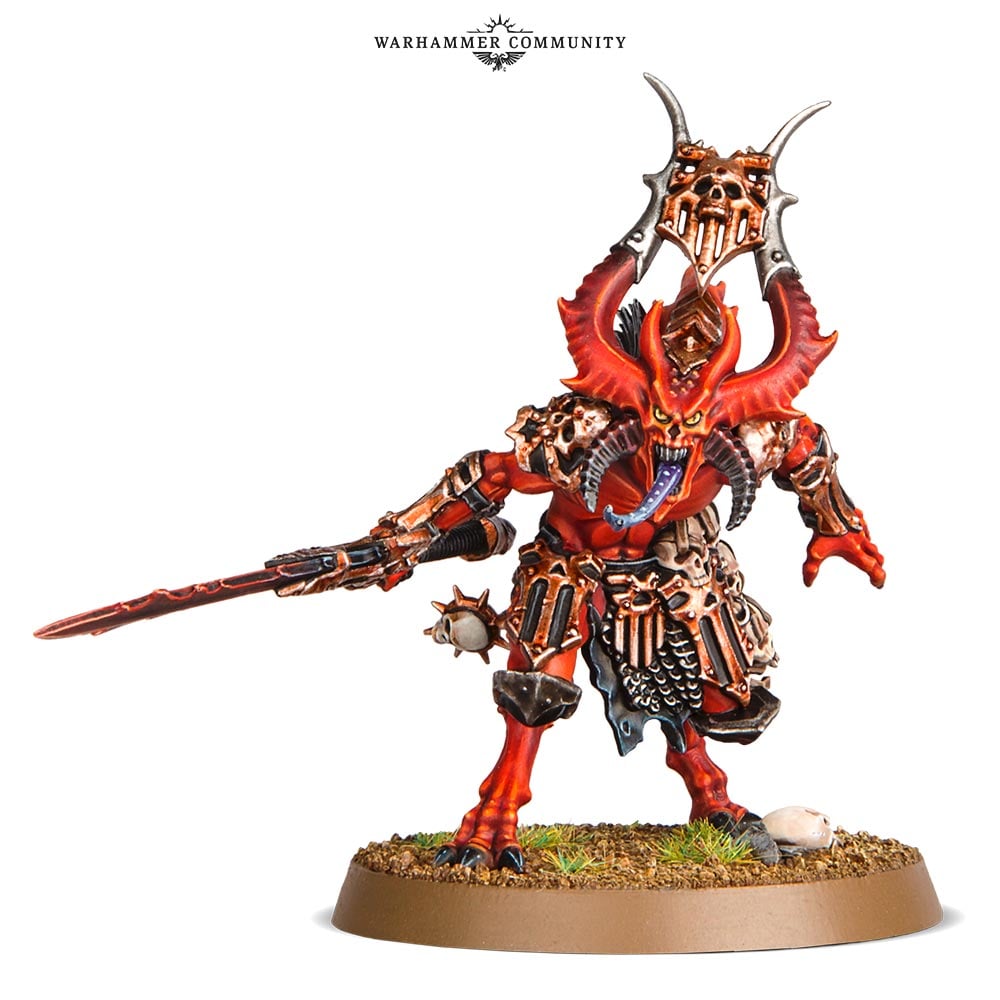 We also got new rules/models for Karanak and the Fleshhounds when Wrath and Rapture released. It might be time that GW puts all those new rules for Khorne’s followers into another 40k Chaos book. Just tossing that out there.

Another facet of this release is that we have to look at the overall timing of the release. Why did GW drop a Khorne release in the middle of the Vigilus arc? We all know Vigilus is the current thread that is being pulled at – we have a new book on the way plus a brand new Abaddon model as well as a bunch of OTHER miniatures that have been teased and not yet revealed. 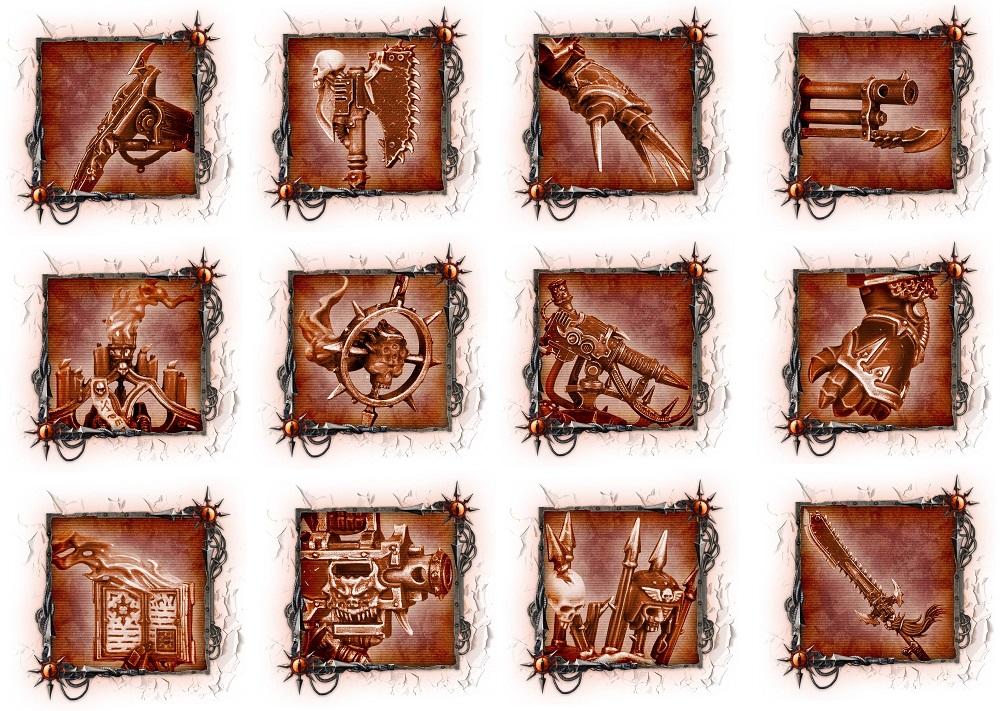 Games Workshop does enjoy teasing folks with these type of things. Plus you know how they like to show stuff off in the artwork. Well, along with the annoucenment, GW also tossed out this artwork in the post: 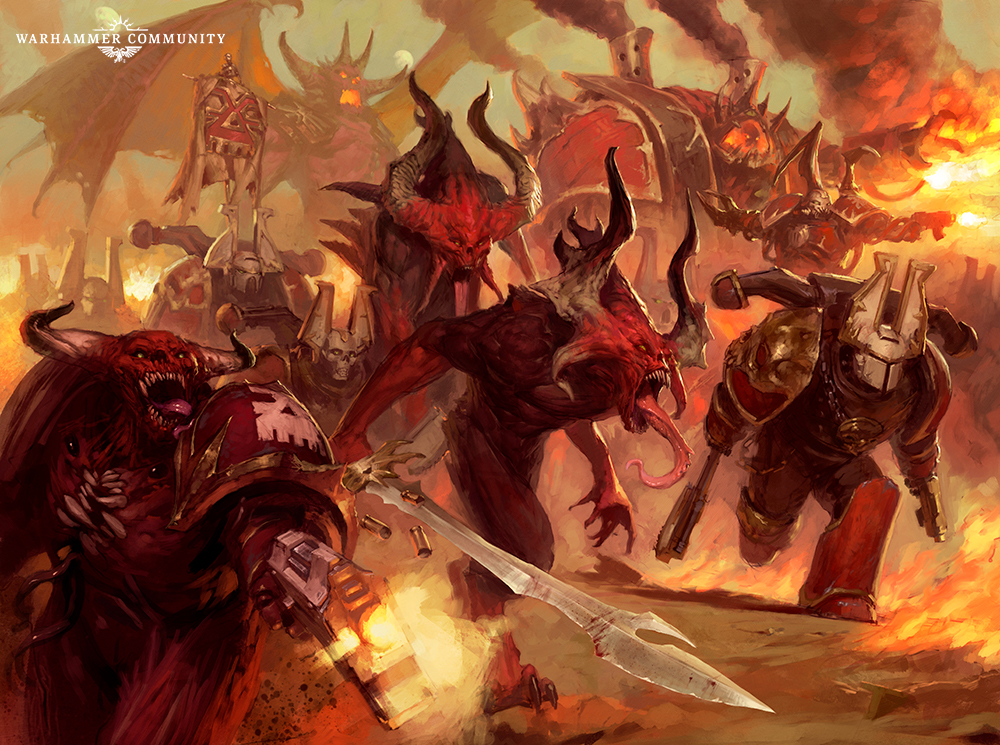 Not only did they hint at “Loads of the new Khrone releases will be usable in your Warhammer 40,000 Chaos army…” we know that Vigilus Ablaze will have all the rules for the new Skulltaker, Bloodmaster and the Skull Altar. This timing is simply because Vigilus Ablaze is going to feature new Khorne units and therefore had to have a new Battletome for AoS.

But look at that artwork for a moment. Why would GW pull this piece out once again? Sure, it’s got Bloodletters and a Bloodthirster in the background as well as a Hellbrute. But it heavily features Possessed and Khorne Berzerkers. And since when did Possessed use Bolters? Maybe it’s just artistic license. But that still doesn’t explain the Khorne Berzekers. I, for one, have really been hoping we’re getting a new kit for them.

Please, can we get some updated Berzekers?

The other piece of evidence I’d like to submit is that GW released a recommended list for the forces in the Shadowspear box: 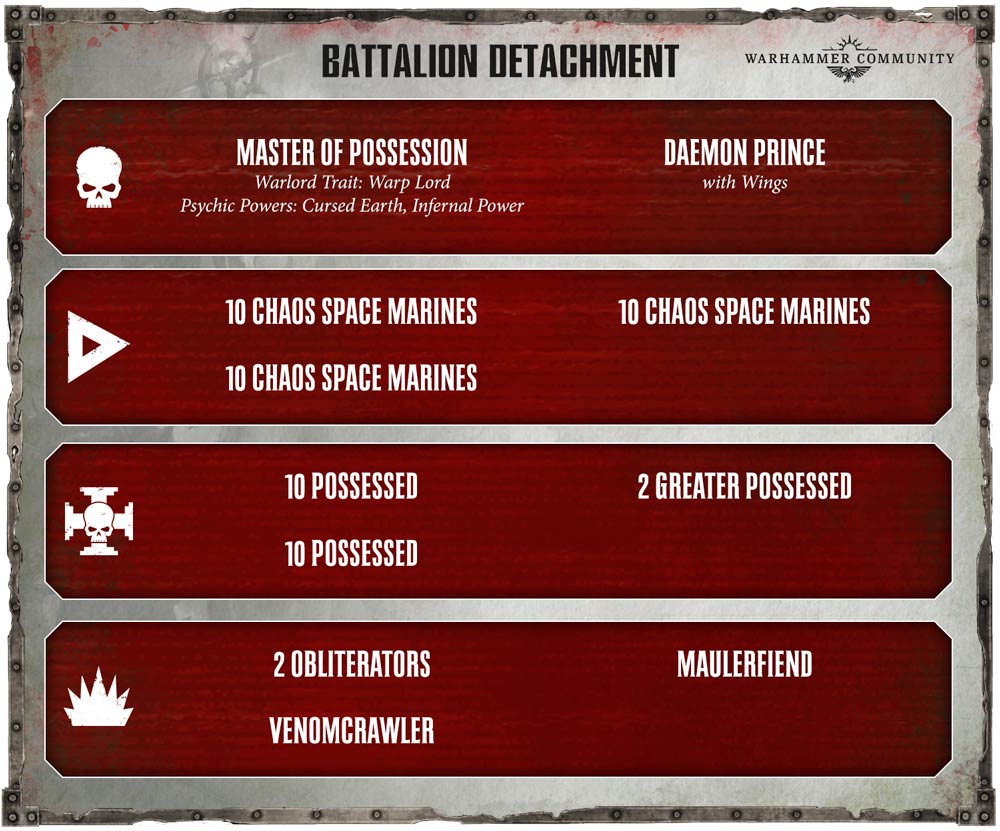 This Chaos one is…not my favorite. What really stuck out to me was the 20 Possessed. Look, I get that 2 Greater Possessed are there and there is a theme they are going for. But I still wouldn’t recommend this list to a new player if I wanted them to actually enjoy the game. But what if GW knows that there are changes coming for the Possessed? We might not be seeing new models but I’ll gladly take a rules update to make them better.

We’ve got a lot of speculation going on here and I get that. But it seems awfully convenient that all this Khrone stuff just happened to coincide with the middle of the Vigilus campaign arc, a massive Chaos 40k release, and a boat load of new miniatures that have been teased but not revealed yet. All we know for sure is that Khorne is getting a handful of new models and new AoS Battletome, and Vigilus Ablaze will feature more rules for those units. But the week is early and GW has at least 3 more teasers planned:

It’s going to be a good week for Chaos overall. Sorry Slaanesh, maybe next time?

Goatboy's 40k: How Good Are Daemonkin and Chaos Marines 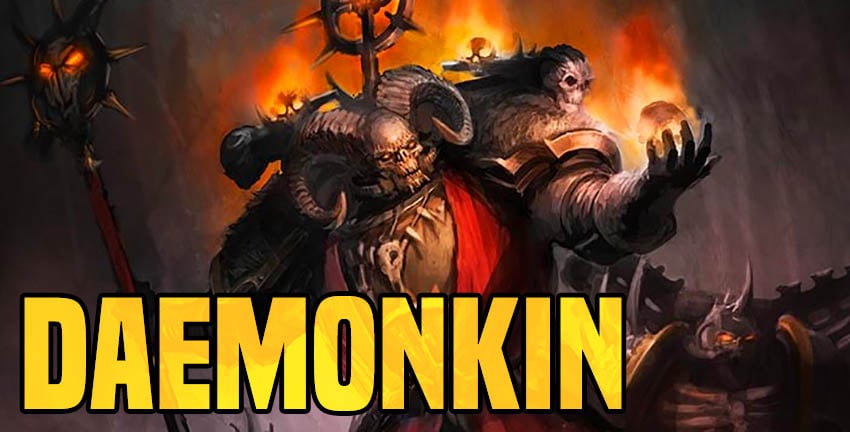