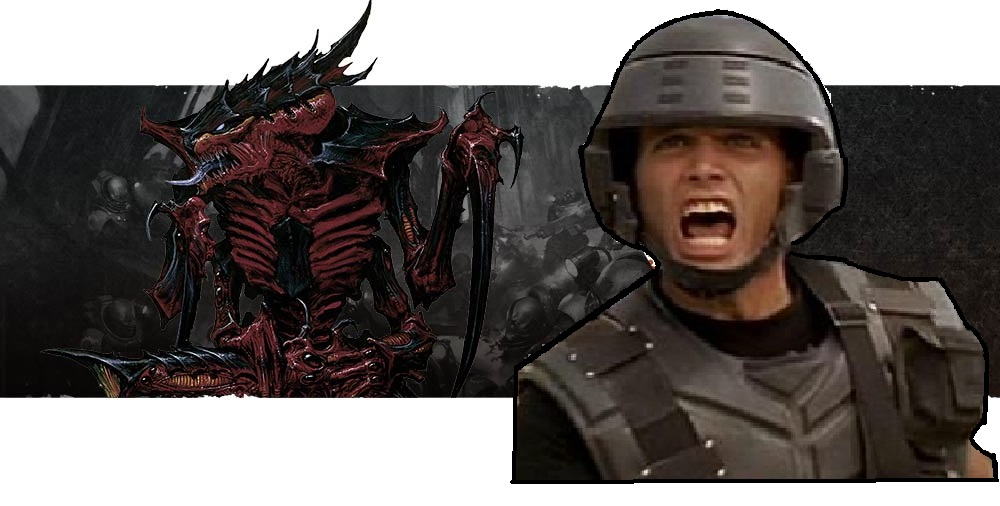 It’s time for another visit to the crossroads of Pop Culture and Warhammer 40,000 and this time the Tyranids are in the crosshairs.

Welcome to another Pop-Khorne where we take a look at some movies that really capture the essence of something from the Grimdark universe of 40k. Today we’re diving into one of my favorite subjects: Tyranids! There are TONS of movies out there that have been inspirational to me for my Tyranid army and I going to share the best-of-the-best with you today. So let me know what movies help conjure up the idea of the Tyranid Threat in your mind by dropping us a line in the comments. That said, let’s dive on in.

Yep. We’re starting with the movie that you KNEW was going to be on this list. I don’t think I need to explain why Starship Troopers is kicking off this list but if you haven’t seen it, this action movie is based on the book by Robert A. Heinlein which was actually written in 1959. Does it get everything right? No – but, for what it was, it did a pretty good job. Directed by Paul Verhoeven (of RobotCop Fame) it’s gory, action-packed, and visual effects driven. It doesn’t just capture the feel of Tyranids, it also pits the “totally not Imperial Guard” against them in a battle to the death. It’s basically required viewing material for fans of 40k.

Yeah, this is the OTHER movie you knew was going to be on this list. ALSO required viewing material for 40k players – this movie ALSO does a good job of pitting the “Marines” vs the Xenos threat. Directed by James Cameron (who was fresh of the success of The Terminator) this movie still holds up. The combination of plot, pacing, practical effects, action, drama, and everything about it makes this movie SOOOOO good. It takes the horror element from Alien and it injects some high-octane butt-kicking to make a movie that you can watch over and over again. Highly quotable. If you’re looking for a movie that will get you in the mindset of playing with or against Tyranids, this one is for you.

We’re going back old school with this one. At it’s core, Them is a movie about man-eating monsters who are threatening all of civilization. Back when the World was still experimenting with nuclear weapons, the effects and impacts of radiation from those nukes wasn’t entirely well known yet (other than it would kill you). This opened up the minds of Sci-fi writers and inspired lots of monster movies. This one just happens to tap into that fear by mutating Ants into people-sized monsters.

The long and short of it is that Them really captures the concept of fighting against a hive-mind. It asks the question of “what if the Ants were the size of people and could fight back?” If you’re looking for a literal classic movie, check this one out!

Pitch Black is not the movie I was expecting when I first watched it. I thought this was going to be about Riddick (Vin Diesel) fighting against some aliens in the dark. And yes, it WAS that but it is so much more. The first part of the movie is really about a group of people trying to survive on a desert planet that is constantly being blasted by the rays of it’s two suns. It kind of felt like a survival movie set in the desert. But then astronomical events line-up and the lights go out…that’s when the bugs come out to play. If Tyranids were vulnerable to sunlight then this movie would have nailed them spot on. They are a plague on locust on this planet devouring all life. Stay in the light if you want to survive…

Another action-packed movie from the 199os, Independence Day is rounding out our list because it’s all about an alien invasion. While the fighting doesn’t take place on the ground so much, it still has a lot of similarities to how Tyranids operate. First, the aliens cut off communication. Then they attack major cities – with the welcoming arms of Cultists.

They fight with a Hivemind mentality as the larger ships beam orders down to the smaller ships. And their armor is some type of organic suit. They also drain planets dry of their resources and move on. If the Tyranids were more technologically inclined this is probably how they would conduct war.

Like we said at the top, there are LOTS of movies that really do a good job of inspiring folks to play Tyranids (like Ender’s Game). Let us know your favorites in the comments!

Author: Adam Harrison
Writer, Editor, Texas Native, and Austinite for 15+ years, Adam covers all things Tabletop Gaming. Which includes Warhammer 40,000, Age of Sigmar, D&D, Board Games and everything else that involves dice, boards, cards and a table. A hobbyist, player, and collector of miniatures and games, Adam's current obsession are his Death Armies for Age of Sigmar, his Blood Angels and Tyranids for 40k, and his ever growing Arkham Horror: The Card Game Collection.
Advertisement
BoLS Games Workshop Movies and TV Pop Culture Tyranids Videos Warhammer 40k
Advertisement