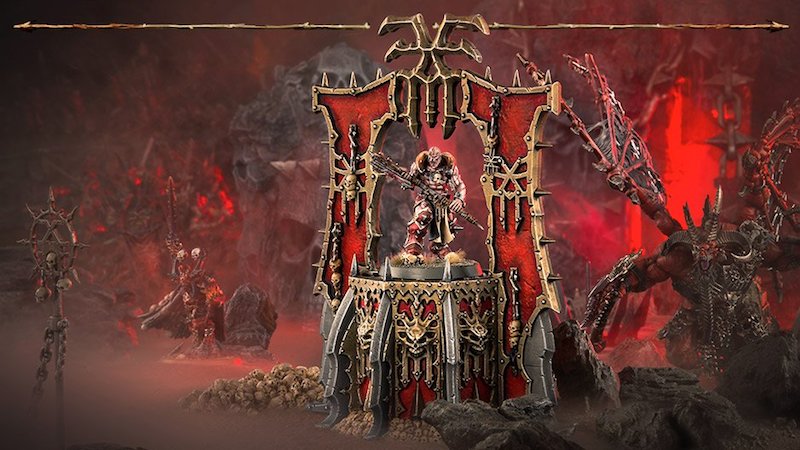 It’s the Blade of Khorne this week as they cut through the Vigilus arc and make their presence felt! New this weekend from Games Workshop. 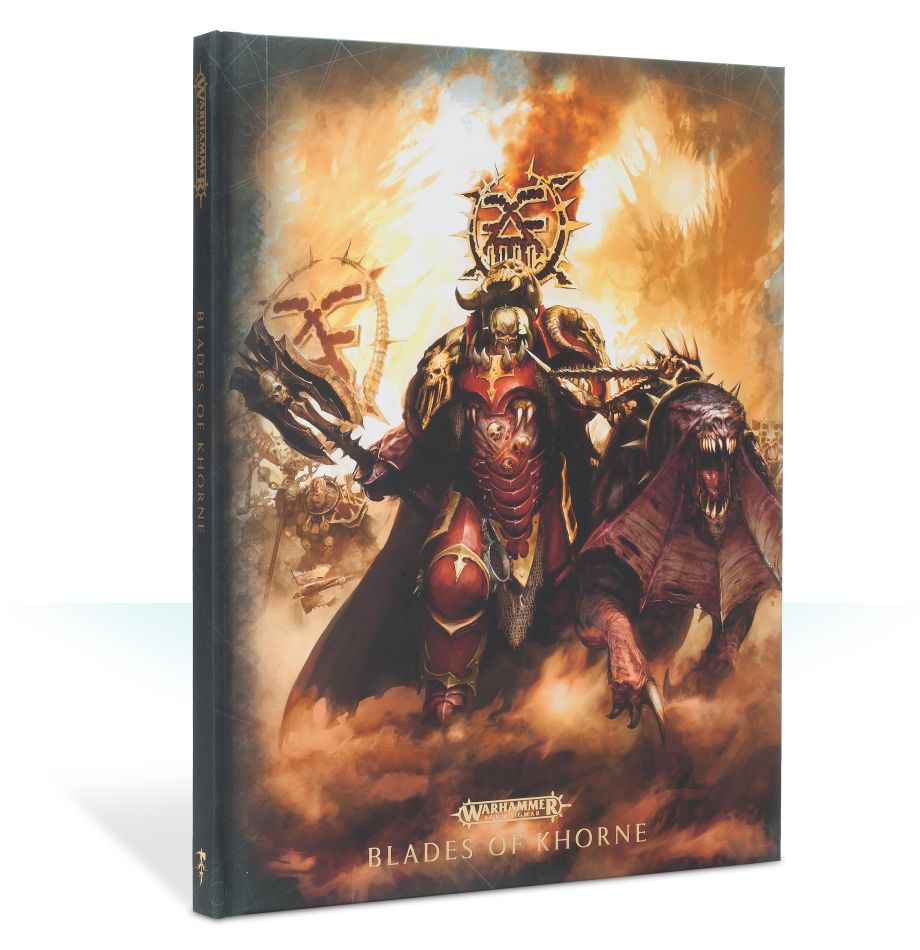 All dread the coming of the Blades of Khorne – an unholy allegiance of mortals and daemons for whom war is an act of worship.

Battletome: Blades of Khorne is your complete guide to fielding a Khorne army on the tabletop. Inside, you’ll be able to discover the blood-soaked history of Khorne’s legions through dark lore and stunning art, inspire your own collection with a miniatures showcase and painting guides and battle on the tabletop with a huge set of rules. 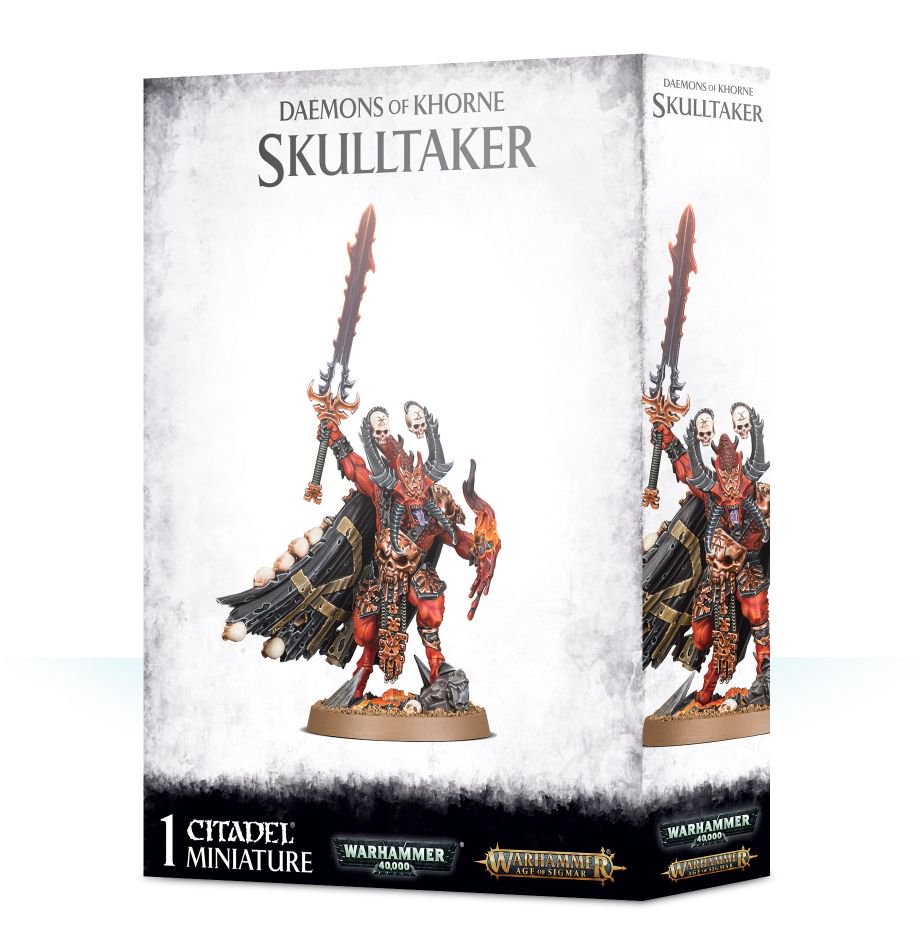 Skulltaker is Khorne’s immortal champion and the greatest of all Bloodletters. Ever seeking worthy skulls for his master, he scans the battlefield for the enemy’s greatest champion, bellowing his challenge before moving in to end yet another storied life.

Skulltaker is a savage hero-slayer. Usable in both Warhammer 40,000 and Warhammer Age of Sigmar, he’ll make short work of any of your opponent’s champions in close combat, as well as driving your Bloodletters to fight even harder.

This set allows you to add Skulltaker to your own armies. Featuring a classic Chaos aesthetic coupled with the best modern miniatures design techniques, it’s a treat for painters too, featuring all sorts of intricate details – and, of course, a lot of skulls!

This kit is supplied in 14 plastic components and comes with a scenic 40mm round base featuring pre-sculpted detail. 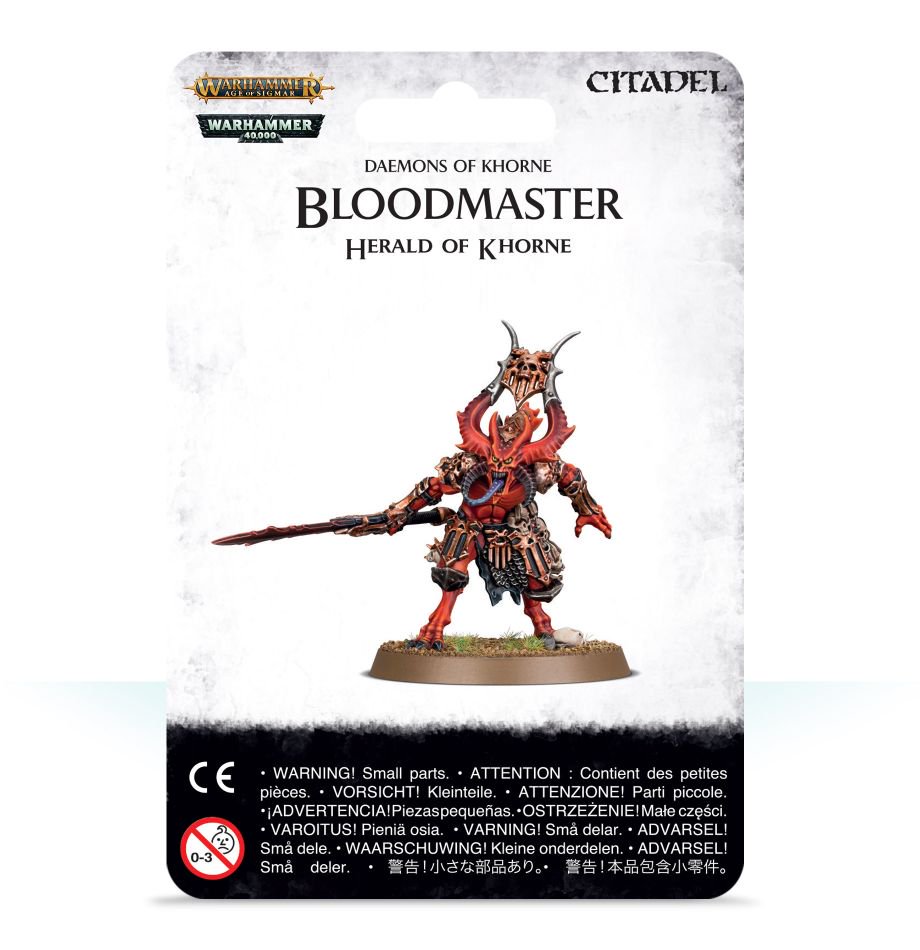 Each swing of the Bloodmaster’s blade opens throats and splits torsos, while truly worthy victims find their heads severed from their bodies. Around the Herald, the Bloodletters of Khorne fight all the harder, driven to a frenzy by his murderous aura.

Bloodmasters are a must-have in any Khorne army, whether you’re conquering the 41st Millennium or the Mortal Realms. As well as being deadly combatants in their own right, these champions of the Blood God will also make your Bloodletters even deadlier with handy aura abilities.

In this set, you’ll find everything you need to build your own Bloodmaster. Styled after the Bloodletters he leads, but larger and wearing extra armour, he’ll look right at home on the front lines of your army. 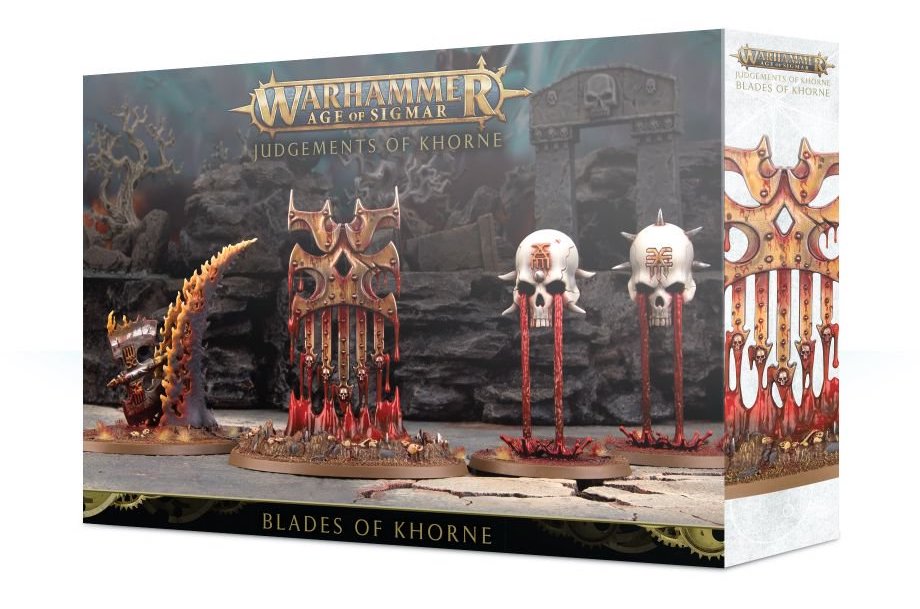 When the necroquake shook the foundations of the Mortal Realms, the barriers between the aether and the Mortal Realms were weakened. For practitioners of magic, this meant more eldritch powers were within their reach – for the followers of Khorne, who despise the arcane, it meant they could more easily draw manifestations of the Blood God’s judgements from the Realm of Chaos and send them crashing down upon their enemies.

Judgements of Khorne are the Blood God’s answer to endless spells. Summoned into battle by Khorne Priests like the Slaughterpriest, each makes a devastating impact on the battlefield. In this set, you’ll find all the Judgements of Khorne, including:

– The Hexgorger Skulls, manifestations of Khorne’s will that mess with enemy casters and rob them of spells

– The Bleeding Icon, a symbol of Khorne that can crush foes and make failed battleshock tests even more dangerous

– The Wrath-axe, a supernatural blade that cleaves through enemy units

Each of these Judgements of Khorne is a striking, eye-catching model that’ll stand out superbly on the tabletop, with unusual elements like waves of energy and pools of blood that’ll be a treat to paint.

This kit is supplied in 14 plastic components and is supplied with 2 x 60mm round bases and 2 x 105mm oval bases. 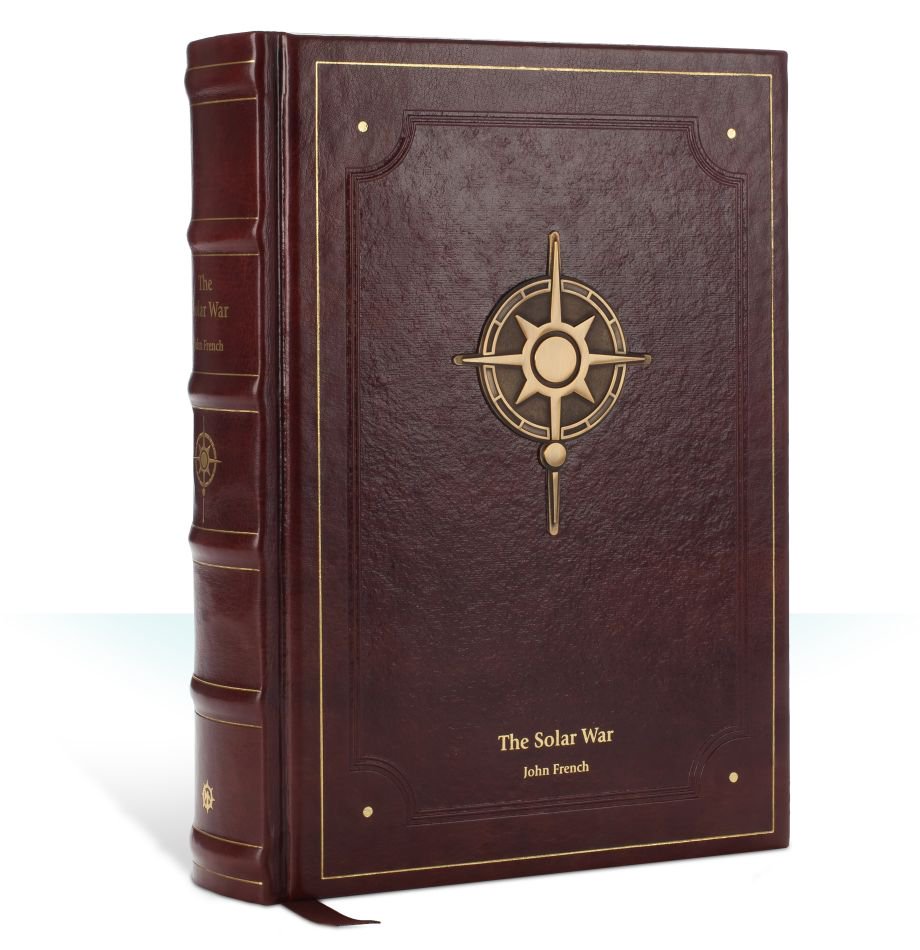 After years of devastating war, Horus and his forces have arrived at Terra. But before they can set foot on the Throneworld, they must first break the defences of the Sol system. Powerful fleets and cunning defences bar their path – but can anything hope to halt the advance of the Traitor armada?

READ IT BECAUSE
The final act of the long-running, bestselling series starts here, with a brutal and uncompromising look at the first stage of the Siege of Terra, the war to conquer the solar system. Armies will fall, heroes will rise and legends will be written…

THE STORY
After seven years of bitter war, the end has come at last for the conflict known infamously as the Horus Heresy. Terra now lies within the Warmaster’s sights, the Throneworld and the seat of his father’s rule. Horus’ desire is nothing less than the death of the Emperor of Mankind and the utter subjugation of the Imperium. He has become the ascendant vessel of Chaos, and amassed a terrible army with which to enact his will and vengeance. But the way to the Throne will be hard as the primarch Rogal Dorn, the Praetorian and protector of Terra, marshals the defences. First and foremost, Horus must challenge the might of the Sol System itself and the many fleets and bulwarks arrayed there. To gain even a foothold on Terran soil, he must first contend the Solar War. Thus the first stage of the greatest conflict in the history of all mankind begins.

ABOUT THIS EDITION
– Vinyl cover with metal centrepiece and foiling
– Curved and ribbed spine with ribbon bookmark
– Gilt-edged pages
– Colour chapter start pages
– Includes 8 pages of colour art and a concertina map
– Signed by John French
– Individually numbered from an edition of 2,500

Karanak, The Hound of Vengeance $35 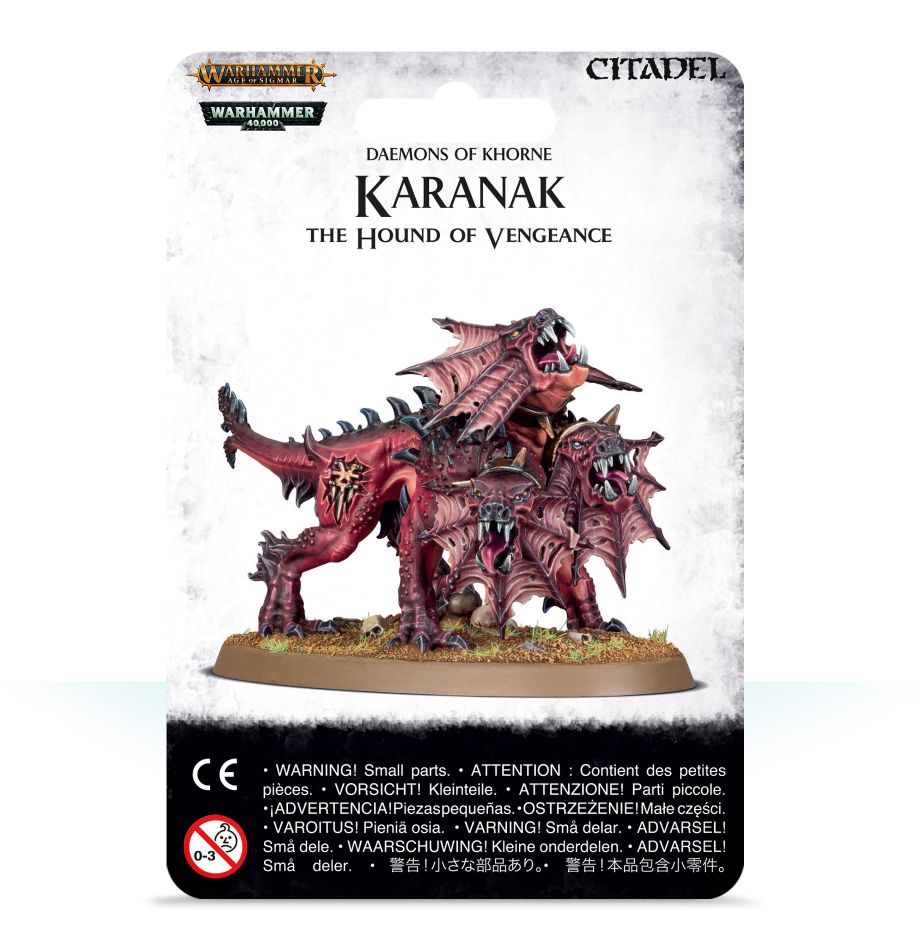 Ever watchful, ever hungry, Karanak is the physical manifestation of the Blood God’s wrathful vengeance. Once he has the scent of his quarry, this tireless predator will not cease in his hunt until he tastes their torn flesh between his fangs.

As a Daemon, you can use Karanak in both Warhammer 40,000 and Warhammer Age of Sigmar. Regardless of which system you use him in, he’s a deadly hero-hunter, who can tear apart even the most durable foe with ease. Capable of denying psychic powers and dispelling magic, he’s great at countering any coward who’d hide behind foul sorceries!

This set allows you to build Karanak, the Hound of Vengeance for yourself. This three-headed hound will look great alongside your other Flesh Hounds, or as a striking painter’s project. 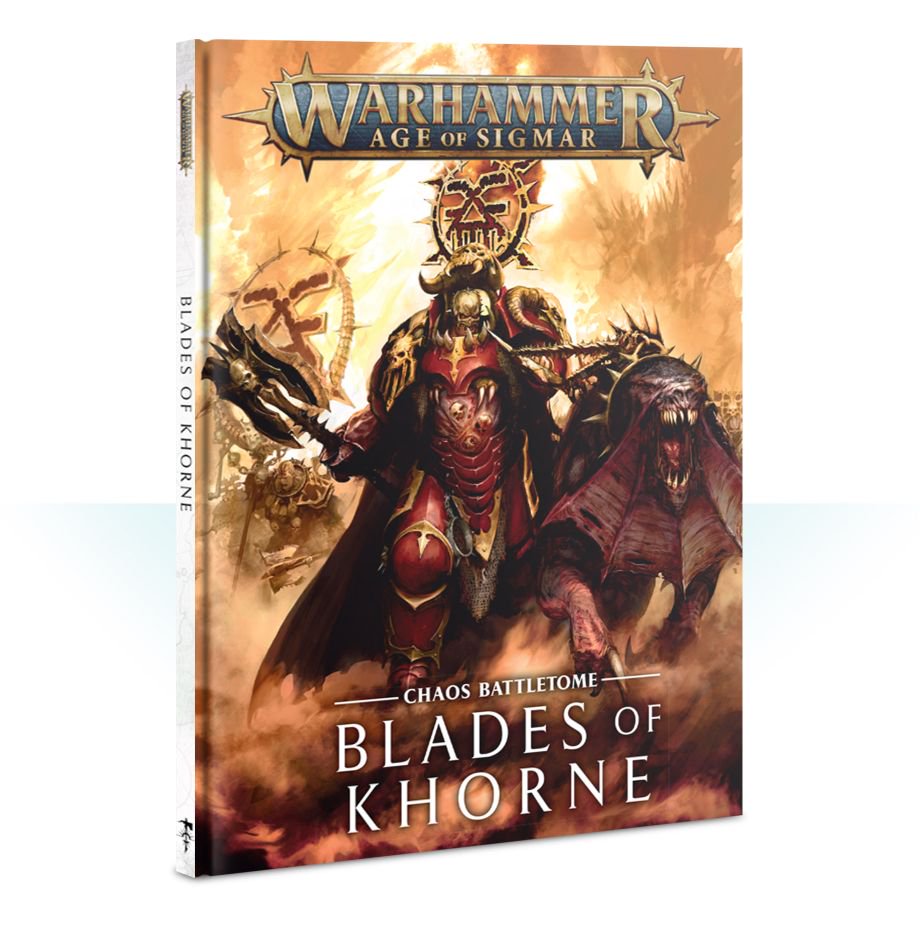 All dread the coming of the Blades of Khorne – an unholy allegiance of mortals and daemons for whom war is an act of worship.

Battletome: Blades of Khorne is your complete guide to fielding a Khorne army on the tabletop. Inside, you’ll be able to discover the blood-soaked history of Khorne’s legions through dark lore and stunning art, inspire your own collection with a miniatures showcase and painting guides and battle on the tabletop with a huge set of rules. This hardback book contains:

– A miniatures showcase showing a combination of colour schemes, single miniatures, units, and battle scenes on terrain, as well as an example army
– Painting advice including examples of banner designs, red armour, brass trim, different skin tones, horns, a variety of blades, bases, and more
– Rules for fielding your Blades of Khorne army in games of Age of Sigmar, including allegiance abilities, summoning rules, bonuses for fielding named armies with their own abilities, command abilities, command traits and artefacts of power, plus much more
– Rules for building a Khorne warband in Path to Glory
– A massive 19 warscroll battalions that reward you for fielding specific combinations of units
– 34 warscrolls, covering the entirety of Khorne Bloodbound and Khorne Daemons for easy reference
– 3 Judgement of Khorne warscrolls for the Hexgorger Skulls, Bleeding Icon and Wrath-Axe
– Pitched Battle Profiles for all units, Judgements of Khorne, and the Skull Altar featured in this battletome, including min/max unit sizes, points values and battlefield roles 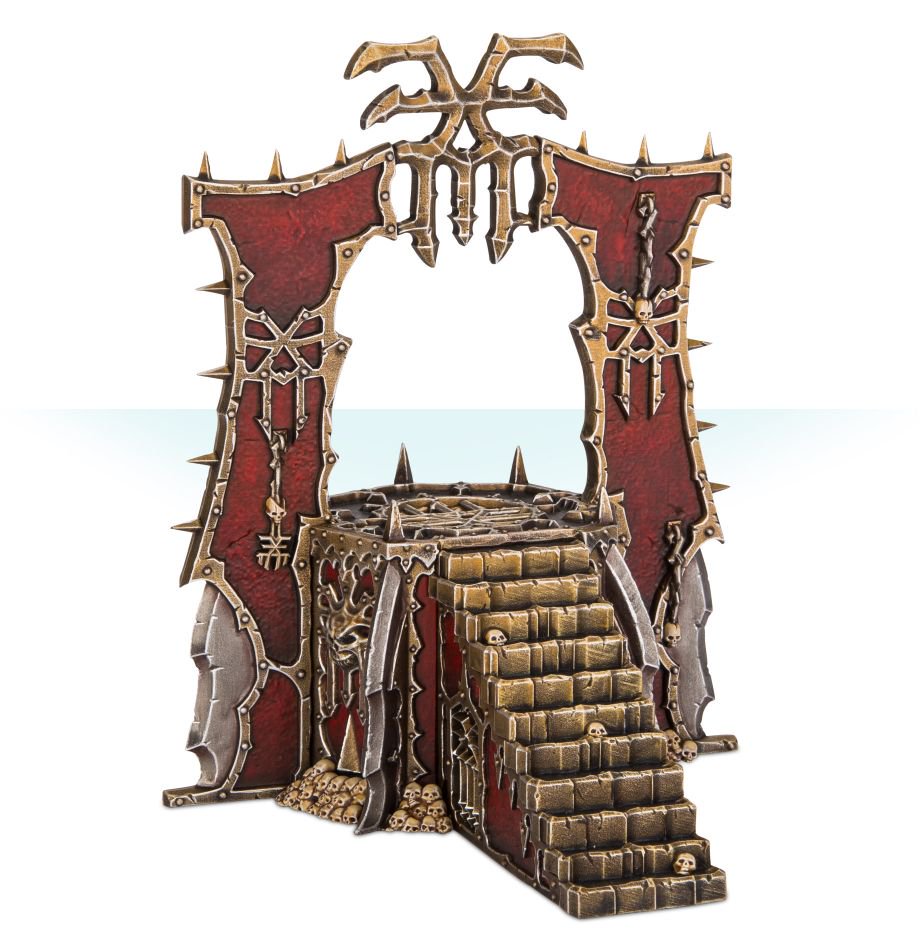 Wherever Khorne’s followers do battle they raise up Skull Altars – dread monuments from which to offer tribute to the Blood God and receive his blessings in return. Rising from the ground, the Skull Altar is formed out of the violent tributes heaped in offering for Khorne’s Throne.

Available at no matched play points cost to any Khorne army, the Skull Altar is a terrain piece that makes your Slaughterpriests even more powerful. When near it, they’ll be able to re-roll their crucial prayer and judgement rolls, allowing you to unleash your favourite Judgements of Khorne or get off key bonuses without a hitch. Meanwhile, nearby Wizards will find it harder to cast spells – Khorne has no time for those who would rely on sorcery to win their battles!

This set builds one Skull Altar. Once complete, you’ll have enough room on top to mount a Khorne Hero of your choice. Covered in baroque and grisly detail, it’s a great centrepiece to your Khorne collection and incredibly useful in game.

This set is supplied in 21 plastic components. 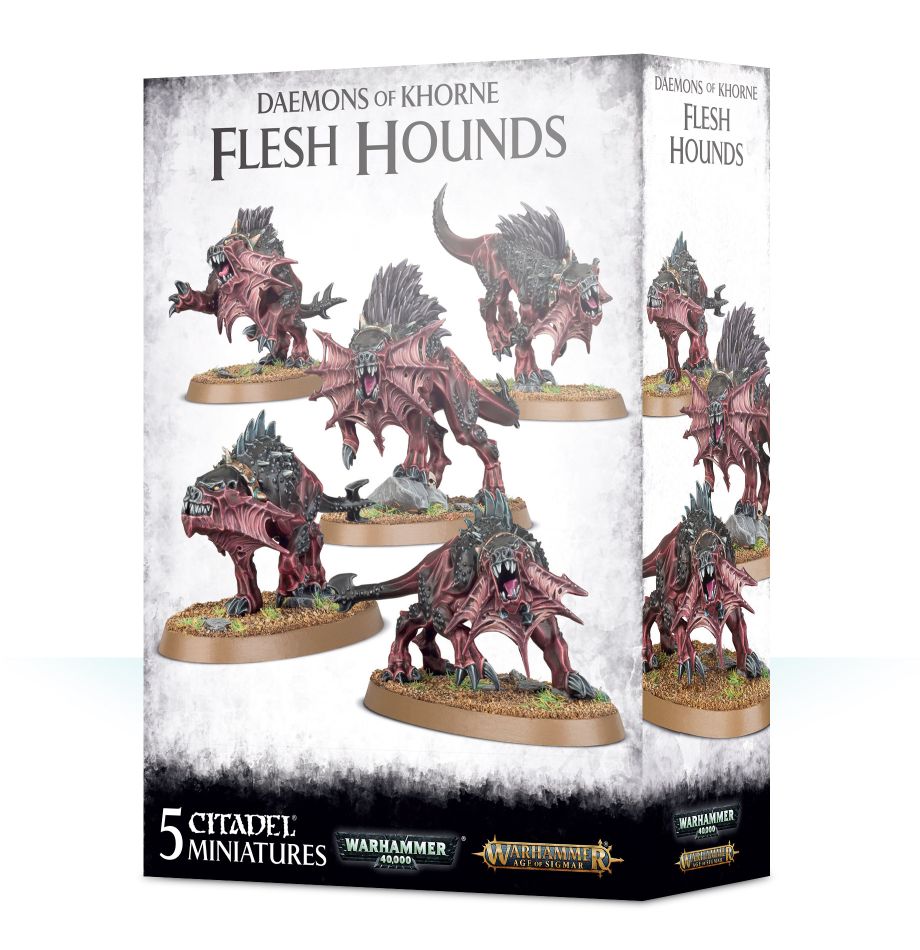 Swift, strong, and tenacious beyond mortal reason, Flesh Hounds run their prey to the ground without mercy. Those who seek to trick or destroy these daemonic beasts with sorcery find their powers flickering to nothing, extinguished by the wrath of Khorne.

Flesh Hounds are fast, deadly and especially effective at slaying those who would dare dabble in sorcery. Usable in both Warhammer 40,000 and Warhammer Age of Sigmar, they’re excellent for killing your opponent’s favourite characters or launching deadly flanking attacks.

This kit contains everything you need to build five Flesh Hounds. Each is armed with blood-dark claws and wears a collar of Khorne.

The set is provided in 20 plastic components and is supplied with 5 x 60mm oval bases. 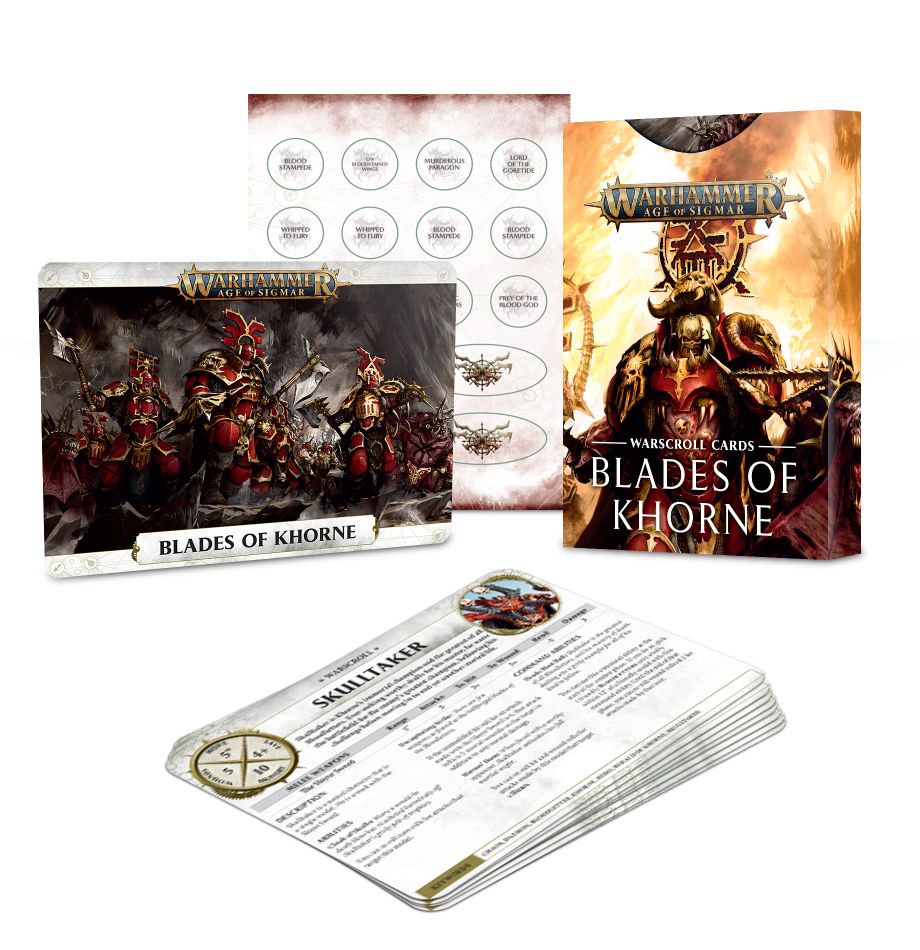 Even the most bloodthirsty warlord needs to plan properly – which is where these handy Warscroll Cards come in! An invaluable resource for any Khorne general, this set includes easy-to-reference warscroll cards for all Blades of Khorne and Daemons of Khorne units, plus tokens for keeping track of persistent in-game effects. In short, you’ll be able to spend less time flicking through your battletome and trying to remember how many Blood Tithe points you have, and more time shedding blood for the Blood God!

This set contains 37 warscroll cards, plus 2 double-sided push-out token sheets. Please note – you’ll need a copy of Battletome: Blades of Khorne to use this product!

AoS: Altar of Skulls & The Judgements of Khorne Unboxed