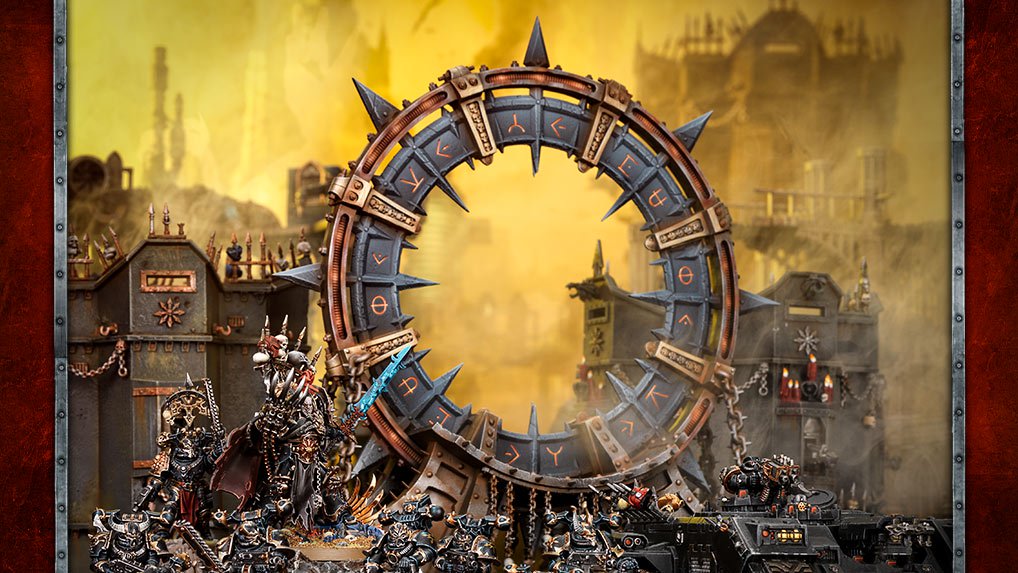 Check out the new wave of Chaos Space Marines, Abaddon, and Vigilus Ablaze goodies up for pre-order this weekend! 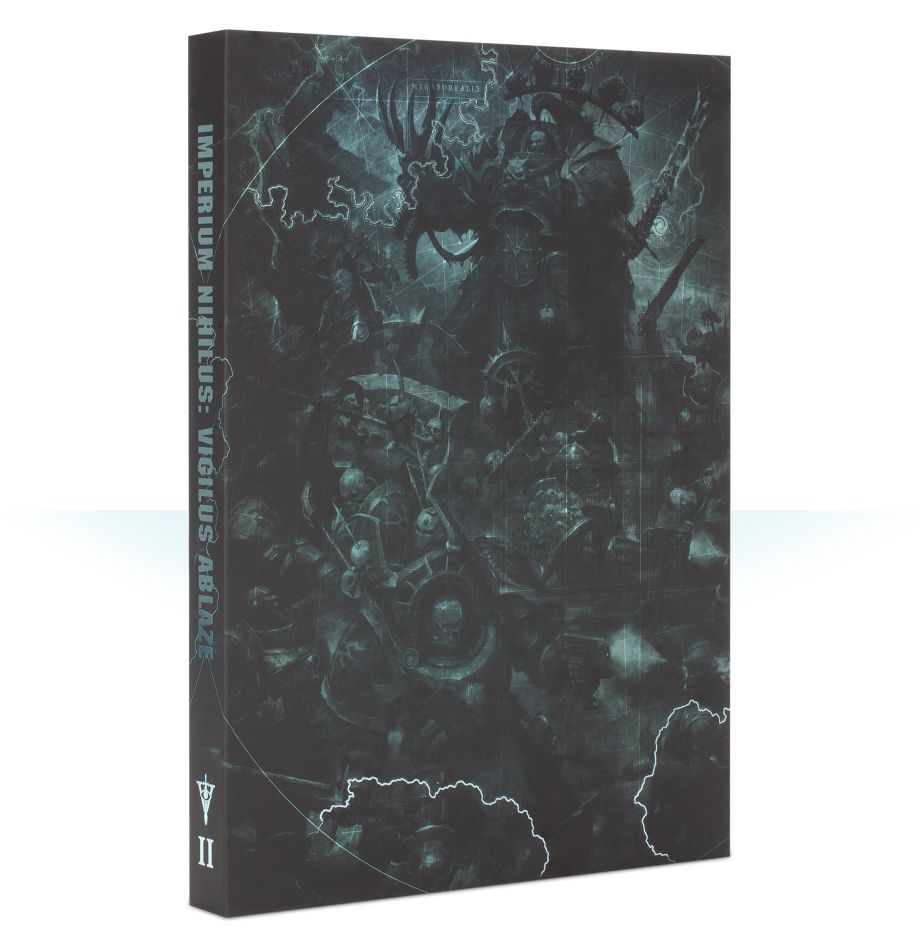 There are 1300 copies of the Collector’s Edition of the Imperium Nihilus: Vigilus Ablaze book available. Each book is beautifully presented in a soft-touch slipcase featuring the starfield of the Vigilus system. The book features a black ribbon marker and gilt page edges in a silvery blue. The front and back of each book also features a wraparound piece of art with soft-touch finish, and a spine that is overlaid with black cloth featuring the name of the book.` 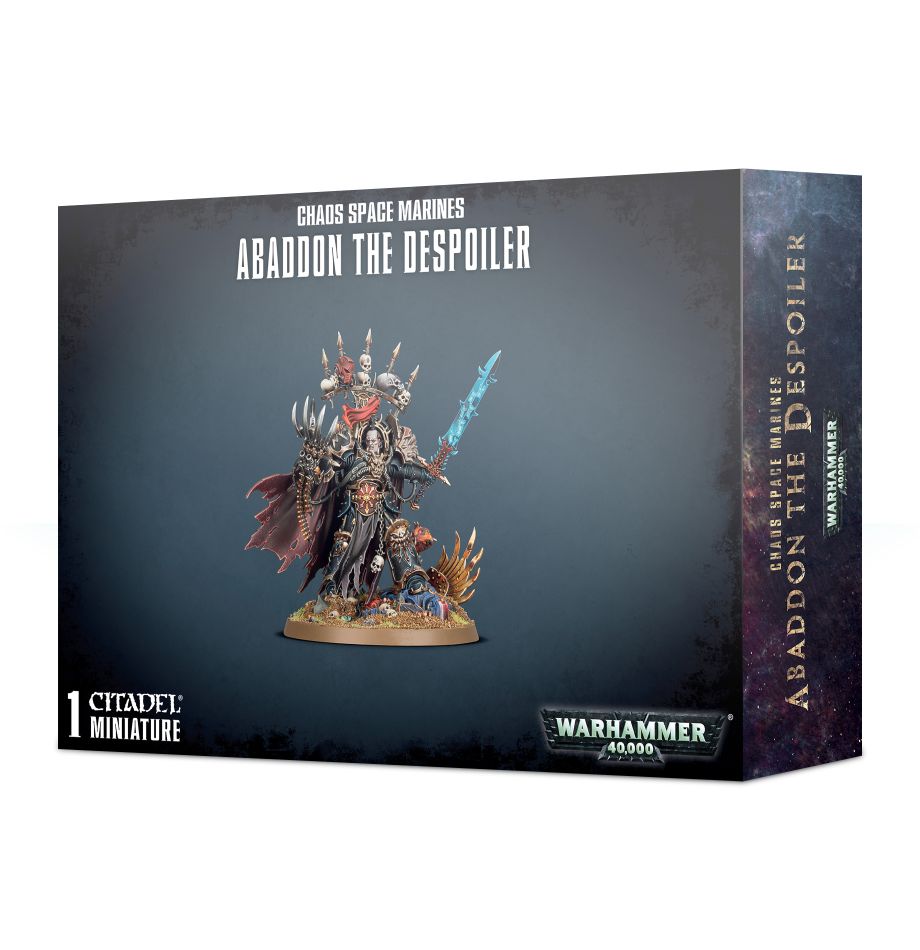 Striding onto the battlefield like a demigod of war, the Despoiler scowls at the mortal chattel before him. He is an ender of worlds, a destroyer of hope, a bane unto the galaxy itself. Yet he is not beyond the siren call of battle, and leads his Black Legion to acts of pitiless slaughter whenever a worthy foe is near.

Abaddon the Despoiler is the ultimate Chaos character. Terrifyingly capable on the battlefield, he’ll transform any army of Chaos Space Marines into a deadlier fighting force, either by causing carnage on the front lines or lending invaluable aura abilities to nearby troops.

This kit brings Abaddon to life in magnificent detail, drawing on three decades of art and lore to create a definitive representation of this iconic character. No detail has been spared – with baroque armour, intricate mechanical detail and grisly trophies, it’s a pleasure to paint and will immediately stand out from the rest of your collection. Even the base has a wealth of sculpted detail to help show Abaddon in all his dark glory!

You’ll even be able to customise your Abaddon with optional extras. You can model yours with or without the cape depending on your preference, while a choice of three heads is provided to ensure that your model fits your interpretation of the Warmaster. One features Abaddon’s classic grimace, another bears the likeness of Horus, while the last features an ominous rebreather.

This kit is supplied in 31 plastic components, and comes with a 60mm round base. 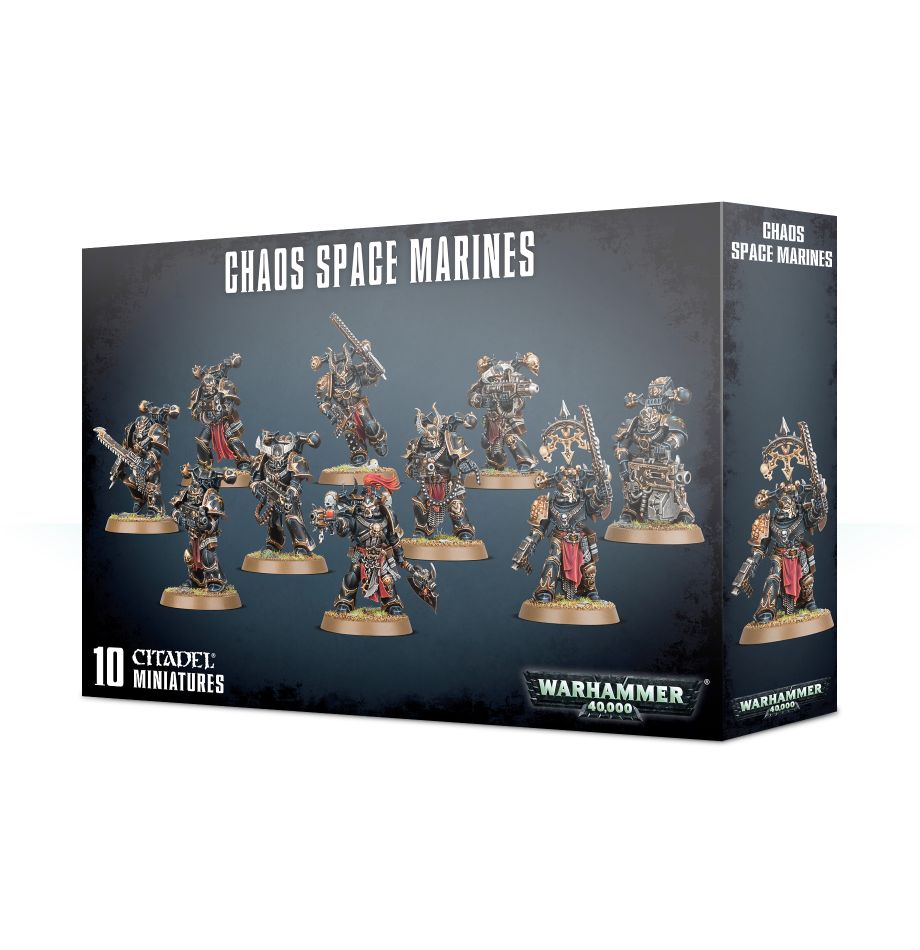 Not even the Space Marines are safe from the lure of Chaos. Whether they hail from the dark days of the Horus Heresy or turned traitor more recently, these baleful warriors combine their gene-given gifts with dark blessings and malefic sorceries, transformed by years of battle into fearless, superhuman reavers.

Chaos Space Marines are the core of any Chaos army. Equally at home shredding opponents at range with bolter fire as they are in bloody melee, these guys can be geared up for pretty much any purpose you want on the battlefield. Combined with your choice of Marks of Chaos, Chaos Icons and deadly weaponry, they’ve got a place in any of your army lists.

This kit builds 10 Chaos Space Marines, with your choice of weapons. The set is absolutely packed with optional extras, giving you the choice of arming every member of the squad with close-combat weapons and pistols or ranged wargear. You’ll be able to add your choice of plasma gun, flamer, meltagun, heavy bolter and missile launcher. Optional components let you build up to two Aspiring Champions, giving you the freedom to build the set as a single squad of 10 or two squads of 5. A Chaos icon, interchangeable components and optional grenades offer you even more choice, ensuring no two units need look alike. The set is even designed to be compatible with the Havocs, allowing you to mix and match heavy weapons for even more choice.

This set is supplied in 144 plastic components and contains 10 x 32mm round bases. 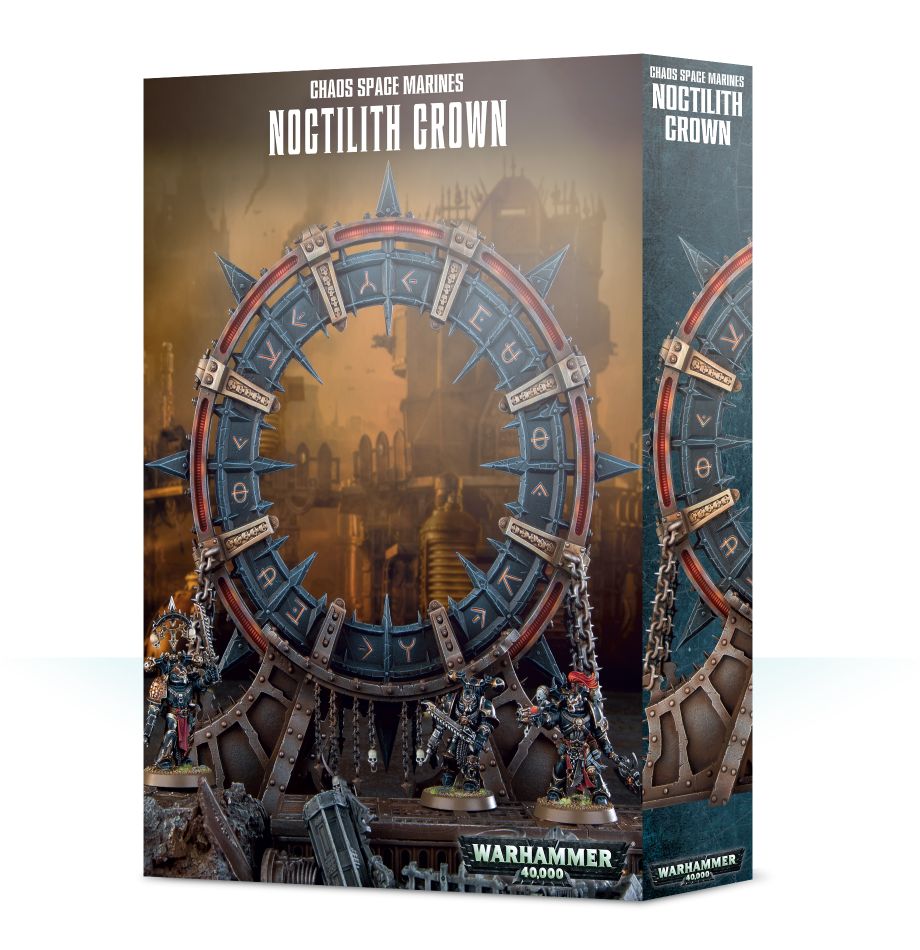 Noctilith Crowns are brutal edifices raised up by the Chaos Space Marines to weaken the very foundations of reality. Crafted from the mysterious material known as blackstone, these vast psychic resonators thin the veil to deadly effect.

The Noctilith Crown is a dedicated Fortification for your Chaos army. Protecting your troops with a shield of energy, it’ll make long-ranged warriors like Havocs and Obliterators incredibly difficult to displace. Chaos Psykers, like your Sorcerers or allied Daemons, will be able to re-roll failed Psychic tests, allowing you to master the Psychic phase, while your foes will have to worry about an increased risk of suffering Perils of the Warp!

This kit builds one Noctilith Crown. A towering structure, it’s an incredible piece for tying your collection together, featuring the same techno-baroque aesthetic shared by the rest of the Chaos Space Marines. Use yours as a Fortification in your games, or grab several kits to build terrifying, Chaos-themed battlefields.

This kit is supplied 24 plastic components. 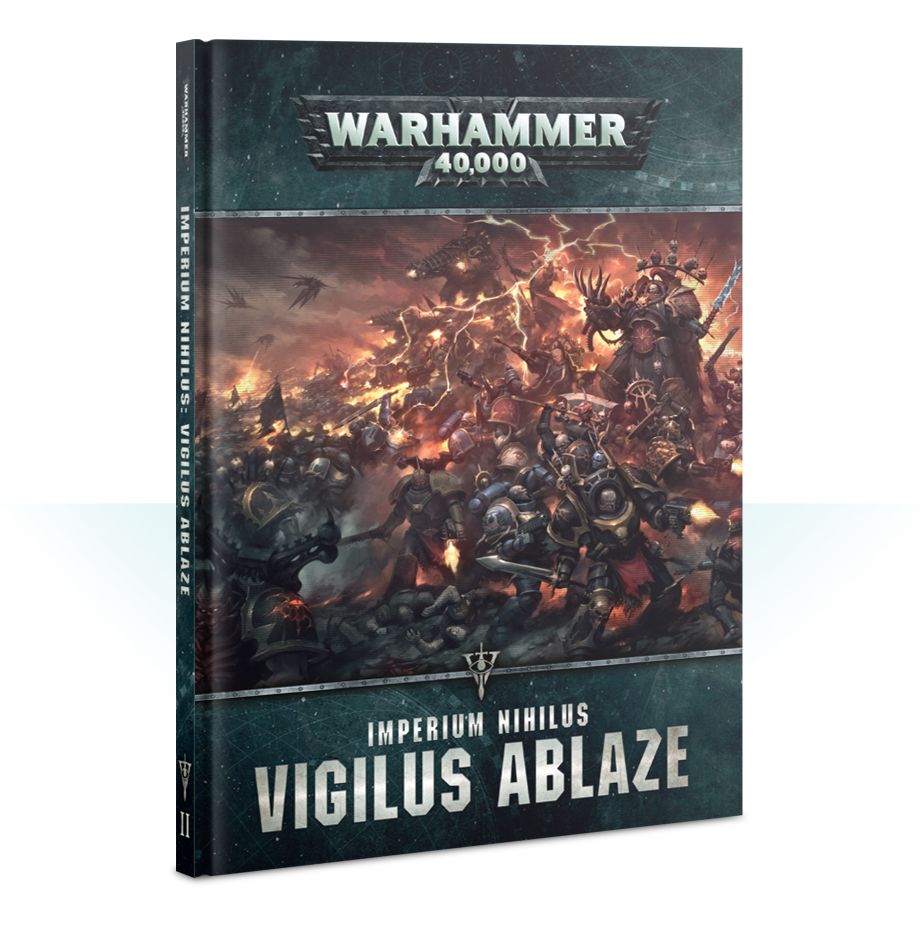 War continues to ravage the sentinel world of Vigilus, yet the fighting is about to escalate to a whole new level. The dreaded Warmaster himself, Abaddon the Despoiler, has arrived at the head of a vast Chaos fleet. Even the tactical genius of Marneus Calgar will be tested to its limits if he is to ensure the planet’s survival, for the Black Legion have consigned worlds beyond counting to slavery and death.

Imperium Nihilus: Vigilus Ablaze is packed with exciting background and new rules that enable you to refight the exciting events described in the book. Here’s what you will find inside:

– Background of the War of Nightmares – the thrilling final stage of the war on Vigilus – leading up to its epic climax of as one of the Imperium’s greatest champions faces its most terrible foe in personal combat
– Detailed accounts of the major events and battles that took place across Vigilus as the Warmaster’s forces sought to bring the world to its knees, including campaign deployment maps and details of key environmental features
– Details of the various armies that fought in this campaign, including descriptions of key actions, illustrations of major figures, regimental breakdown of battlegroups, heraldries, and deployment maps
– Campaign rules allowing you to bring the narrative of this book to life on your tabletop
– Guidance on organising and running a Vigilus campaign, including an extra layer of rules specific to the narrative: a Nihilus Events table and 12 narrative play missions (6 Crucible of War, 6 Echoes of War), as well as additional special rules and Stratagems based on the events of the War of Nightmares
– Six exciting battlezones to use in your games of Warhammer 40,000, each offering new tactical challenges and rules to represent varied battlefield environments, including rules for fighting battles aboard spaceships, amid raging infernos and more besides
– New and updated datasheets for 12 Daemon and Chaos Space Marine units (including Abaddon the Despoiler, as well as the Noctilith Crown and Skull Altar scenery pieces), 6 Prayers to the Dark Gods for use by models with the Priest keyword (and an additional Prayer for each of the four Chaos Powers), army abilities common to many of the Chaos units, as well as weapon profiles and points values
– Eight Specialist Detachments, each including Warlord Traits, Relics, and Stratagems unique to each Detachment
– Rules for the Black Legion, including eight bespoke Stratagems as well as six Relics, Warlord Traits, and Tactical Objectives unique to Abaddon’s traitor Legion
– Rules for Renegade Space Marine Chapters that have thrown in their lot with the Warmaster, including eight bespoke Stratagems as well as six Relics, Warlord Traits, and Tactical Objectives 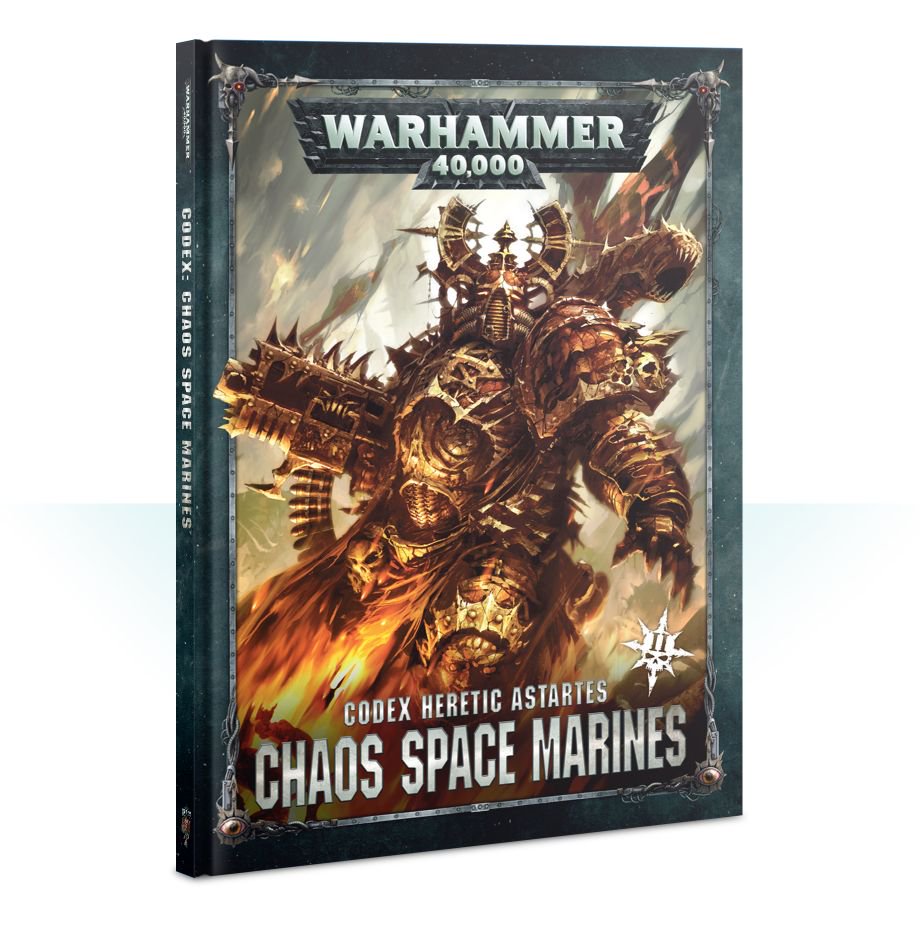 Codex: Chaos Space Marines is your complete guide to the Heretic Astartes – a brotherhood of superhuman traitors hell-bent on destroying the Imperium they once helped build.

In this codex, you’ll discover how the Chaos Space Marines came to be, their dark plans for the Imperium, and how they fight. Lore and timelines explore the long, shadowed history of these malefic warriors, from the dark days of the Horus Heresy to their renewed assault on realspace following the opening of the Cicatrix Maledictum. Collected art and illustrations bring the dark world of the Chaos Space Marines to life, while rules allow you to field an army from the Black Legion, Alpha Legion, World Eaters, Night Lords, Word Bearers, Emperor’s Children, Iron Warriors, as well as renegade warbands, including ones of your own devising.

You’ll be able to choose from a dark arsenal, containing everything from frothing, zealous Cultists to daemonforged war engines like the Defiler. Faction rules let you tailor your strategy and tactics to the legendary Traitor Legions, like the bloodthirsty World Eaters or relentless Iron Warriors, while a huge set of Stratagems offer you all manner of dirty tricks to unleash on your foes.

Meanwhile, the book is a fantastic resource for collectors, containing tips for building your army, examples of Chaos Space Marines forces, and loads of invaluable reference material and alternative colour schemes for painters. 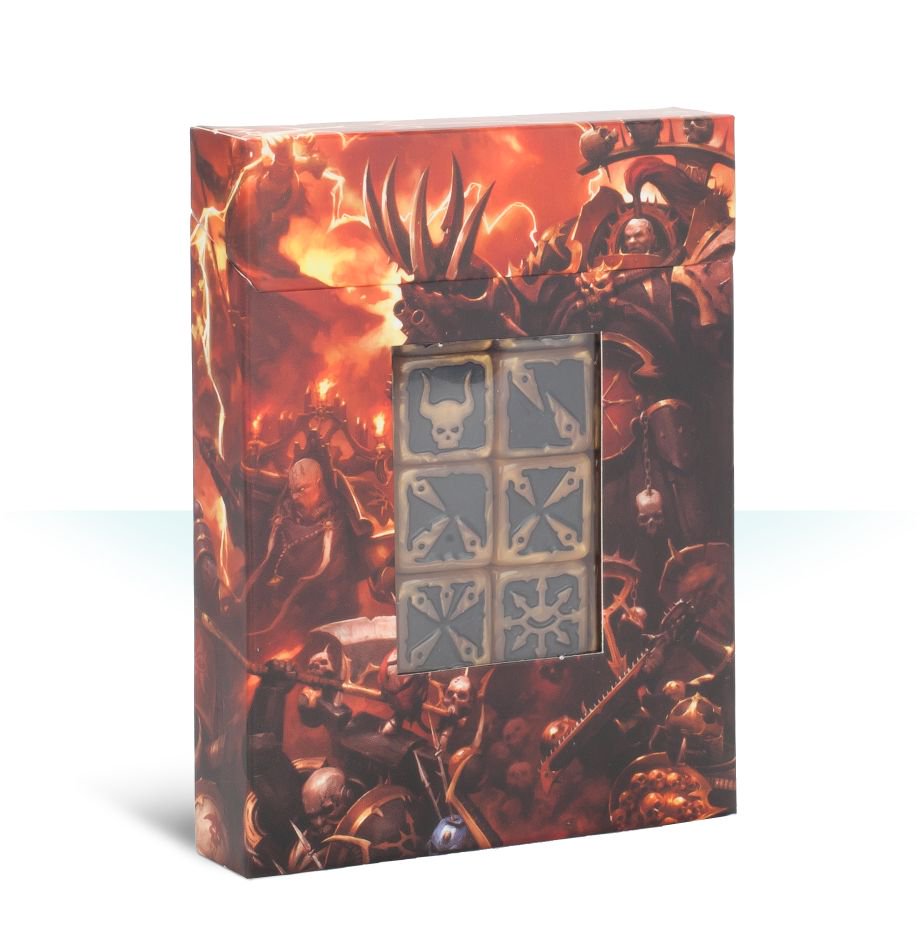 Show your dedication to the Warmaster with these Chaos-themed dice! Cast in the black and gold of the Black Legion, these eye-catching dice might not roll better than your normal set (the Chaos Gods are fickle like that!) but they do look great, and they’re the ideal accessory for any true devotee of the Ruinous Powers. 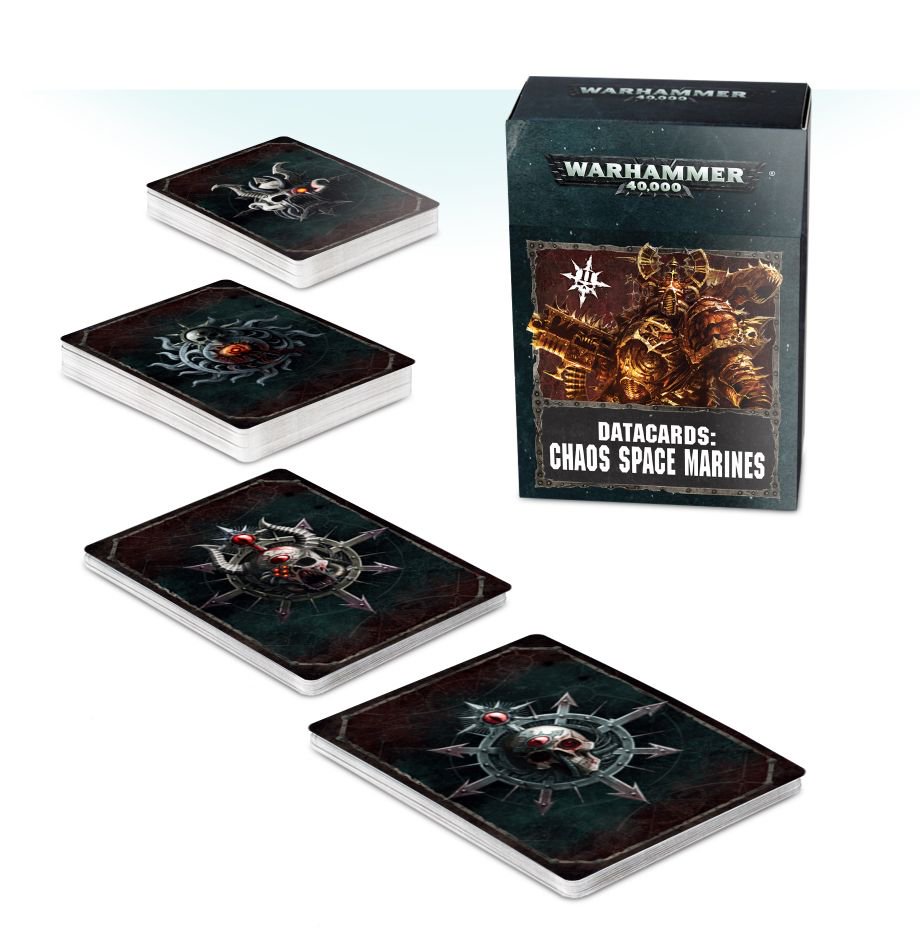 Plot the downfall of the False Emperor (or anyone else you’re battling!) with these datacards – an invaluable reference resource for Chaos Space Marines players. These cards are designed to make referencing key information in your games simpler, meaning less time trying to find the right page in your codex, and more time to crush the thin-blooded whelps who dare stand before you!

In this set, you’ll find easy-reference cards for 27 Stratagems, 16 psychic powers, and 10 Prayers to the Dark Gods, plus a full deck of Tactical Objectives cards.

Please note – you’ll need a copy of Codex: Chaos Space Marines to use this set.

The Warmaster is calling…