Come find out why Khorne is the judgiest chaos god, and see how his new Endless “definitely not” Spells will help his forces use magic to fight magic.

Khorne hates magic, it’s a truth as universally acknowledged as the one about a single man in possession of a large fortune necessarily being in want of a partner. But just as universal: magic is rad. So rad that even Khorne can’t refuse it. The new Blades of Khorne Battletome will include three new “definitely not spells” that are functionally the same as Endless Spells, only slightly better because they’re too magical and strong to be dispelled by actual Wizards. Come witness the incredible mental gymnastics necessary for Khorne to keep up the “NO WIZARDZ ALLOWD” sign on the Skull Throne.

Broadly speaking, Judgements of Khorne areendless spells – you’ll summon them into battle, at which point they’ll have a range of ongoing effects.

Judgements of Khorne are brought into battle by Slaughterpriests using a judgement roll. This means that they can be a little more difficult to summon than endless spells, but your opponents won’t be able to unbind them. Similarly, one of the handy things about not being a spell [according to Khorne] is it’s impossible to dispel a Judgement of Khorne. Instead, they have a fixed chance to disappear at the end of each turn, modified by the presence of a nearby Slaughterpriest.

Here’s a look at Khorne’s special magic powers. First up, there’s the Hexgorger Skulls, who are a “manifestation of Khorne’s hatred of the arcane arts” and they manifest this by floating around specifically looking for magic to “ingest” because it still counts as hating magic if you eat it angrily while loving every bite.

That said, they are pretty brutal and will make it hard for enemy Wizards to cast spells, to the point where they can even eat spells out of a Wizard’s mind forever. 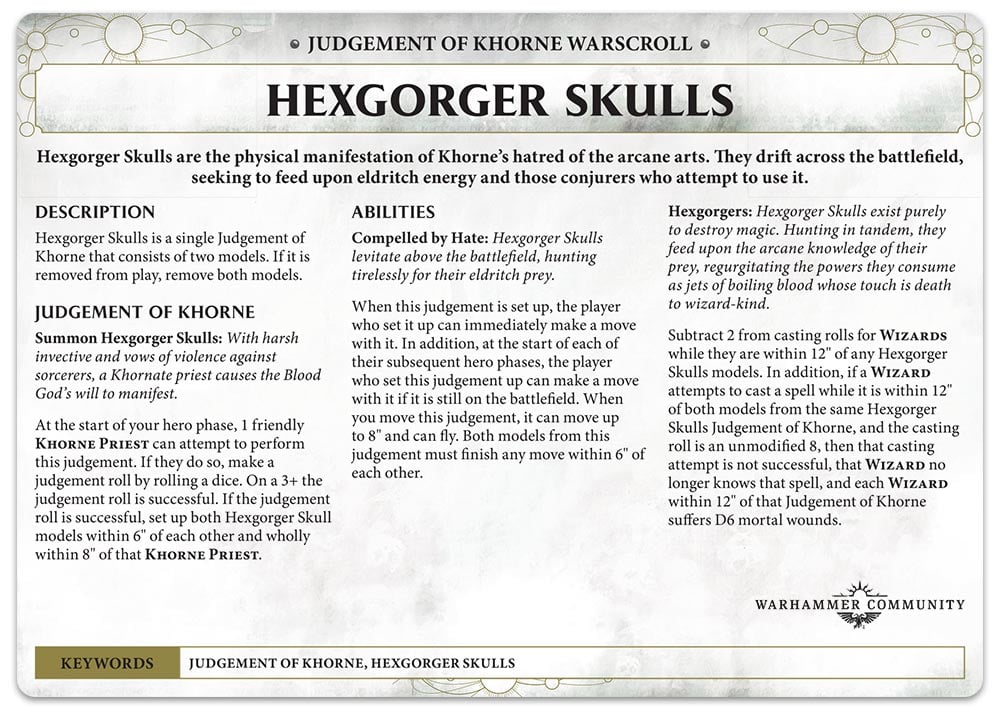 Up n ext is the Bleeding Icon, which floats around the battlefield killing friend and foe alike, whether through direct contact with enemy units, or by making units who fail their battleshock tests flee even more. 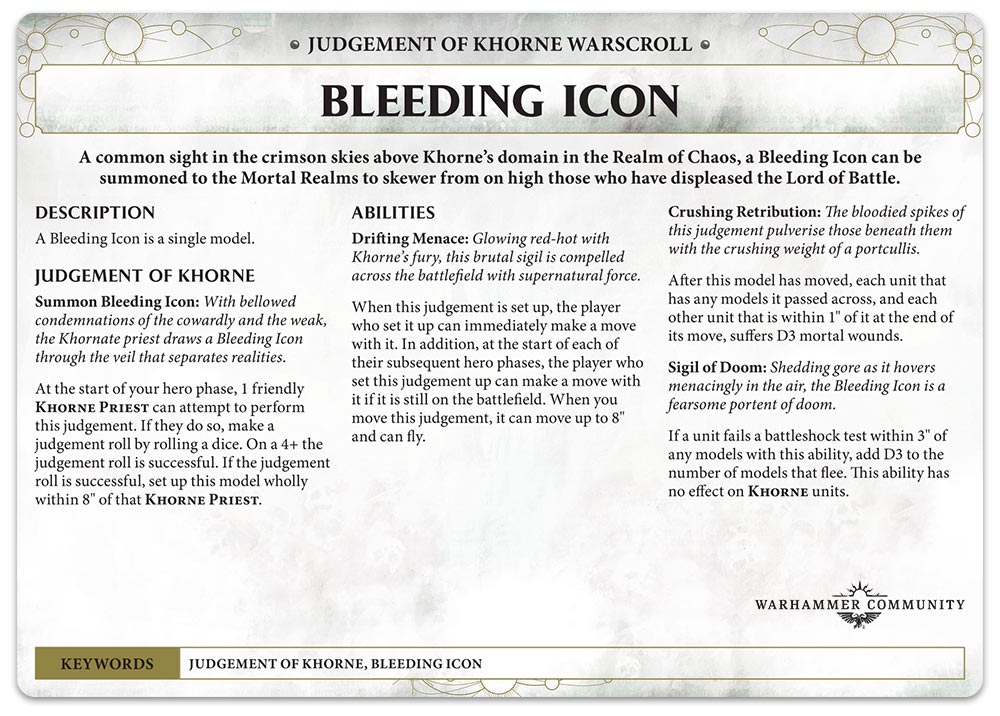 Then of course there’s the Wrath-Axe, which slices, dices, and reduces the hit roll of nearby non-Khorne units. 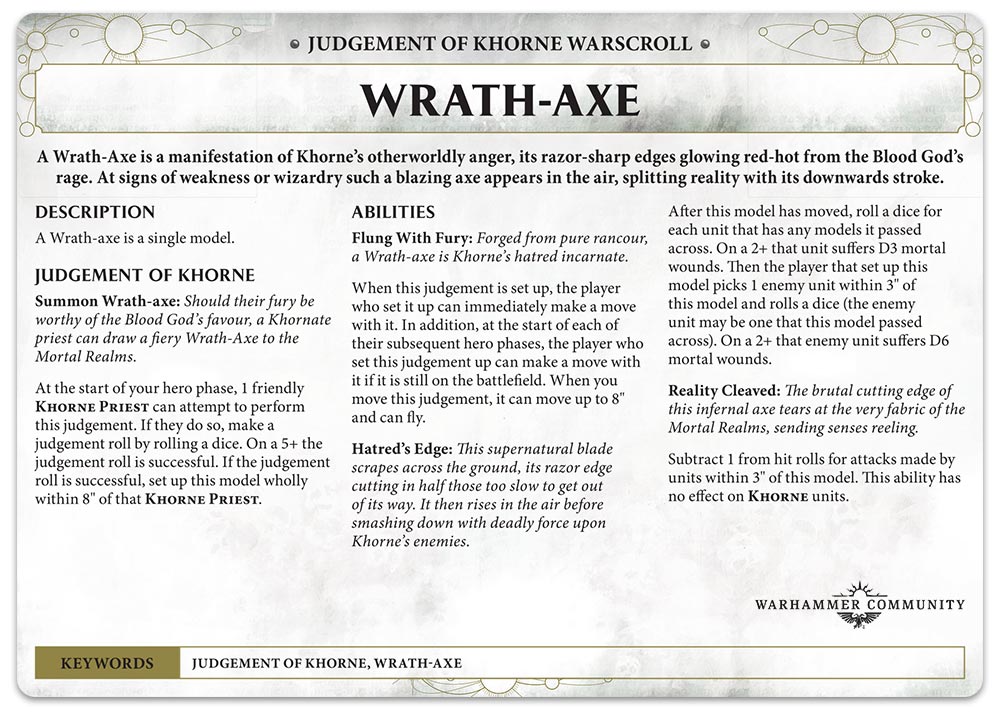 Finally we have a look at the Skull Altar, Khorne’s new terrain set that you can just set up on the battlefield. It plays well with Slaughterpriests, making sure that your magic goes off, and the enemy’s doesn’t. 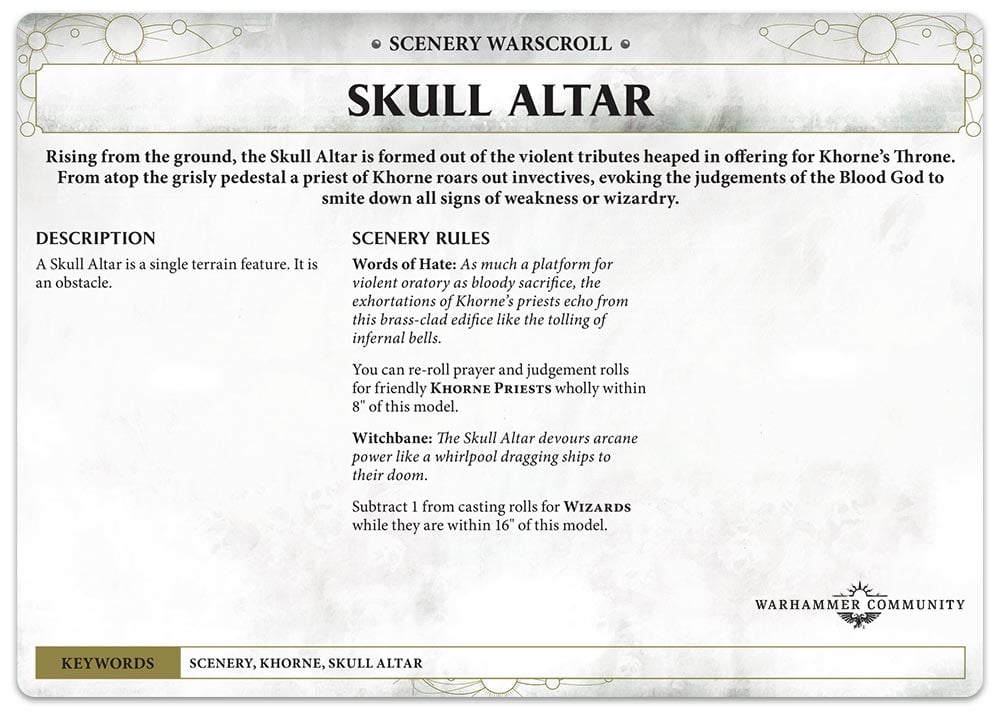 Stay tuned for more Blades of Khorne previews–the book is up for pre-order next week!

In the meantime, what do you think of these new Endless Not-Spells? Let us know in the comments! 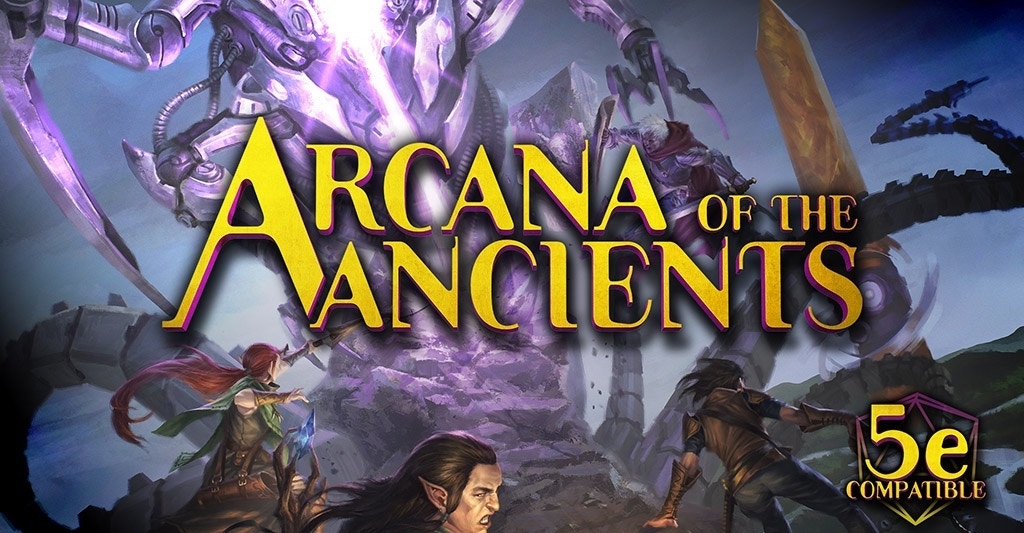