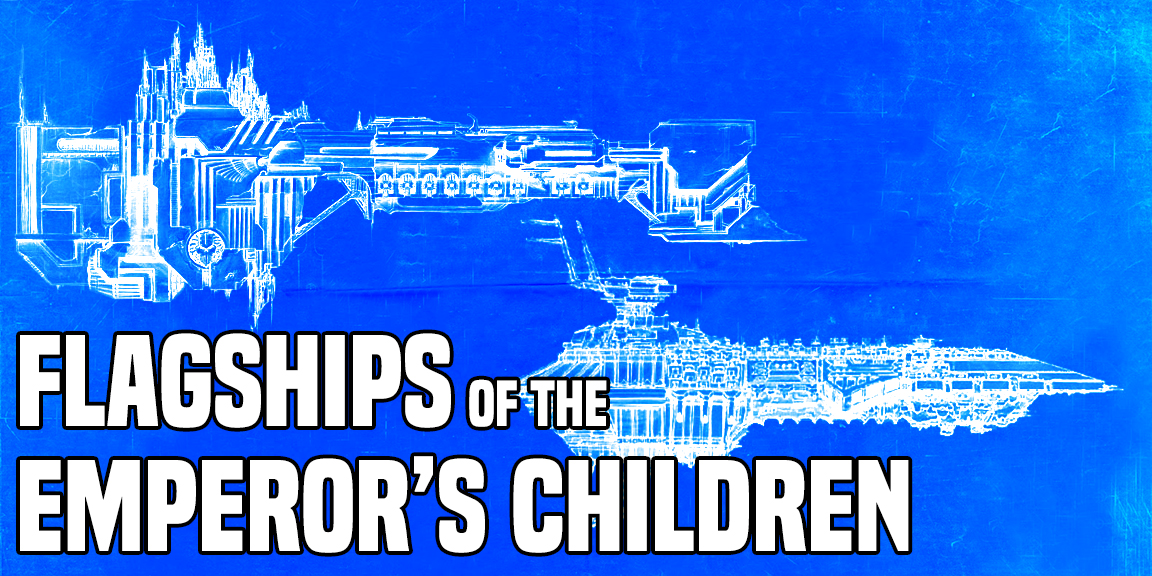 Come Loremasters and learn of the dread vessels that command the thrice-damned Emperor’s Children.

The Emperor’s Children are led by several key vessels, used for both Legion command and personal missions. 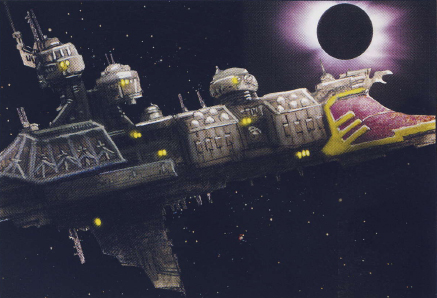 Pride of the Emperor

The Pride of the Emperor was a Gloriana Class Battleship and the Flagship of Fulgrim, Primarch.

Richly decorated inside and out, with armour plates inlaid with gold being its most obvious extra-normal feature. Built in the shipyards of Jupiter, it was a little over 160 years old at the beginning of the Horus Heresy. Hand-crafted to exact specifications, its construction took twice as long as that of comparable vessels, and was overseen by the Fabricator-General of Mars himself. Such honour was paid to it as it was seemingly intended to be the Flagship of the Primarch of the III Legion from the moment it was laid down.

The main passageway of the vessel was the Triumphal Way; a wide processional, tiled in cool marble and supported with onyx columns. The columns were inlaid with gilt lettering that recounted the victories of the Legion, and statues of Legion heroes lined the walls. In between the statues were later added paintings created by the remembrancercontingent present with the 28th Expeditionary Fleet. Interspersed with the statues at fixed intervals were an honour guard of Emperor’s Children Space Marines, each armed with a throwing spear. The Triumphal Way terminated at the Phoenix Gate; the main entryway to the council chamber known as the Heliopolis.

The Phoenix Gate was a large bronze gateway guarded by more Emperor’s Children. Upon the doors was engraved a mural showing the Emperor presenting Fulgrim with the symbol of the Imperial Eagle. Passing through it, one arrived in the Heliopolis, a large circular chamber designed as the main meeting room of the Legion officers. Also lined with pale marble walls, black terrazo flooring and supported by pillars and bronze statues, the Heliopolis also featured a heavily mosaiced ceiling that dripped purple and gold banners. The centre of the domed roof featured a window port that allowed starlight to penetrate the room when the illuminators were doused. Oil-burning censers were spaced throughout the room. Rows of benches were arranged in a circular formation, in a banked series that provided seating for two thousand. A chair of black marble sat in the very centre of the room; the seat of the Primarch. The closer one sat to the floor and the Primarch, the higher one’s perceived rank and status. Fulgrim typically gave his speeches here and, on the days before a battle, a feast as well as celebration was held within the Heliopolis

A century after the Heresy at the Battle of Thessala the Pride of the Emperor had been grotesquely transformed by the corruption of the Warp. The vessel was a sick intimidation of what it had once been in the Emperor’s service. 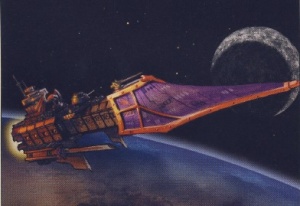 The Andronius was commanded by Lord Commander Eidolon during the early stages of the Heresy, it led the Emperor’s Children contingent in the Battle of Isstvan III.

In its original form, it held the Gallery of Swords which ran the length of the ship, with a transparent roof and lined with hundreds of statues to heroes of the Legion. Following the Legion’s change of allegiance, these statues were altered, some of them being crudely modified to resemble bull-headed monsters.

Following Fulgrim‘s order to pursue genetic experimentation on the Legion, Apothecary Fabius conducted his work from a research facility below the Gallery of Swords, accessed through a hidden entrance contained within a huge mosaic in the Central Apothecarion depicting Fulgrim’s victory at Tarsus.

The Wage of Sin is a Battle Barge used by the Emperor’s Children. Dating back to the Great Crusade, the Wage of Sin is the current flagship of Eidolon who leads one of the largest and most organized Emperor’s Children warbands. The ship is frequently used to capture slaves to feed the appetites of the hedonisic Emperor’s Children, and boasts a large retinue of Noise Marines. However it also maintains close ties with the Black Legion, and has been seen alongside the ships of Abaddon the Despoiler on multiple Black Crusades.

The Vesalius was a Gladius Class Frigate captured and renamed by Fabius Bile.  Since coming into his possession it has undergone substantial modifications with captured xenotech and other heretical technologies, giving its machine spirit a level of awareness bordering on Abominable Intelligence.

~ Report any activity of these Heretic vessels immediately to your nearest Battlefleet HQs!