The Adepta Sororitas are getting quite the update to their classic Rhinos. Plus, we get our first look at the updated Penitent Engine!

It’s a brand new Battle Sisters Bulletin which is bringing us some fresh looks at their upcoming ornate update. We’re getting a peek at their new vehicle kits coming, and they are every bit as Gothic as you would expect!

One of the mainstay vehicles for the Sisters has always been the Rhino chassis – but not the one that the Adeptus Astartes use. No, the Sisters are old school and run with the Mk I Deimos-pattern Rhino Chassis. 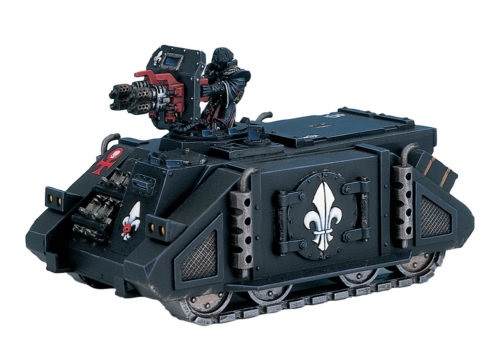 This chassis is used for the Immolator, Exorcist and Rhino. It’s got a similar profile to the Mk IIc Mars-pattern, but with some unique design differences. First up, the side doors are rounded and open outwardly. The model designers are leaning into this look with the doors that they are developing: 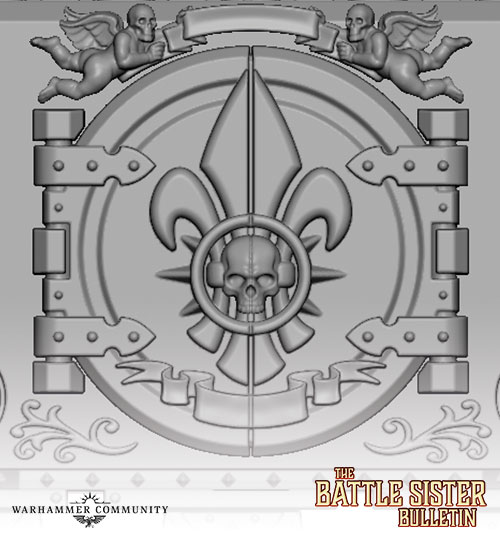 You can see the updated look with the extra Gothic-vibe and the icon fleur-de-lys of the Sisters. 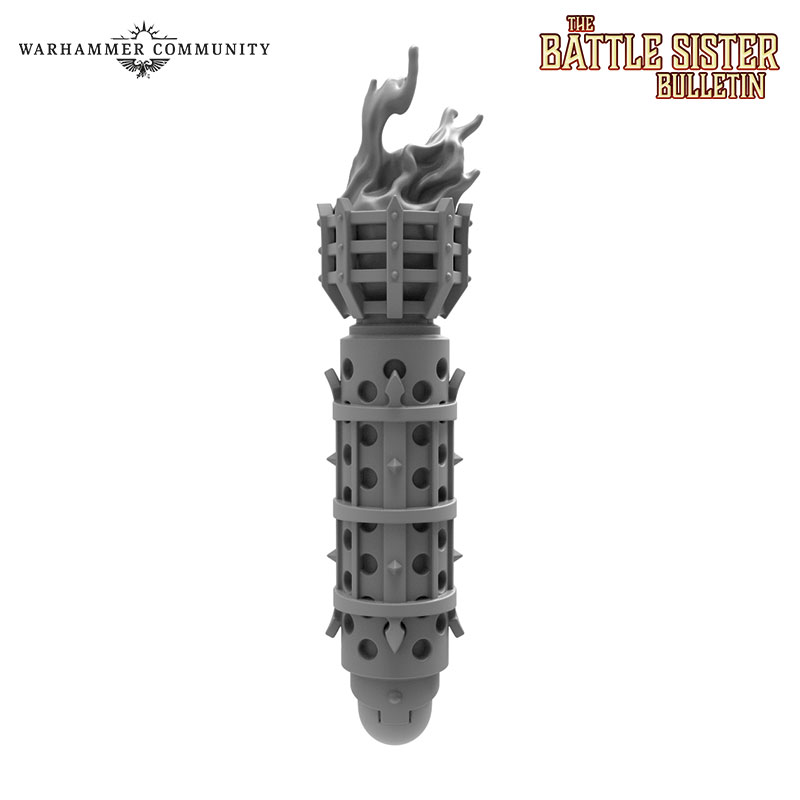 We’re also getting a look at the exhaust ports of the Rhino. As you can see above, it’s more exposed than the Mars-Pattern, but the Sisters are adding some extras to make the exhaust resemble a brazier – quite fitting for folks who want to burn all those pesky heretics! 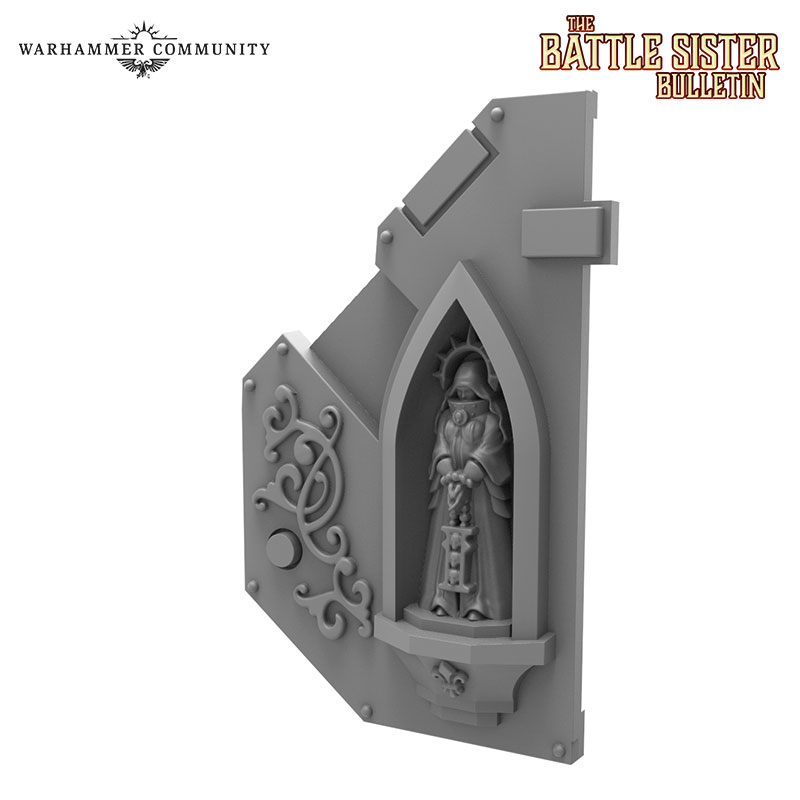 The side panel is also getting touched-up with a few embellishments – we see some extra filigree and a built-in shrine to some holy figure from the sisterhood. Their rhinos are going to look like miniature cathedrals on the battlefield. The only thing that’s missing is a stained-glass window… 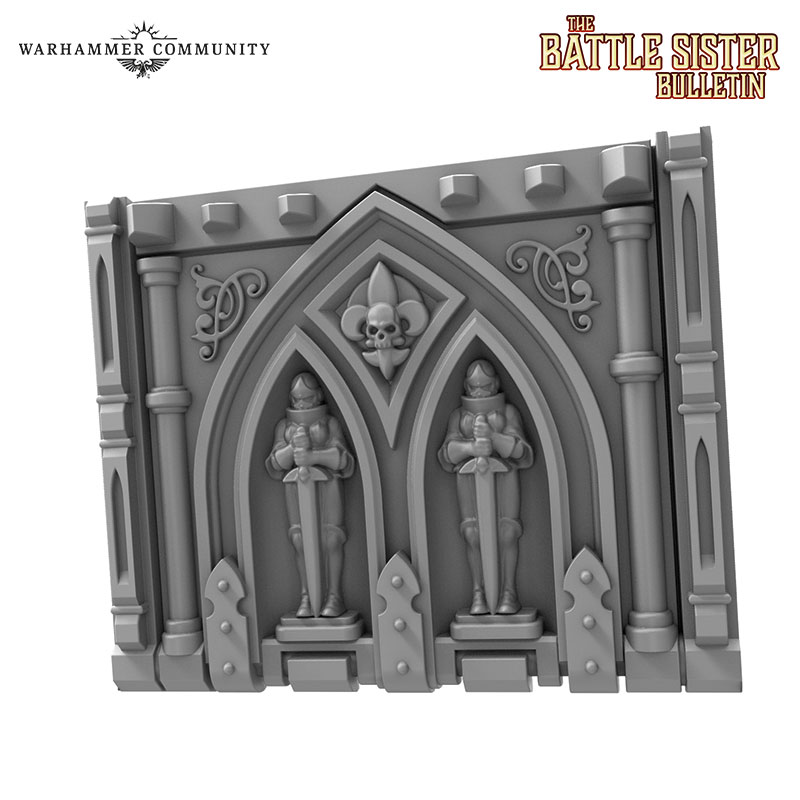 …Or an ornate rear-hatch that is just that! Seriously, these Rhinos are going to amp-up that whole “Nuns with Guns” vibe of the Sisters. I guess we shouldn’t be surprised.

I do have some questions about these kits from a logistical standpoint. My main question is if these updates are going to retrofit the current Rhino kit (which is the Mk IIc Mars-pattern Rhino) or will Games Workshop be reproducing the old Mk I Rhinos specifically for the Sisters? Forge World has a conversion kit so that would be the route I would think GW would go. But stranger things have happened.

One of the most feared battle engines, the Penitent Engines are horrific “battle-suits” that have a condemned pilot who gets plugged into these weapons of war. The process and the prospect of “riding” these into battle are why they are called “Penitent” Engines. The current options are metal monstrosities, quite literally. 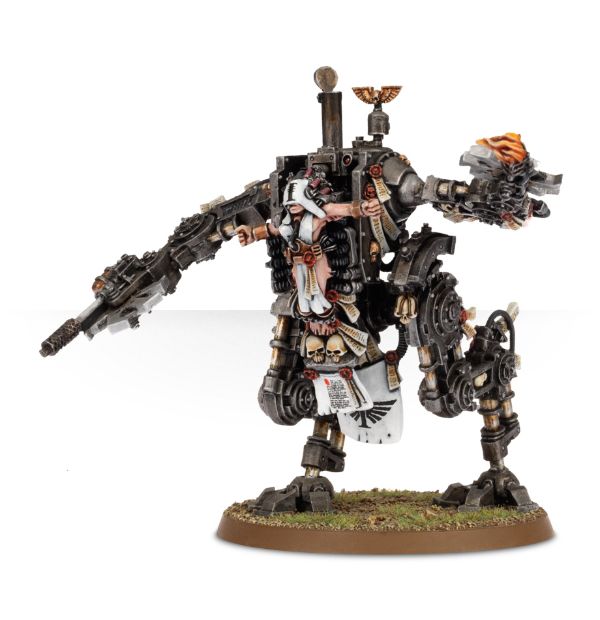 From a hobby perspective, they are a challenge. If you can pin this kit, you 100% should. If you don’t, well, I hope you take really good care of your models. Thankfully, GW is redoing these models, and they look like they are getting the plastic treatment. We’ve got our first look at the poor soul that will get strapped into this machine: 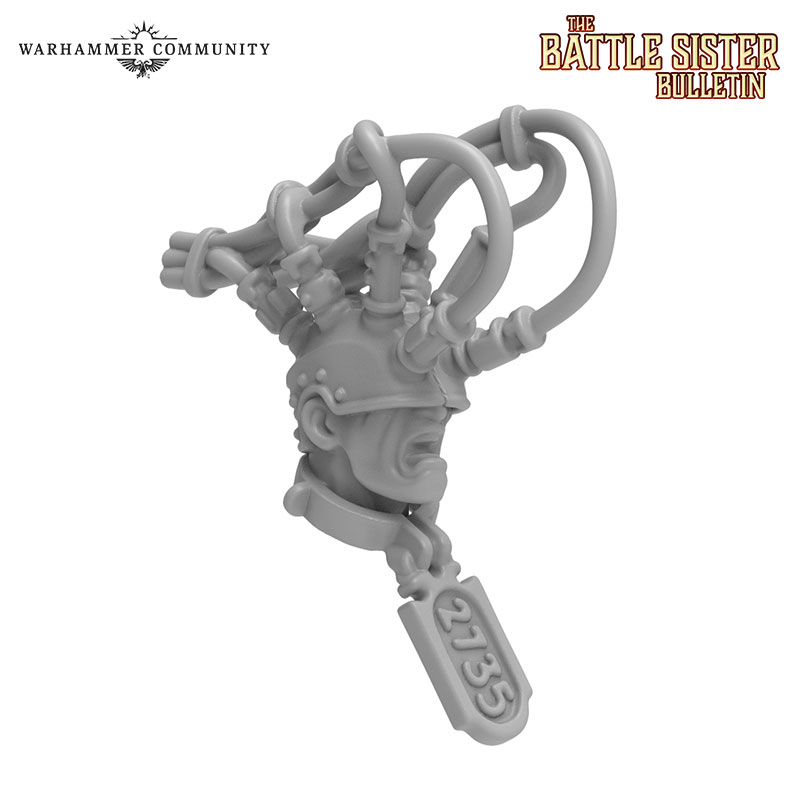 Who needs a machine spirit when you’ve got an actual one plugged in?! Maybe that’s where they are taking some of the design cues from… nah! That NEVER happens…

Anyhow, this is our first look at the Penitent Engine, and I’m liking the direction they are going (as in plastic). I’m betting that we’re going to get a crazy looking model by the time the rest of this one comes out to play.

So what’s your take on the new “Old School” Sister’s Rhino and the updates to the Penitent Engine?

Author: Adam Harrison
Writer, Editor, Texas Native, and Austinite for 15+ years, Adam covers all things Tabletop Gaming. Which includes Warhammer 40,000, Age of Sigmar, D&D, Board Games and everything else that involves dice, boards, cards and a table. A hobbyist, player, and collector of miniatures and games, Adam's current obsession are his Death Armies for Age of Sigmar, his Blood Angels and Tyranids for 40k, and his ever growing Arkham Horror: The Card Game Collection.
Advertisement
Games Workshop Miniatures Sisters of Battle - Adepta Sororitas Tabletop News Warhammer 40k
Advertisement