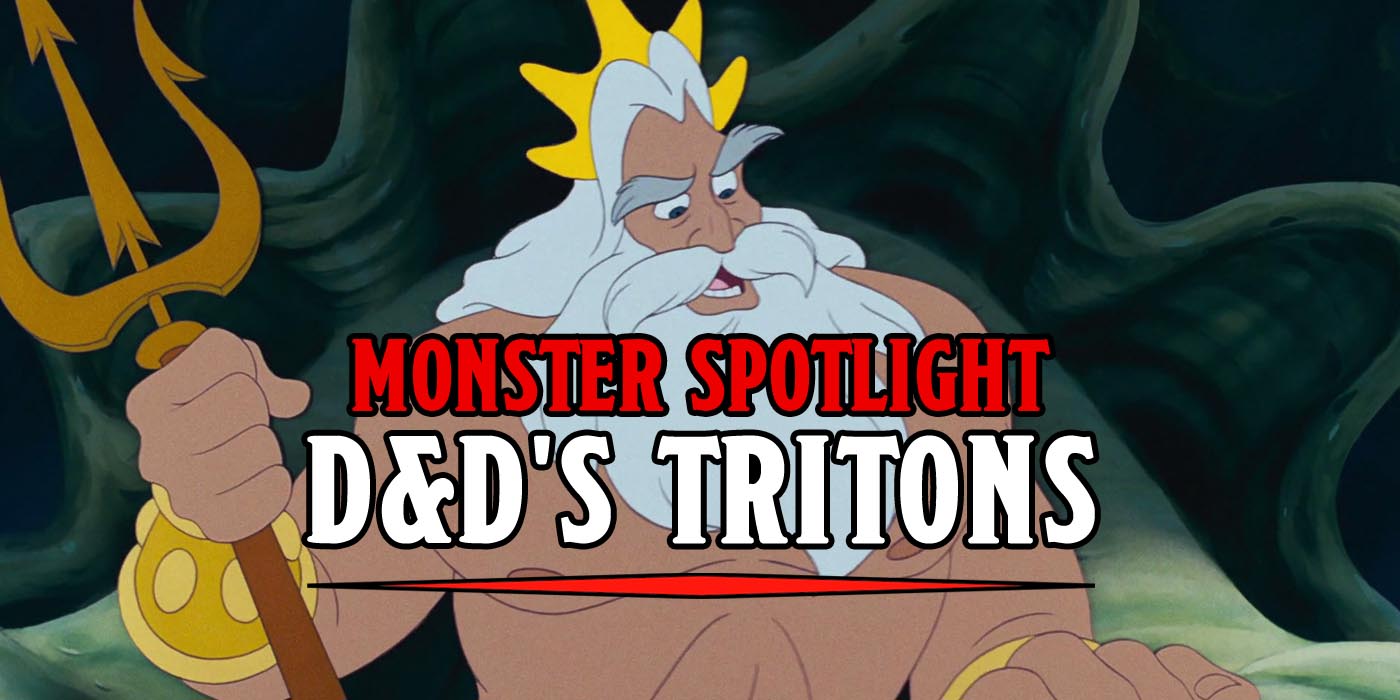 The mysterious Tritons are basically the Atlanteans of Dungeons and Dragons, but who are they really? Find out in today’s Monster Spotlight.

Yes whether you prefer your Atlanteans to be Namor, Jason Momoa, or Leonard Nimoy and Cree Summer, there’s something vaguely universal about a race of underwater recluses who fight against the dangerous denizens of the deeps. And in Dungeons and Dragons, with its Kuo-Toa, Sahuagin, Merrows, Chuul, and many, many more underwater menaces has its own. They are the Tritons, and today we’re bringing them up from the depths and into the Spotlight. 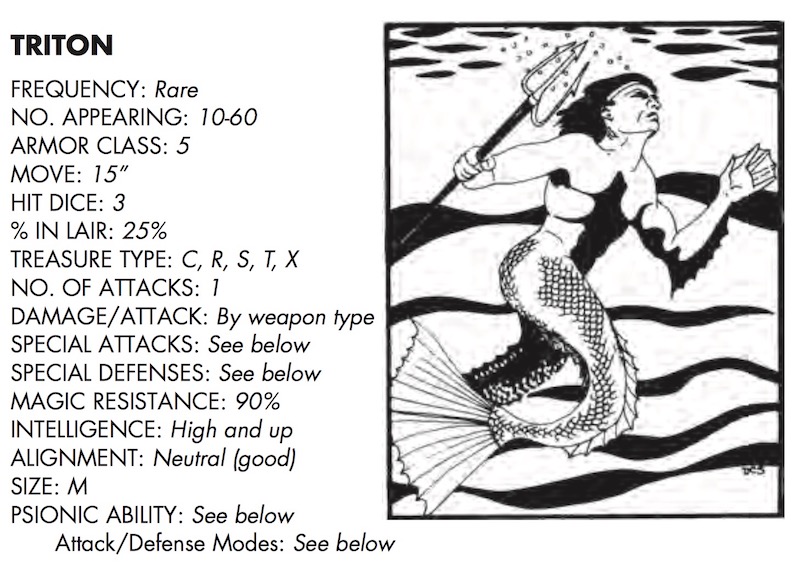 First appearing in 1st Edition, the Triton was originally a mysterious race from the Elemental Plane of Water who had come to the Prime Material Plane for “mysterious purposes.” They were an interestingly designed monster, breaking from the usual merfolk mold by having two fishtailed legs and riding on literal sea horses to get around faster. 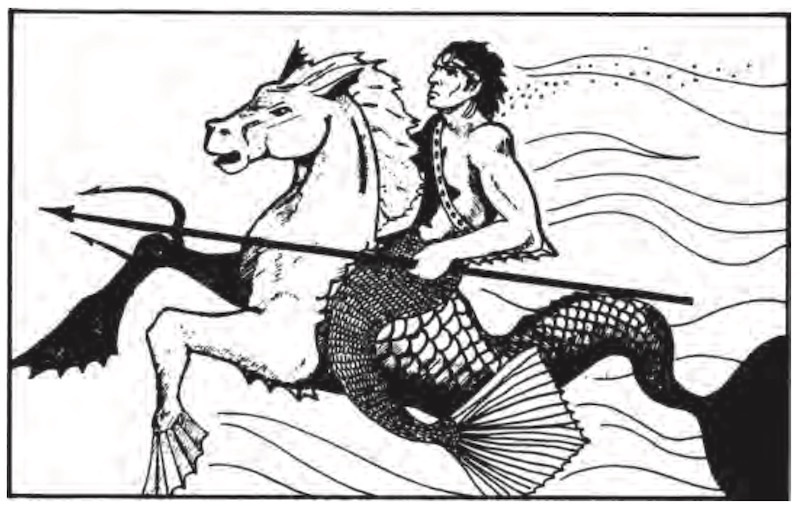 Masters of the Marine, the early Tritons were best known for their conch shells. They could sound them to summon or frighten marine life, making them excellent allies to have (or a convenient cavalry to arrive) when the players are outmatched underwater. 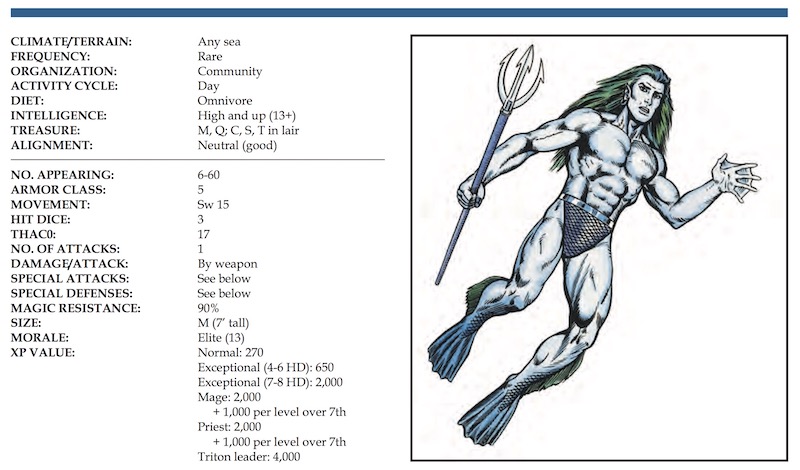 In 2nd Edition, Tritons take on their much more iconic look (you can see the 5th Edition inspiration right here), and become a little more fleshed out:

Trit Tritons rarely kill, unless provoked, but they are quick to apprehend those who intrude upon their seas. Trespassers found guilty of intentionally entering triton waters or treasure seeking are left “to the fate of the seas.” This means being stripped of all belongings and set adrift at least 10 miles from any shoreline. Characters ruled innocent by the triton court awaken the next day on some distant shore. Tritons never aid land dwellers unless their own interests are involved in the matter.

Again, you get an idea of how they were meant to be used. What you find in the monstrous manual is not an adversary to be fought, but a civilization to interact with. They are a great example of how you have monsters that are “good” but still are opposed to the players’ interests. The Tritons are there to either introduce an undersea world, expand it, or to act as consequences for exploring in it. You can use them to move players from one place to another, to get them either under the sea or on it–or my favorite, they’re the stubborn allies that can provide a lot of help–but must be convinced to join the alliance against the land-dwelling overlord, or whatever. 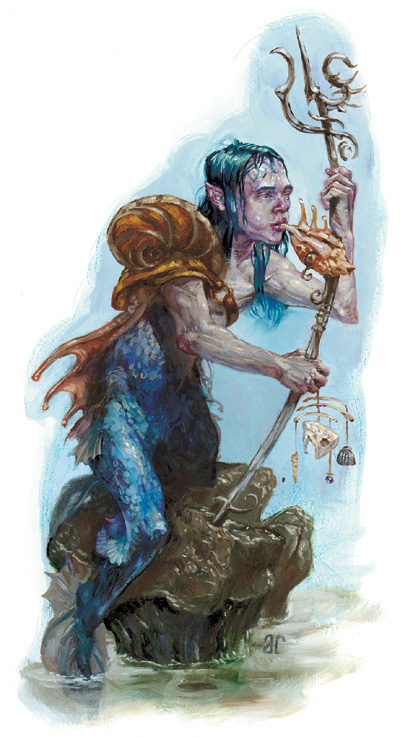 In 3rd Edition, Tritons lose a lot of their cool identity. They work best as foes of the Sahuagin, and that’s about it. Otherwise, they’re just a society of hunter-gatherers who inhabit the natural places of the Underwater worlds. And from this sort of vague description, they fade away entirely… 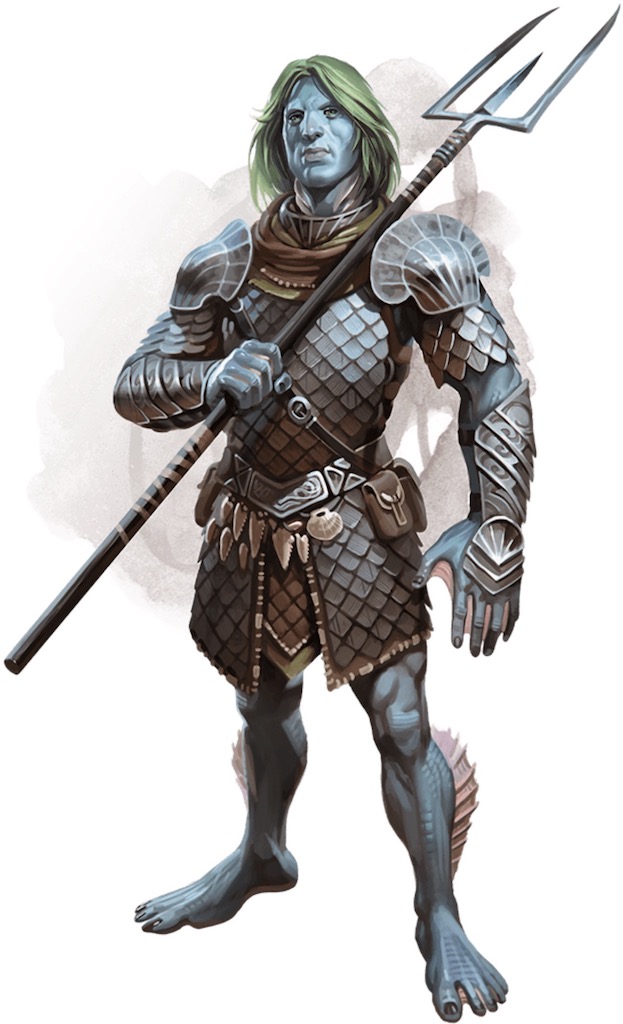 …until 5th Edition, where once again Tritons have an almost mythic place in the D&D world. I really like the look of them in this edition, they’ve got such a very distinct aesthetic. And though they only appear as a Player option in Volo’s Guide, their rules again give you a clue about how to use them. How to make them fit into your world. Tritons are guardians of the oceans. If you see one up on land, it’s a rarity (which any PC surely would be), and they’ve been sent with a purpose. That plays right into their backstory. As a result, Tritons feel much more legendary:

Centuries ago, tritons entered the world in response to the growing threat of evil elementals. Tritons waged many wars against their enemies on the Plane of Water, driving them into the Darkened Depths where they escaped into the crushing pressure and utter darkness. In time, the tritons noticed that their ancient elemental foes had grown quiet. Expeditions to the depths revealed that krakens, sahuagin, and far worse foes had fled the Plane of Water for the Material Plane.

The tritons, driven by a sense of duty and responsibility, would not allow their foes to escape so easily. A great conclave of tritons chose volunteers skilled in weapons and magic as part of an expeditionary force to enter the Material Plane and seek out their enemies.

Those tritons spread across the world’s oceans and established protectorates to watch over deep sea trenches, portals, undersea caves, and other locations where their enemies might lurk. They defeated their foes when they found them and drove the rest into hiding.

With their foes banished to the deepest reaches of the sea, tritons settled in to watch for any sign of their return. Over time, the tritons extended their stewardship over the sea floor from their initial settlements and built outposts to create trade with other races. Despite this expansion, few folk know of them. Their settlements are so remote even merfolk and sea elves rarely encounter them.

They’re a great PC race, though a rarely seen one. Their quirks make them prone to be fish out of water, which is what’s best about characters like Namor or Wonder Woman or any haughty noble character who is sort of curious and delighted to find out that the world is not what they expected it to be. If you’re looking for a different take on the mysterious type–consider playing a Triton.