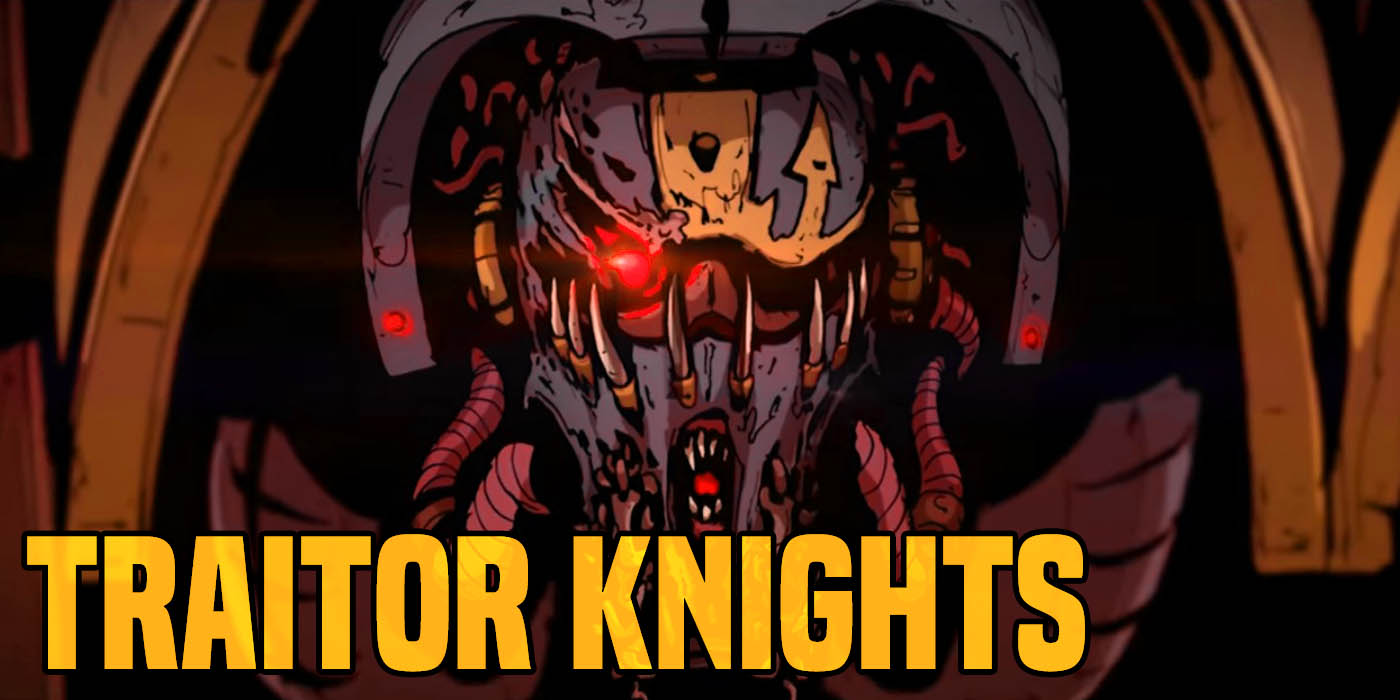 Today Loremasters we will examine a handful of the wretched Knight Houses who fell to the ruinous powers – traitors through and through.

Today we look at 4 infamous Houses among scores of their twisted brethren. 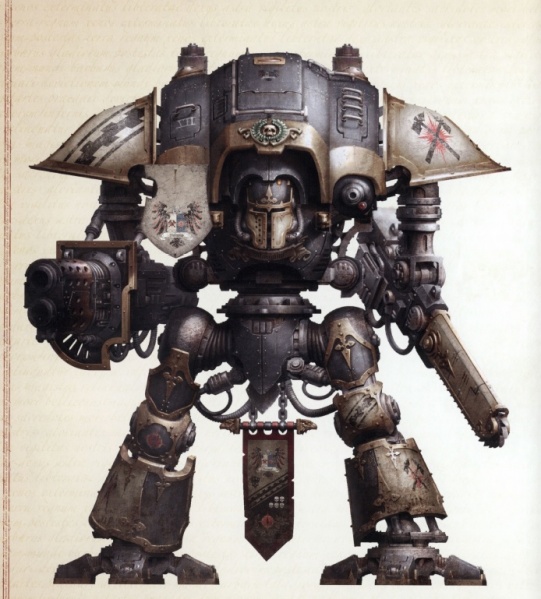 Originating on the world of Baroda in the Coronid Deeps, House Makabius achieved supremacy during the Age of Strife in 831.M30 when it vanquished the rival House Wentorth and ended the world’s eight hundred year civil war. Shortly after, Baroda made contact with the young Imperium but chose to resist, which resulted in its swift defeat by the Imperial Fists in the Battle of Arben Moor. The House pledged loyalty to the Imperium thereafter under the patronage of the Forge World of Mezoa. However due to the poor state of the House and bureaucratic slowness in their upgrading process, the Knights of Makabius saw little action in the Great Crusade and could only brood on their defeat while hearing of great victories being won by the forces of the Imperium elsewhere. Nonetheless a few Knights saw deployment as Freeblades, where they quickly gained a reputation as courageous shock troops and siege-breakers. One of these scions was Markan Hrotham, who gained the favor of Ezekyle Abaddon.

Shortly before the Drop Site Massacre, Markan returned to Baroda with a message from Warmaster Horus promising glory and revenge for the neglected House. He was rejected by the ruling council of Lords of Baroda, but Markan undertook a coup with younger Knights which was successful. After seizing power, he launched a bloody purge against loyalists of the planet. Thereafter, House Makabius pledged itself to the Warmaster. Increasing the House’s strength from two dozen to nearly two hundred Knights, they left Baroda shortly after, being deployed by traitor forces in the Battle of the Coronid Deeps under the command of the Death Guard.

They fought beside Legio Interfector in the Battle of Beta-Garmon 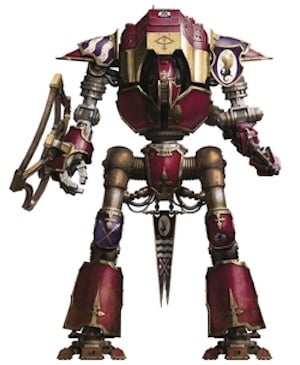 The Knight World of Molech was located only several light years from Terra. Molech was reclaimed for the Imperium in a bloodless compliance by the Space Marine Legions in 869.M30, and was visited by no less than three Primarchs, Lion El’Jonson, Horus and Jaghatai Khan, all of whom left their mark on the world. Prior to Imperial Complaince, the people of Devine worshiped beings known as the Serpent Gods, until the practice was outlawed in favour of the Imperial Truth. Serpent cults devoted to these gods still existed underground up until the outbreak of the Heresy.

Ruled over by House Devine from their stronghold of the Dawn Citadel, the world had close links to the Adeptus Mechanicus. Supporting the knight houses were a priesthood of Sacristans who handled the mechanical interface between the nobles and their mounts, the military of the Sacristan Guard and the Dawn Guard, and Devine’s personal forces of huscarl cavalry, mechanised infantry, superheavy tanks, artillery and battle robot cohorts.

Molech was one of the planets that the Warmaster Horus assaulted during his drive towards Terra. Three Titan Legions and over a hundred Imperial Army regiments and Knight Households stood ready to face the Warmaster’s onslaught, which included the Sons of Horus and Death Guard Legions. These forces were secretly in place to protect the gateway to the Warp that the Emperor had used to obtain his powers. Shortly before the traitor invasion, Governor Cyprian Devine was killed by his power-hungry son Raeven, which began the decline of the House. Instability was stoked further when during the battle, Raeven and his wife Lyx were killed by the crippled first-born of Devine, Albard.[1a] Albard soon became corrupted by Slaanesh, driven mad by the visions of a Great Serpent. Many of his followers followed him to treachery and madness.

Horus’ initial assault devastated many cities and strongholds including House Devine. Over the following months, the insidious whispers of Slaanesh spread through their fatigued ranks. Their officers became lethargic and interested only in their sports, using their mighty machines to hunt down the wild animals of Molech. Soon, they began to meet in secret cabals, committing depraved rites and ceremonies within the heart of the Loyalist camp.

The Knights of House Devine betrayed the when Horus launched a massive offensive against the loyalist forces. The Loyalists found themselves trapped between the advancing enemy forces and the Renegade Knights attacking from behind, allowing the Forces of Chaos to punch through the Imperial lines, blocking any routes of escape. Of the entire Imperial host only one in a hundred survived the campaign.

They also fought beside Legio Vulpa and Legio Mortis in the Battle of Beta-Garmon. 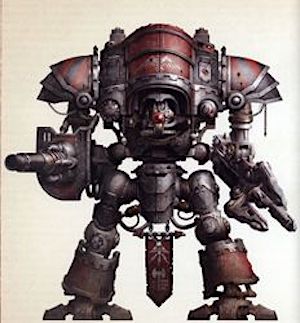 Known to be a savage House, the Knights of Ærthegn hail from a desolate region of Ultima Segmentum rife with barren planets and pirates. Descendant of a long-lost Knight House whose world was destroyed in an unknown calamity, their predecessors becoming reaver lords by enslaving psykers and navigators in order to allow interstellar travel and establish a petty kingdom for themselves. Becoming known as the Wræken Dreor (or pilgrims of blood and ashes in proto-gothic), after the Ullanor Crusade Warmaster Horus dispatched the Luna Wolves to finally deal with them.

Battling the Dreor on the frozen seas of Altus Ferro, Horus himself tore apart the Knight of the enemy commander. After the battle Horus traveled into the heart of the territory and was able to pledge the Knights to their service, renamed as House Ærthegn and taking up a region of space known as the Hrethmael Drift as their domain. Despite being officially pledged to the Imperium, the House continued their old ways and pillaged non-compliant sectors of space. They did little to change their brutal ways and established a vicious and undisciplined reputation in Imperial service under the command of their chieftain, Kynerak Gravewalker. They would frequently provoke duels with other Knight Houses and Freeblades just for an opportunity to spill their opponents blood. For his part, Horus dismissed the Knight’s sour reputation as the work of “rogue elements”. The Household faced no discipline for their behavior despite calls to, particularly after the slaughter and enslavement of 100,000 citizens on Altus-Legia.

Perhaps unsurprisingly, the House quickly joined the forces of Horus during the Horus Heresy and took part in the Battle of the Coronid Deeps. They fought beside Legio Suturvora and Legio Fureans in the Battle of Beta-Garmon. 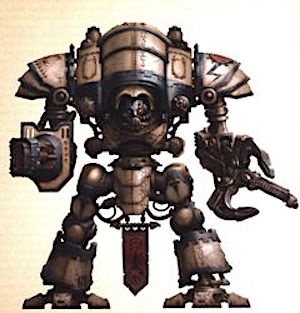 Sworn to the world of Xana during the Great Crusade, the house followed their vassal-lords into rebellion against the Emperor in the Horus Heresy. Even before the Heresy, the house had a sinister reputation.

Knights of the House Malinax took part in the Burning of Prospero.

After the Xana Incursion, House Malinax joined their overlords in raiding both Imperial and traitor assets. They eventually fled with their Dark Mechanicum liege-lords into the Eye of Terror at the end of the Heresy, and now operate from the Daemon World of Xana II. They also fought beside Legio Tempestus in the Battle of Beta-Garmon.

Learn More of the Renedage Households

~ Meditate on the weakness of the mighty, to better steel your soul against heresy.

Author: Larry Vela
Dad, Gamer, Publisher, Pilot, Texan. All games all the time since junior-high. I started BoLS Interactive in 2006. I’m a lifelong tabletop & RPG gaming enthusiast, and internet publisher working to entertain and inform my readers every day. I've been playing RPGs and Tabletop Games since the 1970s. I'm been playing and covering Warhammer and Warhammer 40K for over 35 years.
Advertisement
Imperial Knights Lexicanum Lore Warhammer 40k
Advertisement 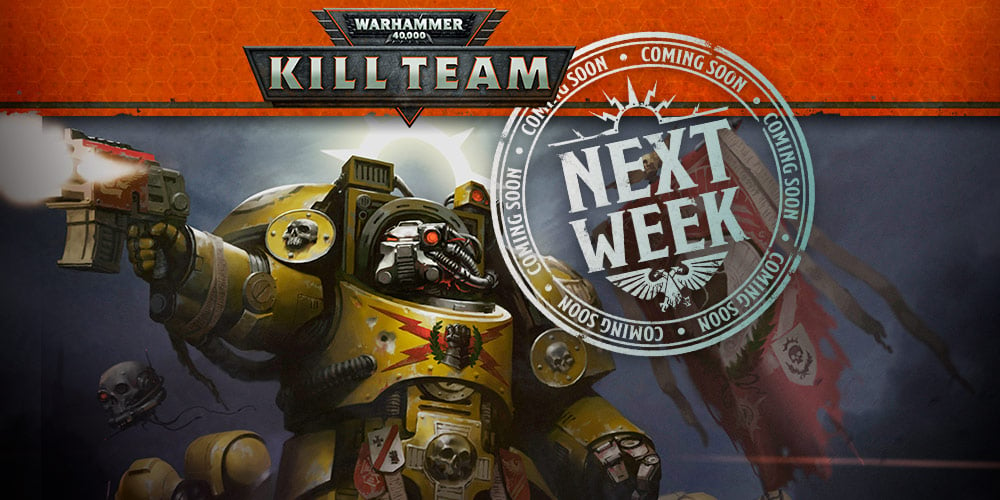