A whole bunch of new weapons, upgrade sprues, and special rules are on their way for Adeptus Titanicus, so come see what’s in store.

Knights are about to have their day in Adeptus Titanicus. Aside from that one amazing sentence, there are also new weapons, upgrade sprues, and rules headed your way soon–and thanks to GW’s Stream and a handy B&C user, we’ve got a look at what’s coming down the pipe for your favorite big stompy warmachines.

First up, let’s take a look at the new Knights. Pics of these kits are via Warhammer TV: 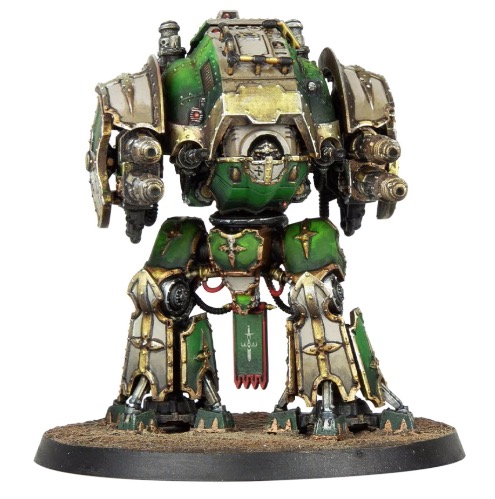 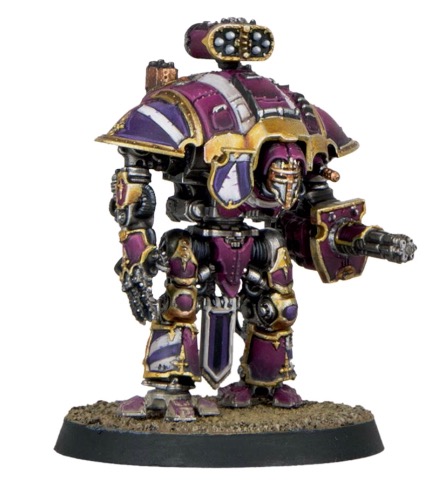 This Knight is probably my favorite, not only because of its power claw–but let’s not forget that giant robot melee weapons are the very best as far as I’m concerned–but because it really does feel like someone just scaled down one of the Reaver Titans so you could have a little tiny version hanging around a bigger one. Here’s a look at the sprue you’ll need to build this fella: 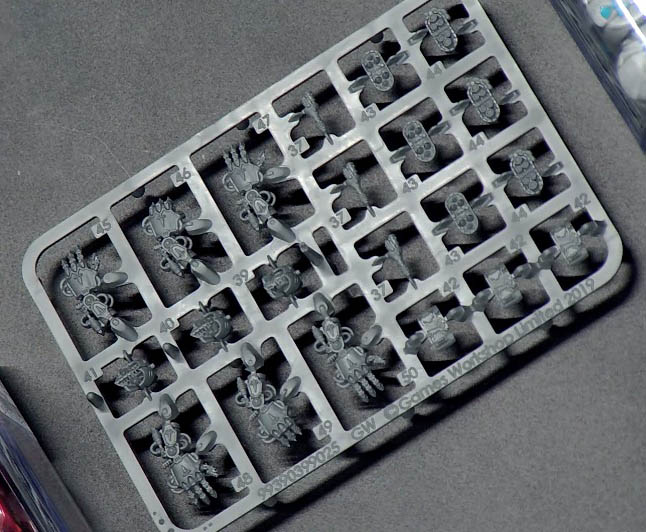 The new Knight Accessory sprue to make that purple guy up top.

-The Traitor & Loyalist Stratagem cards are going to include the Legio-specific Stratagems from the Legio rules sections 26 cards in each deck
-Tempestus is in the Traitor deck
-Each deck seems to contain some neutral stratagems (Traitor has the Titan-hunting Infantry) so if you really like using the cards it may be worth grabbing a pack of each?
-Each Character Terminal has a special rule at the top and a bit of history on the back, as well as which Legio the particular Titan belongs to

-Ibn Faruq (spelling may be way off), Reaver of Fureans, which comes with the Hunting Auspex upgrade for free and a special rule called Kingslayer, which gives it +2 on armour rolls vs Titans of scale 10 or higher
-Vestiti Ferrus, Reaver of Vulpa, has Iron-Clad: when this Titan suffers a devastating hit, roll a D6. On a 6 the Titan loses 1 structure point instead of 2
-Mantellan Foreman (?) of Tempestus, has Solitary Hunter (cannot be part of a Squadron, but when issued First Fire Orders it can fire all weapons… so this is 100% the Warhound that you want to air drop)
-Hammer of Tyrants, Warlord of Krytos (skipped reading rule)
-Penumbral Reaper, Warlord of Mortis, has special rule Towering Exemplar and a fixed load-out that includes an Arioch Claw, Lasblasters, and Sunfury
-Lucius Praetorian, a Reaver of Astorum, special rule is Will to Survive: +1 to all Repair Rolls made by this Titan
-Dawn of Enlightenment, Reaver of Defensor, special rule is Beseech the Emperor: forgo movement in the movement phase but count it as an activation to restore void shield by D3 or 1 if they were collapsed. Can’t be used if you have VSG Burn-out
-Ignis Ferrus, Warlord of Atarus, special rule represents an advanced reactor designed to contain the especially intense fury of the Titan’s machine spirit (they didn’t name it): advance the reactor marker once when you roll 2 on the reactor dice, but if you get an AMS it’s always Wrathful
-Bellator Magno, Warlord of Gryphonicus, special rule is Martial Pride: may push the reactor in the combat phase to re-roll any hit rolls of a single weapon (Andy also mentioned Gryphonicus is at Terra if that’s of interest to anyone)
-Auracundis, Reaver of IGNATUM!!! and special rule is Hear my Fury: forgo movement in move phase (still counts as activation) to pick an enemy Titan w/in 18″. The target must make a command check, and if they fail their order is removed. This Titan was included especially for one of the Titan Owners Club/House Taranis Club guys that regularly shows up at WHW. He has a Titan that he’s rigged to play audio and.. well I’ll let him say it (from the chat): “yeah after sounding the warhorn as I put my phone back into my pocket I hit my iTunes and started playing Erasure Give a little respect… it was silent for a moment then everyone started singing along. Lol” Everything they’re showing is available in the next month to 6 weeks “or something like that”

-Imperial Knight Terminals (Cerastus and Questoris) are being reprinted but Andy said it could be August before we see them, but the Acastus terminals are releasing alongside the kit

-Someone asked about the Lucius pattern head/shields or a possible plastic Lucius armor set, to which Andy replied possibly the head. He said that if they do a full Lucius pattern, he doesn’t want to just do it as upgrade kits but rather as an entirely new kit because it’s structurally very different. But “if we’re making a Lucius pattern Warlord, then we’re not making something else”

-There was a question on rescaling between 40k and AT using CAD. Andy said it makes it easier, but it’s still a complex process. The 28mm Warlord took Daren Parrwood about a year. For AT, Chris Drew was designing the AT Warlord kit for resin, but when Blood Bowl blew up they switched it to plastic and they had to start redesigning again. It’s down to around 6 weeks in the design phase, before it goes to production and steel cutting of tools. The design is actually the shortest part of the process. 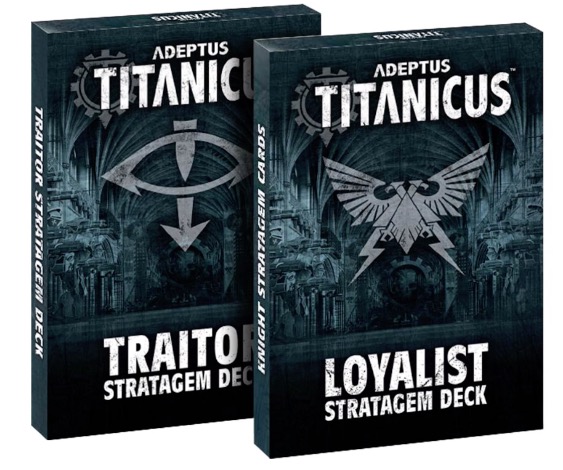 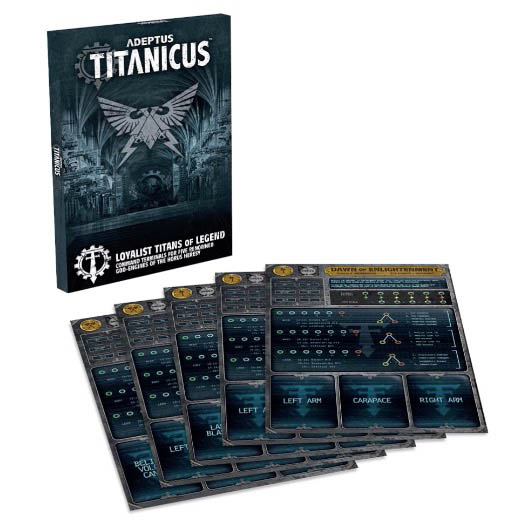 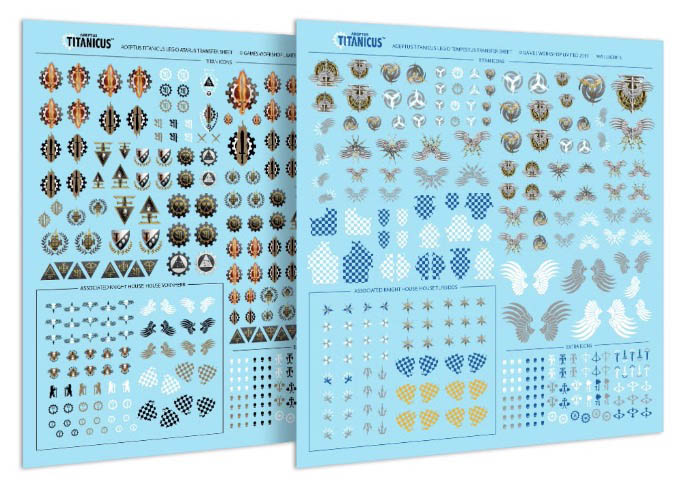 ~ Looking great! What do you think of these new sprues and rules? Let us know in the comments!