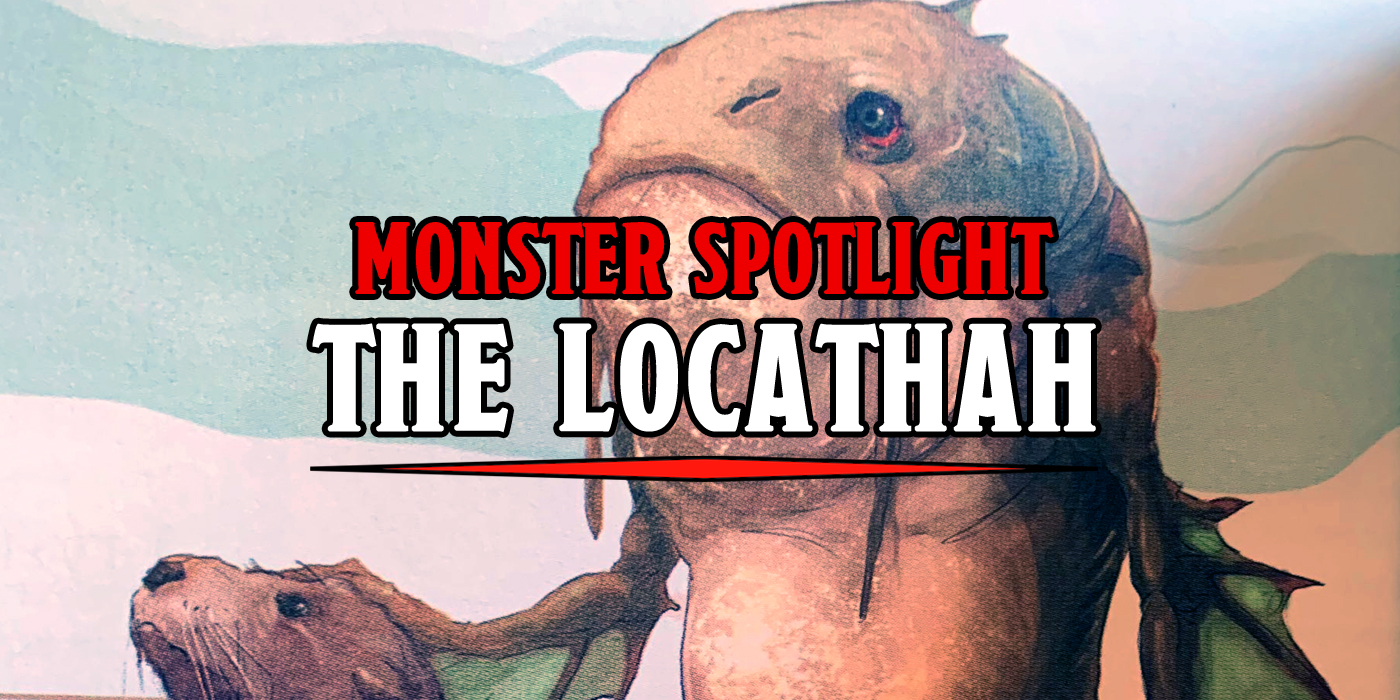 Aquatic adversaries and allies abound again, this week we’re taking a look at the Locathah–a race of finned fish people who are the stars of Saltmarsh.

It’s MerMay and that means more aquatic monsters for you–this time we’re taking a look at the Locathah, who are swamp things made fishmen, and who are probably one of the original inspirations for the Murlocs out of Warcraft. Just looking at an old school one you can start to here the wrgrrblrgblgrblgrr of the Murlocs. 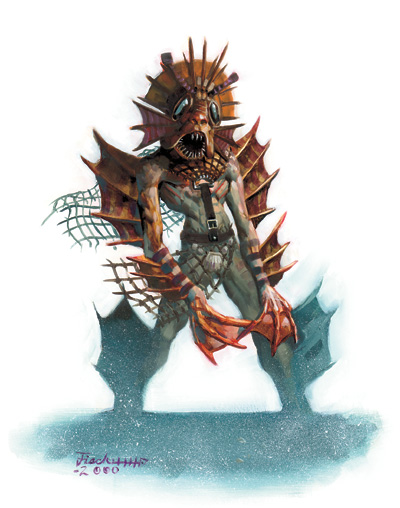 And here’s a Murloc for comparison. 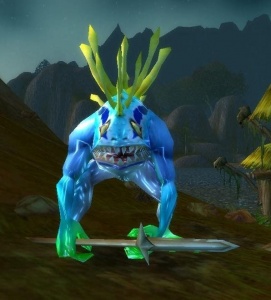 But they have faded from D&D’s more recent editions. Until the Ghosts of Saltmarsh, which reintroduces the Locathah–they’re back and looking better than ever. We’ll get to that in a minute, but first, let’s step back through the misty veil of history and take a look at the Locathah. They first appear in D&D’s pre-history, as part of Dave Arneson’s Blackmoor supplement, which is also where you’ll find such legendary monsters as the Umber Hulk or Ixixchatl.

These nomadic people ride eels and are found along the canyon floors roaming the depths in search of food.

And that’s all they get–along with a combat entry and stats for a giant eel–they were basic enemies that could do a d6 damage and breathe underwater. But that’s about it. 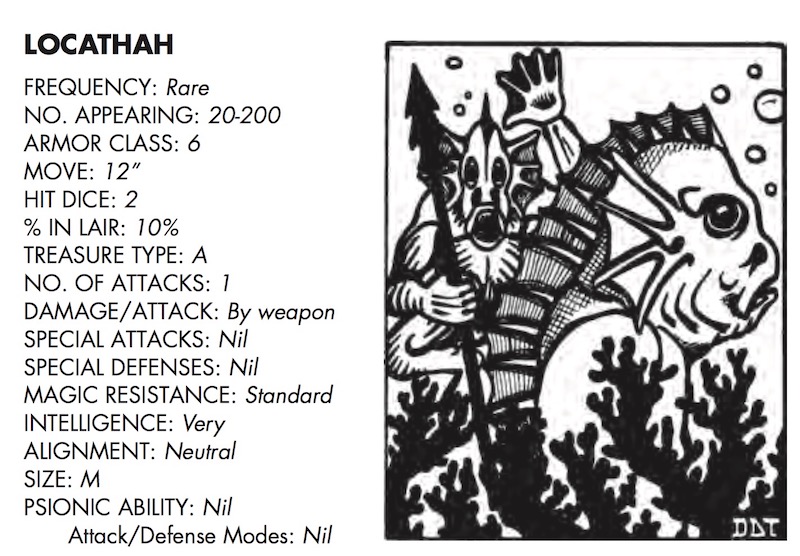 In 1st Edition, however, they get a little more background. They still always ride giant eels, but now they have flanking tactics and come with leaders. 1st Edition players were meant to encounter these in groups, with at least 20 being the minimum size for a decent encounter. In this edition, they live in castle-like undersea rock and make use of aquatic wildlife to protect their homestead. 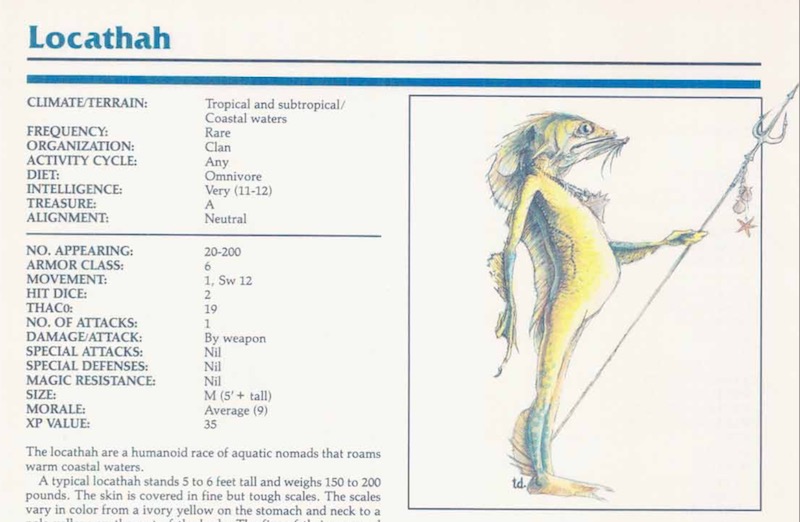 2nd Edition Locathah look a little more ridiculous but have a much more developed society. Whoever was working on the fish-headed incarnation of these underwater nomads took a liking to them. Now they’re civilized on par with surface-humans. You might encounter a band of Locathah with moray eels or Portugese men-o-war protecting them. In this edition, they include clerics and priests and are basically encountered as an underwater ally or distraction. They defend their territories and might be trying to rescue their fellows, taken as Captives, but they aren’t meant to fight the players unless in large groups.

This fits their role in the Saltmarsh series, where the local Locathah are potential allies for the players to recruit as part of their Lizardman alliance. But they might also fight or flee, depending on how the players treat them.

3rd Edition Locathah are a little more of a threat. They can breathe on land as well as in the water–and reflecting their aquatic nature are proficient and armed with crossbows, which they’ll use to start an encounter. And as they’re really only a low-level threat, this makes them potentially deadly. 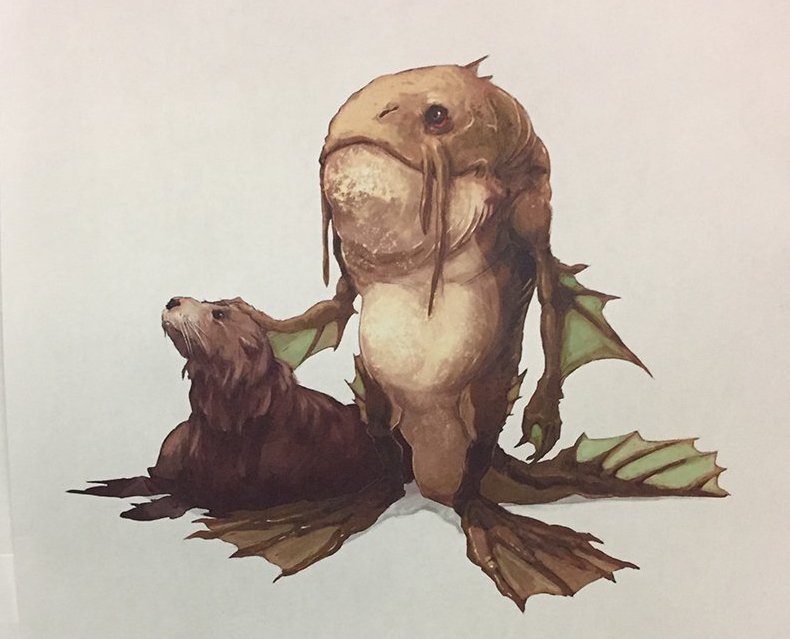 But perhaps this lackluster lore has kept them out of the more recent editions. It’s only recently that we’ve seen the new and much improved Locathah. Look at this fish friend with accompanying seal. How could you not want to have this encounter? It remains to be seen how they fit into 5th Edition, but we’re looking forward to it.