Last week we reported on a D&D tie-in module, meant to promote the new Elder Scrolls Online expansion, Elsweyr, and how it appeared to be plagiarized from a similarly-themed module, The Black Road. Now that investigation seems complete, and an apology has been issued via the official Elder Scrolls Online Twitter account seen here:

Thanks again to everyone who highlighted the issue of alleged plagiarism in relation to the ESO Elsweyr tabletop RPG promotion. Our intention had been to create and give away a unique Elsweyr inspired scenario that could be played within any popular tabletop RPG rule set. (1/3)

In the ensuing 3 tweets, the original authors of The Black Road, Paige Leitman, and Ben Heisler aren’t addressed except as having requested that the Elder Scrolls module not be shared around. Adventurers interested in seeing what was in the module might turn their attention to the Black Road adventure–available on the DM’s Guild for $2.99. This is the work of the original authors, and aside from the slightly rewritten segments, here’s a snippet: 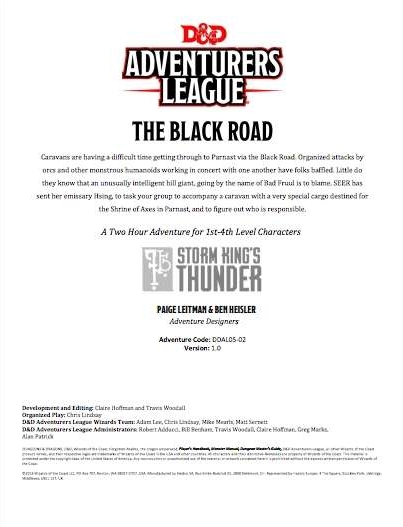 Parnast, a small town in the Greypeak Mountains, was the site of infiltration by the Cult of the Dragon a year ago. Since a group of cunning adventurers freed the town from the grip of the Cult of the Dragon, the town has grappled with its identity and townsfolk have often turned against one another under suspicion that the Cult never left. Seeking to stabilize the area, the Shrine of Axes put out the word that they were looking for a new statue of Angharradh, also known as the Triune Goddess. She is a three-fold deity and in the context of the deities represented at the shrine, represents Spring.

That word reached an artisan who had gone into exile in the Anauroch Desert. A tenday after the rumors hit the outpost of Vuerthyl in the Anauroch, the statue appeared outside one of the larger tents. The caravan master Azam, an agent of the Lords Alliance, saw this as an opportunity to increase his favor with the nobility. He reached out through channels and oddly, a pseudodragon agent of the powerful spymaster SEER was sent personally. Not only does the pseudodragon Hsing oversee the planning of the transport, but also in hiring a specific group of adventurers.

Hopefully, the Elder Scrolls Online and publisher Bethesda will continue to explore their tabletop options. The Elder Scrolls is a world ripe for a tabletop RPG exploration–and the reason that 9 out of 10 tables have had to deal with “an arrow to the knee.” And Bethesda has gone out of their way to point out that the plagiarized module was in no way reflective of what will appear in the final video game, which contains Alfred Molina.