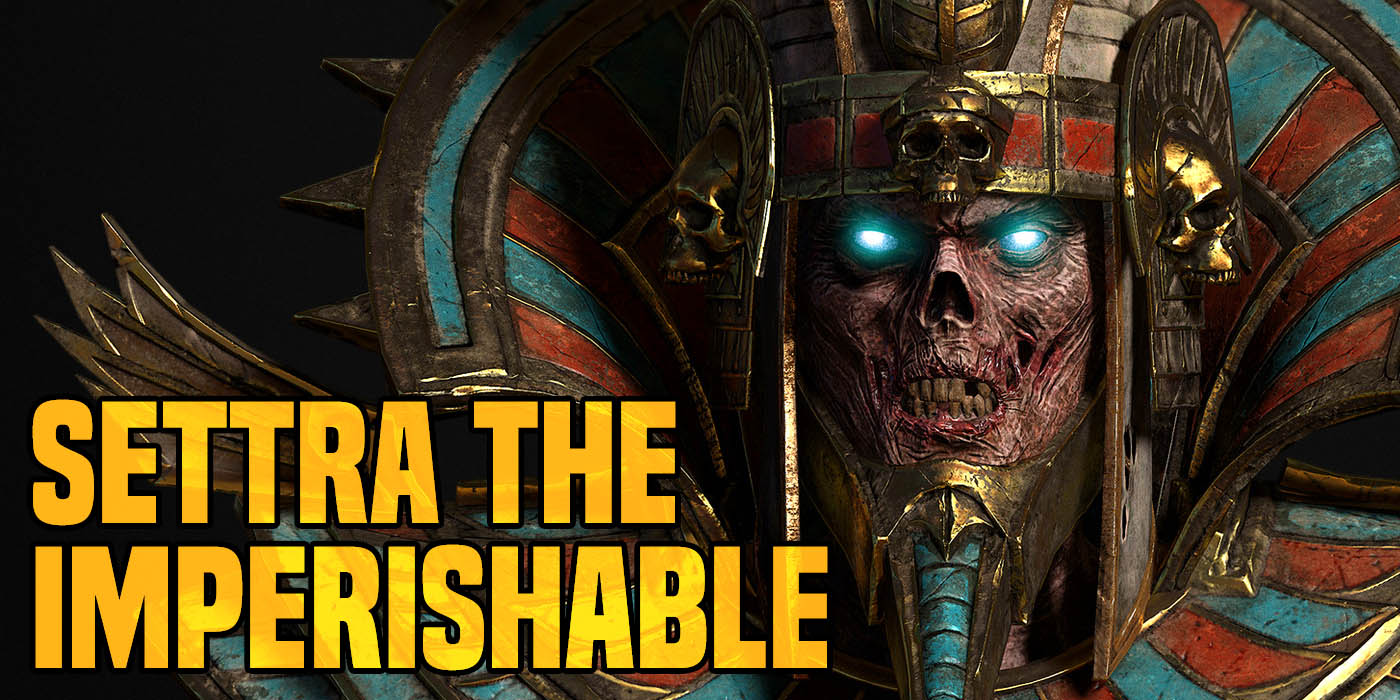 Come Loremasters and learn of the one who refused to serve, and swore to kill the gods of Death and Chaos themselves for their impertinence.

Settra the Imperishable was a king of Khemri. Born in a time when Nehekhara was plagued by drought, famine, disease and war he was determined to lead his people to greatness. He was an arrogant, vain and tyrannical ruler, but also especially devout and instigated the building of many great temples so as to earn the favour of the gods. On the first anniversary of his coronation he beseeched the gods to restore Khemri to its former glory and to give him the strength to unite all of Nehekhara under his rule. He sacrificed his own children in a grand ritual to demonstrate his dedication, commitment and worth. The gods were pleased and when the Great Mortis River flooded for the first time in decades Khemri was purged of its sickness and collected a harvest of unparalleled size. Seeing this as evidence that he was the chosen of the gods Settra became the first Priest King of Nehekhara.

Between the great legions of Khemri and Settra’s own ruthless military genius he swiftly conquered the other cities and became the first king to unite all of Nehekhara under his rule. He established an empire and instated various leaders in other cities to provide tribute. As the undisputed king of both Khemri and Nekhara as a whole he was adored by his people as the land entered a golden age. Still not content, his armies set sail in mighty war fleets and conquered lands across the globe, with much treasure and slaves brought back to labour on the great monuments that Settra commanded built to glory both the gods and himself. 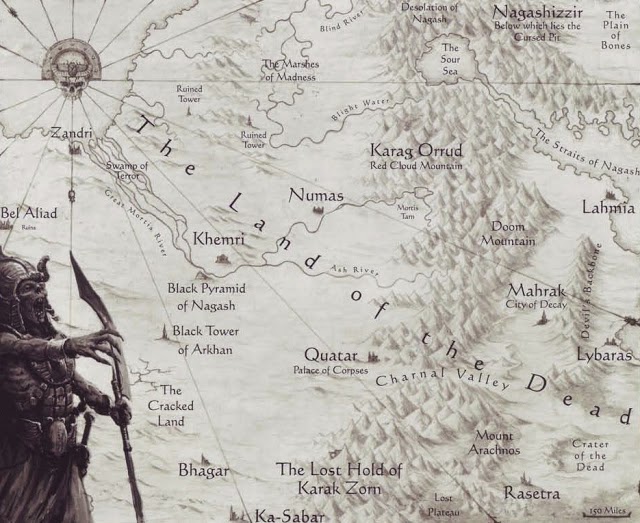 For all his conquests, he was still frustrated. He knew that there were still lands out there to claim, more than could ever be reached in a single lifetime and also that one day death would take away from him all he had created. In his supreme arrogance he vowed that the grave would never have him, and that he would cheat death. He set his greatest, wisest and most powerful priests on the mission to find a way to achieve this. This group would become the Mortuary Cult a priesthood dedicated, not to any god, but rather to discover the path to life eternal.

The priests searched for years and discovered many incredible things, including the art of mummification, but could not find what Settra sought. He lived far beyond any mortal span thanks to their arts, but he could not be kept alive indefinitely. On his death bed, the priests promised that one day he would return and rule over another golden age, a paradise. He died with a curse on his lips and his body was interred in a great pyramid of unsurpassed majesty and bound with the mightiest incantations of power and preservation the cult knew, until his appointed day of awakening. He was succeeded by King Ahtaf I 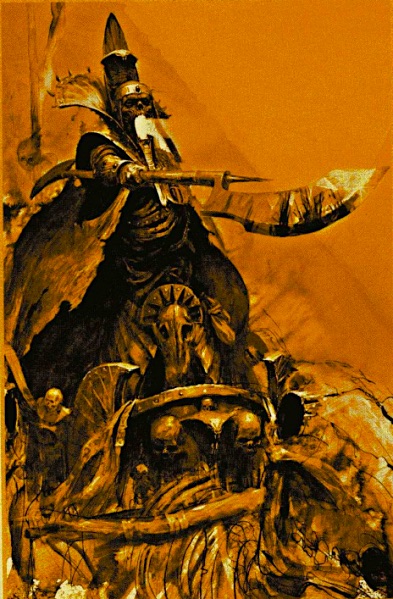 Centuries later the Usurper King Nagash cast a great ritual over the entire of Nehekhara, causing countless dead to rise from their graves bound to his will. However, with the Great Necromancer’s assassination at the hands of Alcadizaar they were left with no guiding force. Interestingly the hundreds of risen Priest Kings found they had been brought back with their minds, memories and willpower intact- though without the golden bodies and a paradise to rule they had been promised. Immediately they went to war with each other, various dynasties and even families battling for control of their tomb cities. Desperate to stop these Tomb Kings from finishing the work Nagash started Khatep, Grand Hierophant of the Mortuary Cult and oldest, wisest and most poweful of their kind breeched the tomb of Settra so he could restore order.

In death Settra was no less mighty than in life and he quickly dominated or destroyed all who would challenge his absolute authority. Even the so-called Liche King Arkhan the Black was forced to flee before him. After taking control he summoned his priests to explain what had happened. Hearing the tale of Nagash and the failure of his cult to deliver on their promises of an eternal golden age Settra cast his priests away, knowing that they had lied to him and kept most of their powers to, and for, themselves. Khatep in particular was exiled from Khemri and Settra’s presence- on pain of his ultimate destruction. Settra vowed to restore his empire to it’s former glory and create the paradise on earth he so desired himself. He called this his Reign of a Million Years. 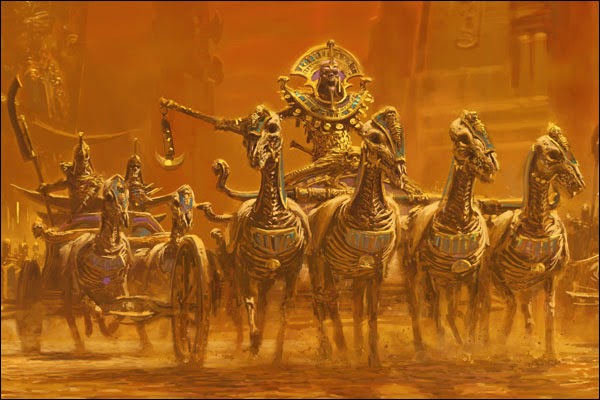 Reign of a Million Years

Settra ordered many Tomb Kings to return to their chambers and await the call to return to life, for they would only create unrest and disturb the peace. He commanded that contact with the living be forbidden (unless he commanded it himself of course) and thereafter the Tomb Kings mostly only rode to war in their own defense or to reclaim relics stolen by treasure hunters from around the world.

As well as marching to war against the regular dangers of marauding greenskins, greedy treasure hunters and crusading templars, one of the greatest threats to Nehekhara was the return of Nagash. 1,111 years after his assassination by Alcadizaar Nagash returned to the land of the living, seeking to reclaim his throne in Khemri- In particular Nagash sought his Black Pyramid which dominated the Khemri necropolis. The Tomb Kings immediately followed Settra in his campaign against the Usurper. Leading the united strength of Nehekhara against the foe that brought low his mighty empire Settra defeated Nagash and drove him back north to his fortress of Nagashizzar.

Nagash’s vizar, Arkhan however was a different story. Returning to Nehekhara, the Liche King reclaimed his Black Tower and used it as a power-base to establish himself in the Land of the Dead. His repeated raids and incursions, while not a major threat, soon became more than just a mere nuisance. Repeatedly Settra would be forced to do battle with Arkhan and whilst he had a vastly superior sense of strategy and better troops at his command and their battles always resulted in a stalemate as he could never hope to match the great necromantic power of Nagash’s first and most loyal follower. So Arkhan would submit to Settra’s authority and swear fealty before once again defying him just a few short years later. This stalemate might have been broken had the other Tomb Kings assisted but most considered Arkhan a valuable, if untrustworthy, ally.

Eventually Settra felt that his restoration project was complete and once again set his sights on the lands beyond his own. He declared an age of expansion and massed the armies to expand Nehekhara beyond its previous boundaries and make the name of Settra once again feared across the world. This however never came to be. 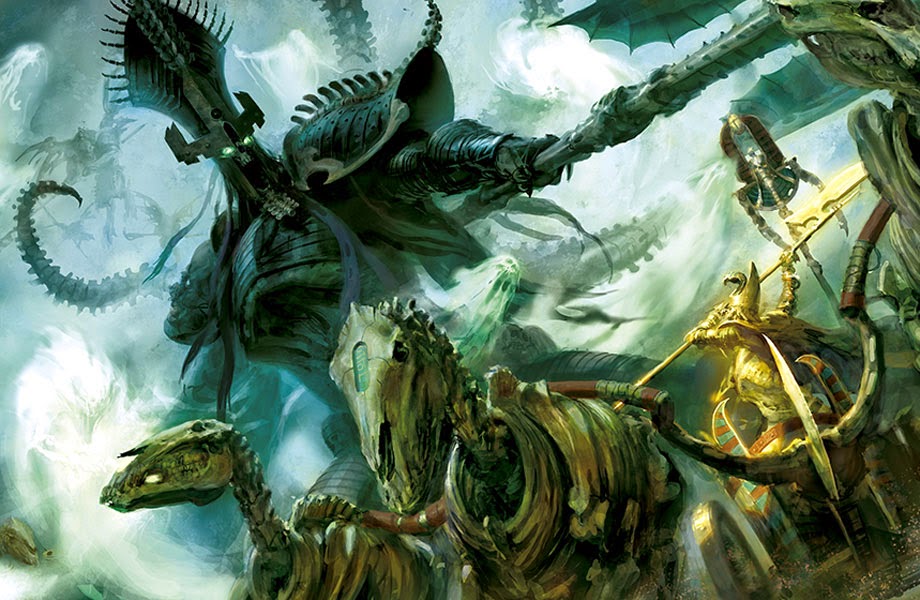 Before Settra could begin his expansion, he discovered that Nagash had once again returned. The forces he was going to use to spread his rule were instead mobilized to defend Nehekhara. He commissioned all the best troops from various cities to defend Khemri, knowing Nagash would seek his Black Pyramid, and ordered Nehekhara’s best architect, Rahmotep, to build mighty walls around the city. The forces of Nagash did indeed invade Nehekhara with Khemri and his pryamid as his final goal, though there was no sign of the Great Necromancer himself. During the final battle for Khemri, Khatep broke his exile to tell Settra about the Destroyer of Eternities, a weapon that may be able to permanently stop Nagash. Settra listened then executed him for breaking his exile. He didn’t find the blade in its place, as unknown to him Apophas stole it (at the behest of a Skaven assassin) to kill Nagash and claim his soul for Usirian, god of the underworld. He later fought Arkhan in 1-1 combat and bisected him. The halves were taken to the priests who could stop Arkhan from being reanimated, but one of them was a traitor who stopped the others, and Arkhan’s capture was revealed to be a plan to smuggle Nagash into Khemri without having confront the army at the gates. From inside the city Nagash was able to enter the Nehekharan underworld where he battled and consumed Usirian, finally restoring himself to his fullest power.

Settra and his forces were on the verge of defeating Nagash’s armies when Nagash revealed himself. Nagash, now a true god of death, was far too strong for Settra’s armies who were obliterated by his dark magics. Settra alone was left to face the Usurper but without the blessings of Usirian to protect him was swiftly overpowered. Nagash gave honor to Settra and offered him a place as one of his Mortarchs, to which Settra replied; “SETTRA DOES NOT SERVE… SETTRA RULES!” Nagash responded to this arrogance by dismembering Settra before leaving his head half buried in the sand, helpless to do anything but watch as Nagash’s forces razed Khemri to the ground. 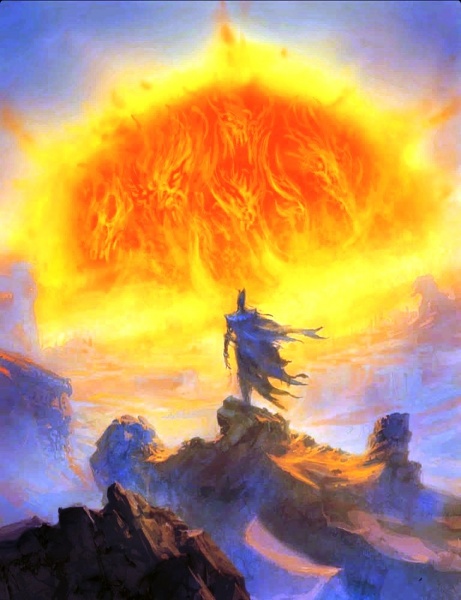 Settra restored by the Powers of Chaos

After an unknown amount of time Settra was offered the chance for revenge by the Chaos Gods. He was restored in exchange for agreeing to slay Nagash in their name. To this end he traveled north and joined the armies of Archaon at Middenheim. He earnt his place by defeating Kholek Suneater in a battle that lasted four days and flattened much of the forest surround Middenheim. When the united forces of the incarnates attacked Middenheim to try to stop Archaon from destroying the world Settra confronted Nagash during the final battle. He pointed his khopesh at Nagash, and called him a usurper before leaping towards him. Infact instead of attacking Nagash Settra beheaded a Chaos daemon that was about to attack Nagash from behind. He explained to Nagash that, “NOBODY COMMANDS SETTRA.” He told Nagash he would claim his skull eventually, but only after killing the Chaos Gods for daring to offer him immortality and the chance to conquer all realities in exchange for servitude. He then charged into battle against the Chaos armies by himself. He was last seen battling the endless hordes of Chaos as the world was consumed.

~Is it folly to belive that Settra will rise again in the Mortal Realms? Who will he seek vengeance on first?