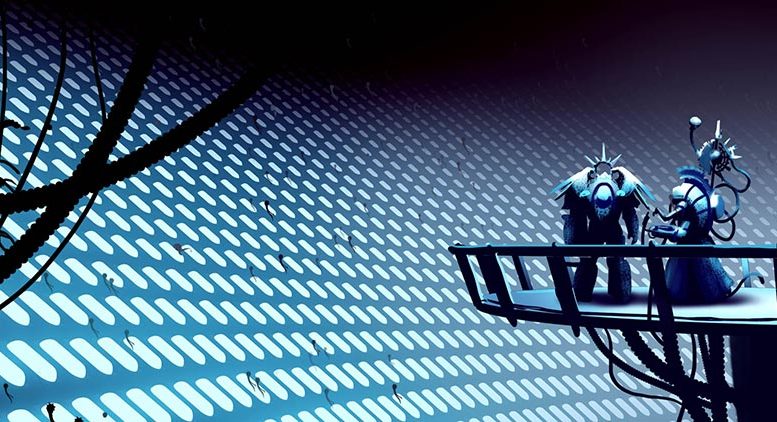 Games Workshop snuck in a few new 40k rules in the Apocalypse Datasheets. Check out these three hidden gems!

We’ve been pouring over the Apocalypse Datasheets to see what we can learn and they have not disappointed. Today, we wanted to go over a few new 40k rules we spotted for some upcoming units. Let’s get started with the simplest of the three – The Skorpius Dunerider. 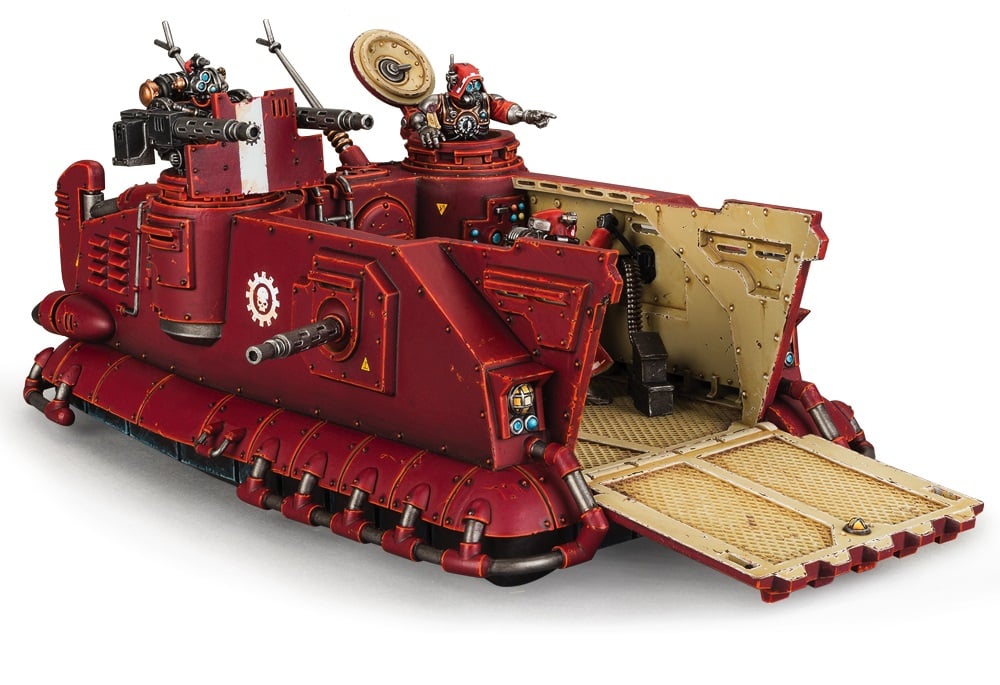 This is the new Hover-APC for the Adeptus Mechanicus. We’ve gotten a look at the basic stats already but here they are in case you missed them:

What we didn’t know what was how many troopers it could transport, but thanks to the Apoc Datasheet, now we know for sure: 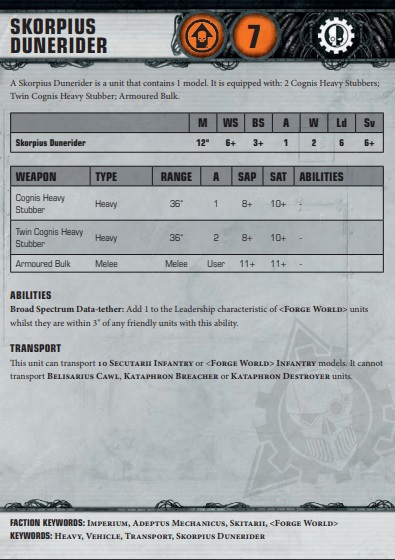 The Transport Capacity is listed as 10 Secutarii Infantry or <Forge World> Infantry. That’s kind of what folks were expecting so no real shock there. It would have been nice if it fit more models, but then it would have probably had a much larger foot-print too.

As far as as that Power Rating of 7 – don’t read too much into that in terms of points. There are several units that have varying Power Ratings for Apoc vs Power Level in 40k vs Points Cost in 40k. A Rhino clocks in at 5 Power Rating in Apoc to give you an example. It seems units with the Fly keyword are paying for it with a Power Rating boost. More on that below…but moving on for now. 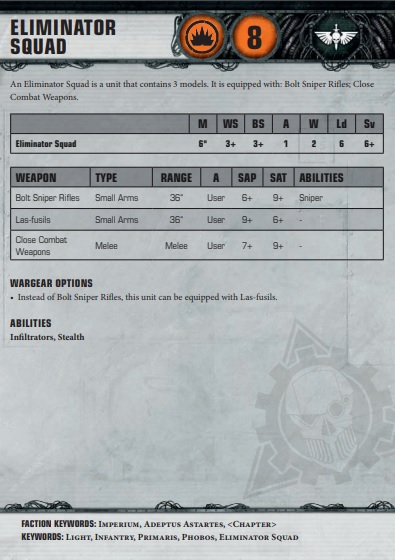 Looking at their Apoc Datasheet, you can clearly see there is a second ranged weapon option called “Las-Fusils” that are very clearly going to be an anti-tank weapon. Looking at the stat-line in Apoc, they are very similar to the stat-line of a Lascannon, with a few tweaks:

The Las-fusils has less range, is classified as  “Small Arms” and has a better SAP and worse SAT by 1 point each. Remember that their Bolt Sniper Rifles are also considered Heavy 1 in 40k so it’s quite possible that the Las-fusils will also be Heavy, too. In the long run, maybe the Eliminators are a Primaris version of Devastators – or maybe they are just going to have an anti-tank role to fill in 40k, also. 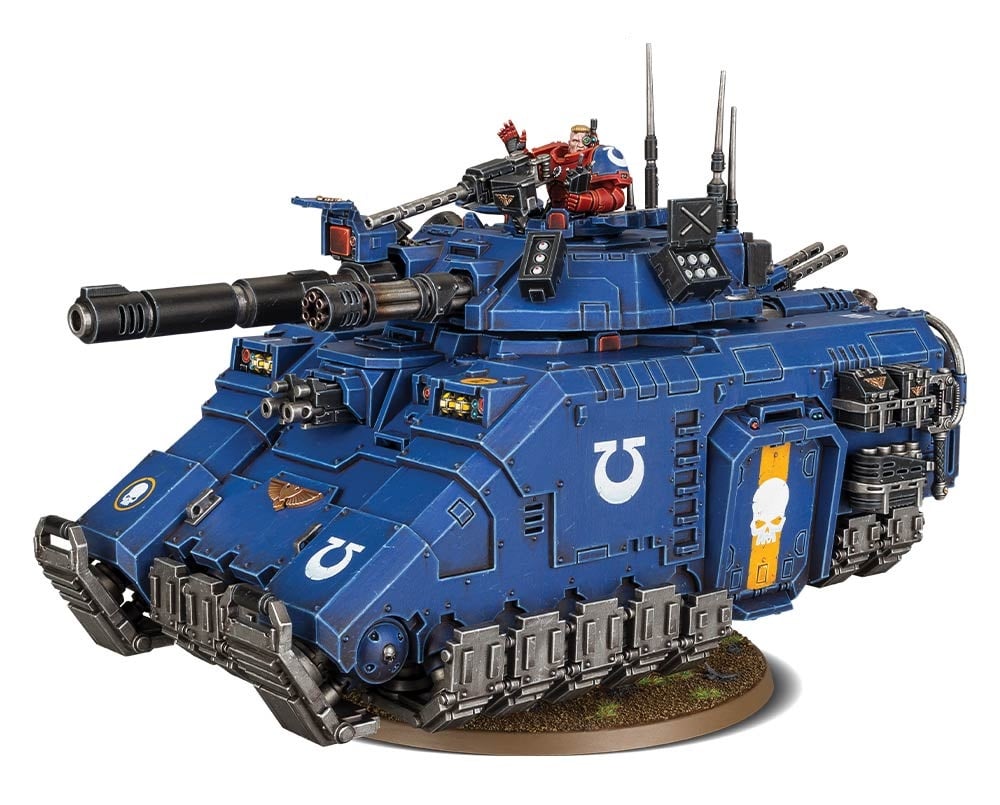 Okay, this last one is a little mind-boggling. So I’ll start with the easy stuff. It’s got a Transport Capacity of 6 – that’s been confirmed in the Datasheet. That’s the new rule and it helps solidify this tank as the “Razorback” for Primaris. However, that’s where things stop being so simple. Take a look at the Datasheet: 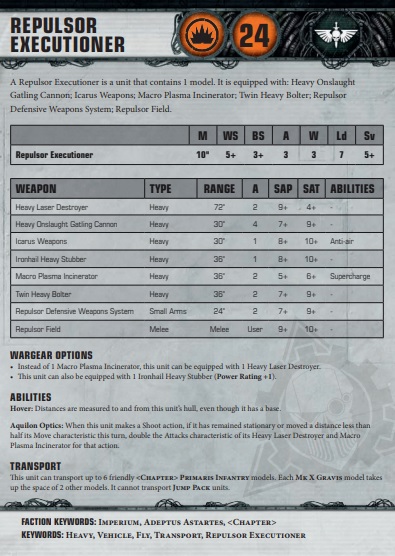 Okay, notice anything…off? Lots of guns, can fire it’s main gun twice thanks to Aquilon Optics, has Fly, Hover, and seems pretty normal right? Well, there is one slight issue we spotted and it’s right at the top of the sheet. That Power Rating is 24! That’s the same cost as a KNIGHT in Apoc! “Oh well that’s just cause it’s a Repulsor and I bet they all cost that much.” Uh…here’s the actual Repulsor to compare it to: 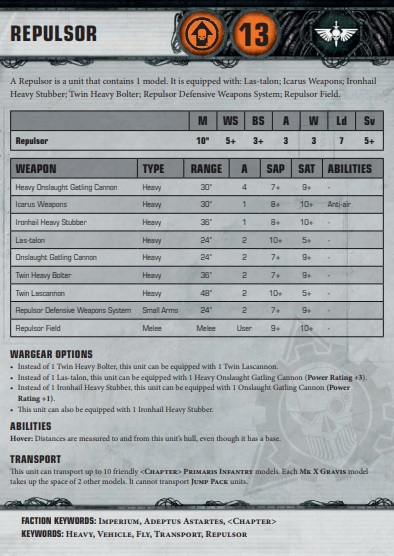 The Executioner is almost double the Power Rating or the original Repulsor. That’s a pretty big jump – so why the mark-up? We think it’s a few factors but it basically boils down to three:

Personally, I think whatever formula they are using to come up with the Power Rating of units in Apoc probably compounded a few of these abilities. We looked at other Flying Transports and while they weren’t quite as costly, they were still markedly higher than their 40k Power Level counter-parts.

It kind of makes sense for these vehicles as Movement and positioning in Apoc is a bit more restrictive from what we can tell. Plus armor protects the infantry riding inside, right? At the same time that’s quite the bump in Power Rating. Considering you can almost field 2 Repulsors and get double the shots/wounds that way, the Executioner does seem a *tad* over costed for Apoc.

Again, we don’t think there is a direct correlation from Apoc’s Power Rating System to 40k Points. If there was the Repulsor Executioner would be pushing 400-500 points (the base Replusor is 210 before weapons and it’s 13 Power Rating – so double that and you’re at 420). And hey, maybe it WILL cost that many points. But if it does, it’s going to be ever rarer than the standard Repulsor. It’s a shame too – it’s getting a fancy new kit right along side the Apocalypse release. Oh well.

We’re still digging in the Datasheet mine – have you found any  hidden rules gems? Let us know in the comments.

Author: Adam Harrison
Writer, Editor, Texas Native, and Austinite for 15+ years, Adam covers all things Tabletop Gaming. Which includes Warhammer 40,000, Age of Sigmar, D&D, Board Games and everything else that involves dice, boards, cards and a table. A hobbyist, player, and collector of miniatures and games, Adam's current obsession are his Death Armies for Age of Sigmar, his Blood Angels and Tyranids for 40k, and his ever growing Arkham Horror: The Card Game Collection.
Advertisement
Adeptus Mechanicus Games Workshop Rules Space Marines Tabletop News Warhammer 40,000 Apocalypse Warhammer 40k
Advertisement 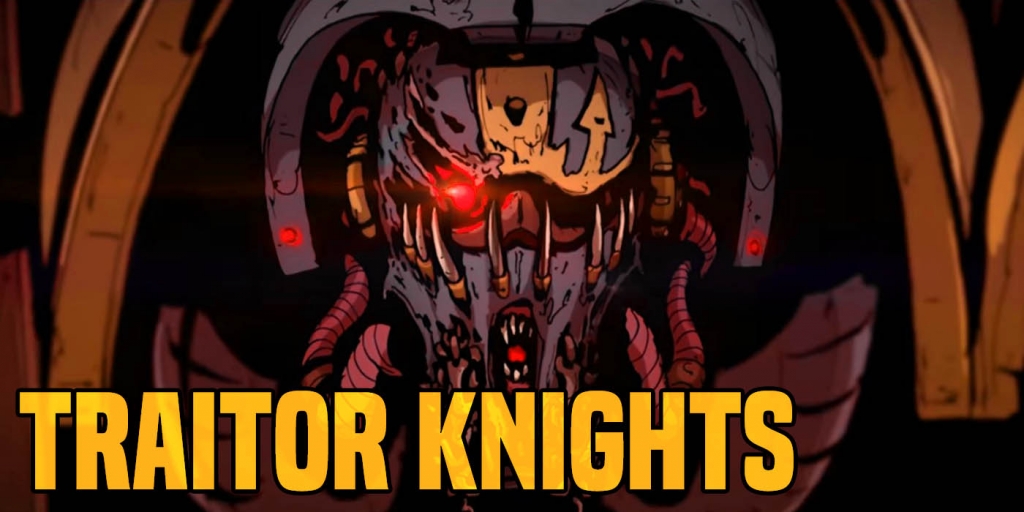