The General’s Handbook is up for Pre-order this weekend from Games Workshop! 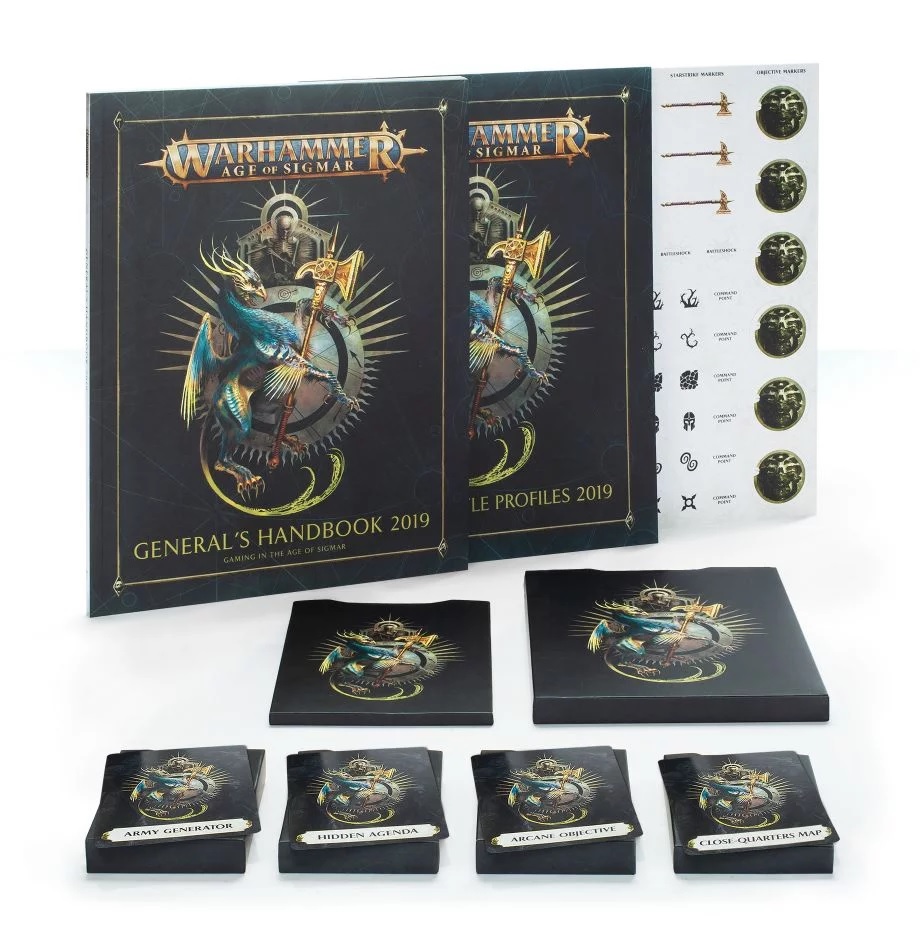 The General’s Handbook is an essential update for all gamers in the Mortal Realms, packed with content for every kind of player. Expanding on the core rules, it’s an essential companion to matched play, toolbox for open play and treasure trove for narrative play all in one!

The Player’s Code – a code of conduct for players of Warhammer Age of Sigmar designed to encourage sportsmanship and good play for all gamers.

New rules for open play, including…
The Open War Army Generator – designed to generate armies for any kind of open play games, making the process of picking an army for your games quick and simple by selecting a small, medium, or large force.

Open War Terrain – presents four different methods of setting terrain up before your games, including an optional terrain generator, and optional rules to provide instructions for where you place terrain on your battlefield.

Open War Close-quarters Battle Generator – turn your dining table into an epic battlefield with rules for playing in limited spaces.

Hidden Agendas – spice up your games secondary objectives that represent the secret goals of the armies fighting a battle.

New rules for narrative play, including:
– Streets of Death – expanded rules for urban combat in the Mortal Realms, allowing you to battle through cities with rules for narrow streets, demolitions, sewers, barricades and more
– Arcane objectives – a table that adds extra narrative dimensions to the objectives in your games
– Regiments of Renown – customise your chosen units to represent their prowess in battle with six tables of special abilities
– Elixia, the Shattered City – a historical setting in the Mortal Realms that’s perfect for small-scale narrative battles
– Raids and Ambushes – thrilling asymmetric battles where one player ambushes or raids a defender.
– Naming your Heroes – generate names for your chosen champions with tables for the Stormcast Eternals, Slaves to Darkness, Khorne, Nurgle, Tzeentch, Slaanesh, Skaven, Ironjawz, Gloomspite Gitz, Idoneth Deepkin, and Nighthaunt
– Mercenary Companies – recruit notorious mercenaries to any army, regardless of Grand Alliance, from Gargants to Fyreslayers

New rules for matched play, including:
– Updated rules for Pitched Battles – including guidance on army size, points limits, battlefield roles, allied units, warscroll battalions and more, essential for tournament play
– 12 Pitched Battle battleplans – each offering their own tactical challenges
– Pitched Battle tournaments – a set of rules designed to help you arrange your own tournaments that can be modified as you see fit
– Meeting Engagements – a set of rules that let you play fast, balanced games on small-sized battlefields designed to provide all the thrills of matched play in less than 90 minutes, plus six new Meeting Engagement Battleplans and suggested tournament rules

Pitched Battle Profiles – a separate, 32-page booklet containing pitched battle points values, unit sizes and battlefield roles for the units you can use in games of Warhammer Age of Sigmar, also including scenery, endless spells, Compendium and Forge World models 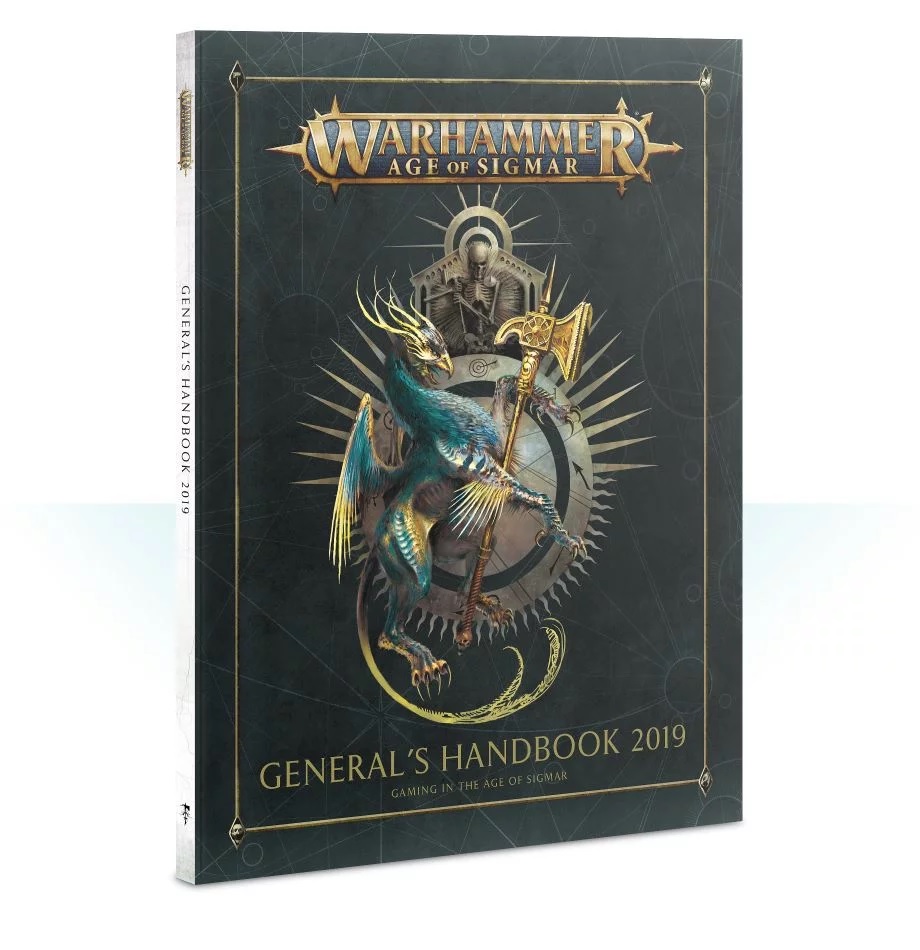 The General’s Handbook is an essential update for all gamers in the Mortal Realms, packed with content for every kind of player. Expanding on the core rules, it’s an essential companion to matched play, toolbox for open play and treasure trove for narrative play all in one! 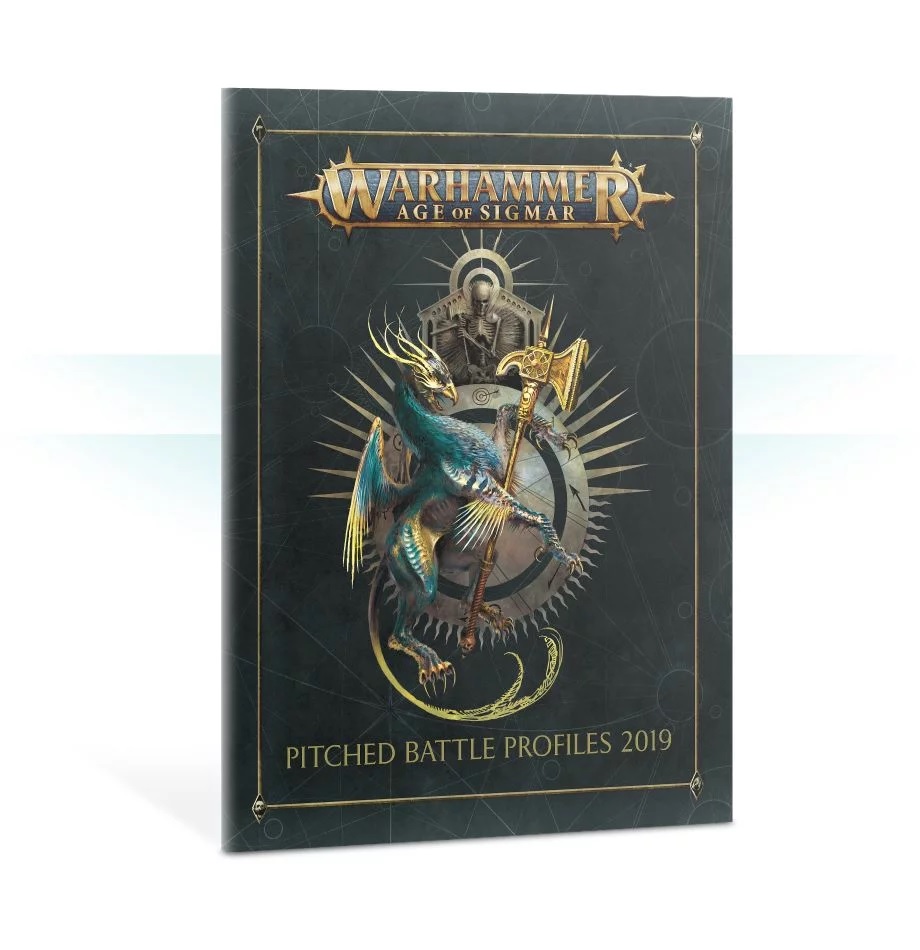 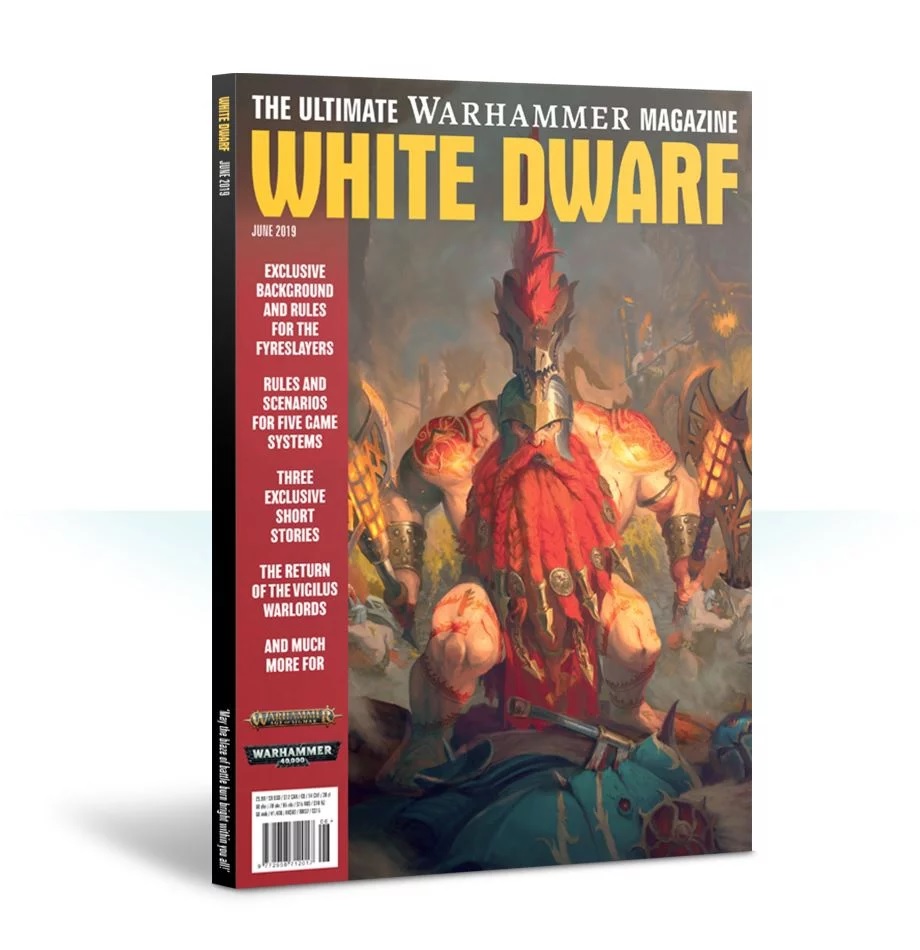 Here’s what you can look forward to in June’s issue:

Worlds of Warhammer
Phil Kelly takes on the gods in his latest column.

Bane of Chaos
The Dwarfers take an exclusive look at the new hack-and-slash computer game, Chaosbane.

Echoes From the Warp
In his regular column, Robin Cruddace discusses the genesis of army special rules.

A Tale of Four Warlords – The Vigilus Warlords
The ever-popular series – this time themed on four warring factions on the surface of Vigilus – continues apace.

The Tithe Comes First
In this short story by Callum Davis, the world of Taenara is isolated by furious warp storms, leaving its Planetary Governor to decide the fate of his people.

Battle Report – The War of Shadows
Marneus Calgar leads a Vanguard Strike Force against the Genestealer Cultists of Dontoria Hivesprawl on Vigilus.

Reignition
In Jordan Green’s short story, Runefather Bael-Grimnir must guide the destiny of his lodge if they are to survive.

The Realm of Beasts
The latest part in the Fantastical Realms series investigates a selection of lore, painting techniques and conversion ideas with a suitably bestial touch.

Rules of Engagement
Taking the reins from Jervis this issue, Sam Pearson talks about Heroes and their heroic deeds.

The Tome Celestial: The Vostarg Lodge
Check out new rules and background for the mighty Vostarg Lodge of Fyreslayers.

Paint Splatter
You’ve read all about the Vostarg Lodge, now learn how to paint them with this handy stage-by-stage guide!

The Deadliest Mission
Explore new rules for battling in the labyrinthine interior of a Blackstone Fortress!

A Deadly Lure
Set out on part one of an exclusive new expedition featuring a Dreaded Ambull.

Hunt for the Lost Ring
Take on an exclusive new campaign for the Battle Companies expansion designed specifically for Evil forces.

Of Heroes and Villains
Author Aaron Dembski-Bowden chats about writing and his own hobby journey.

Son of the Storm World
Aaron also penned an exclusive short story about his favourite Chapter, the Emperor’s Spears.

In the Studio
What have the Design Studio’s hobbyists been up to this month?

Author: Adam Harrison
Writer, Editor, Texas Native, and Austinite for 15+ years, Adam covers all things Tabletop Gaming. Which includes Warhammer 40,000, Age of Sigmar, D&D, Board Games and everything else that involves dice, boards, cards and a table. A hobbyist, player, and collector of miniatures and games, Adam's current obsession are his Death Armies for Age of Sigmar, his Blood Angels and Tyranids for 40k, and his ever growing Arkham Horror: The Card Game Collection.
Advertisement
Age of Sigmar Games Workshop Tabletop News White Dwarf
Advertisement