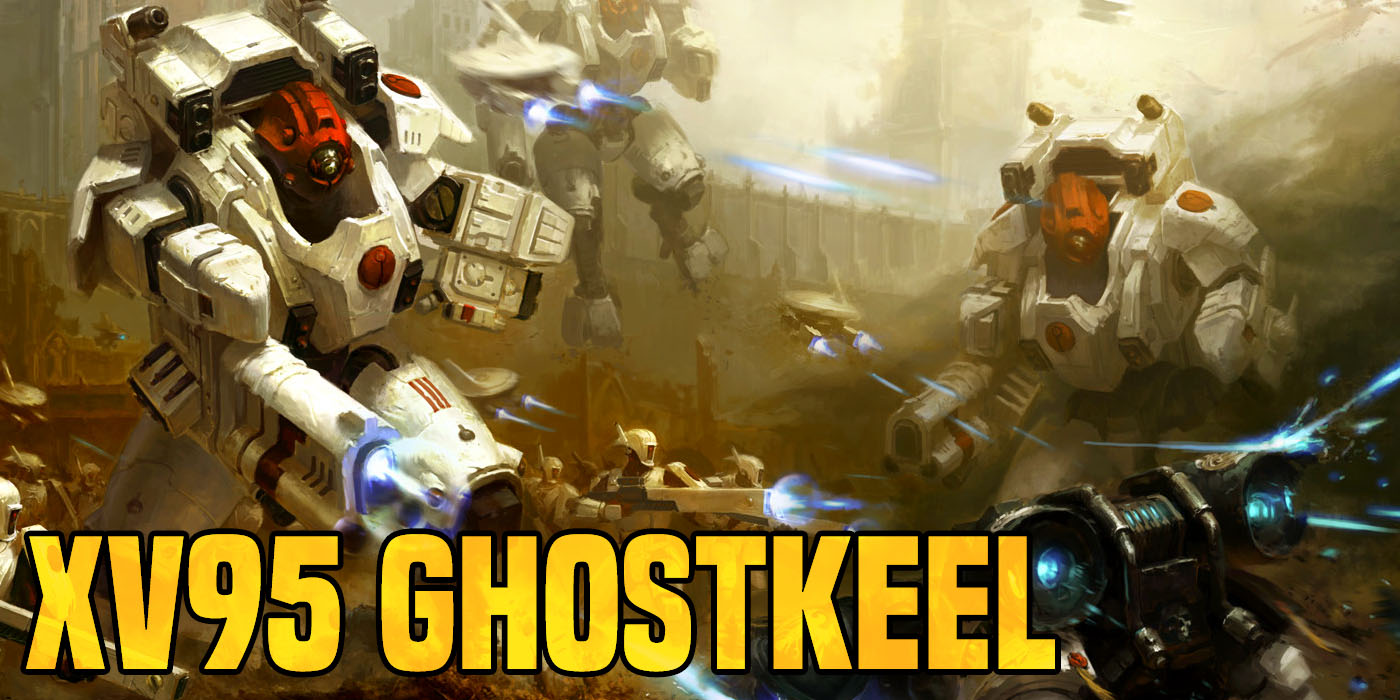 Today we discuss the stealthiest of stealth suits, the Ghostkeel.

Some of the most effective terror weapons in the galaxy, Ghostkeel battlesuits are piloted into the fray by former XV25 Stealth Team veterans. Because these pilots spend so much time in isolation, many form bonds with their battlesuits, preferring their company to the company of their own race. Uses for these battlesuits are varied, as they are not only equipped with a wide array of weaponry and high-tech electronics but also possess “state of the art” stealth systems that allow them to outflank and outmaneuver as needed. 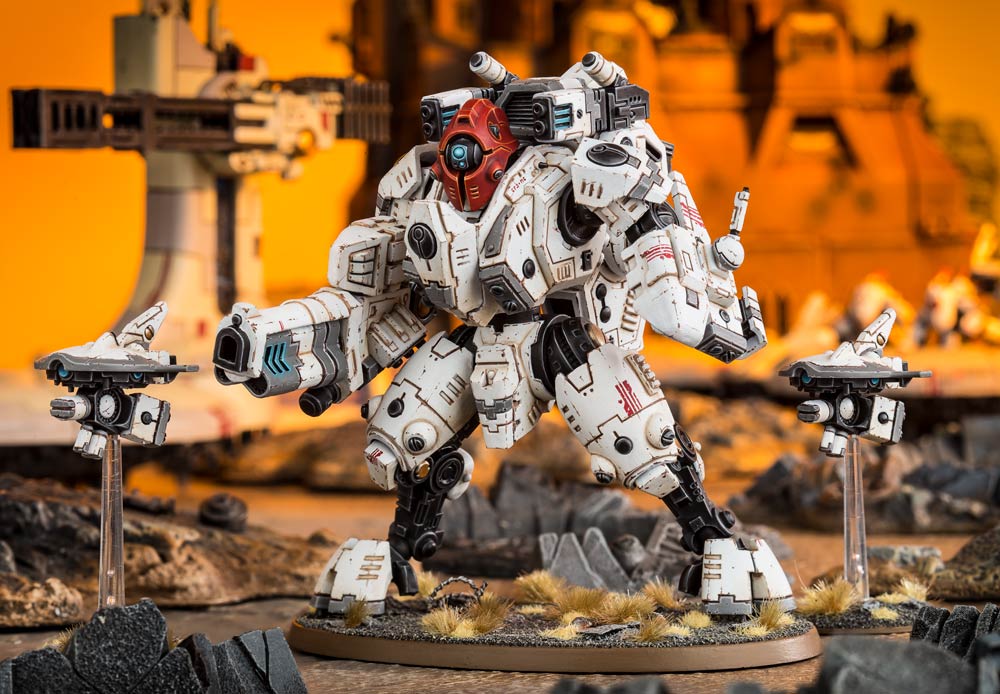 The Stealth Drones don’t have any wargear.

By and large, the Ghostkeel is in about the middle of the pack compared to other T’au units. It’s BS4+ and the fact that it has just enough wounds for it to have a degrading statline means that without the typical T’au synergies and support from Markerlights, it won’t be able to put a big enough dent in your opponent’s forces. Typical loadouts usually involve gearing up for either taking out infantry or vehicles. When wanting to threaten infantry, the loadout of Cyclic Ion Raker and 2 Burst Cannons is best, while when vehicles are your target you’ll want to take the Fusion Collider and 2 Fusion Blasters. You could mix and match but I think it’s probably better to focus on a single roll for a given Ghostkeel (and with all units in general). Both anti-infantry and anti-vehicle loadouts are not as point efficient as other T’au units with that same role, but they can help deepen your ranks in the desired role if you feel like you need it. Due to the fact that the range of the Flamers puts the Ghostkeel very near to losing part of its resiliency, I don’t see the value in them most of the time.

The real appeal and case for the Ghostkeel lies in the fact that it can be at -2 To-Hit, which when you factor that into the Ghostkeel’s T6 and Sv3+, you end up with a target that’s difficult for your opponent to remove. Combine all THAT with the fact that the Ghostkeel can infiltrate and you have the recipe for a wrench in whatever plans your opponent has. The Ghostkeel can either prematurely deploy very close to your opponent’s deployment zone as an obvious target or can deploy reactively to try and harass key units like artillery, tanks without <Fly>, etc. In this respect, the Ghostkeel is a glorified speed bump that is harder to hit and higher toughness than regular Stealth Suits. The Ghostkeel is able to tank somewhat serious firepower and get to where your opponent doesn’t want it to be, thanks to the Infiltrator rule, <Fly> keyword, and the 12″ movement. Whether this is on your opponent’s first turn or during your opponent’s overwatch from your first turn, this will require your opponent to dedicate significant resources to keep it from being a disruption. By being hyper aggressive with a Ghostkeel, you can demand that either your opponent focuses the Ghostkeel (which won’t inherently won’t be super lethal on its own) or you can disrupt their plans by charging their units to make them fall back/getting in their face. 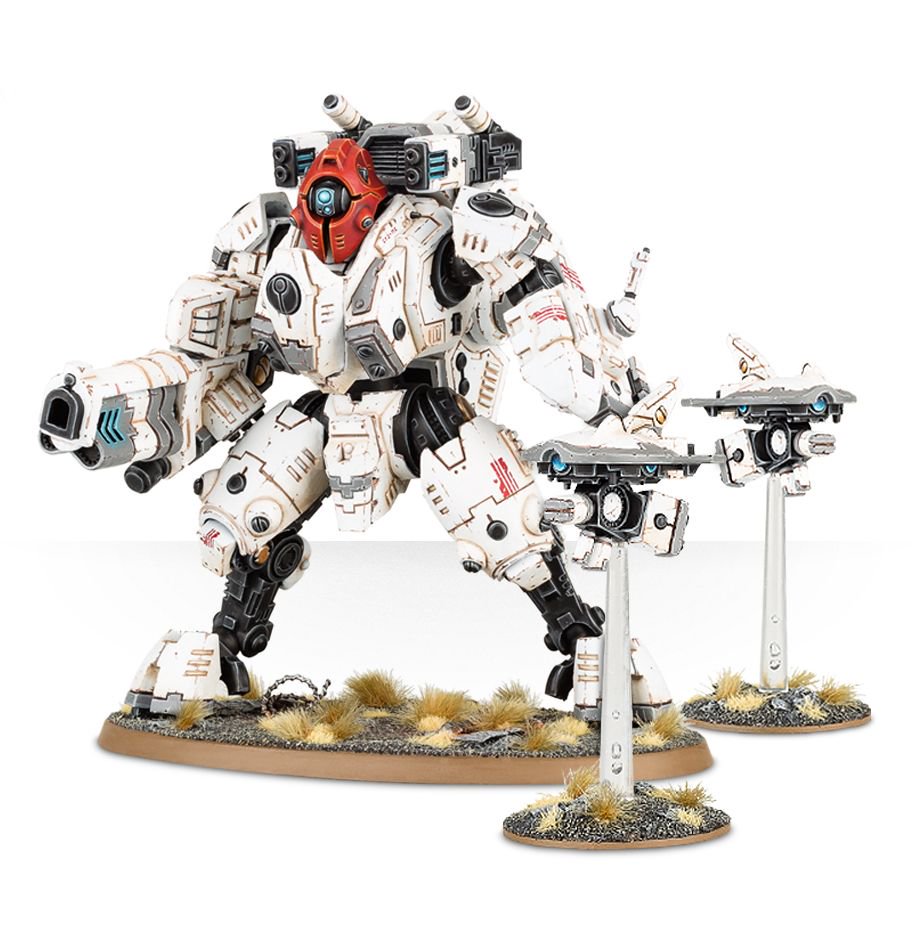 Some finesse is required to keep the Ghostkeel the optimum range from its enemies, which is typically between 18″ and 6″. The Ghostkeel is not made of paper, but it’s no brick house either. It will fold under dedicated focused fire and assault units, or else quickly degrade beyond usefulness. But in order to take advantage of all the Ghostkeel’s armament, a minimum of 18″ distance must be achieved, ideally 9″ if you’re running the Fusionkeel. Even at 18″, that is close enough for many quick units to move and then make a medium/short charge. As a result, knowing exactly what your opponent’s units can and can’t do is vital in order to tread this line of aggression safely.

Another important consideration when running Ghostkeels is how to protect the Stealth Drones. Since they make up half of the Ghostkeel’s resiliency, it’s important to try and protect them as long as possible. Once deployed, the Ghostkeel and Stealth Drones become separate units but should be kept near each other in order to benefit the Ghostkeel. The Stealth Drones don’t need line of sight for anything themselves, so it’s almost always the best option to just keep them tucked away inside of or behind a building – out of sight from your opponent but still within 3″ of a Ghostkeel. This will require that your opponent either shoot at your Ghostkeel with a presumed -2 To-Hit or will require your opponent to designate some of their indirect fire weapons (if they have them) to clear out the -1 To-Hit Stealth Drones. Regardless, this will take the pressure off your other, potentially more efficient units like Riptides, Hammerheads, etc.

A note about the drones, you definitely want to preserve them for as long as possible and a major benefit of taking multiple Ghostkeels is that you’ll get multiple sets of Stealth Drones. Since you can potentially make it very difficult for your opponent to remove a single set of Stealth Drones, having two or three could be nearly impossible for your opponent to remove all at once. As each Ghostkeel, wargear, support systems, and drones are around 150 points (depending on exact weapon and support system choices), taking multiples is an investment that requires consideration. Still,  even two Ghostkeels can be a solid “anvil” to your “hammer” in the right list. And while it may be obvious to some, it’s worth mentioning that you should almost never sacrifice a Stealth Drone via Saviour Protocols. The -1 To-Hit they give is usually worth tanking some damage on the Ghostkeel for.

It’s worth mentioning that Ghostkeels did come down a fair number of points in CA2018 and I think they’re in a better place for it, albeit somewhat of a different role. Previously I advocated taking the Advanced Targeting Systems (-1AP to all weapons for 18 points) to give the Ghostkeel some additional potential, but now I’m not sure it’s advisable. I’m much more liking the idea of a near-barebones Ghostkeel with just an 8 point Shield Generator (4++) with the Cyclic Raker and Flamers. With a cheaper chassis, it’s easier to justify the sole purpose of the Ghostkeel being a major distraction unit and only that. For about 140 points you can get a fairly resilient unit that, against the right army, can really be a headache. My advice would be to concede the notion that it will kill much and rather focus on careful positioning to put it exactly where your opponent doesn’t want it. The flamers would help deter lighter charges which might be used to try and slingshot a melee unit across the board, utilizing a shorter charge on a forward-deployed Ghostkeel. 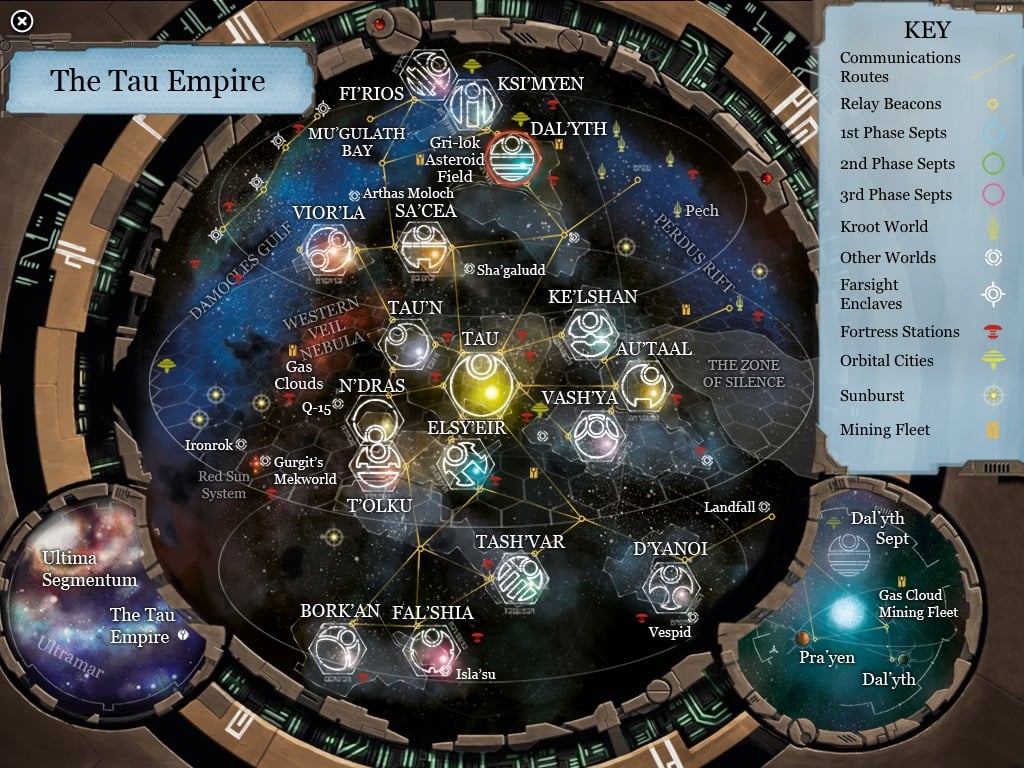 As far as which septs best enhance the abilities and action the Ghostkeel will be engaged in, I lean towards T’au or potentially Dal’yth. The T’au sept just has a lot going for it and being a part of that sept mean it’ll be able to take advantage of things like a T’au sept Commander’s Mont’ka’s, Kauyon’s, Savior Protocols, and Focused Fire stratagem. Plus, since you already know you’ll be within charge distance most of the time, having the improved overwatch is great. The Dal’yth sept gives the Ghostkeel a bit more mobility and resiliency. Normally you’ll struggle to claim a bonus to save from cover for the Ghostkeel since it’s not <Infantry> and is not small. But with Dal’yth sept, you can guarantee you’ll get cover at least the first turn and not have to pay 2CP for Prepared Positions. The Strike and Fade Dal’yth stratagem (2CP, shoot and then move up to 6″) can also help you flirt with danger a bit more aggressively. Also, as a <Battlesuit>, you’d be remiss to forget about all the stratagems the T’au army have related to those: Automated Repair Systems (2CP, heal D3 Wounds), Fail-Safe Detonator (1CP mortal wound chance after being charged), Multi-Spectrum Sensor Suite (1CP, units can’t claim cover saves against one of your <Battlesuit> units), etc. etc.

Psychic Powers like Smite will give the Ghostkeel pause. Does the T’au player place the Ghostkeel or the Stealth Drones nearest? A single powerful Smite could take out both drones and thus the Ghostkeel would lose one of its -1 To-Hit. On the other hand, placing the Ghostkeel nearest would ensure that the Drones survive the Smite (or other similar Mortal Wound generating Psychic power), but with just 10 wounds, the Ghostkeel can’t be tanking a ton of damage from this. As such, Psychers can give you a bad time.

Yes, all T’au units suck in close combat. But the Ghostkeel might end up being the nearest T’au unit to your enemy, so you’ll see firsthand their lack of hand-to-hand combat proficiency. With a T’au standard WS5+, the Ghostkeel will struggle to hit anything at all. Should it get lucky, any decent save at all will most likely stop successful wounds (the S6 is actually not bad). Even if you roll really terribly though, it’s just D1 so it won’t threaten anything significant. Mitigating this is the only rationale for taking the aforementioned flamers, but even still, they aren’t likely to stop a dedicated close combat unit. Poor positioning on the T’au player’s part will just allow you free movement in a turn 1 charge against the Ghostkeel.

Killing the drones, even at -1 To-Hit, isn’t terribly hard since they’re just a single wound at T4, with a Sv4+. The trick is being able to see them or not needing to. Any tournament-going army should have answers to line of sight blocking questions. As such, Stealth Drones should probably be high on your list of things you take out with indirect-firing weapons. A mortar team or two and you won’t need to worry. 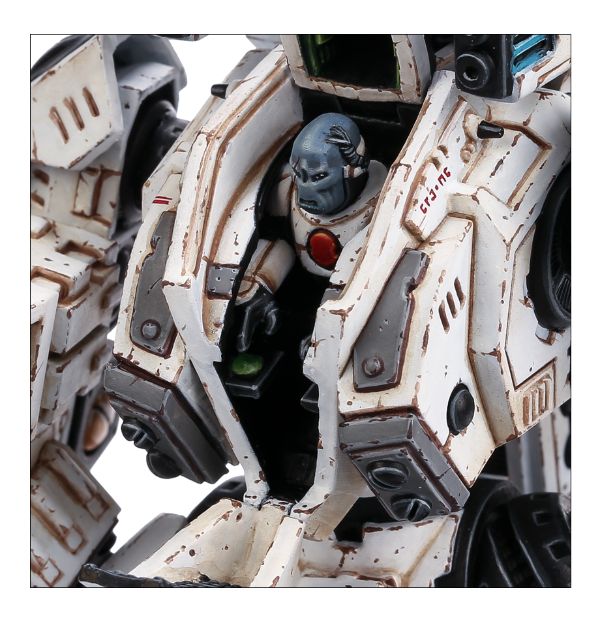 Ghostkeel’s are cool. They are one of three infiltrating units that T’au has and they can demand your opponent play a certain way to account for them. Even though they won’t be bringing down Guilliman single-handed, they can provide value to the right kind of T’au army. With attention to detail, knowledge of your enemy, and the right cast of supporting units, Ghostkeel’s can provide distraction and buy time for the core of your firebase. They won’t win games by themselves though, so knowing that you can isolate and remove them or even just ignore them in some situations and depending on your army.

How often do you use Ghostkeels?