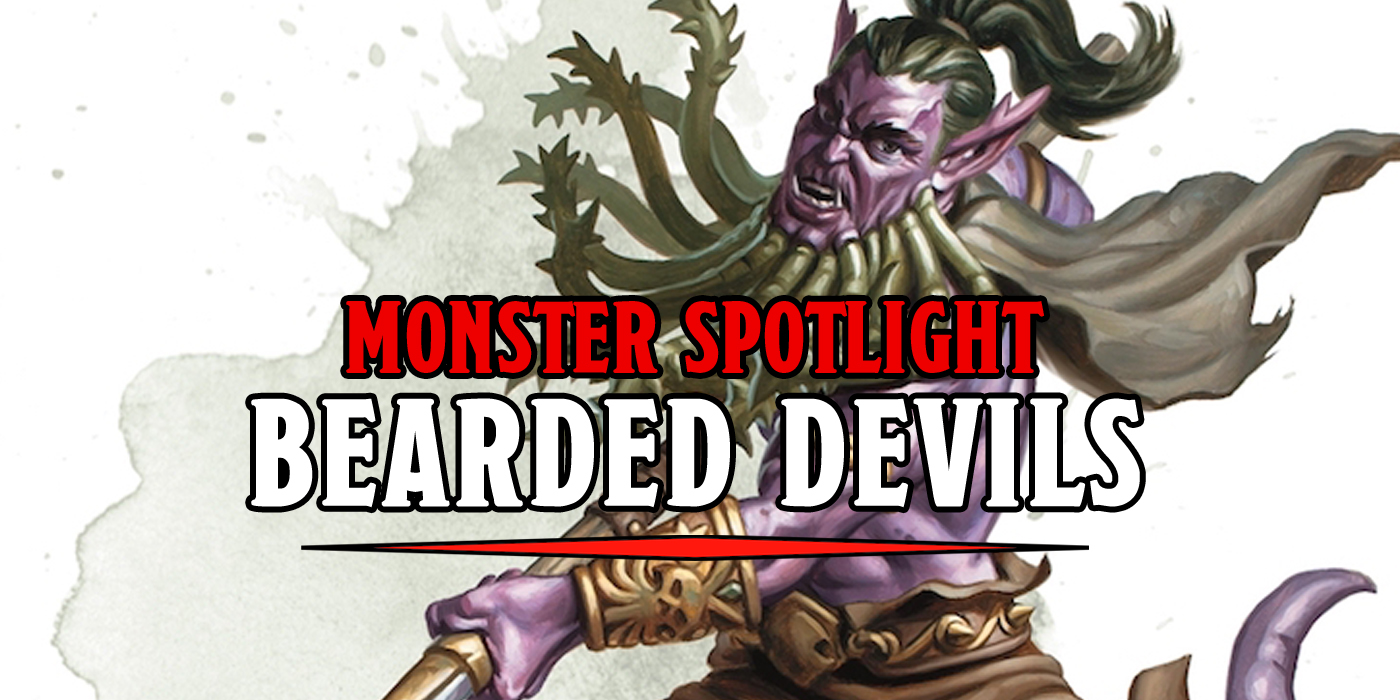 As we dive through the fiendish foes of the Nine Hells, we find out why it’s not just Brian Wilson’s opponents who have to Fear the Beard.

The Lower Planes are a fantastic source for enemies of all stripes, from lowly writhing whelps to realm-shattering gods and demons. But two lower planes in particular have had a… troubled relationship with the press. I’m talking of course about the Abyss and the Nine Hells. These two planes are, collectively, the home to demons and devils–two creatures that were touted very loudly as some of the reasons that Dungeons and Dragons was Satan’s Game. And not in the fun Dr. Demento kind of way.

But rather in the, hey let’s start a massive panic about the game in the media sort of way. In response, for a time, demons and devils were dropped entirely from the terminology of the game. Instead you had tanar’ri and baatezu, and as a result the cosmology took on a life of its own. They had to drift free from the origins of demons and devils and became a little more like the cosmology of a comic book. Now the Nine Hells are getting devilish again and we’re here today to talk about Bearded Devils. 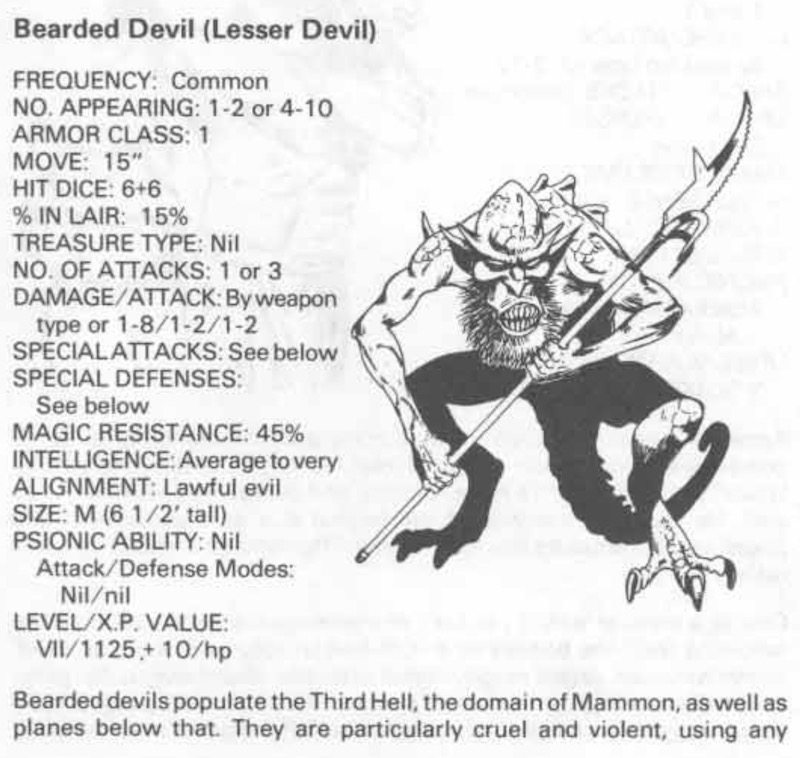 In 1st Edition, these devils are mostly cruel, violent sadists who delight in looking for any excuse to cause mayhem–which makes them rather demonic if you stop and think about where D&D places the Devils on the Law vs. Chaos spectrum. But Even in 1st Edition, the Bearded Devils are starting to fall into their role as fiendish shock troops. And it’s not hard to see why. These foes are resilient, with 6 hit dice and a suite of fiendish defenses.

This is also one of the earliest examples of a special attack in D&D–they wield glaives that they can use to catch opponents. In this edition it’s represented as damage dealt and they are held fast unless they can successfully make an Open Door check (1st Edition term here, don’t worry about it).

When not attacking they’d use their beards, described as wire-like, to attack as well as hands, leading to one of the greatest sentences in all of D&D:

If both hand attacks succeed, beard damage is maximum.

They also have a suite of spell-like powers that let them command the horrific flames of hell, as most devils did. 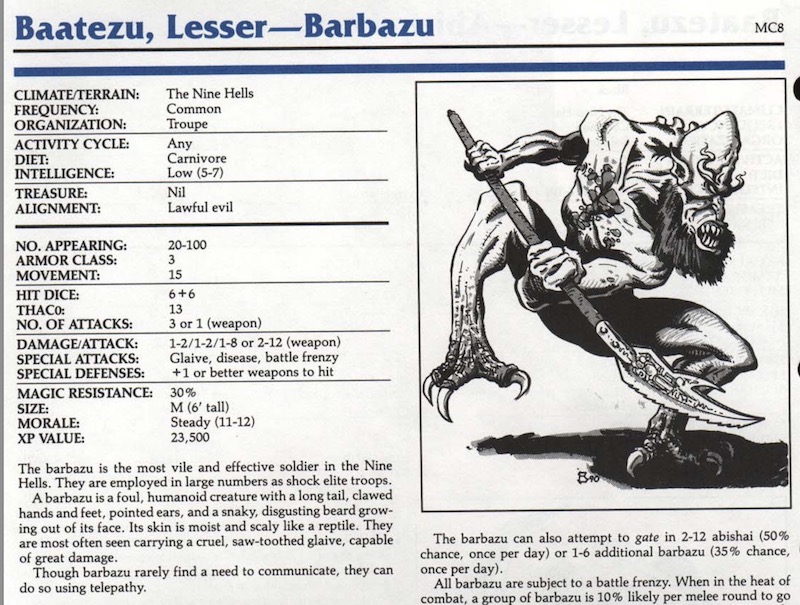 2nd Edition Bearded Devils became Barbazu. And they got a promotion (as well as a weird head situation). Now they are the most vile and effective soldiers in the Nine Hells. 2nd Edition is where the Blood War came to be one of the central conflicts of D&D, spurred on by Planescape and other cosmic campaign settings of the day. They gain telepathy instead of speech, and as you can see, they are still prone to demonic-like feats of destruction.

Not only do their glaives do more damage, reflecting their deadly new emphasis on being shock troops–but they also deal bleeding damage that continues round to round until the target bleeds out or is actively healed. The other thing worth mentioning is the Barbazu’s battle frenzy, which can send them into a berserk rage where they attack twice as many times and get +2 to hit and damage, which makes them even deadlier up close and personal.

Gone are the tormentors and hellfire devils that could also fight, the new supersoldier is here to stay instead. That’s how Barbazu would remain in 3rd Edition, where they went back to being Bearded Devils and lost any unique artwork. They do, however, gain a significant boost to their resilience, gaining all the usual resistances for being a devil/Outsider in D&D 3.x.

A few other changes worked their way into the new Bearded Devil–the beard now carries a devilish disease (devil chills) that deals strength damage; and on top of that they can also work themselves up into a battle frenzy which no longer doubles their attacks–but it does give them extra hit points and strength. You can see the Barbarian’s Rage mechanic at work here. 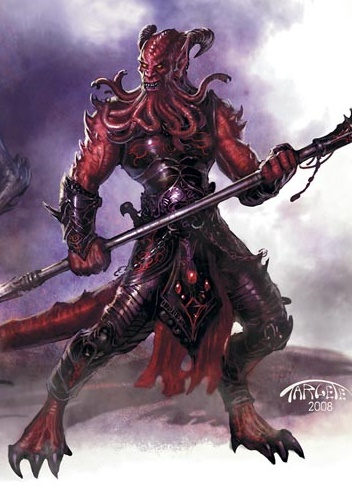 4th Edition has the most traditionally devilish artwork. The Bearded Devils are guards and assault troops, and you can see the refinements of 4th Edition hard at work here. Not only is it a stout brawler, weighing in with 129 hit points, it’s also got a powerful glaive that deals ongoing damage, it works well with its friends thanks to its devililsh teamwork, and its battle frenzy is a passive ability that triggers when bloodied.

These qualities make the Bearded Devils excellent minions that a cult would be summoning. You could easily see this one breaking free and wreaking havoc for a while if a cult tried–and failed–to summon one. 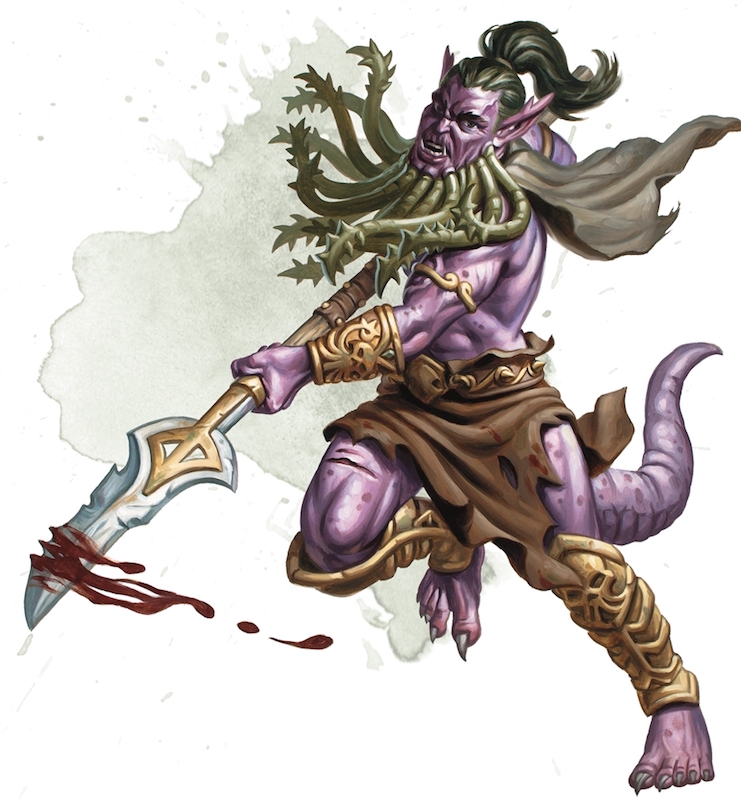 Finally 5th Edition’s Bearded Devils strike a great balance of what you’ve seen so far. The bearded devils have become the most destructive and straight up fight-y of the devils, and these ones are still there for it. With abilities like Devil’s Sight and Steadfast, they work well grouped up with other shock troops. And, after 4 editions, they no longer need to even use their claws to attack with their beard. The beard is a weapon, which is what we’ve been saying from the get go.

And it’s a good weapon that poisons targets and prevents them from regaining hit points as well as doing damage. While their Glaive deals horrific, bleeding wounds to those it attacks.

So if you’re looking for a fearsome fight that can put the hurt on even parties above its CR, bearded devils are a great option. They have just enough resistances to keep them in a fight, and will serve you well any time you need brawlers to put the pressure on in an encounter. 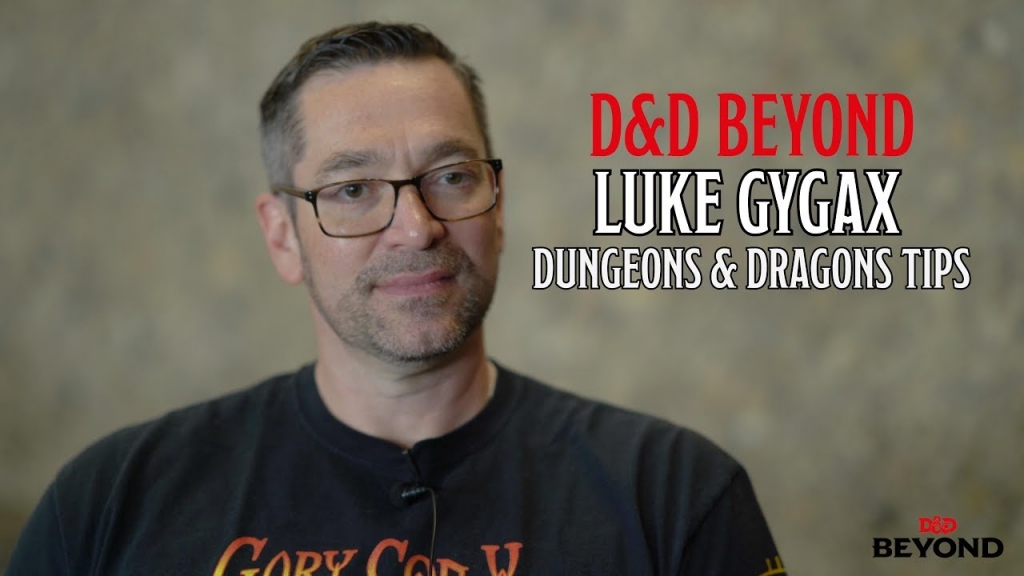