RPG: History of the Khargra – The Most Underground Monster Ever 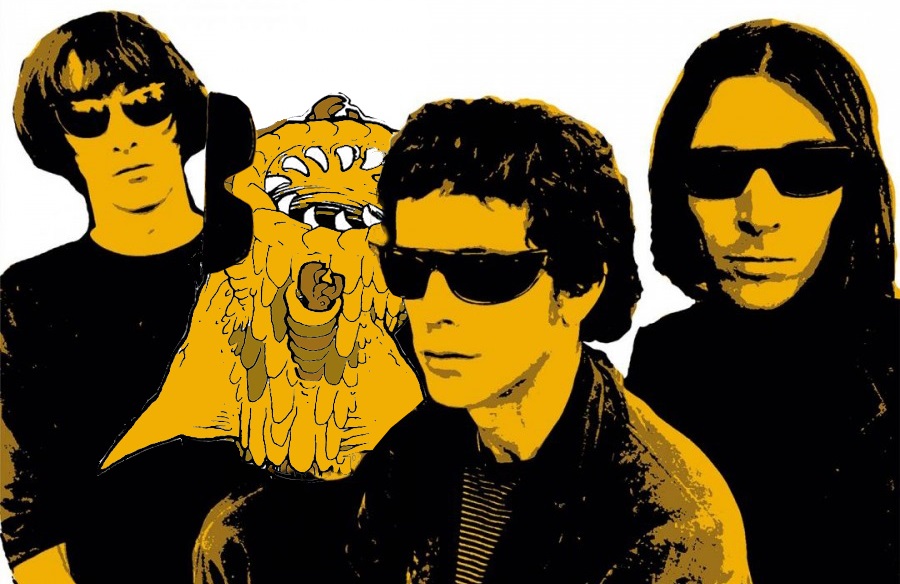 Today we’re bringing you a monster that’s an underground hit.

What does it mean to be truly Underground? I mean, sure, you can have a few hit albums that are outside the mainstream–but after how many do you become mainstream yourself? Although maybe, as some say, Underground is just a shared set of values, like letting your music speak for itself, rather than relying on marketing and producers to polish everything to that same glossy-pre-warpped marketing sheen that coats every top 40 station from coast to coast.

Or maybe, being Underground is all about being free of corporate censorship–straying from the constraints of the label in pursuit of artistic freedom and truth. Or maybe it’s all about the DIY aesthetic where you do guerrilla shows and indie labels. This week’s Monster hews to its own definition of Underground.

Being literally under the ground.

It’s transformative, but then so is everything done by the Khargra. Sure, the Khargra didn’t sell many modules, but everyone who bought one went out and started a module of their own. So let’s go beneath the earth for one of the most underground monsters you’ve never heard of. The Khargra. 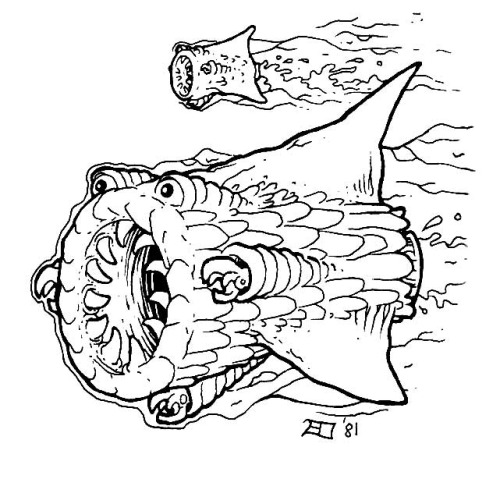 Tucked away in the pages of the First Edition Fiend Folio, nestled beween Kenku and Killmoulis, you’ll find the first known appearance of the Khargra. Back in ’81, when nobody really understood what this thing they were making would become. When it was all about being free and making monsters without worrying about selling albums. The scene was still fairly fresh, and that’s where the Khargra makes its entrance. 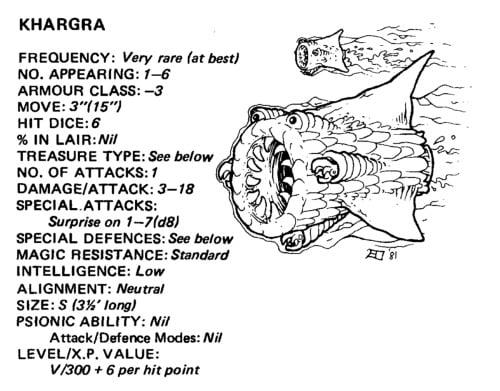 In addition to being incredibly rare, the Khargra were outsiders. Literally. In that they’re native to the Elemental Plane of Earth. There, in their natural scene, they’d ‘swim’ along the layers of rock in small groups, like schools of fish riding a tide of shifting tectonic plates and continental drifts. They move to the rhythm of the earth and shifting geological strata, feasting on the plankton of ore and lode.

But the Khargra is a refined monster–or at least a refining monster, they’d grind up unrefined metal and then refine it as part of their digestive activity. And because this was back in the day when you could read about a monster’s digestive tract in their monster entry, we also know that they create ‘pebbles’ of unrefined waste material that also hangs out in their system, and you can discover a slain Khargra’s most recent meal when you cut it open (which, if you’ve slain one you’ll want to do, because they also refine the ore into valuable metal). We also know they prefer refined metal, and are particularly fond of eating metal and armor–which they’ll grab by leaping through the floor or ceiling of a cavern in search of their tasty treats.

Unfortunately these treats are almost always being worn by some living thing that doesn’t want them to get eaten–and so the Khargra will fight back, more annoyed than anything. As you can tell by their maws up there, they’ll stop at nothing to get their meals–and were capable of delivering a powerful 3d6 bite attack, or even swallowing a metallic weapon whole when attacked.

But the Khargra is more than just a gaping, grinding maw. Note the three arms that look practically spring-loaded. The Khargra uses them to devastating effect, hitting as though a 12HD creature, and once it’s grappled a creature, they will hang on until either they die, or they eat the metal they’re after.

Curiously, there are a few key weaknesses to the Khargra. You could cast a phase door spell as they dive back into the rock and instantly kill it, keeping it from reintegrating with its native earth and stone. Transmute Metal to Wood will also kill a Khargra. But it’s good that these weaknesses were built in, because otherwise, they are immune to fire and cold damage, except for Heat Metal. Move Earth stuns a Khargra, and Lightning hits them for max damage always. I have to say, I like this mechanic a lot–I know that you don’t really see too many monsters with particular effects to a given spell (and I understand why) because it slows down combat.

But that’s something to consider when designing your own monsters–are there weird things that have bizarre, specific interactions with a given spell?

After 1st Edition, the Khargra disappears from the public eye for a while. Going back underground, if you will. It isn’t seen again until the Planescape Campaign Setting debuts.

At that point, swimming back onto the scene is a Khargra that’s been through some changes. No longer are they the goofy maw monster–they’re much more fishlike. They have that Planescape Aesthetic–and while I like it, it’s still nothing compared to the original Khargra.

As you might expect, the Khargra has reworked itself for Planescape, and it shows. Its sophomore effort really shows a mastery of the form, with changes like imposing a -5 penalty on surprise rolls or the expansion of its metal weapon swallowing ability to include any metal piece of equipment on a roll of 16. Similarly its arms are now used like grappling hooks–it launches them at its poor sod of a victim and then drags them towards its gaping maw, where, again a 3d6 bite awaits those who cannot bend bars or lift gates and escape its terrible grip. 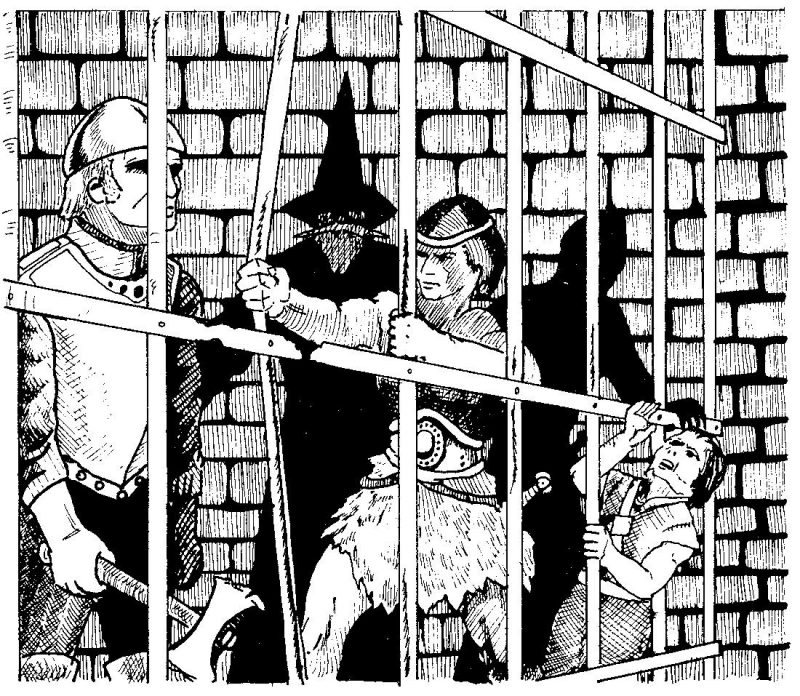 As before, it still retains all the weaknesses and immunities to spells–but then, once all the combat information is done. The Khargra follows up with a habitat/ecology B-side that is transformational. We learn that the Khargra hatch from eggs, mature on the Plane of Earth, and then eventually travel to the quasiplane of Mineral, where after that, their fate passes into mystery. Some say they are slowly transferring all of the ore from the plane of Earth to mineral. Others say they die from overeating. Still others say that Khargra are larval Xorn and Xaren, though that also seems unlikely. 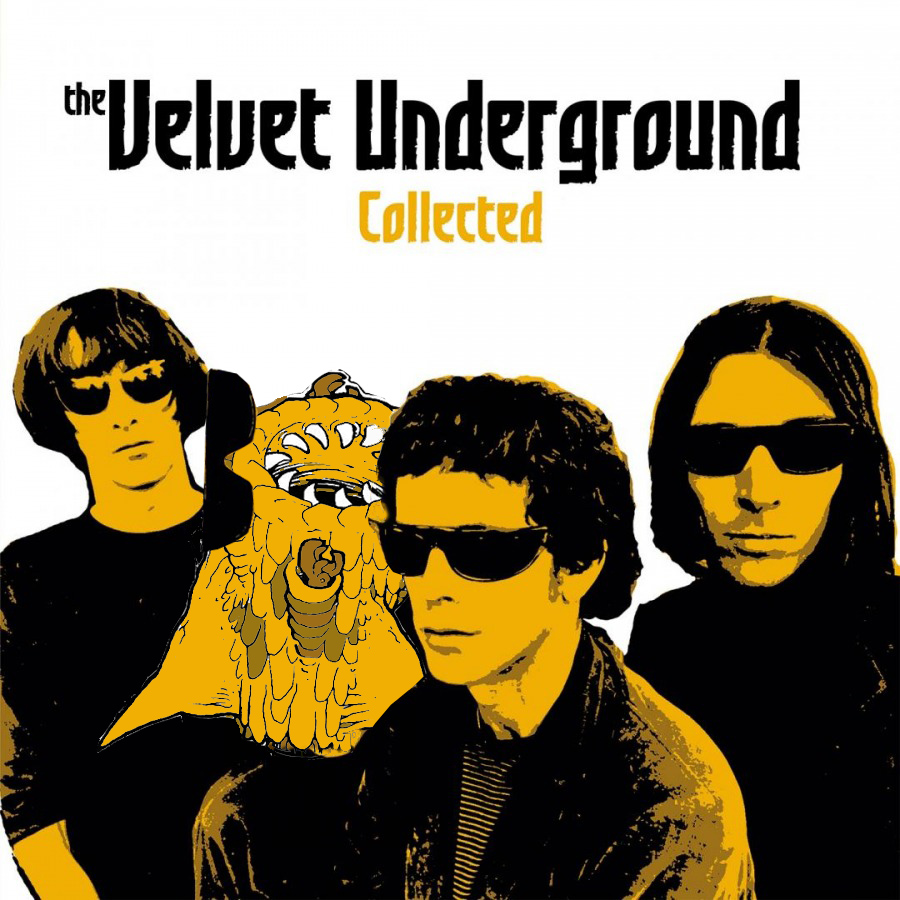 And after that–the Khargra again disappears from the public eye. Sure, there’s a smattering of fan-tributes and rumors, even a Pathfinder appearance. But the Khargra was and remains one of the greatest Underground Monsters of our age.

What do you mean what genre? Rock, obviously.