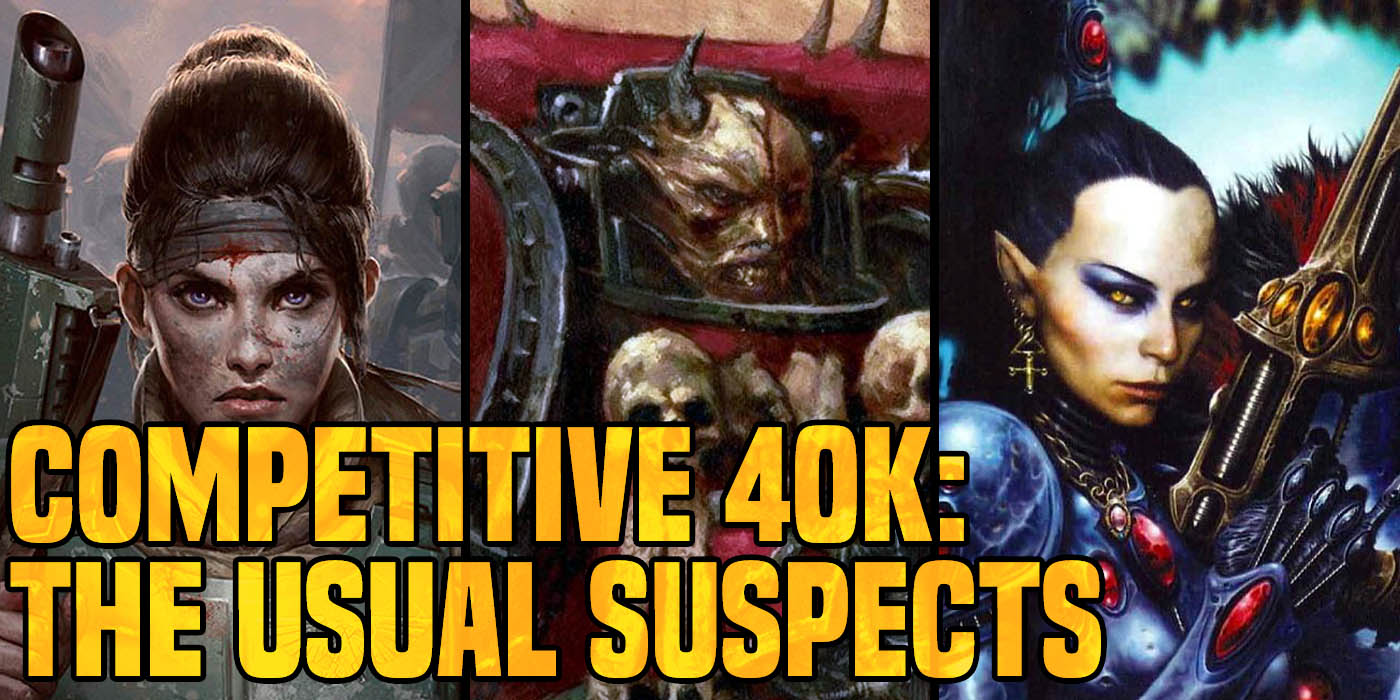 Hey everyone! Adam here, from TFG Radio, here to start a new series of articles about the competitive side of 40K. Today we are going to break down what armies a player should expect to see out there in the current 40K meta.

Welcome everyone to a new series about competitive 40K. The idea behind this series is to give you, the reader, a look into the competitive scene. I hope to be able to inform and shed some light on some the tips and tricks that you see in list building, and on the table top. I most likely won’t go into specific details about events, tournaments and such, but give you more of a general overview about this side of the hobby so that you are prepared for when you do enter your first tournament, or you have a friend that may bring something similar to your casual games (I won’t use the term “friendly” games because, as we all know from sports, friendlies are rarely friendly).

For a bit of background, I have been playing 40K since the Rogue Trader, on and off in the early days, up to this current edition. I’ve have been playing in 40K tournaments since 3rd edition, with the first Los Angeles Grand Tournament as my first one.  I am one of the judges for the Las Vegas Open, and have been since it’s third year(I played in the first two). I still play in tournaments but have been judging more and more events lately. I also play other sci-fi/fantasy games, as we as historical games. All that being said, I think we will start with something simple: Three armies you will most likely see at a tournament. 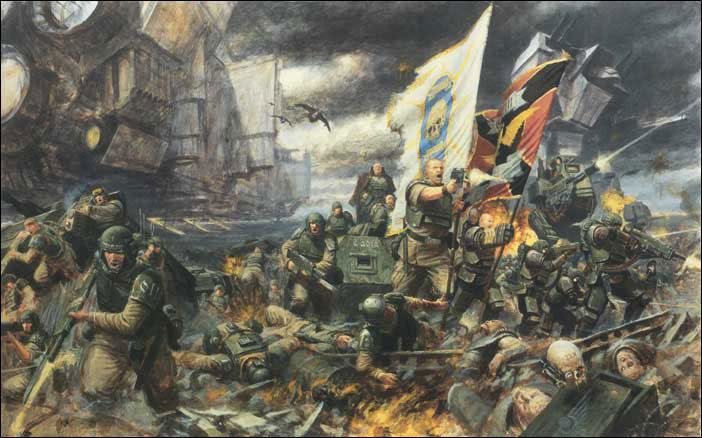 You’ll notice that I didn’t say a specific codex. The reason for that is simple. The bastion of humanity give an Imperial player a lot of options. Space Marines, Imperial Knights, Astra Militarum,  an Imperial player has a choice of what they want to use that will suit their play style. What you are likely to see, however, more than anything else, are the Astra Militarum. As in the fluff, they provide the backbone (*cough Command Points*cough*) to almost every other army. They also do well on their own. Whether by themselves or allied with some of the big boys, don’t be surprised to see Bullgryn, Wyverns, and lots of mortars. Cheap bodies, combined with resilient and hard hitting units from their own or other codexes, make an Imperium army a force to be reckoned with. 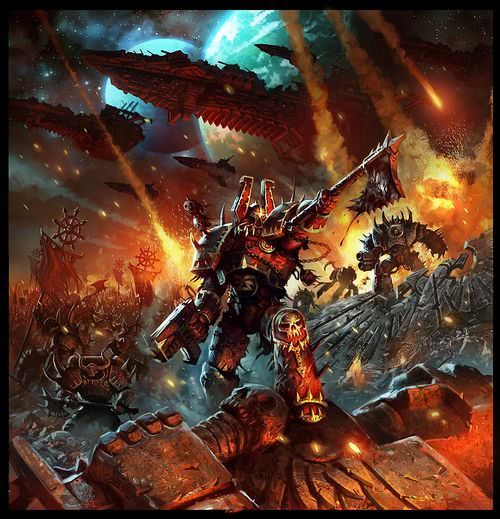 Just behind, or in front depending on who you ask, is the Pantheon of Chaos. Daemons, Heretic Astartes, Chaos Knights, the servants of the Dark Gods also have a plethora of choices. With the addition of Chaos Knights, the Chaos player is given a  lot more shooting options to add to their already deadly close combat units. Lords Discordants, Daemon Princes, Tzaangors, and Chain Lords are units you will most likely see on the tabletop across from you. Having a model that can generate almost 60 attacks by itself (that’s for another article), the capabilities of  ruinous powers on the tabletop sometimes seems unstoppable. 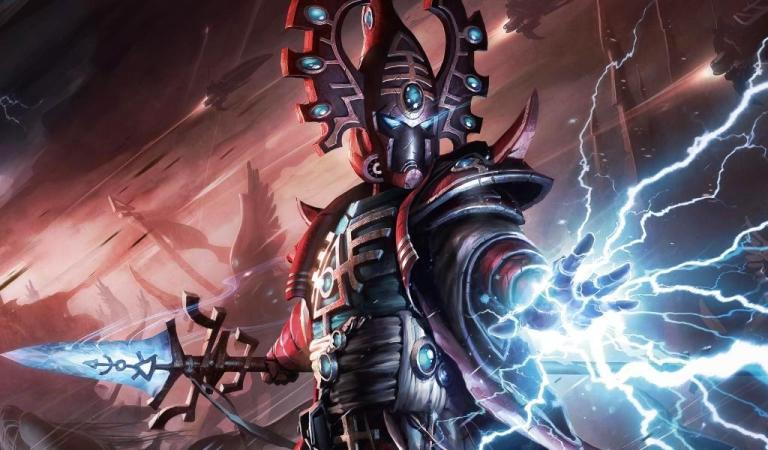 The last army you will most likely see are the Aeldari. This is the combined faction of the 4 different Aeldari codexes. Even with the recent rules adjustment by Games Workshop, the army is still able to perform at a high level. Although they may not be winning large tournaments, they are still a force that needs to be dealt with if you plan on going to an event. The current boogieman is the 5-7 flyer list that combines Craftworld fliers with Drukhari flyers. Add some wave serpents to the mix and you have a very fast and resilient army to deal with. I’d be surprised if you saw a craftworld flier that isn’t from Alaitoc craftworld. Being able to combine minuses to hit, a stratagem that can stop your stratagem, a vehicle that reduces damage by 1 and fairly reliable psychic powers combine to make most armies fast and hard hitting. 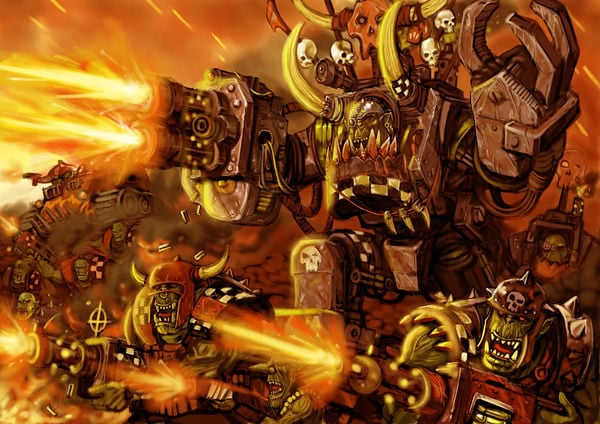 Those are only 3 of the armies you could encounter. There are many more that you may see but are not as numerous, so you may not even play against the army. Two armies that you may not see, or play against, but do need to watch out for are Genestealer Cult and Orks. The Cult Ambush ability, along with a stratagem similar to “Agents of Vect”, make Genestealer Cult a very “glasshammer” type army and one that can catch people by surprise if they aren’t careful or they don’t know what they are capable of. Orks, on the other hand, are a very resilient army. They can have a ton of tough bodies, can either grind you down or even kill you with shooting. Just the effect of the Shokk Attack Gun alone can leave their opponent with nightmares after the game.

~ Well, that’s all for now. How does this line up with what you are seeing in your local competitive scene?