The next Mythos Pack in the Dream-Eaters Cycle has been announced – it’s “A Thousand Shapes of Horror” and we’re looking at some previews.

Arkham Horror: The Card Game is back with a brand new Mythos Cycle and the second Mythos Pack is coming with some new cards and a new scenario to play through. Are you ready to delve into the mysteries of the Dreamlands? Well first you’re going to have to check a (possibly) haunted house…

Even in places where the Dreamlands borders the waking world, one cannot simply walk between them, and no ordinary key will do. A sense of fantasy, a special spark of imagination would grant you passage, but tragically these things are often lost to time along with other wonders of youth as more practical concerns take hold. For your guide, theirs was lost after a brush with death at the hands of an ineffable creature at an abandoned house in the Merchant District.

The house itself is not much to look at— a run-down seventeenth-century building that has been abandoned for decades and fallen into disrepair. Its door is scratched, the windowpanes are shattered, and rats crawl around the foundations. You’re not sure exactly what you should be looking for, but you have to start somewhere. With no other choice before you, you take a deep breath and step inside. 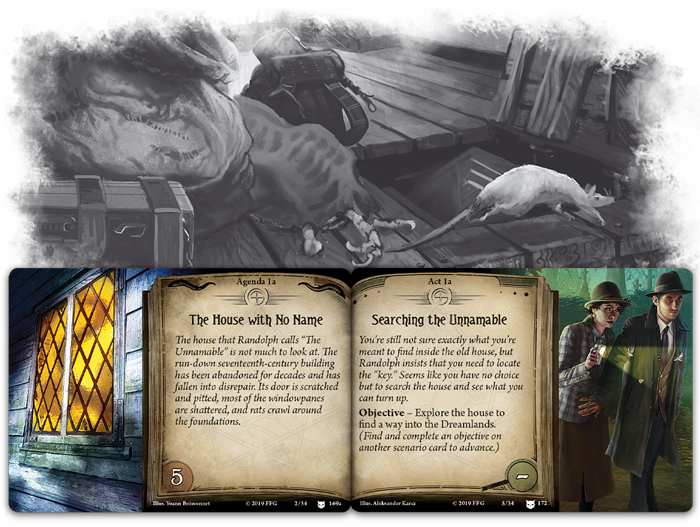 You’re looking for something – you’re not quite sure what, but you have a feeling you’ll know exactly what it is when you find it. That said, this Mythos Pack may have some surprises for you – but it’s also got some great new cards to add to your Investigator’s deck. 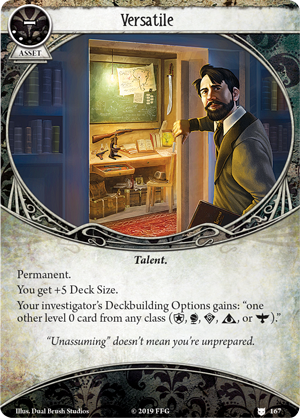 Right off the bat, Versatile is a card I’m very much looking forward to including in my builds. Having a +5 deck size is very nice and opens up some additional combos and options for ALL players. Additionally, you can include one other 0 level card from any class. This can pair up very nicely with just about every investigator as there is always “that one card” you wish you could run…and now you can. 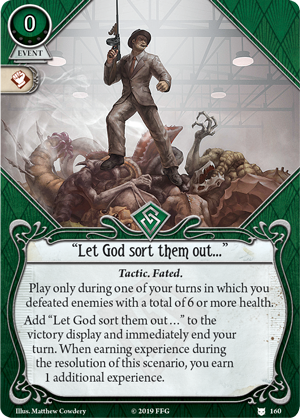 “Let God sort them out…” is kind of a strange card to include in the Rogue deck. But then again, I’ve played some pretty effective “Combat Rogues” in my day and could easily see some of those builds taking out 6 health worth of monsters in a single turn. This card also slots in perfectly with Versatile if you’re not a Rogue and want to fit this card in your deck. Like if you’re a Guardian that can’t take Rogue cards. And if you ARE playing a Guardian who can use Rogue cards, I feel like this is a strong choice early on for some XP gains. 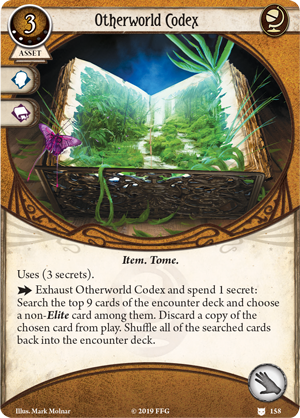 Otherworldly codex is 3 resources and 2 XP, but holy cow is the ability worth it. This is a rare card with the ability to directly manipulate the Encounter Deck which is HUGE. If you know there is a check in the Encounter Deck or perhaps a monster you don’t want to deal with (as long as it’s non-Elite) you can simply discard it. Not too shabby! 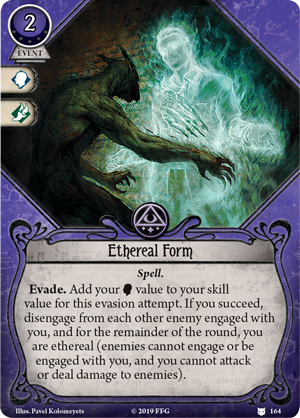 And finally, we have Ethereal Form from the previews. This is a pretty potent spell for getting out of combats – and basically making you immune from enemy attacks for a round. Just have to pass the check once and *poof* you’re now in your Ethereal Form.

There is more in this Mythos Pack, but we’ll have to wait until it ships to find out. 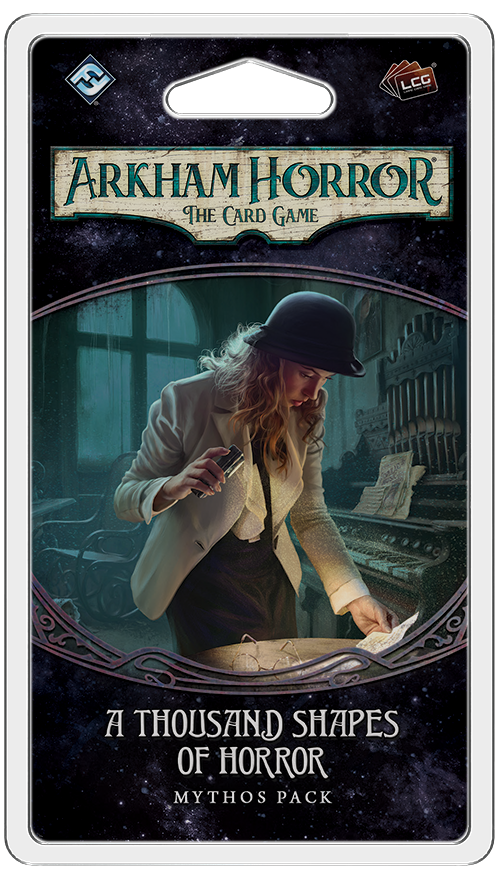 Delve into the secrets of The House with No Name in A Thousand Shapes of Horror, the second Mythos Pack in The Dream-Eaters cycle for Arkham Horror: The Card Game! After half of your team has seemingly become trapped in the Dreamlands, you decide to force your way into the realm in your physical body instead of traveling there in your sleep. This method comes with plenty of dangers, but it will hopefully prevent you from becoming trapped yourself. But if you wish to enter the Dreamlands, you must first find a key.

A Thousand Shapes of Horror is Scenario 2–B of “The Web of Dreams” campaign. This scenario can be played on its own in Standalone Mode or combined with the other expansions in The Dream-Eaters cycle to form either a larger four-part or eight-part campaign. Inspired by H. P. Lovecraft’s classic short story “The Unnamable,” this adventure takes you to the most haunted corners of Arkham, where the veil between realm is drawn thin and even the most rational mind may be forced to confront the possibility of a world beyond the one we know. Do you have the composure to hold onto your sanity and save your friends, or will ineffable terrors tear your mind apart?

How will you enter the Dreamlands…