RPG: Consent In Gaming Has Everyone Talking 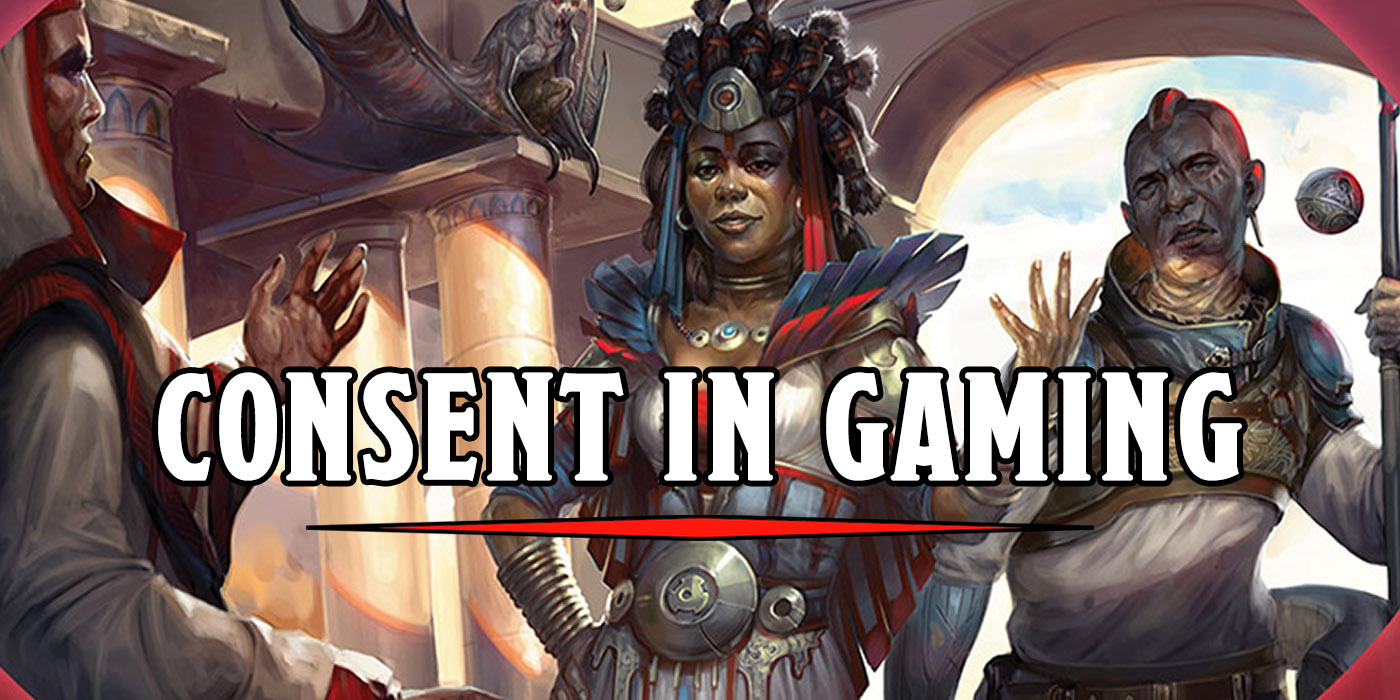 A recently released supplement, Consent in Gaming, from Monte Cook games outlines a number of safety tools and some guidelines for discussing… consent. In gaming. It’s a free, 13-page .pdf full of all kinds of helpful information and suggestions for how to navigate sensitive subjects. But what exactly does that mean? What do you consent to in a game, anyway?

Well, I’m glad you asked. Consent here is talking about the kinds of content you want to crop up in your game. This can be everything from the traditional thing that springs to mind when you talk about consent, like scenes of love and intimacy and sex–which gamers have dealt with throughout the years to varying degrees of success–to other mature or sensitive content that might make players uncomfortable or evoke feelings of panic, bringing up trauma, or even just putting a damper on the fun. Things like spiders, or harm coming to children, or elements of body horror like gore and eyeballs.

You don’t want to see what the inside of this thing looks like, trust us…

There’s a checklist at the back of the book that outlines a list of topics, but it’s only a jumping-off point. In fact, the whole PDF points out, if you bother to read it, that these tools aren’t a catchall–but that they’re there to start an important conversation, and one which not everyone may be aware they can even have in the first place.

Naturally, people on the internet are jumping at the chance to prove that their reading comprehension is as poor as their empathy. Go to any comment section about this subject, including this one, and you’ll find people telling you some form of:

Nevermind the excessive irony that comes from complaining about how sensitive people are because you saw a JPEG of a PDF that you probably weren’t going to use anyway. But there are people out there that see a chart like this: 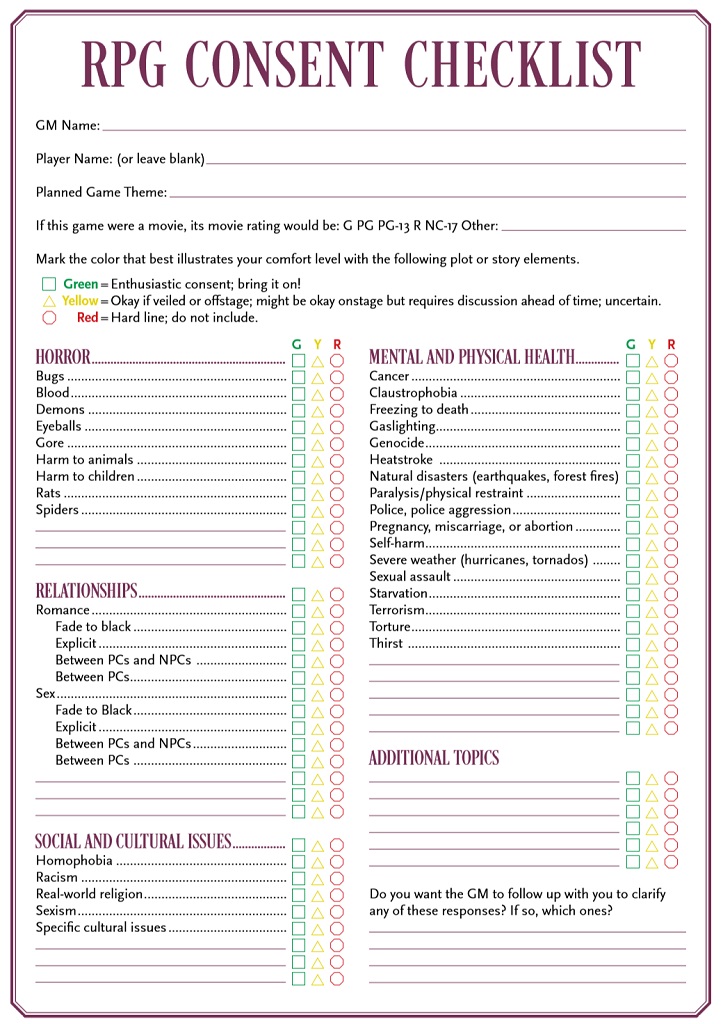 …and think it’s either a list of demands that the GM must accommodate or somehow align, or that it’s going to somehow ruin their carefully crafted story. Nevermind that the very nature of playing a roleplaying game is an exercise in collaborative storytelling that means “your story” is an accessory, at best, to facilitate the story that you all collectively tell–but that’s another article. But people are seeing this and they’ll balk, or talk about how it’s ruining gaming.

And I understand why. This is far from an exhaustive list, but it is broad enough to catch a few things I hadn’t even talked about. I’ve definitely run games with demons and bugs and demon bugs and bugs that flirt with and start romances with PCs… look, it was the 90s, is all I’ll say about that… but nobody wants to feel like they’re a monster. Nobody wants to feel like they’re either wrong now, or have somehow been wrong in the past about how their table runs. 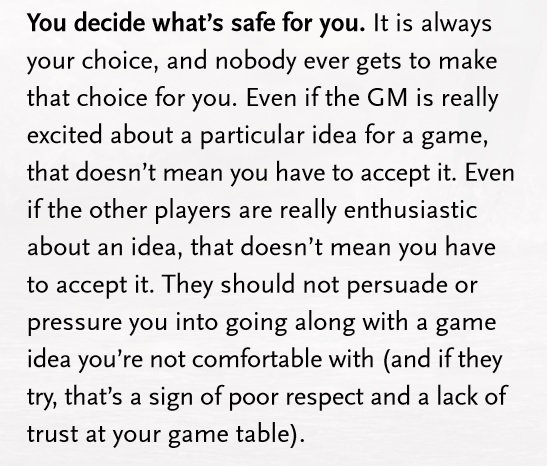 Surely you’d notice if someone was uncomfortable, right? Why then, would you need this now, when you’ve been talking with your friends for decades? But then you’d be taking the wrong message away from this. This sheet, these tools, aren’t there to point out what you’re doing wrong–but rather to help everyone get it right.

It all comes down to trust. If someone hands you a checklist like this–and real briefly let’s acknowledge that it can be extremely difficult to talk about your boundaries. Admitting that something makes you uncomfortable is scary in and of itself; it feels a lot like exposing a weakness. I mean it’s right there in the word: vulnerability. You’re opening yourself up, being vulnerable, showing someone that you consider a friend where you are either hurt or scared and hoping that they won’t ridicule you for it.

Even if it’s just good natured ribbing–or worse, say you were afraid of spiders (for whatever reason) and the GM, knowing this, goes out of their way to bring it up at every turn. You’d have been better off not saying anything in the first place. Now your vulnerability is being exploited–so yeah, it can be hard to even bring this up in the first place, and this checklist is a great, explanation-free way to indicate your preferences. 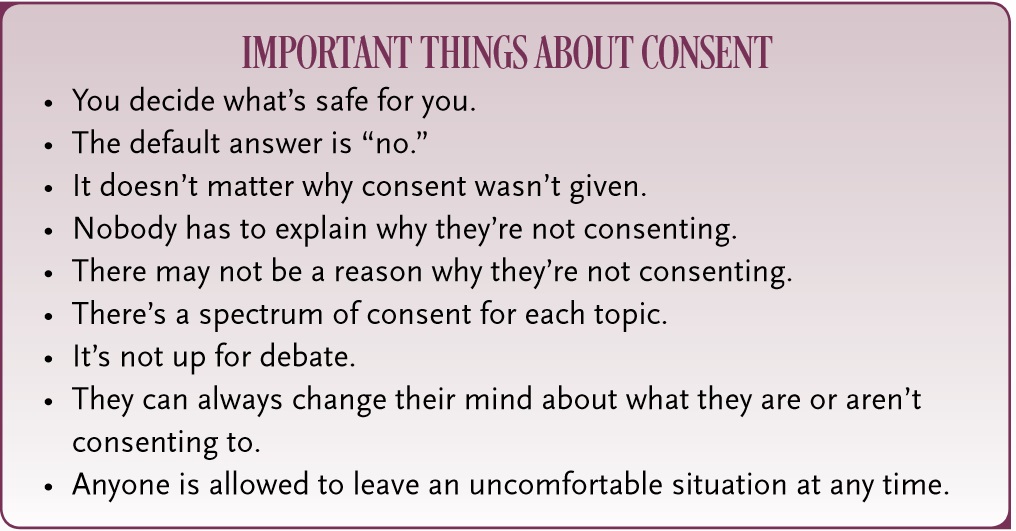 And when someone hands you something like this, it’s a gift. They’re saying “I trust you enough to listen to my needs.” That takes guts, and that means you can go deeper. Contrary to how restrictive a list like this might initially feel, it’s surprisingly freeing.

In my other life, I do improv theatre–there’s a lot of overlap with roleplaying games, for certain–and my partner teaches a workshop on consent and intimacy. In these workshops, she’ll often talk about touch. Touch is a very basic human thing–and yet it too can be fraught. Especially if you’re onstage, doing something unscripted. If you don’t know if the other person is okay with being touched, you might shy away from it–I feel like most of us will–but there are a few out there who will blunder forward thinking everything’s fine.

Either way, you’re cutting off the opportunity to explore the scene deeper because you either don’t know or aren’t aware of what the boundaries are. But once they’re set–sure, touch my shoulder, put an arm around me, but don’t touch my face–you know what you can and can’t do. And that means you can much more confidently wade into the “what you can do” territory. I’ve watched this workshop a dozen times, and I can tell you, every single time the scenes got better. The players played with more confidence.

It’s the same in roleplaying games. Once you know where the lines are, you might be surprised at what you can play with. You might find out that players want romance, or more gore, and you can safely pump the gas in a direction that makes everyone happy. You’ll be able to play your games more comfortably–and as a result, you’ll have better quests, better scenes, better adventures and more fun. 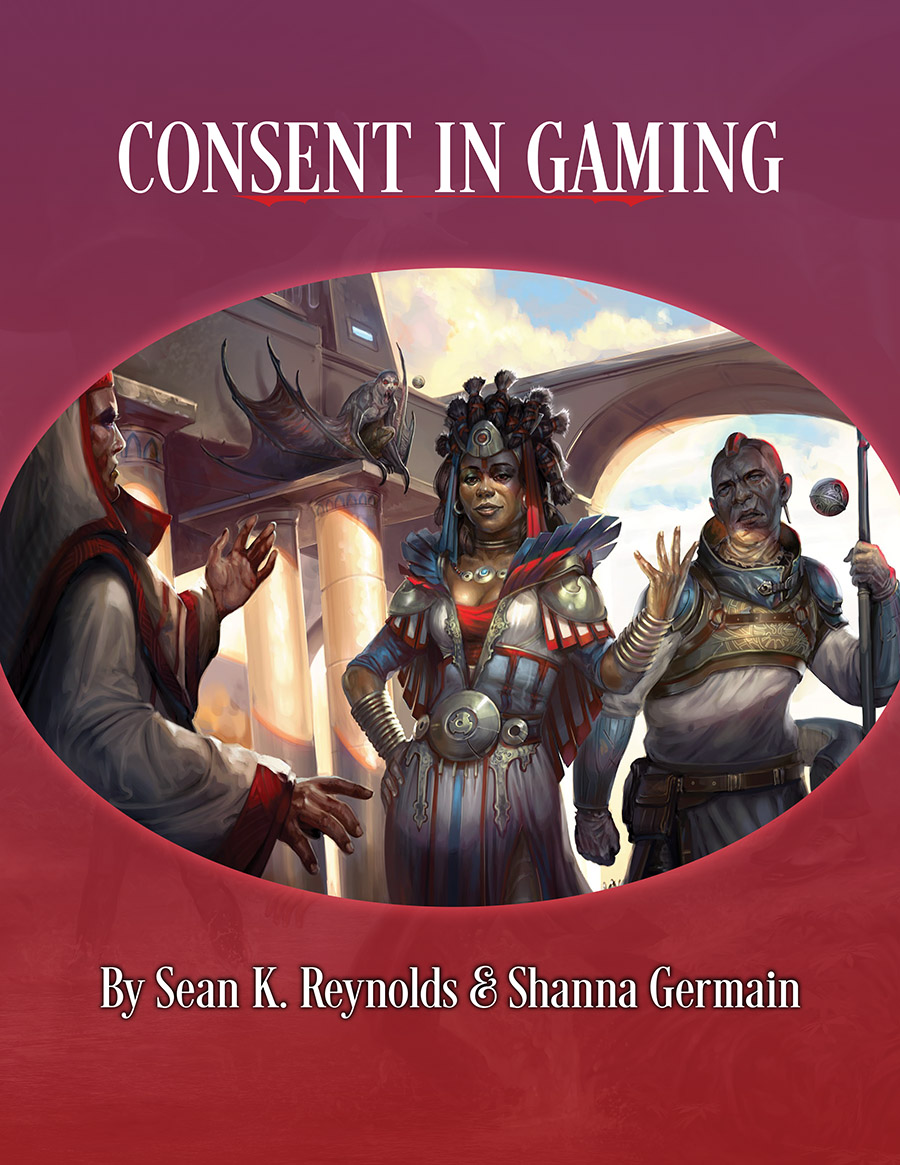 All that to say, this isn’t something that you can just pick up and get right the first time. Maybe you’ve had some form of these conversations, but this is just a toolset to help you get it right, and also to help you get it wrong. People who have issues might never have practiced setting boundaries…and this is a great place to start. There’s a great section that talks on recovering from a mistake, which feels very important in 2019–rather than doubling down, you can just apologize and move on without even a bump in the road. Or you can find ways to check in, while the game is in progress, without breaking the momentum of your game.

It might feel clunky at first, but the more you practice, the better you’ll get. These tools are all about increasing empathy, and at the end of the day, that’s what gives us the best games. These are stories we tell, and adventures we share together. So be aware of your feelings, become aware of the feelings of the others at your table, and get out there and game with the best of them.