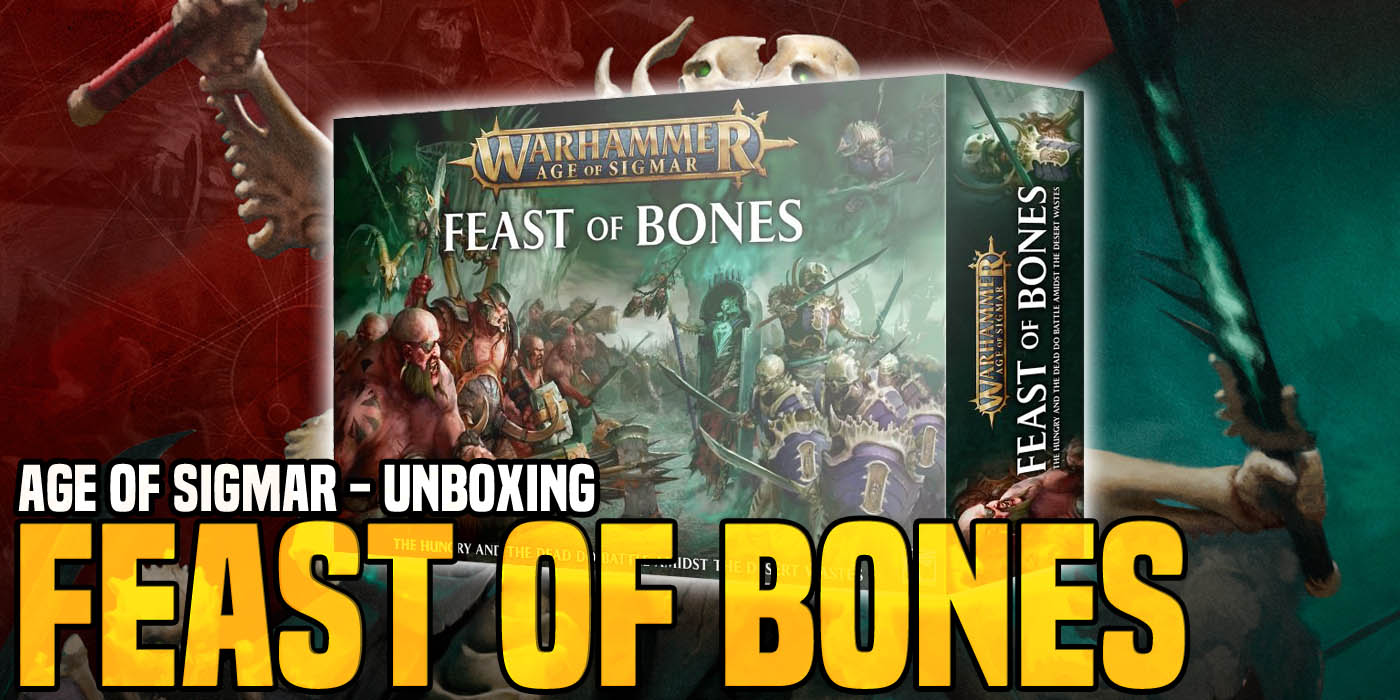 The new Games Workshop Battle Box is up for Pre-Order this weekend and we’re diving into the contents! It’s the Bonereapers vs Mawtribe Ogors!

A brand new army is coming to Age of Sigmar with the Ossiarch Bonereapers. We’re taking our first look inside the box and we’re pretty excited with what we’ve got!

When GW first announced the Ossiarch Bonereapers I was all-in. If you’ve been keeping up with these releases, you probably know that I’m going to be playing this particular army. Opening the box, I also learned a few things after the video. While we do go over the stats of all the units one of the things I learned late last night was that the Mortek Guard are on 25mm bases. 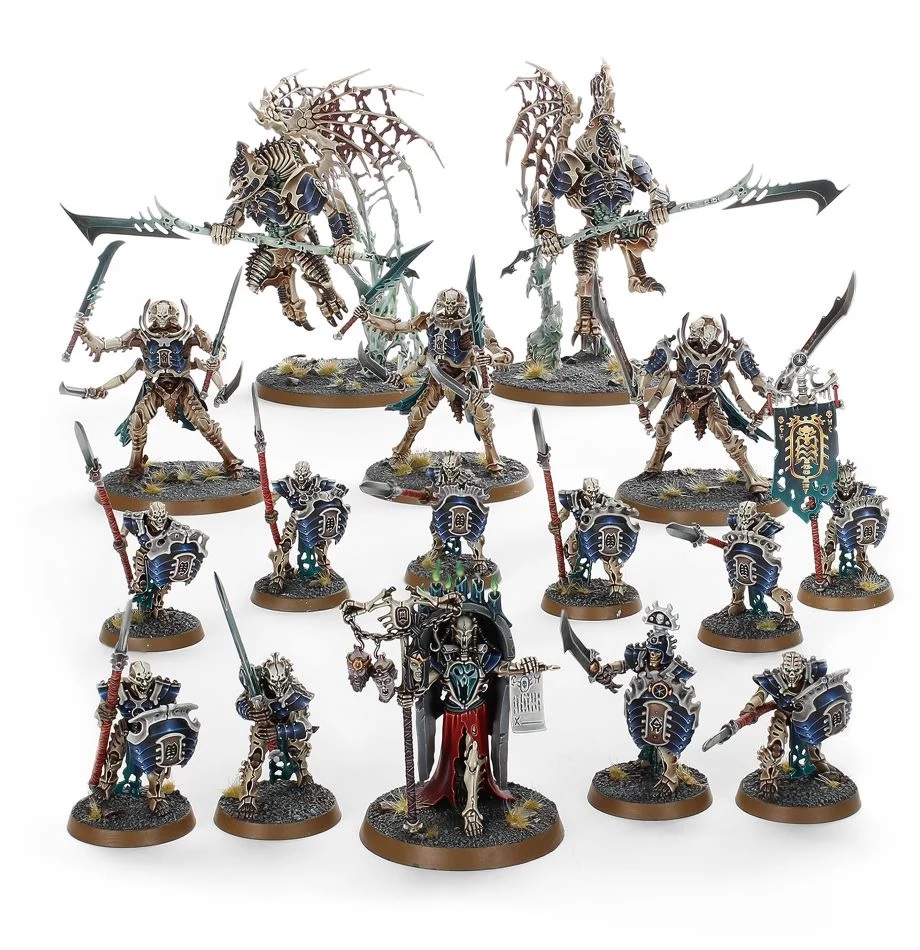 It was a little hard to gauge from this picture but now that I have the physical models I can confirm that size. For the uninitiated, this is a HUGE deal. 25mm bases mean that your second rank can get attacks in if they have 1″ range melee weapons. 25mm bases makes the unit a consensed death-ball and when you buff them up even slightly, they become even more deadly. It’s almost like a force multiplier with small bases. 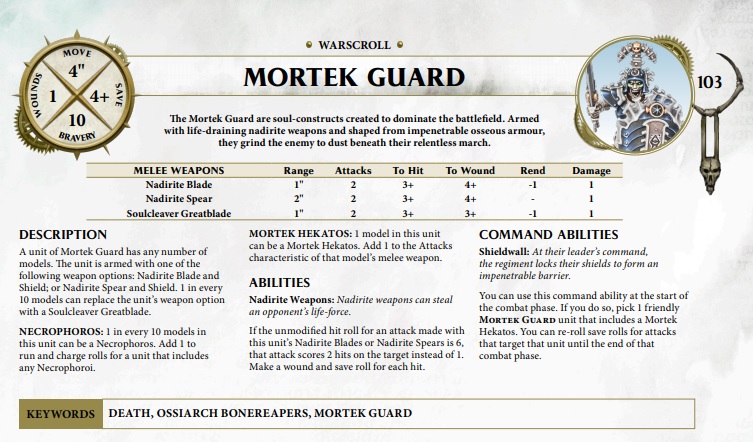 This really makes the choice between the Spears and Blades a REAL choice now. Do you go for the extra spear attacks or do you go for the -1 rend. I’m honestly up in the air right now because I do like the bonus attacks. At the same time when your battleline has a basic -1 rend and you can really pack in those models…oh man. Decisions, Decisions…

In terms of hobbying the Mortek Guard also go together really quickly. Their bodies are simple two-part assembly with a front and back. Their arms are separate and you’ll have to choose between the spear or sword but the entire unit comes with shields anyhow. They may not be super posable but there are 10 different sculpts for the bodies and you can kind of tweak their weapon arm into a different position.

The Stalkers sprues are the “full” sprues as well – so if you wanted to build Immortis Guard instead of the Necropolis Stalkers you can do that. This is another dilemma I’m having as well. GW made each unit different enough that I think there isn’t a clear “winner” and that’s a good thing. Both versions actually do things the other version can’t do. I’m still really tempted to just go with the Stalker version for the bucket of dice that can each do -2 rend and 2 damage with the Precision Aspect. 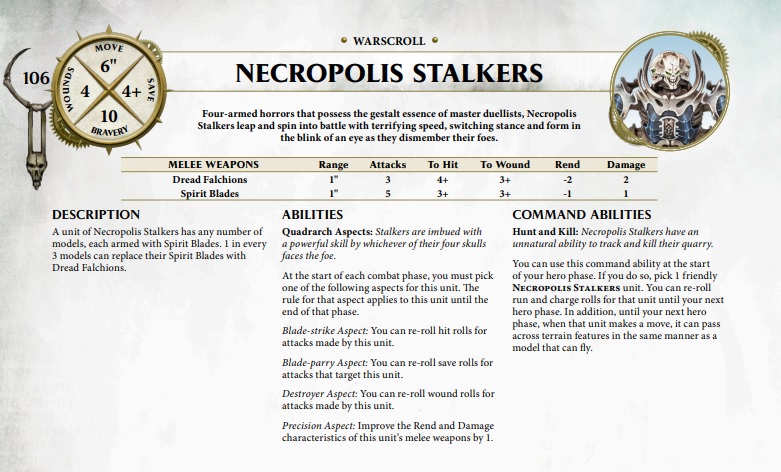 I haven’t got to dig into building them yet, but their poses and heads are a bit more customizable than the Mortek Guard which is nice. It’s a pretty cool kit and I’m looking forward to building it. The box also comes with the full sprues of the Morghasts so you can build them as either the Archai or Harbingers. And yes, they are in the Battletome for the Ossiarch Bonereapers and actually have both the Hekatos and Ossiarch Bonereaper keywords, too. These are actually the models that made me want to play Death in the first place. When they came out back during the End Times, The Morghasts caught my eye because they were so unlike anything else in the army. 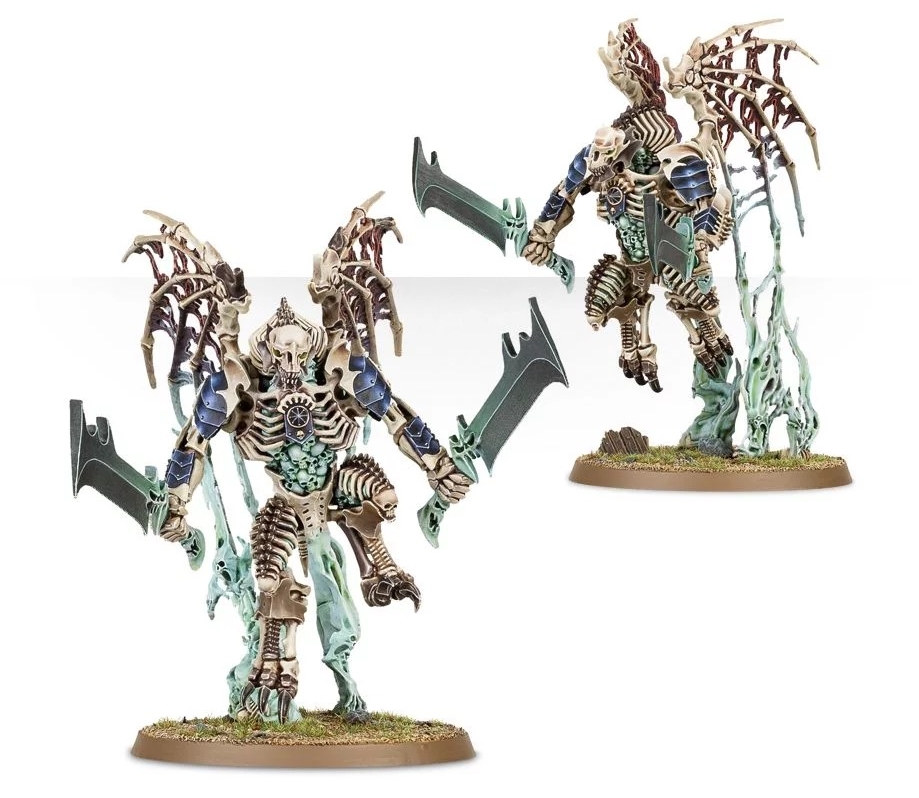 I’m glad to see their design aesthetic has finally become a reality for a FULL army of bone-constructs. They are were the vanguard of this style and I think they are going to be a big part in my lists. 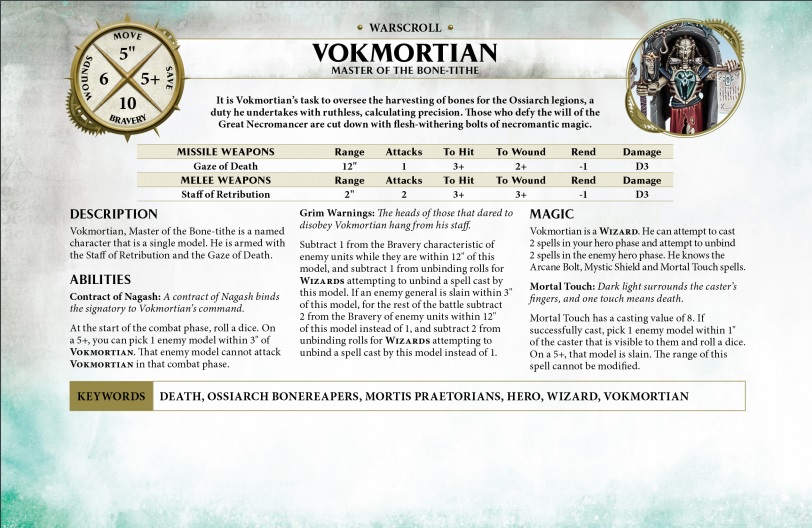 The final Ossiarch Bonereaper model in the box is the Vokmortian. This Hero is actually a unique leader so you only need 1 of them in your collection. It comes on a single sprue and it’s similar to the other heroes we’ve seen in the range. For now, the only way to get this model is from the Feast of Bones box as well. I have a feeling it might just show up in a future release however. 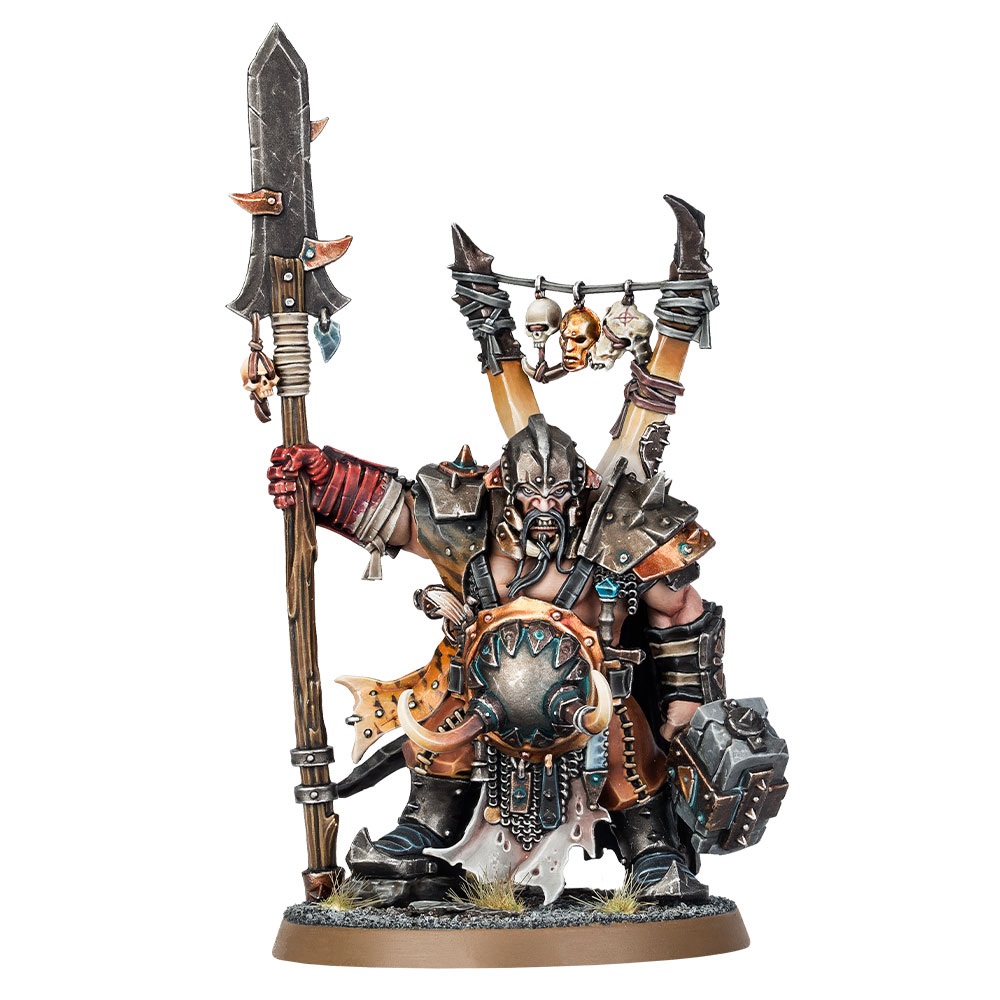 Repping the Ogors is the fantastic new Ogor Tyrant model and his crew. Now, we’re not going to go into as much detail for the Ogors (because only the Tyrant is a new model) but these guys bring the beef! 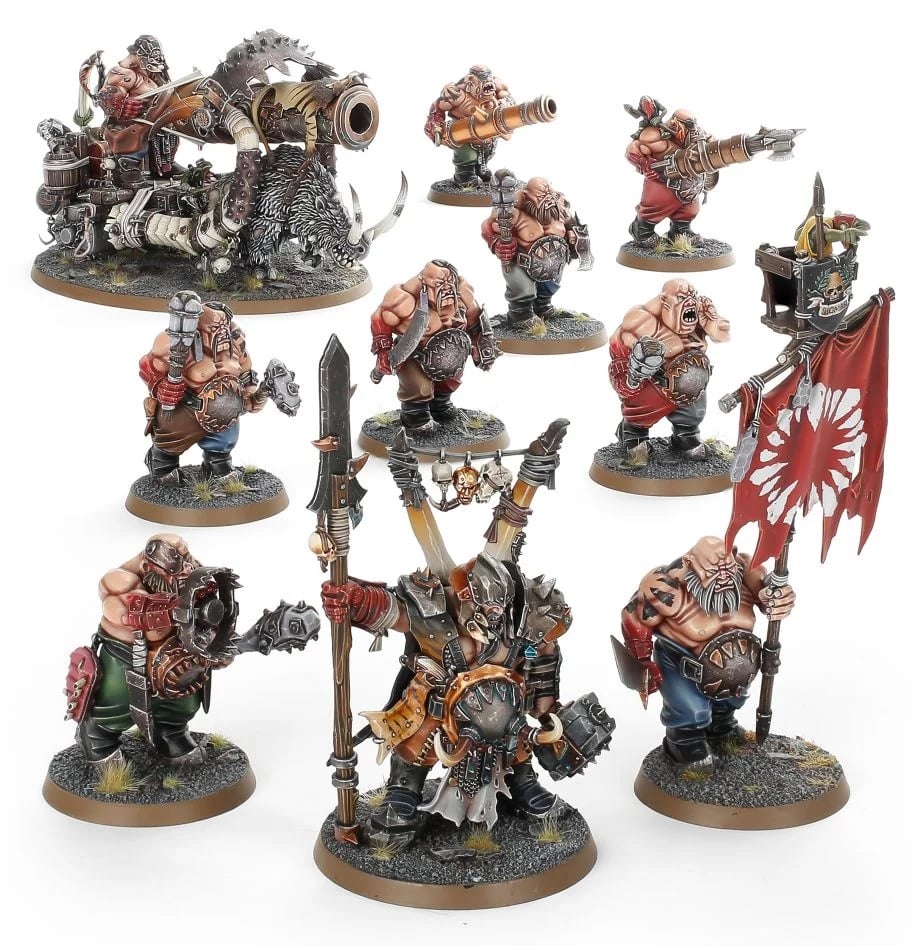 Aside from the cool new Tyrant, you get 6 Ogor Gluttons, 2 Leadbelchers, and the Ironblaster/Scraplauncher. If you’re just starting out, this is actually a very solid starting force for Ogors as well. From here you can expand to either Beastclaw Raider (cav heavy) or go with even more big blocks of infantry with the Gutbusters. The cool part is that both of these options are going to be in their new Battletome (also up for Pre-order this weekend) and they have some pretty great options, too. 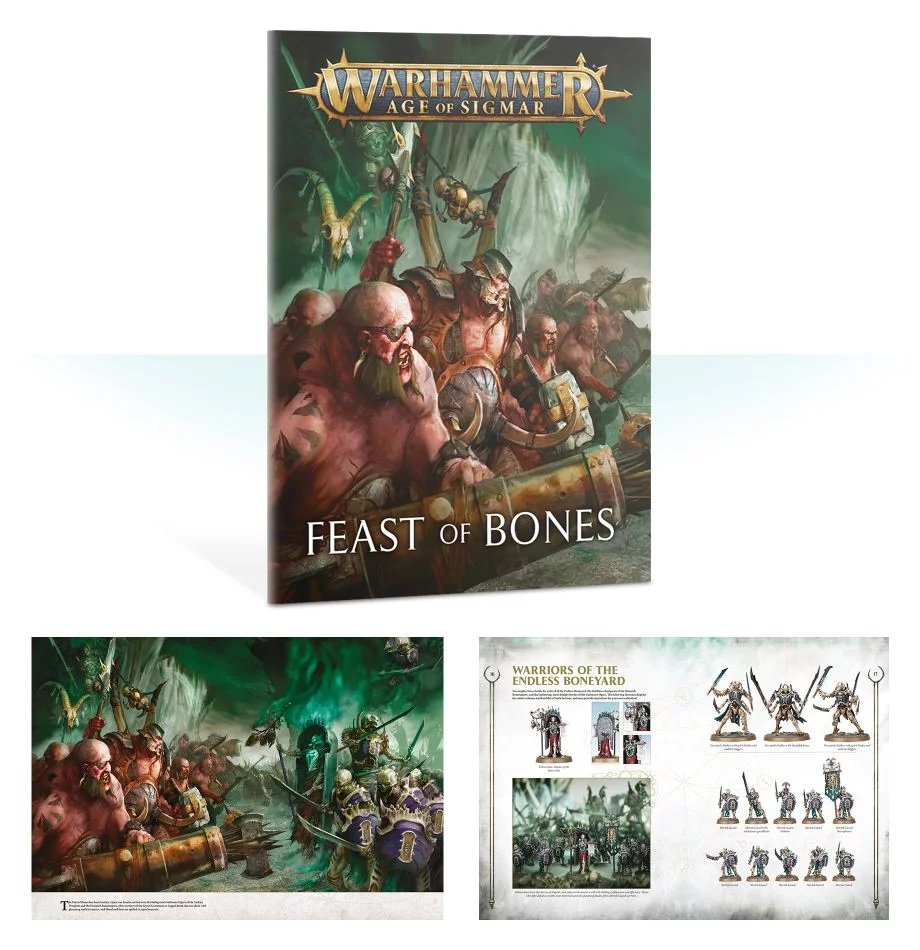 The final thing I want to mention is that the box also come with all of the extras you would expect: 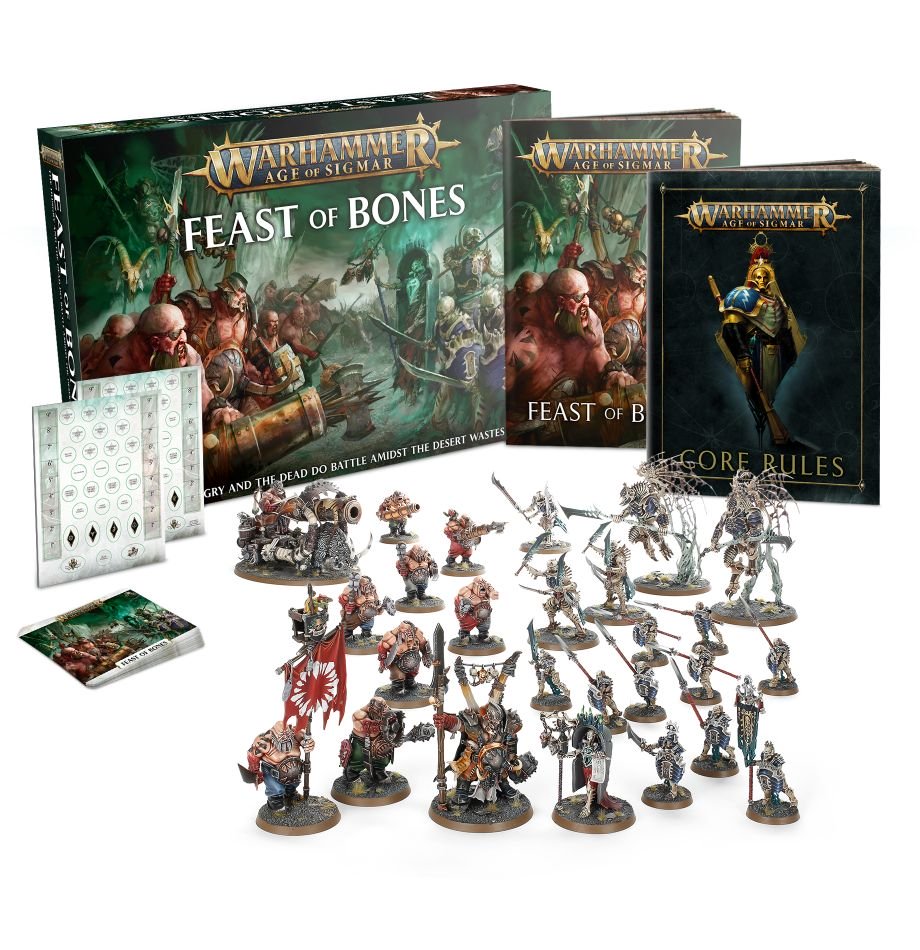 This one looks like it’s moving fast. If it’s already sold-out online, you might want to call your FLGS and see if they are taking pre-0rders before it’s gone!

Author: Adam Harrison
Writer, Editor, Texas Native, and Austinite for 15+ years, Adam covers all things Tabletop Gaming. Which includes Warhammer 40,000, Age of Sigmar, D&D, Board Games and everything else that involves dice, boards, cards and a table. A hobbyist, player, and collector of miniatures and games, Adam's current obsession are his Death Armies for Age of Sigmar, his Blood Angels and Tyranids for 40k, and his ever growing Arkham Horror: The Card Game Collection.
Advertisement
Age of Sigmar AoS Death AoS Destruction Games Workshop Miniatures Tabletop News Unboxing Videos
Advertisement