The Ironjawz are a among the baddest boyz in the Orruk warclans, and when a Megaboss charges into battle astride a Maw-Krusha, it’s Destruction incarnate.

At the head of every Ironjawz warband is the biggest, meanest, greenest, scariest ball of teeth and muscle in the squad, the Megaboss. And sometimes, that Megaboss gets so powerful that they bully a massive Maw-Krusha into submission and ride it into battle, knocking his enemies aside like a scythe through wheat. This obviously makes them a great choice to lead your Orruk force, along with the awesome abilities they bring to the table. 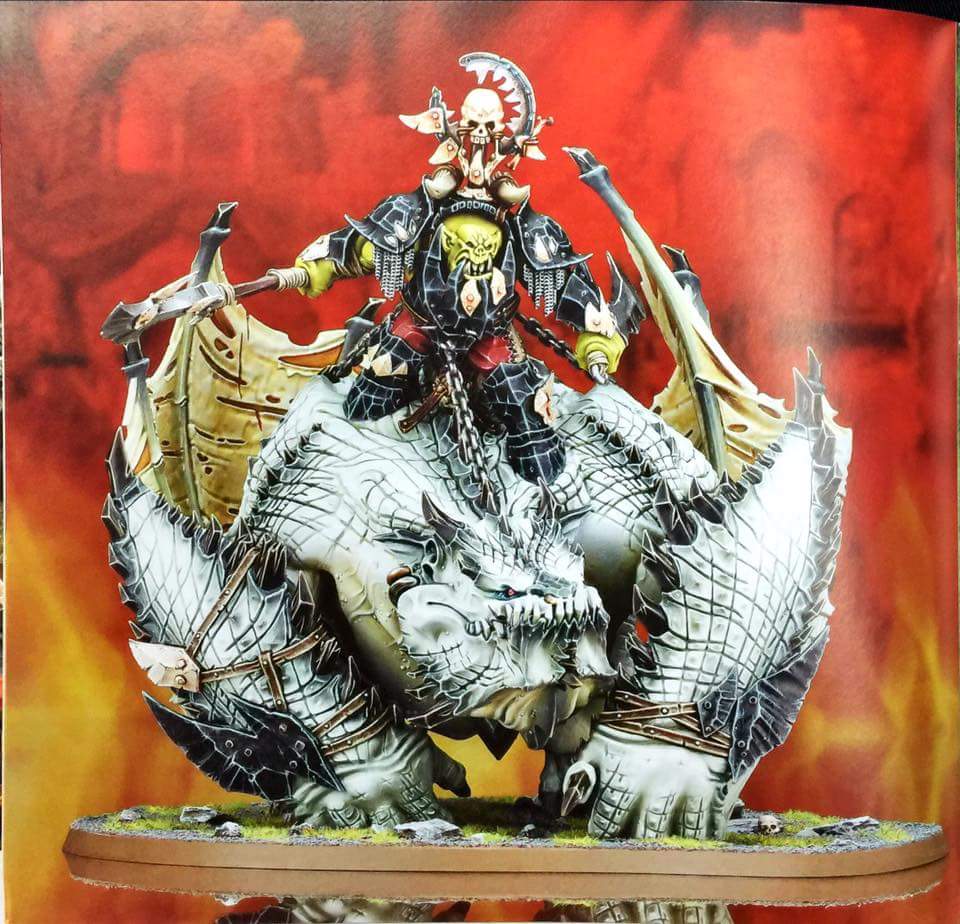 The Maw-Krusha mounted Megaboss is pretty fast, moving 12” with Fly which, combined with their racial abilities, means that they will be in combat almost immediately, which is exactly where you want them. They have a decent ranged attack, firing d6 shots with a 8” range that hit on a 2+, wound on a 3+, and have a -1 Rend. This isn’t much, and is probably better served to throw down some damage after the boss is already engaged.

As expected, however, close combat is where this fellow really shines. He has the option to take either the Gore-hacka and Choppa, which gives him slightly more attacks, or the Choppa and Rip-toof Fist, which provides him a punishing retaliation chance. Both weapons hit and wound on a 3+, have Rend -1, and deal 2 damage, but the Gore-Hacka has a 2” range and 8 attacks while the Rip-toof has only a 1” range and 6 attacks. In addition to the Megaboss’s attacks, the Maw-Krusha can smash the enemy with their fists and tail, getting (at full health) 8 attacks that hit and wound on a 3+, have a Rend of -2, and do 2 damage each. 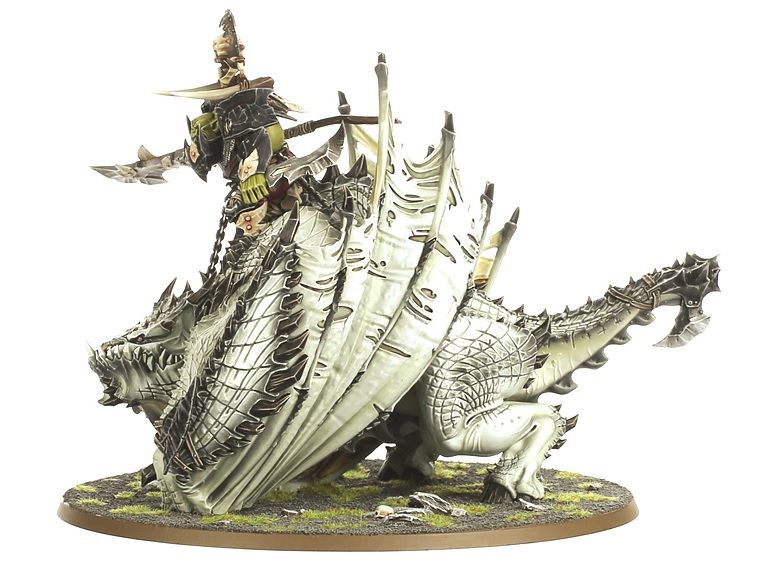 If all those attacks aren’t quite enough for you, don’t worry; the Maw-Krusha also deals damage just by running headlong into the enemy. When the Maw-Krusha successfully charges, you can roll a number of dice (8 at full health) and deal a mortal wound to a unit within 1” for every 5+. But that’s now all this ability can do; should these mortal wounds completely wipe the enemy, the Maw-Krusha can attempt to charge again, so great is the source of their ferocity and their rider’s rage. In addition, if your boss killed any models in the combat phase, he gets an extra wound and an extra attack added to his Choppa weapon, making it likely he will go on to kill MORE enemy models.

As expected of an armed mountain of muscle riding an even bigger mountain of muscle, the Megaboss is pretty tough. It starts the game with 15 wounds, which as shown above can increase over the course of the battle, and has a 3+ save. If you took the Rip-toof weapon, should you roll an unmodified 6 on your armor save, regardless of whether or not the save is successful (though I can’t think of much that can completely deny a 3+ save), you will throw a mortal wound back on the attacker.

This guy is an absolute semi-truck on the battlefield, both on offense and defense, but it also has some good support abilities to help out the rest of your green horde. First, since it’s an Ironjaw Megaboss, it can throw out a Waaagh to get them stuck in and doing damage almost immediately. Beyond that, its command ability allows it to pick an Ironjawz unit wholly within 18” and add 1 to their hit rolls for the rest of the combat phase. As if the the Ironjawz needed more power to their close combat phase, this command ability will almost guarantee a unit wipe.

What is your favorite Orruk hero?