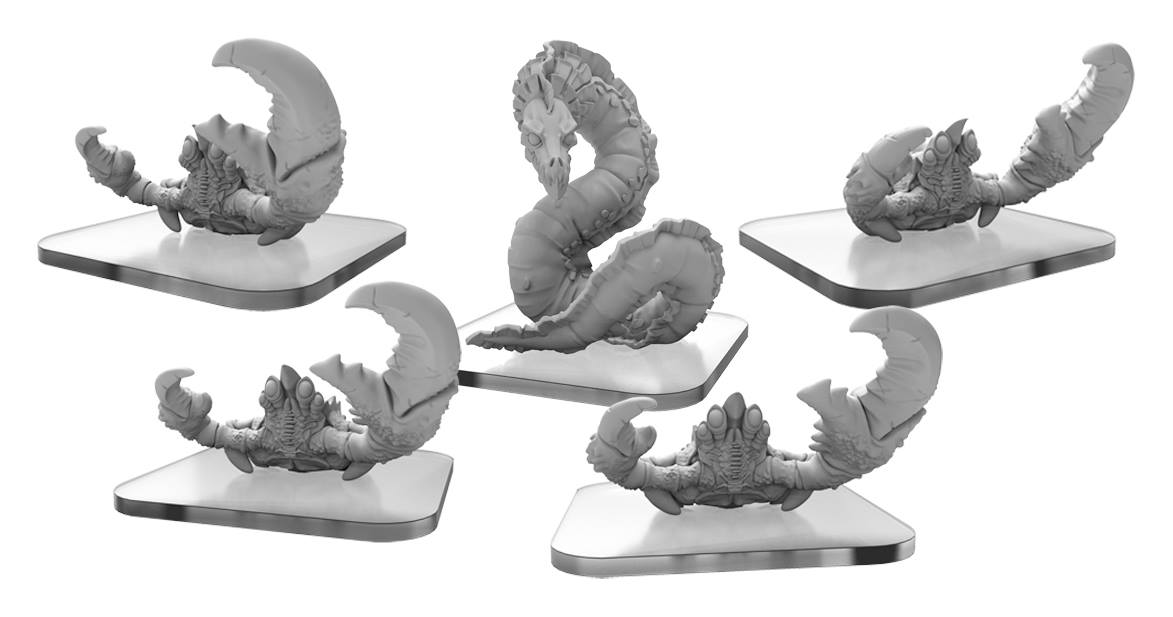 Via Privateer Press –
MSRP: $29.99
Contains:
Steel Shell Crabs (3)
Elite Steel Shell Crab (1)
Psi-Eel (1)
Following in the wake of the first great Triton beast to emerge from the ocean’s depths, these lesser creatures would still qualify as sea monsters if you found one washed up on the beach. steel shell crabs are so named because of their incredibly dense exoskeletons. In the first skirmishes between these mega crustaceans and G.U.A.R.D. forces, the crabs’ shells were virtually immune to all but the largest ordnance. Luckily, it was soon apparent that, like their larger counterparts, the steel shell crabs were more interested in fighting Earth’s invaders than anything native to the planet.
Slithering behind waves of crabs come the psi-eels. Human scientists have so far failed to capture a live specimen, so the full extent of their abilities is untested, but from battlefield readings it appears that they have mental capacities hitherto only seen in the extra-dimensional beasts assaulting the planet.
TRADE POINTS: This blister pack provides the first Tritons unit reinforcements for Protectors players. Steel Sheel Crabs emerge from the ocean, Digging into to friendly territory in an attempt to save the planet from any who would seek to destroy it. Psi-Eels use their powerful Telekinesis abilities to stifle an invader’s best-laid plans.

Via Privateer Press –
MSRP: $32.99
Contains:
Mollock Brutes (3)
Elite Mollock Brute (1)
Mollock Berserker (1)
Among the Subterrans, the mollocks are a caste of battle-ready warriors noted for their ferocity and fearlessness. After being surgically equipped with prosthetic grinders and drills, the greater tyrants send mollocks to the surface to murder and destroy. Mollock brutes display a wider array of machined replacements geared toward melee confrontations. Berserkers erupt from the ground to startle and flank foes and enter a frenzied trance-like state until no foes remain.
TRADE POINTS: This blister pack provides the first Subterran Uprising unit reinforcements for Destroyers players. Mollock Brutes advance across human cities digging just below the surface, Cloaked from enemy eyes until they burst forth to take down their master’s target. Even more frightening than its common Mollock brothers, the Mollock Berserker shuns all subterfuge, intent on Berserking its way through as many enemies as possible before it falls to hails of cannon fire. 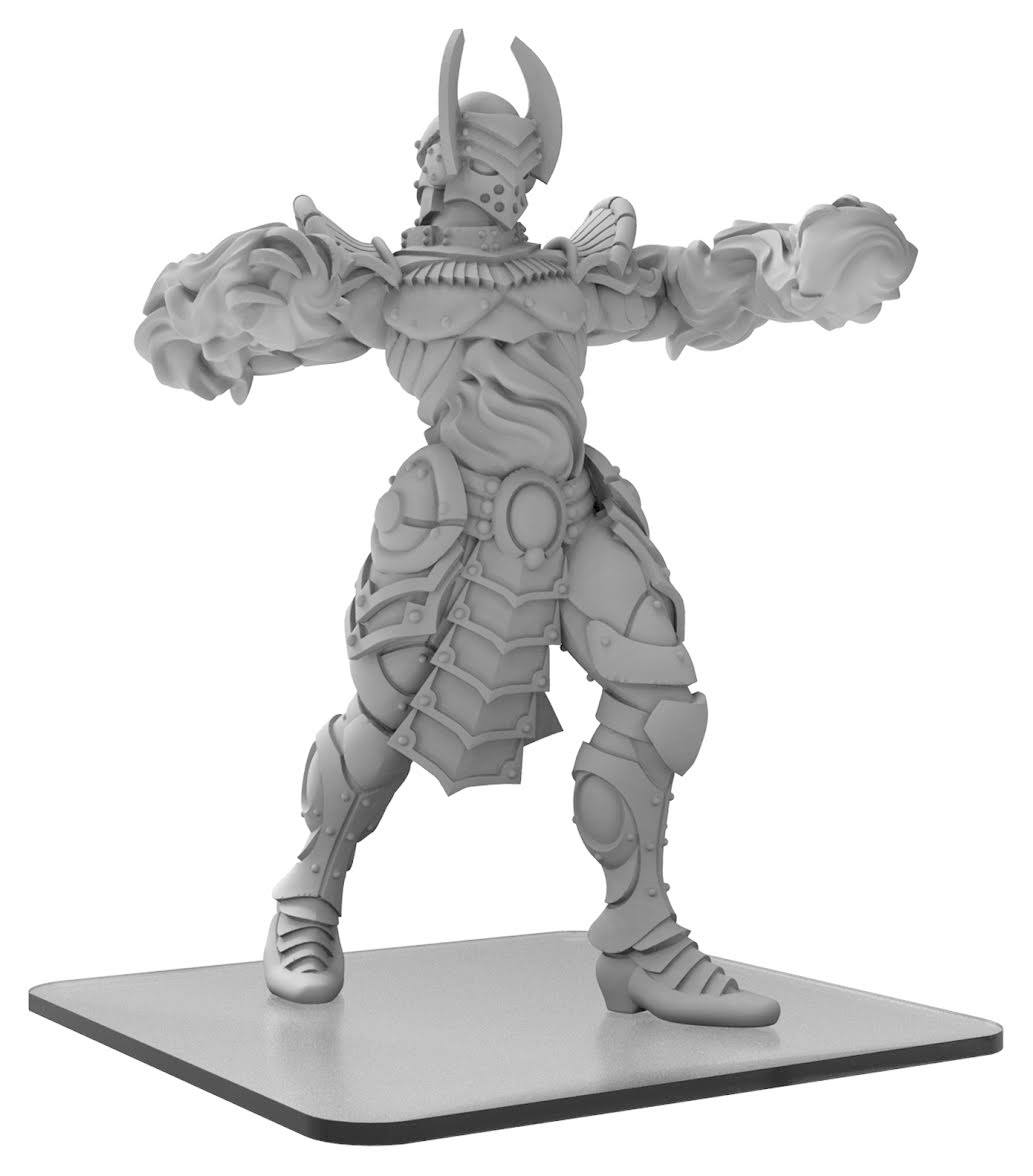 Via Privateer Press –
MSRP: $23.99
Though his body is wreathed in flame, only good intentions fill Incinerus’ blazing heart. The Elemental Champions belong to a secret society of powerful mystics who can tap into the primal energies of the earth itself. By internalizing and harnessing these flows through his body, Incinerus grows to colossal proportions and becomes a self-contained inferno of righteousness, rendering to ash any who would imperil the innocent.
TRADE POINTS: Incinerus is an offensive monster that can be added to any Protectors force. Made of the essence of fire, he casually steps through hazards to get to his foes. Any debris that isn’t a raging inferno bursts into flames with a snap of his fingers. When he goes hyper, his burning rage is so strong that rubble ignites as he approaches and the fireballs he hurls at enemies Explode, showering the area with holy flames 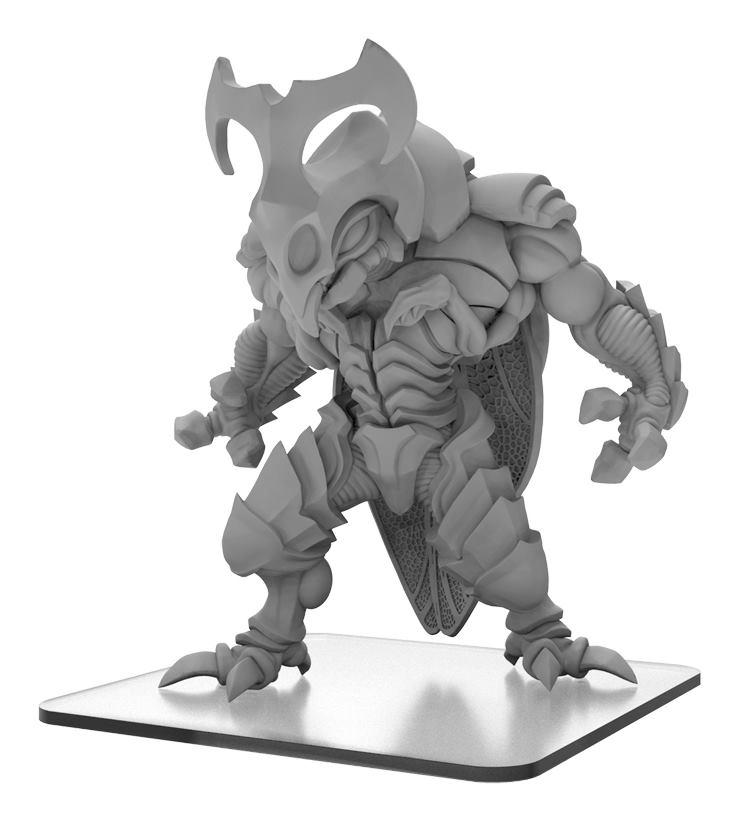 Amazing sculpt, can’t wait to get this on the table!

Via Privateer Press –
MSRP: $26.99
The existence of the Savage Swarm has produced rampant speculation in fields as far apart as biology and theology. Preceded by the drone of a thousand-thousand buzzing wings, Xixorax emerges from craters in the earth to erupt as a force of urban destruction. Resembling a gigantic bipedal beetle, Xixorax shows none of the regard for the natural world or humanity that is demonstrated by the Terrasaurs and Empire of the Apes. Whether he has any intelligence or is motivated by any desire other than pure annihilation remains to be seen.
TRADE POINTS: Xixorax is an Offensive monster that can be added to any Destroyers force. This juggernaut of insectile force rampages through the cities of mankind with no apparent goal other than rampant destruction. When he goes hyper, he uses his opponents as weapons, masterfully knocking down buildings by slamming or throwing opponents into them.

January is shaping up to be an incredible month for MonPoc! Finally getting Krackenoctus and Hammerklak on the table with some Faction units is gonna be awesome.
Which monster do you like the look of more? Xixorax or Incinerus?