Warhammer 40K Lore: The Gravitas Of The Imperium 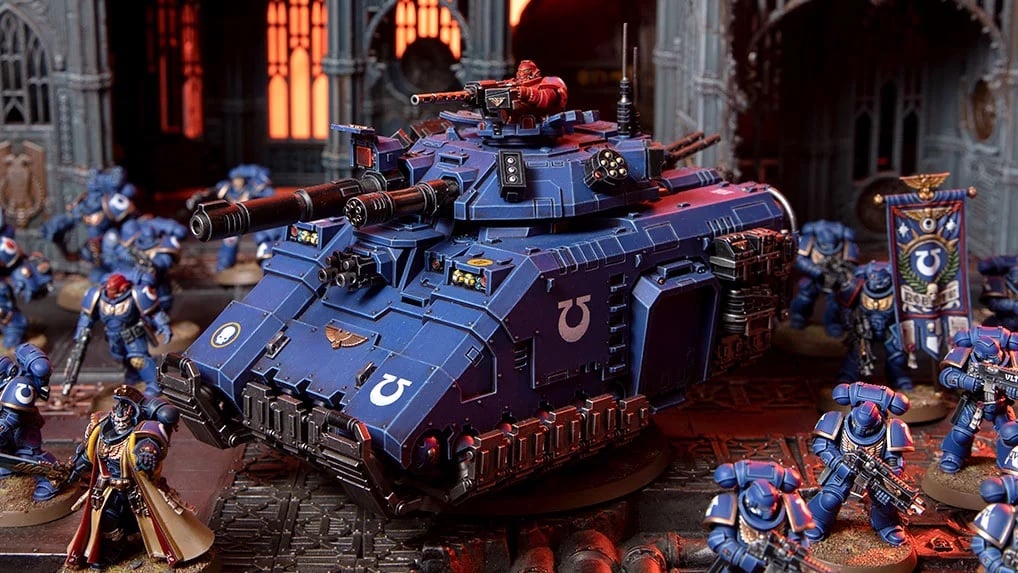 Greetings Loremasters and Loremaster initiates, today we take a look at the lighter side of the Imperial armory, as the Adeptus Mechanicus have mastered even gravity itself.

There is no force in this galaxy, natural or otherwise, that is beyond the reach of the Imperium. With the tech-priests of the Adeptus Mechanicus to handle the secrets of the Universe that the Emperor has deemed safe for humanity to unlock, and the Astra Militarum and Adeptus Astartes to handle the rest, the fabric of the cosmos itself bends to the Emperor’s will. And nowhere is this more visible than in the Imperium’s total dominion of gravity, a feat no other species has ever managed to achieve.

From the humble Jetbike, common among the Space Marine Legions during the Great Crusade and the Heresy, typically operated by Sky Hunter Squadrons–but whose plans have been sadly lost to the vagaries of time–a shame since these bikes were equipped with powerful weaponry. The last known version was the Mk14 ‘Bullock’ jet-cycle, equipped with integrated auto-drive, and additionally, some were equipped with bio-scanners, energy-scanners, communicators, and auto-aim devices linked to the vehicle’s weapons. Standard weapons were twin forward-firing bolters and could seat a single rider. The jet-cycle was capable of both flight and hover modes, and could be used in aerial-drop separation tactics (dropping out of drop ships before the ships land).

…to the humble Land Speeder, a humble legacy of the famous Arkhan Land, but whose precious swiftness comes at considerable expense: Land Speeders are based on STC data recovered in M31 by the famous Techno-archaeologist Arkhan Land, and afterwards became widely produced and used throughout the Imperium. Land Speeders were also originally used by the Imperial Guard, but since then the plasma and anti-gravity technologies required to produce them have become increasingly rare and hard to maintain.

The anti-gravitic plates which give the Land Speeder its ability to fly remains a mystery restricted mostly to the Tech-Magos of the Adeptus Mechanicus. Placed around the nose and cockpit of the vehicle they create an inverse gravity field which, in combination with afterburning ramjets, allows it to climb to a height of one hundred meters but the official doctrine dictated that Land Speeders should use the ground as cover and don’t climb up to high height. 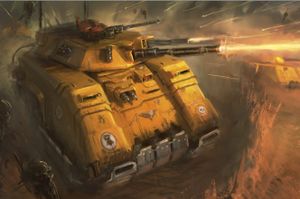 However, nowhere is that more prevalent than in the mastery displayed in the new vehicles of the Primaris Astartes. First we have the Repulsor, which displayes a suitably aggressive mastery of gravity.

The Repulsor armoured transport is a deadly combination of maneuverability and brute force. Due to the turbine array at its rear, it has tremendous power, and it is held aloft by powerful anti-gravitic generators. The Repulsor is so heavily armed and armoured that it does not skim over the landscape as many grav-tanks do, but instead crushes the ground below it, grinding apart any caught within its field. The tank he designed is indeed capable of traversing almost any terrain, even lava streams or lakes of boiling acid should the need arise. However, it moves little faster than the armoured behemoth of the Land Raider, for its power is directed more into the manipulation of clashing gravitic energies than forward motion. 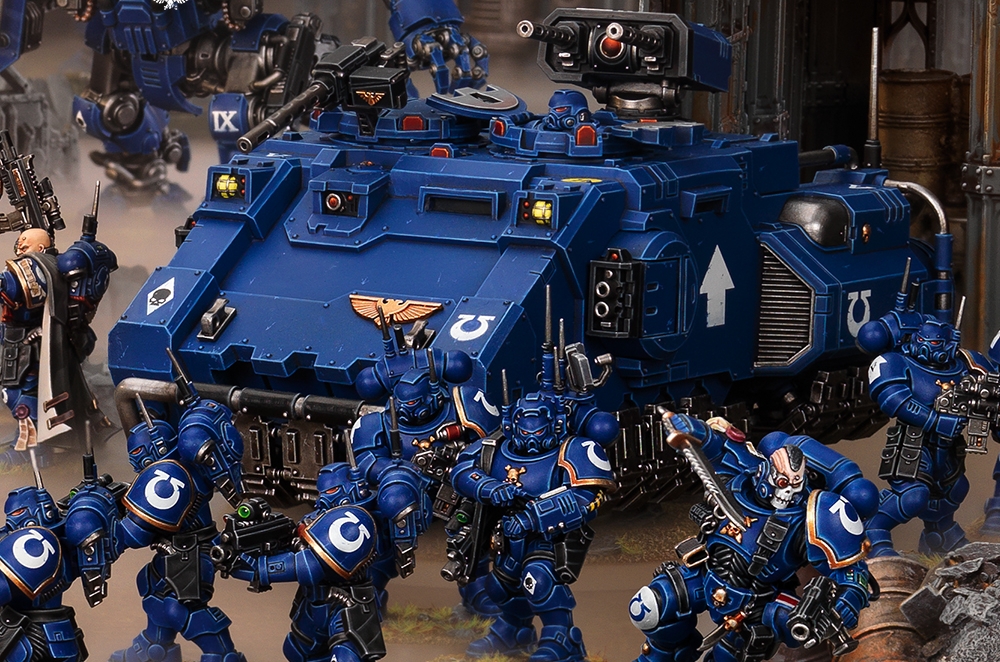 And the Impulsor, whose swift transports carry our battle brethren into brethren battle. The Impulsor is a lightly armored and fast-moving assault transport favored by Vanguard Space Marines. Benefiting from the same advanced gravitic-impulsion technology used by Repulsors, the Impulsor boasts vectored thrusters that give the vehicle a large degree of speed. Its open-backed design allows it to transport a squad of Space Marines directly into battle, entirely by bypassing obstacles such as trenches, river deltas, toxic runoff, and the like. Typically, these vehicles are saved for the delivery of the killing blow by Vanguard forces, or else employed in a similar capacity to the Rhino by Primaris forces who wish to deploy mass armored columns or perform rapid flanking maneuvers.

As befits a vehicle that is often its squads only support in hostile territory, the Impulsor can be rapidly refitted with a variety of weapons and defensive systems. These include an advanced shield dome atop its hull that sheathes its in a shimmering refractor field. Forward reconnaissance missions see it use envoy-class vox and auspex arrays, while those squads requiring additional fire support can call upon the Bellicatus Missile Array or twined Icarus Ironhail Heavy Stubbers.

Remember, the forces of the galaxy are the Imperium’s to control, if someone purports mastery otherwise, it’s base heresy and should be dealt with summarily.