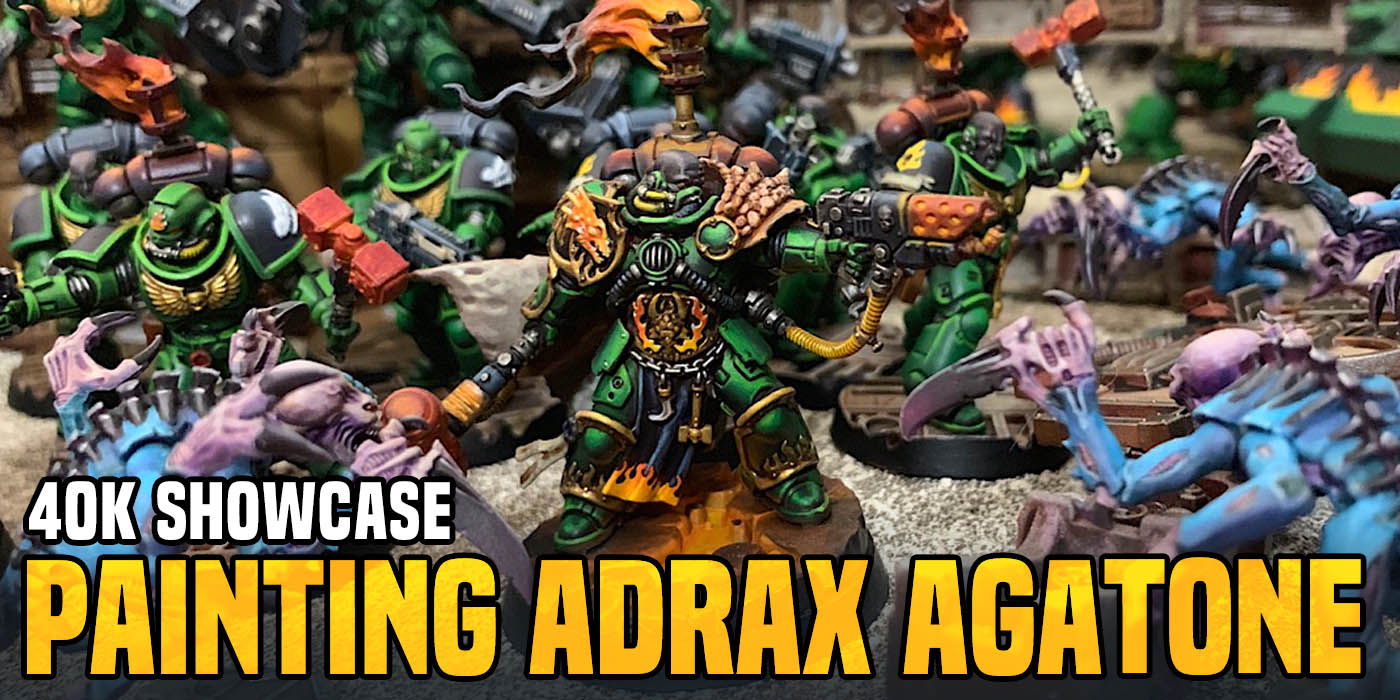 I know you love Salamanders! Here’s a step-by-step of how I painted the new Captain Agatone.

I’ve recently begun painting my Salamanders with a deep red basecoat rather than the usual gray. The tiny amount of red showing through when they’re done can really help make the green pop.

After that I gave him a quick blast of dark brown – it’s mostly Rhinox Hide mixed with a little Abaddon Black and Khorne Red. Then I begin building up the green in layers. Caliban Green is first, followed by Warpstone Green, then Moot Green, then Moot Green with a little white mixed in. This article has a bit more on painting the green. This time though I wasn’t using an airbursh, wet blending everything instead.

A few more blended layers of green are required to smooth out the armor.

Then I line the edges of all the armor plates with Moot Green. In a few areas, such as around the neck, a little white is added to the Moot Green to make it pop a little more. Additionally all the areas that will be gold, orange, or yellow are base-coated with Averland Sunset.

The gold trim on the armor plates is drybrushed with Auric Gold and washed with Agrax Earth. I start the flames on the tabard and belt by blending on a gradient of Flash Gitz Yellow to Troll Slayer Orange over the Averland base. The same orange is used on the Salamander Crest. I use a mix of Averland and Troll Slayer Orange on the hammer and flamer as the start of a glow effect. I should have just started with pure Averland in the previous step. But I forgot.

I start the tabard flames with some carefully placed black spots. I drybrushed the hammer with Khorne Red to help achieve the red hot effect.

Using the dots as a guide I finished the rest of the flames on the tabard with more black. The black also goes on the flamer, the torso tubes, and the little “generator” area on the hammer between the head and the haft. All the black is highlighted with Thunderhawk Blue and Fenrisian Gray. Speaking of tubes I painted the remaining tubes with Averland sunset since I decided to make them yellow too. Then they got a wash with a mix of Agrax Earth and Feugan Orange. The scaly cloak was basecoated with Tau Light Ocher.

Here’s a look at his back. First it’s just the Tau Ocher and Agrax/Feugan wash. Then the scales are highlighted with a mix of Ocher and Screaming Skull.

I also wanted to show osl on the backpack. Three of these shots are from an intercessor sergenat since I didn’t get good pictures of Adrax’s.

I started with a yellow basecoat on the flame. Layers of orange, then Mephiston Red, then finally a little black are blended in leaving the lightest areas at the source of the flame. Then Rhinox Hide is used to paint the metal of the brazier itself. On the backpack the black basecoat has highlights of Mephisto Red blended in accentuating the round shape. Another layer of pure Mephiston follow before a final highlight of Troll Slayer Orange is blended in at the very top. Then all the edges near the torch get a thin line of Troll Slayer Orange.

The palette and steps for the base are nearly identical, but the glow-y “highlights” are kept towards the edge of the rocks. 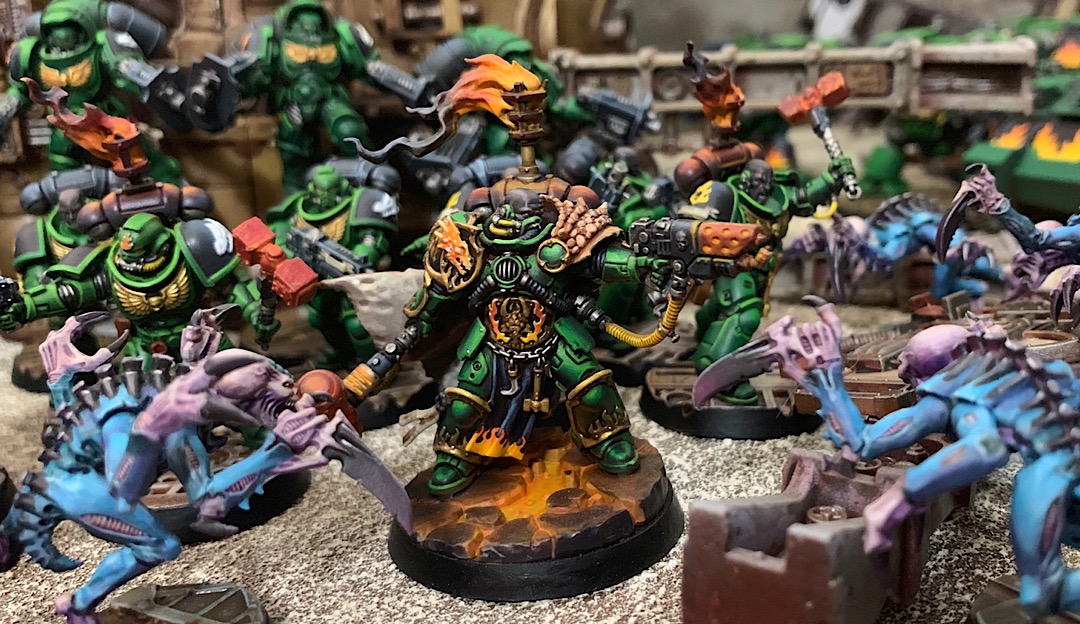 And now Adrax is ready to smite the Emperor’s foes alongside his fellow Salamanders.

Why not paint up a bunch more while you’re at it?

~ Hope you enjoyed the article! Have the sons of Vulkan been tearing it up in your neck of the woods?

Author: Ben Williams
Ben Willimans is a Professional Painter and Columnist at Bell of Lost Souls. He has been involved in the hobby and art side of miniatures and the tabletop gaming industry for over 20 years. He has won multiple national painting awards.
Advertisement
Game Tutorial Hobby Painting Space Marines Warhammer 40k
Advertisement