In the new Ogor Mawtribes battletome, a once proud commander has become a mere hero, bereft of a name. He’s still pretty rad though, check him out.

For Age of Sigmar, GW has had a field day converting some of their legendary heroes of old into generic heroes (looking at you Prince Araloth). With the new Ogor Mawtribes battletome, yet another mighty leader has fallen to the ranks of “standard”, but not without dragging a massive cauldron full of rad rules along with him. Here are my thoughts on the Artist Formerly Known as Skrag, and how I think he can be utilized on the battlefield. 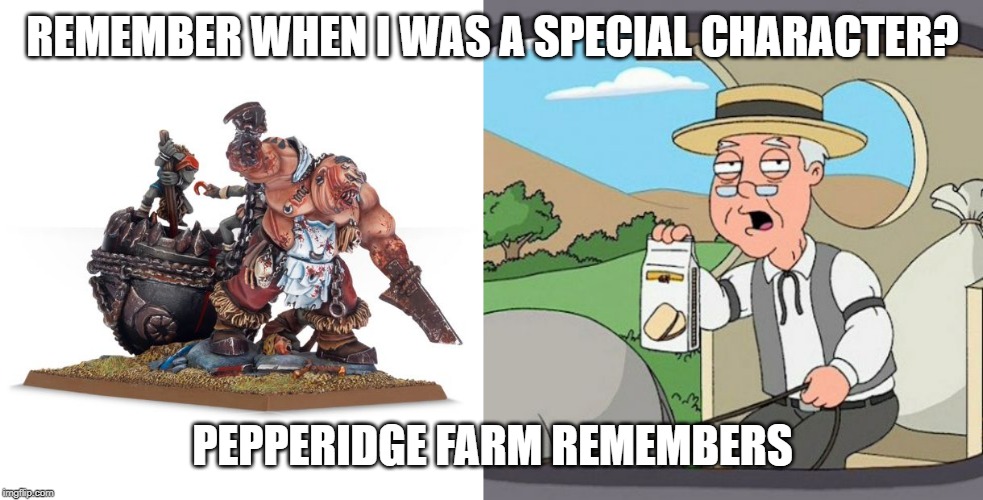 Like all Ogors, Slaughtermasters are a pretty hefty block of wounds, rocking 7, which isn’t perhaps all THAT high as heroes go but is certainly higher than most foot wizards. Unfortunately, also like all Ogors, their armor is a little on the low side, so they certainly won’t survive a protracted or focused stint in close combat.

However, they certainly aren’t without defenses, such as the Bloodgruel ability, which allows you to roll a d6 whenever you successfully cast or unbind a spell, taking a mortal wound on a 1 but healing yourself 1 wound on a 2+. A 1 in 6 chance to keep your meaty spellcaster alive a few rounds longer is certainly worth considering, so always make sure that your Slaughtermaster is in range to unbind in your enemy’s hero phase. 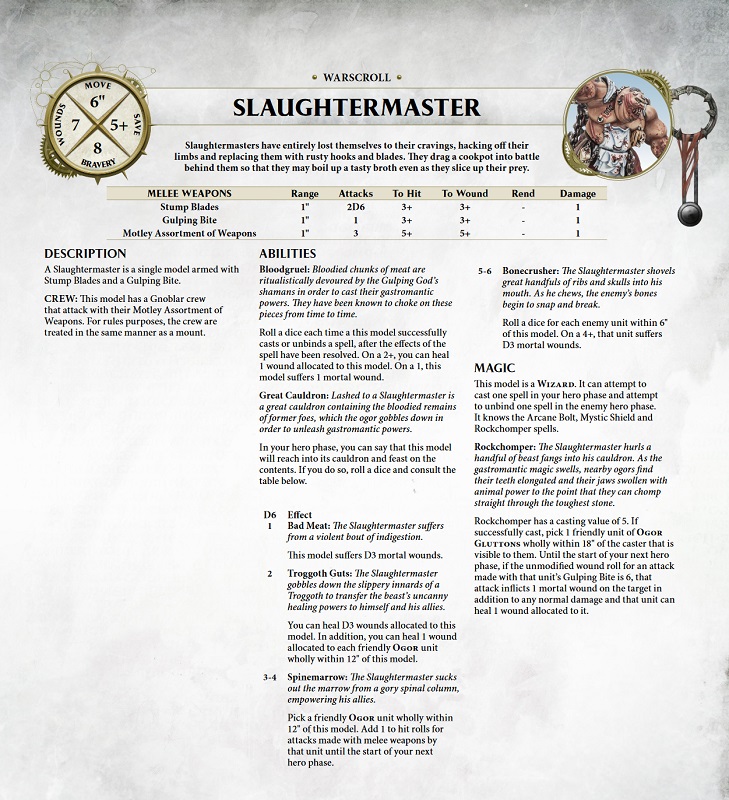 The other ability ex-Skrag brings to the table is his Great Cauldron, which allows him to reach into the massive pot he has chained to his back and sample some delicious magical foodstuffs. When you decide you want to take a bite, roll a d6 and hope you fish out something tasty.

On a 1, you unfortunately have not, and you suffer a mortal wound and the horrifying thought of what terrible morsel is enough to make an Ogor sick. On a 2, you dig out some savory Troll guts, regenerating d3 wounds to the Slaughtermaster and 1 wound to all your Ogor units wholly within 12”. Roll a 3 or 4, and your Death Chef pulls out a roasted spinal column, which allows you to add 1 to the hit rolls of one Ogor unit wholly within 12” (I’m sensing a pattern of support here). 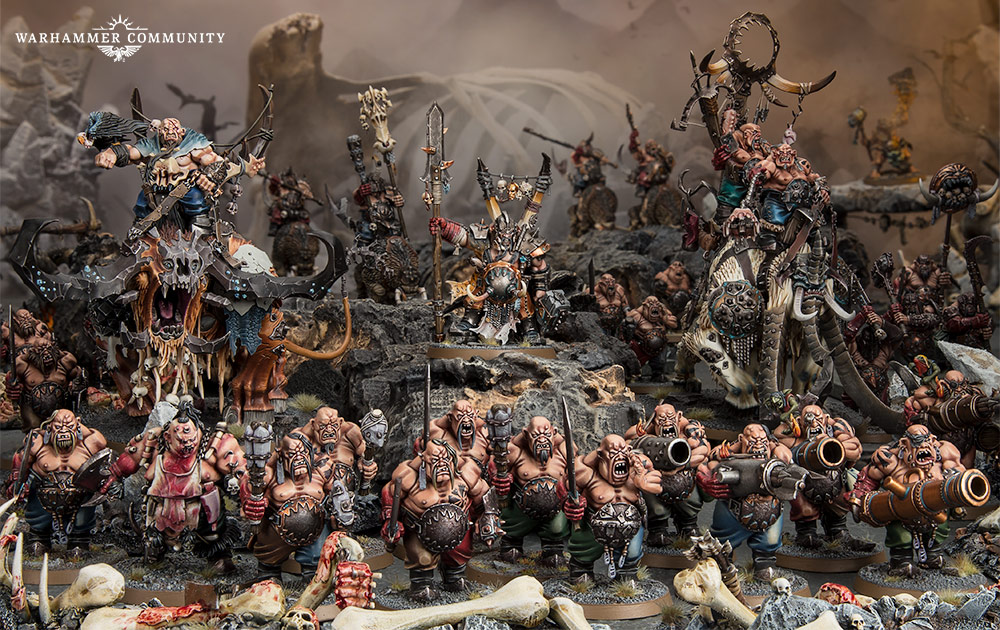 But don’t worry, if healing and support aren’t your dish of choice, there’s an entree for you too, because if you happen to roll a 5 or 6, the cook has pulled out a massive handful of soup bones, and as he crunches down, the bones of his enemies snap too. When this happens, you roll a d6 for each enemy unit within 6”, dealing d3 mortal wounds on a 4+.

But the best part is, after all those other awesome abilities, the Slaughtermaster is still a Gutmagic wizard, and he’s signature spell, Rockchomper, is an incredible utility piece, especially if he is near some large friendly units (which he REALLY should be to take advantage of all his gubbins). It casts on a 5+, and should it be successful, one unit wholly within 18” has their Gulping Bite attack empowered, making an unmodified 6 to hit inflict 1 mortal wound AND heal 1 wound allocated to the unit. For maximum power, give this to a big unit of Gluttons and watch them survive the entire game. 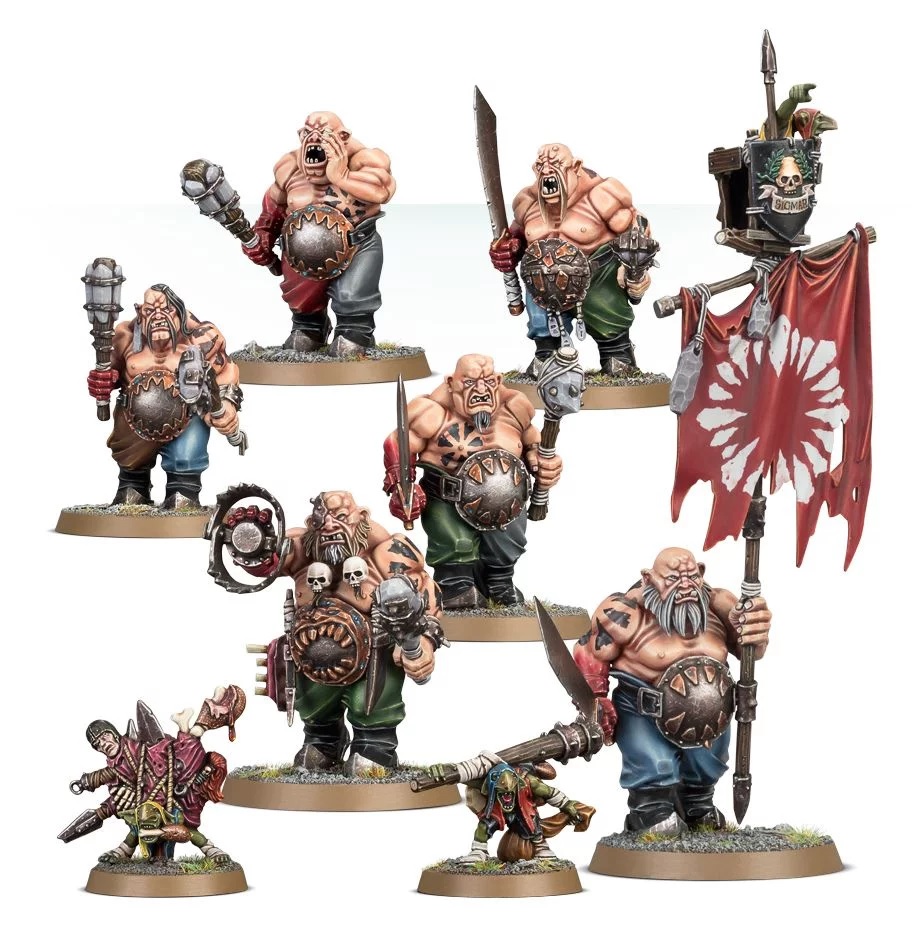 Unlike most spellcasters the Slaughtermaster is also a big bundle of attacks, which is handy since he is at his most deadly on the front lines. He is accompanied to battle by a crew of Gnoblar who help him heft the massive cauldron across the battlefield and try not to end up in the stew themselves.

They attack with their Motley Assortment of Weapons, which gives the Slaughtermaster 3 5+/5+ 1 damage attacks (they’re Gnoblars, what do you expect?). As with all Ogors, he can also take a bite out of his enemies, giving him a single 3+/3+ attack that deals one damage and, should you target him with his own spell, the chance to dish out a mortal wound and heal himself. But the piece de resistance of his attack group is his Stump Blades, the grimy cooking utensils he has replaced his missing hands with, which give him a whopping 2d6 3+/3+ attacks, each dealing one damage a piece.

Even with no rend, the possibility to attack 12 times and hit on 3s means that SOMETHING is probably going to land. For excellent support synergy, make your Mawtribe the Bloodgullet (which you should anyway, those guys are amazing) and make your Slaughtermasters Stump Blades the Splatter-cleaver. Run in, eat some junk, smack enemies, and heal. Rinse, lather, repeat, cast an extra spell; what more could you ask for?

Will you be using the Slaughtermaster in your Ogor army?

Author: Clint Lienau
Originally from North Carolina, Clint comes to Austin as the latest in a long list of haunts of a wandering actor. An avid gamer, writer, actor, pyrotechnician, and general nerd, he writes two Age of Sigmar weekly articles for Bell of Lost Souls from a slightly less than meta angle, plus a weekly tournament roundup. When not busy being a clueless cowboy, Winterfell Bannermen, or whatever else acting life throws at him, he enjoys reading folklore from around the world, writing narratives for his Wargaming armies, or watching all the movies he can. Look for his storytelling podcast, By the Dancing Fire, or find him on Twitch at RedWendigo13.
Advertisement
Age of Sigmar Rules Tabletop News
Advertisement