D&D vs. Rick And Morty – The BOLS Review 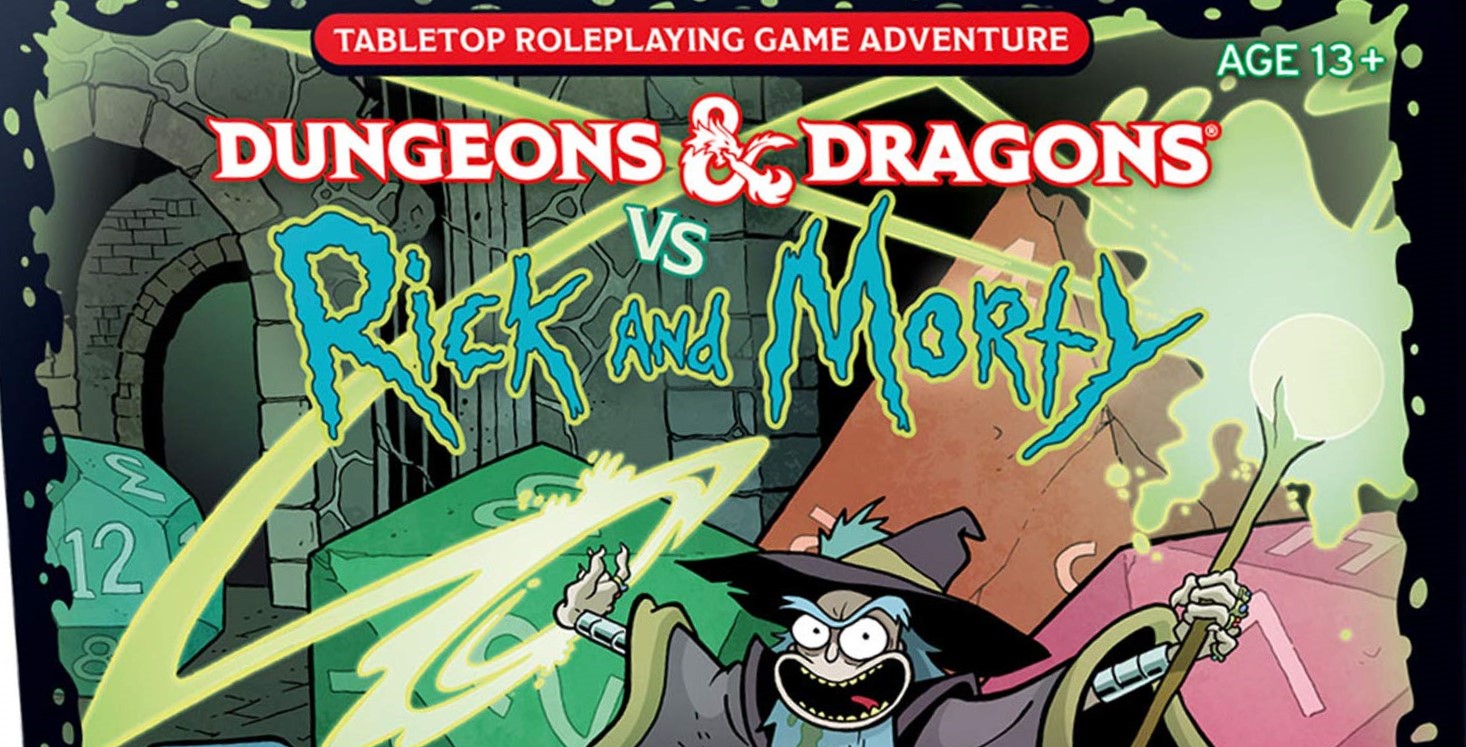 D&D’s latest starter set brings the foul-mouthed, dimension hopping, humor-filled adventures of Rick and Morty to the world of Dungeons & Dragons in a brand new starter box that features a streamlined version of the intro to D&D rules, as well as an adventure that takes characters from levels 1-3. You’ll also find a set of green and blue Rick and Morty dice, as well as a DM screen beautifully illustrated in the iconic animation’s style. 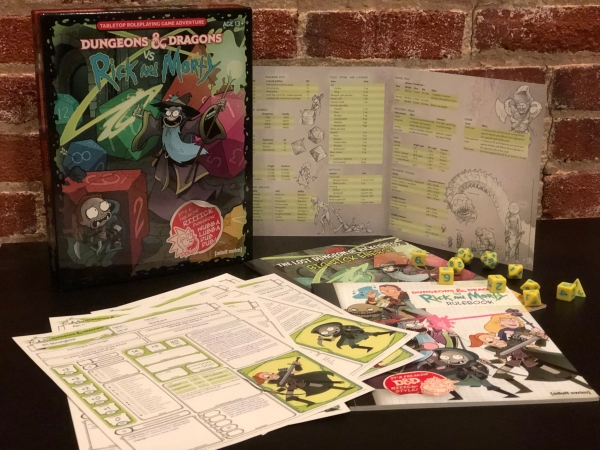 It’s roughly the same sort of thing you’d expect in any box, though this one is heavily themed. It shares more in common with the Lost Mine of Phandelver than the new D&D Essentials kit, which is more focused on players creating their own characters and jumping into their own narrative. Not to say that the adventure here isn’t original–but like in LMOP players will take control of a set of pregenerated characters. Only in this case it’s characters played by Rick Sanchez’ family who are on a quest to investigate the Lost Dungeon of Rickedness. Unlike the Lost Mine, though, there’s a very specific purpose which we’ll get into later. For now let’s talk about the ruleset. 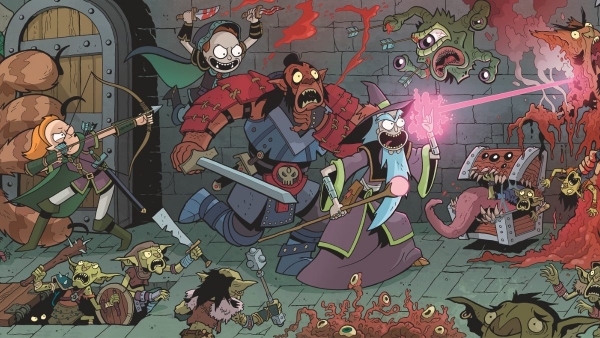 Much has been said already about how the whole box is written “from Rick’s perspective,” which can mean a whole bunch of different things. But in this specific instance, it means you’ll get the same basic streamlined ruleset you might in another box, only the rules for playing the game have been appended with commentary from Rick. Sometimes it’s great: 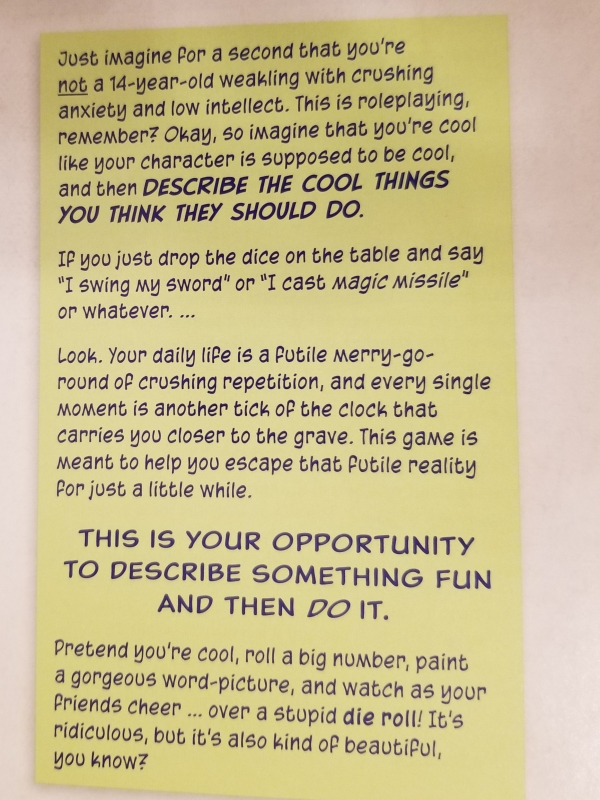 Other times, it’s going out of its way to express that Rick is a jerk and would DM like a jerk. And while it fits the character, I think the ones that landed best for me are when Rick is still being an acerbic a-hole but is giving advice that’s ultimately positive. Much like the show and it’s frequent attempts to point out that cynicism doesn’t really make you as smart as you think, these bits of colorful advice could very easily be taken seriously instead of as satire. 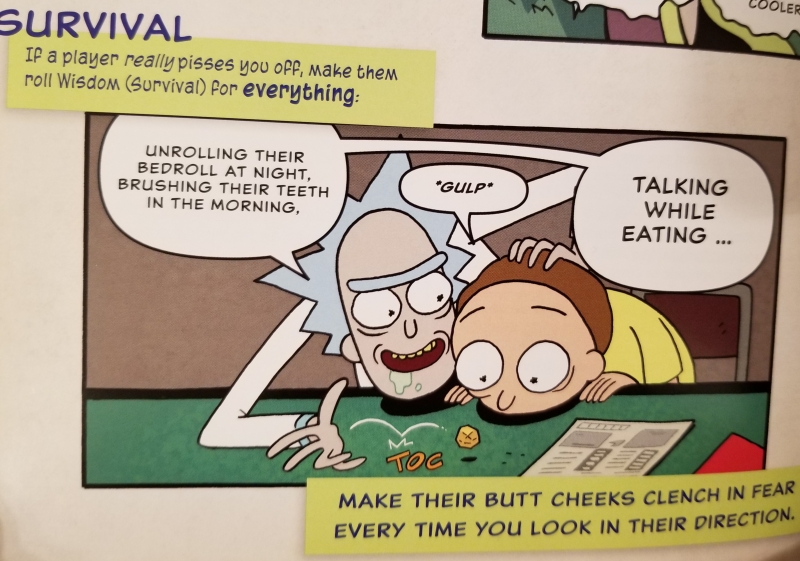 Which isn’t necessarily the fault of the adventure, but there’s something to be said for knowing your audience. And the more examples you have a best practices, the better. I do love the attitude of “you’re playing the game, this is what it’s good for, so enjoy it” instead of wasting time poking and prodding everything and trying to win. 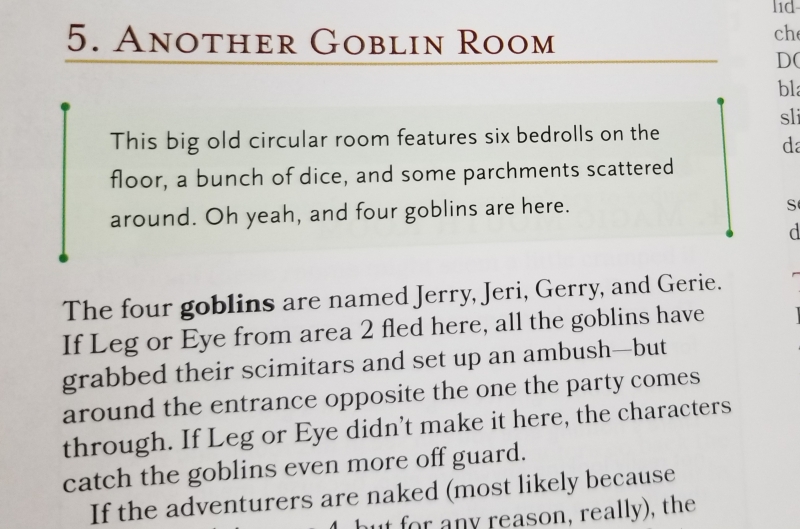 On to the included starter adventure, the Lost Dungeon of Rickedness. This one is going to be very appealing to fans of the show. If you don’t like the show, well they’ve doubled down on the references here. This adventure is written in-fiction by Rick, who in Dimension C-141 is a brilliant D&D designer, and the whole thing is full of references to the show. There’s a Meseeks Room and you’ll but there are some fun elements that might make it worth considering. I don’t want to spoil the ending, but there’s a plot twist that’s written into the adventure which takes advantage of the meta-nature of the show and was enough of a surprising turn of events that it is absolutely worth reading through it. 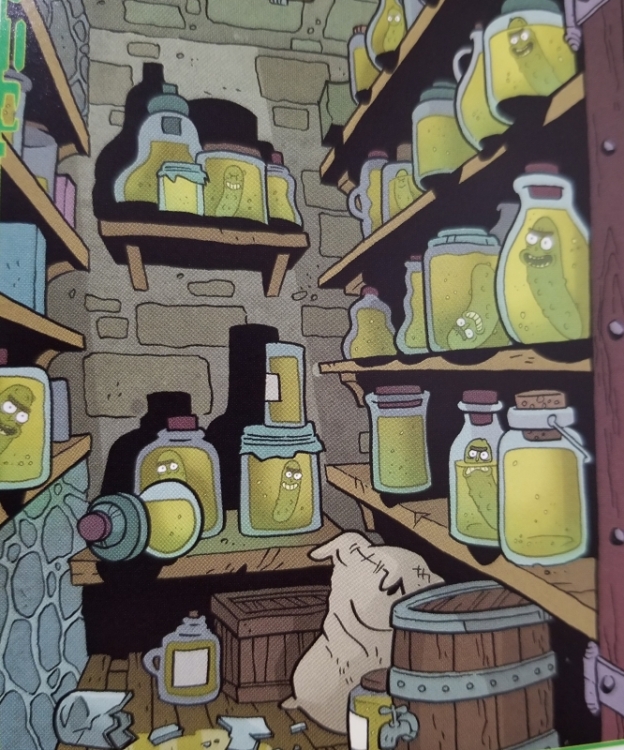 Also the Dungeon is written with varying degrees of humor in mind. Whether or not it lands is a matter of your own personal taste. Some of the jokes work, others feel a little forced to me, but that’s all subjective. What I do want to point out is that this adventure is freeing in a way. It explicitly does not take itself seriously, and because it doesn’t, it feels like there’s a big relief of pressure. It doesn’t have to succeed as a “typical D&D adventure.” It doesn’t have to have the same tone or the same weight. Compare to something like the Lost Mine of Phandelver or the Dragon of Icespire Peak, who are tasked with giving players a glimpse into D&D. They all have the same generally serious tone, and that restricts the design in a few ways.

The Lost Dungeon of Rickedness doesn’t have to be perfect, and because of that, it gets to experiment. It gets to be playful, and you can really feel where the actual writers of the adventure are letting their creativity shine through. I think because it doesn’t have to be serious, and because the authors can be less precious, you’ll find ideas that feel a lot more fun–and maybe even more interesting if you’re a veteran of the game. 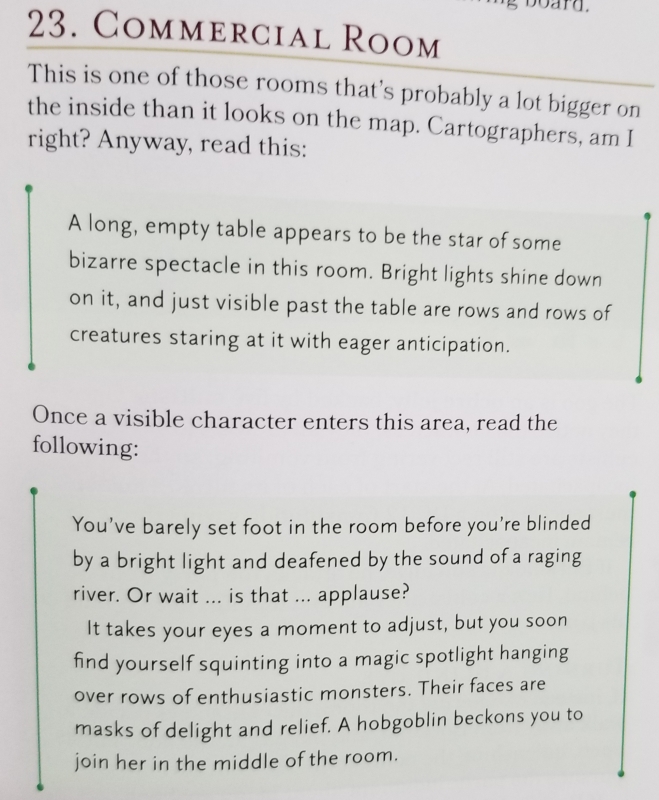 Take the Writer’s Room, listed above. It’s a very meta-moment, where the party comes up against a writer who is desperately trying to finish writing the description for the room. In response to the characters entering the room, she changes its shape and size and fills it with various obstacles. Like I said, there’s a lot of meta gameplay in here. But it works. You might have characters lose their butts, encounter a hobgoblin trying to sell items to a commercial studio audience, encounter an animatronic jug band, or even be hailed as a messiah by a cult. 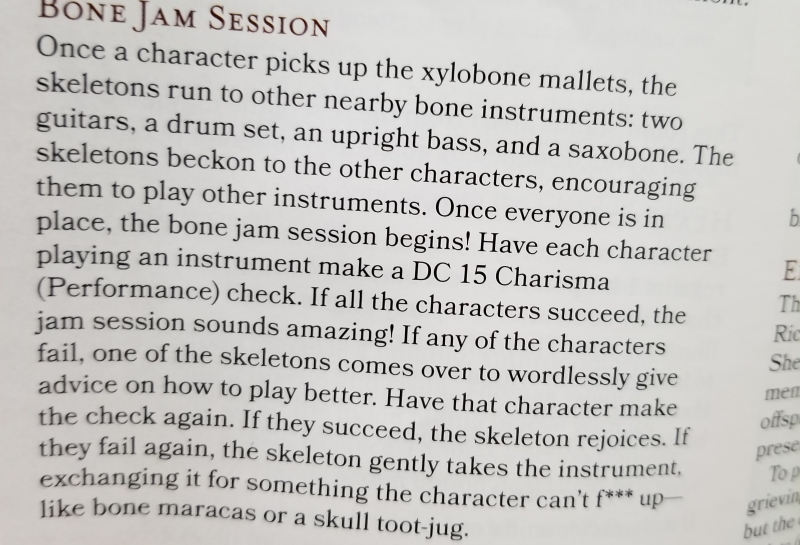 This is a fantastic place for newer DMs or DMs who have never tried another system besides D&D to branch out and try a different style of encounters. There’s a lot of versatility on display in this dungeon. Characters who have social skills have things to do, typical dungeoneering stuff has a role to play, there’s an encounter for just about every style of play in here.

And then of course there’s the end of the adventure, which, again we won’t spoil here. At least not yet. If this all sounds appealing to you, it’s definitely worth checking out. It’s not your typical D&D adventure, but if you don’t like Rick and Morty there’s not much here for you. If you want your games to have a more serious tone, then again, you’ll want elsewhere. This set plays fast and loose, but if that’s something you feel might inject a little life around your table, then check out Dungeons & Dragons vs. Rick and Morty.

Author: J.R. Zambrano
Bell of Lost Souls Staff Writer and DM, J.R. covers RPGs of all stripes and on occasion eats sandwiches. You can ask him about either at [email protected]
Advertisement
Dungeons & Dragons Movies and TV Review Rick & Morty RPGs Tabletop News Wizards of the Coast
Advertisement 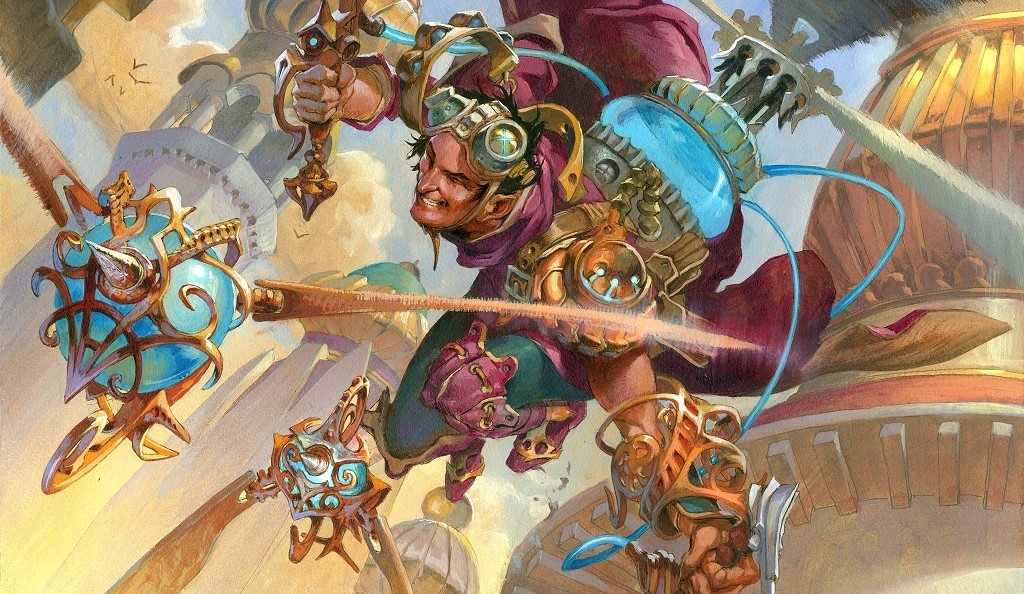