Let’s take a look at the new Nadiri Starhawk for Star Wars Armada.

FFG has finally released a preview for the Rebellion’s new heavy hitter, the Nadiri Starhawk. This ship is the most powerful ship in the Rebel fleet, and indeed the most powerful non SSD ship in the game (though we will see how the new Onegar SD stacks up soon). It’s a powerful addition to the Rebel fleet, and visually a nice touch , breaking with the Mon Cal design hegemony the Rebel large ships have suffered under. Let’s dig into what the ship has to offer.

A Powerhouse of A Ship 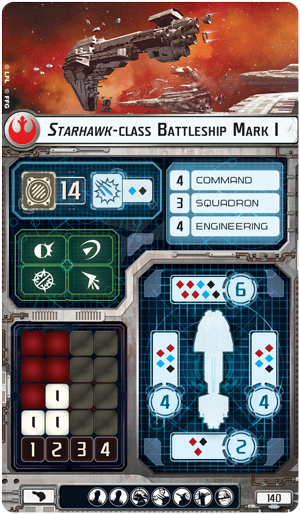 Just at first glance the Starhawk is a powerful ship, outclassing an ISD in most aspects. The ship comes in two versions, the Mark I and Mark II, but unlike many other ships the versions don’t really fill different roles. Indeed the only noticeable change is that the Mark II switches one black die on each facing for a blue die, and swaps a black anti-squadron die for a red one. The upgrade bar and all other aspects remain the same. So overall the Mark I is slightly better at close range, and the Mark II slightly better at long range, but the lack of any ordnance upgrade slot means the Mark I can’t really take advantage of black dice. 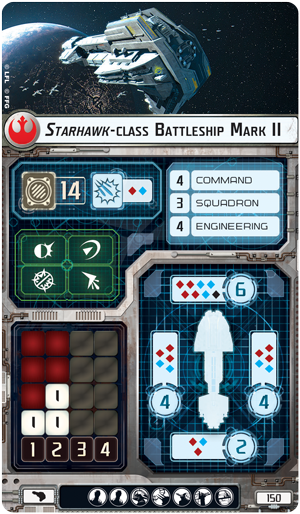 Stats wise this thing is pretty beastly. It’s got a forward armament to rival ISDII, better side armament and a similar rear. It’s got 14 hull, 3 more than a base ISD and heavy shielding, coupled with the defense tokens you’d want. She’s not going to be easy to take down. Good Engineering and squadron values also help, on the down side high command and lackluster and slow nav bar mean you will need skill to fly her. Lastly the ship has a great upgrade bar, that looks to make it into a real killer. Two officer slots allow for some great combos. The ship also gets Weapon Teams, Offensive Retrofit, Turbolaser and Ion Cannons, meaning you can take the ever popular leading shots/gunnery team combo, or do you own thing. Lastly you’ve got the new Superweapon upgrade, which I will talk about later.

The Starhawk also comes with a new defense token type, Salvo.  This basically lets you take a retaliatory strike back at an enemy using either your rear armament or anti-squadron armament. There seem to be a lot of restrictions on this attack and how you can modify it, and its not clear if it works if the enemy attack kills you, so you may not be able to use a lot of combos with it,but its still a nice extra kicker. I think it’s going to be really useful to help the Starhawk when it’s getting swarmed by a lot of little enemy ships, suddenly them all throwing 3 dice at you isn’t as great when you get to throw three dice back each time. 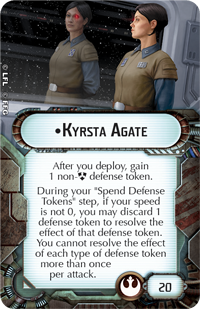 The new Admiral, Kyrsta Agate allows you to gain an extra defense token and spend them even when you normally wouldn’t be able too. Unfortunately she only seems to work on the ships shes on, and as such doesn’t provide a fleet wide bonus. While shes not my favorite, shes cheap and I can see some builds where you might want her. In particular a low ship count build, say a souped up Starhawk, max squadrons and one flotilla, could make use of her. 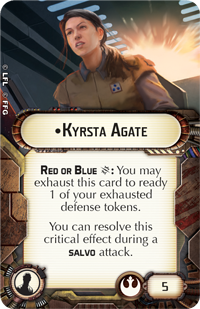 Agate also comes as an officer upgrade, and I like this version a lot more. She lets you spend crits to ready your defense tokens, which can come in really handy. In particular you can do this during a Salvo attack, allowing you to ready the Salvo token again and keep shooting back. 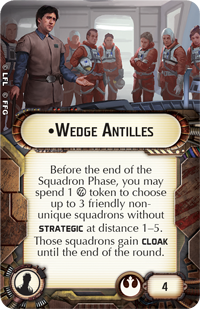 Fan favorite Wedge is back, this time as an officer card. He allows you to give friendly squadrons Cloak. This can be useful either just for extra movement or to help bombers break through an enemy fighter screen and hit their big ships. He seems like a solid invest for a bomber heavy list. 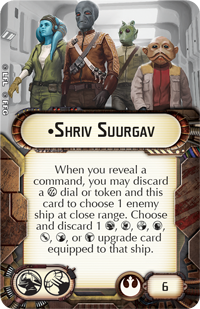 Shriv Suurgav is another Rebel card designed to mess with enemy ships. He’s got the pretty cool ability to take up one enemy upgrade card of pretty much any type. This can be a real game changer against big enemy ships, breaking up a powerful combo or simply removing Gunnery Teams. Now I don’t think Shriv is a great fit for the Starhwak; it’s too slow to use him well, and you’re likely better off taking gunnery teams. But I think he’s a great choice on a Hammerhead to run in and cause havok. 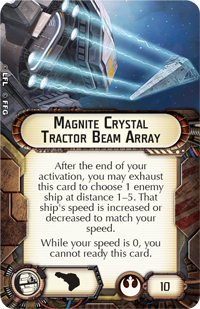 The Magnite Crystal Tractor Beam Array is the Starhawk unique super weapon upgrade. This thing is pretty interesting as it allows you to hit an enemy ship, at up to range 5, and force them to match speed with you, even taking them down to speed zero. I think the obvious goal here is to try to knock an enemy ship to speed zero, where they can’t use defense tokens. The Starhawk meanwhile has ways of using tokens at Speed 0, so that ends up being a big advantage to them. The downside here is to pull that off you really want to go last one round and then first the next, which given the cost of the Starhawk, wont be easy. Still being able to tag enemy ships far away and slow them down is pretty good, even if it comes at a high cost. 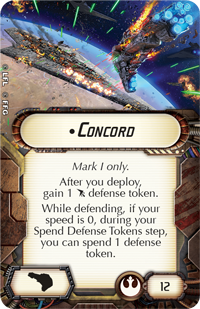 Concord is the first of the Starhawk titles, and can only be used on a Mark I version. At 12 points it’s costly, but has a big effect. First off you gain an extra salvo token, note with Agate as Admiral, this could give you up to 3 Salvo tokens. This is really an upgrade to pair with the Magnite Tractor Beam, as you can sit at speed 0 and still use tokens. Conversely it is great to counter squadrons, give your ship quad lasers and each time a squadron shots you, you can shoot them back twice, and then still pull a powerful anti-squadron attack. 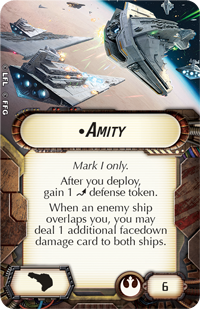 Amity is another Mark I only title. This title gives you a evasion defense token and makes your rams do double damage to both you and the enemy. This seems made to combo with Harden Bulkheads to deal two damage to enemy ships,while only taking one. I also wonder if you can combo the evasion token, with Officer Agate and Turbolaser Reroute Circuits for some kind of infite refresh loop? 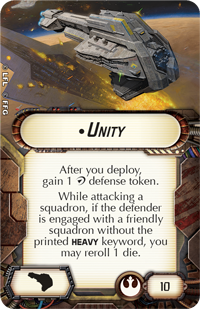 Lastly we have Unity the only title that works on Mark I and Mark II ships. This upgrade gives you an extra redirect defense token, which given how many shields the ship has is pretty rad. In addition it makes your anti-squadron attacks better if you’ve got a fighter screen of your own. This is another nice buff for an already powerful ship.

Let us know what you think of the Starhawk, down in the comments!