In the last 10 years Games Workshop has put out a LOT of miniatures. Here’s the best and most important of them.

In any list with so many choices you have to start to set down metrics that let you filter things down. Ten years ago, we were happily playing Warhammer Fantasy 8th and Warhammer 40,000 5th Edition. What a decade it would turn out to be.

We selected our miniatures across the decade, so we had a decent spread across the years. GW’s tech has improved, so the importance and quality of the miniatures has to be seen in context of when they were produced. Next we selected on individual notability and technical quality. We finally added in any “special value” that the mini may have had for the game system it was part of in general. I can’t believe it’s been almost 7 years! The Imperial Knight shook Warhammer 40,000 like no other miniature in the decade. GW reached way, way back into EPIC from the 1990s, and brought forth a giant machine of a size that type (huge walker) the game had never seen. Overnight what 40K fundamentally was about changed forever. No more was it a game about handfuls of infantry and the occasional tank clashing. The Imperial Knight redefined what a low model-count army could be, what other armies had to be prepared to defeat, and the game moved into unseen territory. It was also a technical marvel and beautiful.

This model blew away everyone when it arrived. Warhammer Fantasy was on it’s last gasps but no one was paying attention when the new model arrived. It was a massive kit (especially for Fantasy), loaded with detail, and was such a sharp transition from the original Nagash model it could cause whiplash. We didn’t know it then, but Nagash started a new size and aesthetic library for death and “big models” in general that would carry on into Age of Sigmar. 5 years on and the miniature still impresses on the tabletop. Also MASSIVE hat! 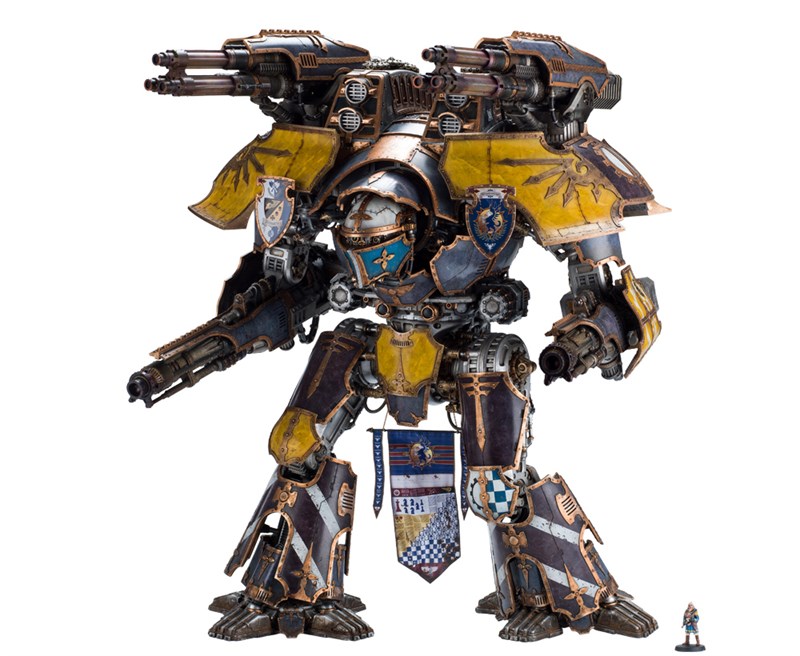 Sometimes size does matter. Forge World had previously done some really large models before such as the Imperial Fortress Walls, and the Manta, but with the every growing Imperial titan range – everyone know that it was only a matter of time until the Warlord arrived. It is still the high water mark for both size, complexity, total detail, both external and interior, as well as price. It is a technical marvel and designwise a worthy successor that looks amazing while still keeping the subtle hallmarks of the original EPIC “beetleback” Warlords that started it all. If you want to impress in this hobby – there is still no better way than to pull out your fully painted Warlord and plunk it down on the table.

Like Nagash, the difference between the old Archaon on horse from Warhammer Fantasy and the new model leading the charge for Chaos in a brand new Age of Sigmar was shocking.  The model is enormous dwarfing even the Bloodthirster, and still sets a high bar for “centerpiece” models in the Mortal Realms. GW really went all out with the sculpting and posing of the kit. It is almost levitating off its base, an impressive feat for such a large model. You can see little hints of the dramatic diorama details like the circling birds that would lead to more dramatic “moment in time” models to come down the road.

The Daemon Primarch of the Death Guard kicked off early 8th Edition with a fetid bang. His model is large, imposing, and brings some of that Age of Sigmar “pizaaz” to the Grimdark. Technically the model is far superior to the previous Magnus model, an is loaded with detail, built options, ambitious “floating” posing, and that modern GW “fits together like black magic” assembly.  It’s a model that you can show off to newcomers and get that jaw on the floor reaction every time.

It’s not the biggest, or technically most impressive mini of the decade – but the humble Intercessor stands for change, and surely represents a 30 year old changing of the guard for Warhammer 40,000. It will be delightful to see where his line leads in the years ahead.

~We can’t wait to see what the 2020s will bring! Which of these do you think is most worthy, or did we miss one?