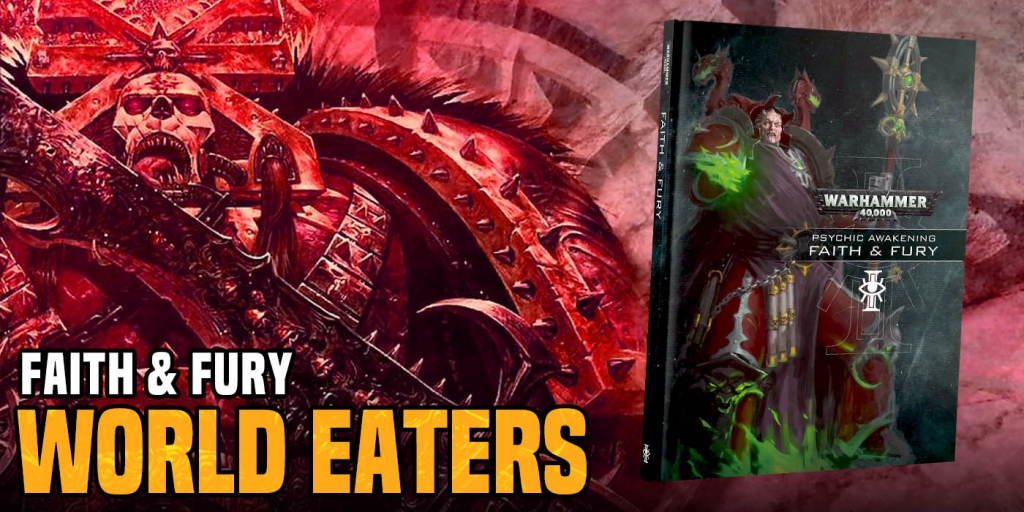 Advertisement
Today, we are looking at the newest goodness that our mighty lord Khorne has brought to us: the new rules for World Eaters from Psychic Awakening!  Hey everyone, Danny from TFG radio here. If life gives you lemons, blood for the blood god, after all. Today, I am going to break down Warlord Traits and Relics to give you a bit of the ol’ in depth look at how you may want to use these in your armies of unreasonably, earthshatteringly mad heretics.

These of course go to our brave leaders, and I’ve ranked them from my favorite to my least favorite.  Again, this is more competitively minded, so I am looking at traits that maximize efficiency, either by making other units better at what they do or turning a character into an ungodly murder-machine. This is the one WL trait that a lot of people will take for obvious reasons.  If you are trying to go with a full-on World Eater rush, whether that be hordes of Berserkers or Red Butcher Terminators dropping in from reserve, this is essential.  Just the +1 adds about 14% more likelihood of sticking the charge out of reserve, and if you throw in the reroll for Icon of Wrath, you are looking at sticking the 8 inch charge out of reserve of about 66%. To put that into context, with this WL trait, a unit of Berserkers out of a Termite Drill or Terminators dropping out of reserve go from a less than 1 out of 2 chance to stick the charge to about 2 out of 3 sticking the charge.  That’s some damn nice value for a Warlord Trait. You can also combo this with other, lesser seen units like Warp Talons for some nice anti-overwatch tek to help you in the T’au/Iron Hands matchup. Even just a minimum unit of Warp Talons can save you a whole squad or two, so treat them like an investment. To really make use of this, A jumppack or Terminator Lord is key as you need to be able to deepstrike alongside the charging unit to get them in range, but if doing a foot horde, even the extra +1 to advance can add up to whatever survives to charge the next turn. This is a lot of extra efficiency to be sure as rerolling all wounds is rare nowadays, so there is some play here.  The problem is that it is again matchup dependent.  We are in a vehicle heavier meta than before, so this can pop off pretty well. A Disco-Lord that is going vehicle hunting loves this as does a Daemon Prince or Smashcap that is flyer hunting.  Getting a Disciple of Khorne Disco-Lord into a vehicle means a pretty dead vehicle. That said, I think it is best on a Smashcap or DP in general as it pretty much gives you a dead flyer in a single round, so using the Disciple like a linebacker can give you good counter-charge threat, and since a lot of World Eater units can’t do much to flyers, it is a good idea to have something in your list that can take them out in a single volley (or two sometimes with Fight Again and bad model positioning).

This isn’t too bad on a missile-style character where you plan to send them unsupported as an early piece-trade model, but that is giving up an easy Warlord kill, so it could do work, but you have to balance this out with the fact that you are giving your opponent a good reason to take Old School against you. That said, a Thunder Hammer smashcap with +d3 attacks is not ever a bad thing. This is a great way to get an early first turn kill if stacked with certain stratagems as a Gorefather/Berserker glaive smashcap with Arch-Slaughter is going to absolutely murder any forward squads like Infiltrators. This is a tricksy one that rewards smart model placement, and really, it is about laying a trap for your opponent.  Extra movement is always useful, and so this is a great way to get a DP or a Chaos Lord into combat and putting in work, especially against fast assault armies that are going to try and hit your lines early. If this is on a Jump Lord or a Winged DP, this is also a good way to catch enemy flyers that try to swing around your lines. Is it better than any of the others above it? No, not particularly. This is cool, but it is limited in terms of its utility. Taking half damage from say Stomps or any other d3 damage weapon is good, but this isn’t that much more survivability for a Chaos Lord, and most Discos die in the shooting phase.  This can make a DP a lot more resilient as they can typically avoid being shot, and the half damage makes them a bit tankier against other melee threats.  Is this better than Disciple of Khorne or violent Urgency? No. That said, if you manage to get a DP into the mid to late game, it can be pretty damn difficult to take down when d3 weapons only do 1 damage 67% of the time. This is not all that exciting as it is very match-up dependent. Yes, a Daemon Prince or Lord-Discordant getting a bunch more Strength and Attacks seems great, but this relies in your opponent feeding you characters or monsters, and you surviving to make use of it.

Again, I am ranking these in order of my favorite to least favorite.  I am looking for weapons or upgrades that either significantly up damage output or longevity, but cool tek is always appreciated. There are a few reasons to love this weapon.  It only costs 1 point for the Chainaxe, so a standard Chaos Lord goes up to S6 for very little investment.  Flat damage 3 is awesome for taking out tankier units, and the chance to do mortal wounds even gives you some chance to hurt hordes. If you pair this with Disciple of Khorne, you get a pretty strong smashcap that is 20 points cheaper than a Thunder Hammer with greater accuracy and just about the same damage potential, all things considered.  This definitely makes a great throwaway melee threat that can go get its points back and in a hurry. Even without a WL trait, this is a nice way to add a cheap melee threat on a character chassis as you are only spending 94 points for a Jump pack Lord. This another good, cheap axe that can make a Terminator Lord really annoying to handle.  Pumping up a Termie Lord to S5 with flat 2 damage is good, but the real benefit is the 5+++. With 6 wounds and a 2+/4++, this can be one tanky character, especially if you go with the Deep-Striking Violent Urgency Warlord where you can drop him in with a bunch of Termies and watch the skulls collect.  This is a good weapon to ensure that you aren’t giving up Slay the Warlord too easily in this combination. If the Lord survives the drop and can get inside a ruin or a magic-box, most out of LoS shooting won’t bother him, if they can even target him, and unless the enemy has a solid melee threat, no one is going to want to dance either. This is not a bad relic for DPs and Discos, namely because they pump out the volume of attacks to really benefit from it. A double-talon DP on the charge is going to be able to chew through most infantry, and being able to heal any chip damage makes it far more resilient as a late-gamer clearer.  A healing DP on turn 4 or 5 can be a real headache for your opponent when the game starts coming down to scattered forces, especially as the DP starts to finish off those small squads camping objectives. Combining this and the True Berserker WL trait can make a really mean late-game model that excels at clearing out a flank in the last two turns, is protected by the character rules from shooting, and is half-damage in melee that also has the chance to heal.

This is definitely more for a horde build as +1 attack is never, ever bad.  The problem is getting the Banner to where it needs to be to get maximum value, so it can be counter-played to an extent. Also, with the ubiquitous nature of Eliminators, a Dark Apostle isn’t very safe.  If you want to run just waves of Berserkers (or even standard CSM or cultists), this can get you value, but it requires a lot of forethought on where and when you want to pop it. That said, it certainly can turn off the power of several units if you position well, and getting anywhere from 10-30 more attacks out of a unit is certainly value. This is a fluffy item, and +2 strength is awesome for a powerfist and/or Thunderhammer character, but making you have to charge can be annoying. You can play around it if you are mindful, but it is definitely a chance for operator-error to come into effect.  In general, I would not spend a CP for this, and even if I was spending CP for more relics, I would not use it on this. Well, it hits hard, so that’s a thing, but yah, with only 1 shot, it is not all that spicy. World Eaters aren’t known for shooting, and there are just so many other choices that do more work (and for less points). Blood for the Blood God!