D&D: Five Monsters Due For A Comeback

Recent 5th Edition modules are bringing old school monsters back in a big way, here are five we think should be next on the comeback tour.

Although can you really call it a comeback if they’ve been here for years? Many of the monsters we’ve seen in recent adventures are hits from the old school Fiend Folio and Monstrous Compendiums, like the Tomb of Annihilation’s Al-Mi’raj and Zorbo, or Descent into Avernus’ Nupperibo and Hollyphant. With a new D&D book on the horizon, what old monsters might we see get new rules? Here are a few that we’d love to see return. 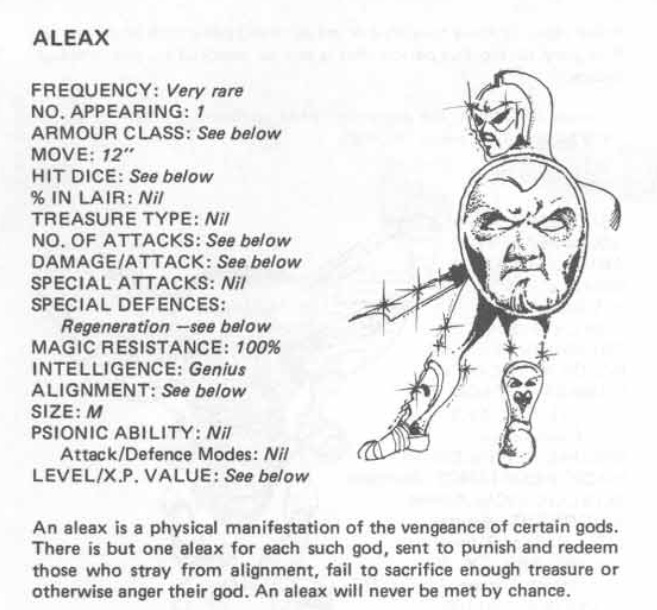 An aleax is a physical manifestation of divine vengeance. And while demons and angels and all sorts of other divine servants exist to mete out extraplanar justice, an aleax is especially fun because there’s only one for each god, and when they show up the battle is an intensely interesting one.

For one, an aleax takes a form that’s an exact mirror of their intended victim, only bathed in a light that varies according to their alignment. They are specifically invulnerable to attacks from everyone except for their chosen victim–and they’re invisible too, so there’s no interference from outside parties.

If you’re the intended target, you’re basically fighting a mirror match: the aleax has the same characteristics, hit points, armour, weapons, and so on, with one two notable exceptions. For one, the aleax regenerates after it’s wounded. The round after it’s hit, it regains 1 hit point, then 2, then 4, and so on, until it’s either killed or all hit points are restored. Once it’s back up to full health, regeneration starts again at 1 hit point.

For two, the aleax takes double damage on a natural 19, while a natural 20 deals quadruple damage.

And the end result of a fight is interesting–that’s either being transported to the realm of their deity to serve for a year and a day, or being killed and then immediately raised but losing the benefits of all their magic items. 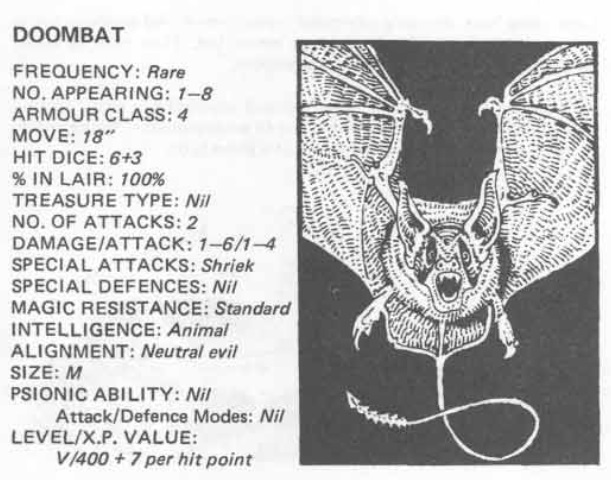 Besides having an amazing name, Doombats are giant bats that can pick up a bizarrely specific 3,000 gp worth of weight, possesses a stinging tail, deadly bite, and the ability to make a sonic screech that specifically debuffs creatures by preventing them from concentrating. This would be an interesting effect if it were brought into play with the concentration mechanics of 5th Edition–having something else that disrupts concentration, especially as a part of a monster’s actions, could be extra challenging for spellcasters.

Plus it’s called a Doombat. What more do you want? 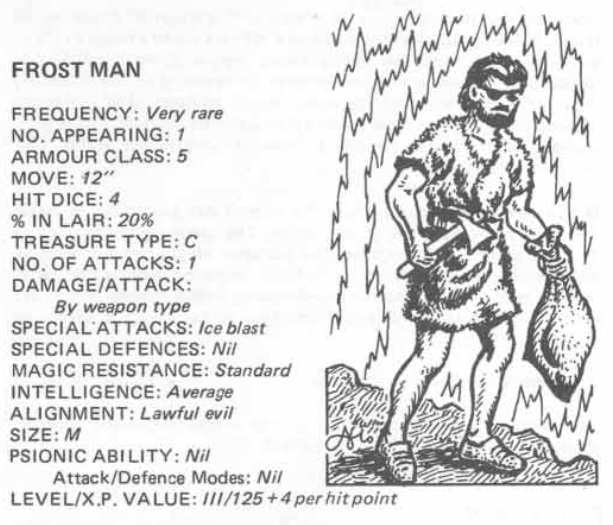 A frost man is a deadly humanoid that is infused with elemental cold magic. They dwell in the frozen north, where they are called ice demons by those that fear their inborn power. Frost men are capable of radiating a frozen cone of ice mist from one eye, and radiate cold in a 30 foot aura around them at all time.

These mysterious humanoids tend towards evil, but since they can take up PC classes pretty well, they’d make for an interesting player option, or for a particularly powerful frozen foe at the end of an adventure. 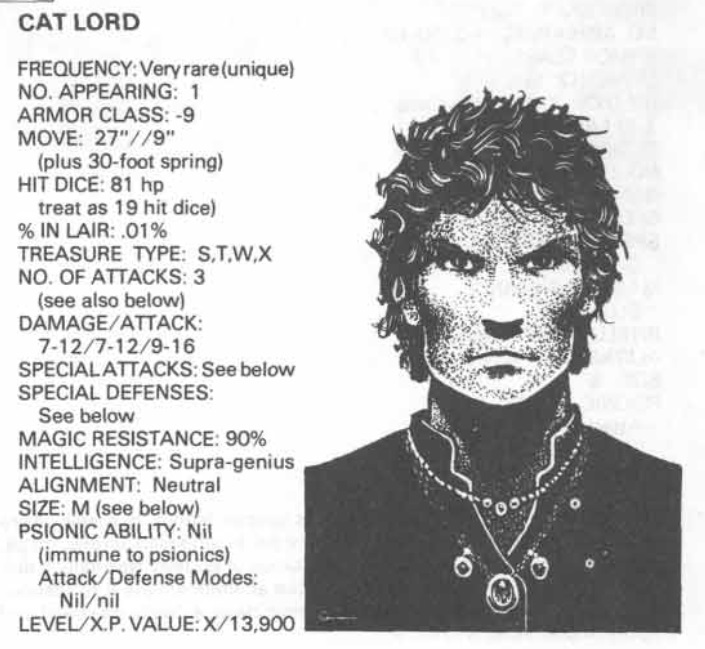 The cat lord, or master cat, is the rule of all forms of felines from domestic cats to giant lynxes to the largest of smilodons. If that isn’t reason enough to bring back this mysterious creature that some believe to be a minor deity, but others believe to be a minor evil power, then let the rest of what the cat lord is capable of convince you. 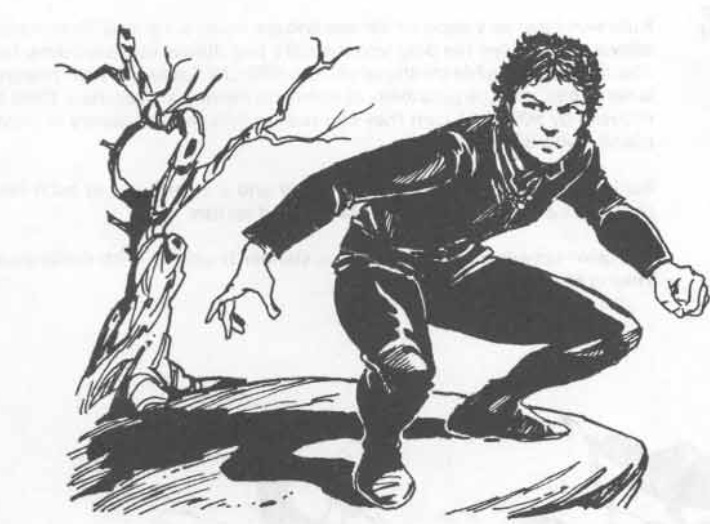 Like most cats, they are neither good nor evil, but is concerned with “cat-things alone.” The cat lord roams the Prime Material, Astral, and Ethereal planes, and appears in human form with incredibly high statistics and has a mastery of all cats. They are capable of summoning cats as well as appearing in the form of a human or a cat. In feline form, the master cat can summon other felines at will, while the cat lord’s human form lets it move rapidly and spring in massive 30 foot leaps in any direction, ready for whatever comes next.

If you thought the rest of the monster entry would be a bunch of cat references, you’d be right, including the bit about licking wounds and having nine lives. 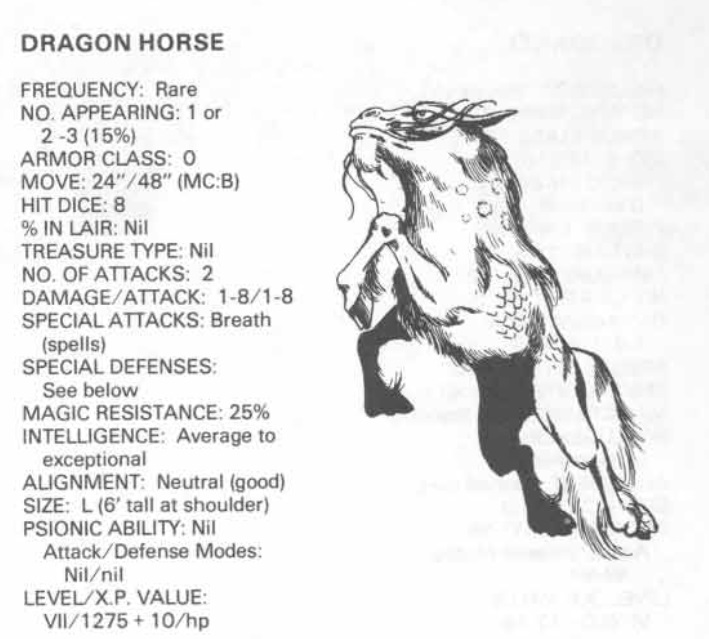 I mean, it’s called a dragon horse, if you don’t understand why that would be an awesome monster/mount then I don’t know what to tell you, other than these are skydwelling horses that some speculate are related to ki-rin. They roam the air, flying free and enjoying the currents of the wind wherever they roam.

Most cretures leave them alone because they employ a variety of breath weapons at will, including a fog cloud, gust of wind, or a miniaturized cone of cold. But they can also detect alignment and magical auras, and sense emotions and auras at range. They can also plane shift, travelling to the Astral and Ethereal planes in order to visit the Plane of Air or more otherworldly locations.

There you have it. Five classic monsters due for a little comeback. What classic monster would you like to see come back? Let us know in the comments, and as always, happy adventuring! 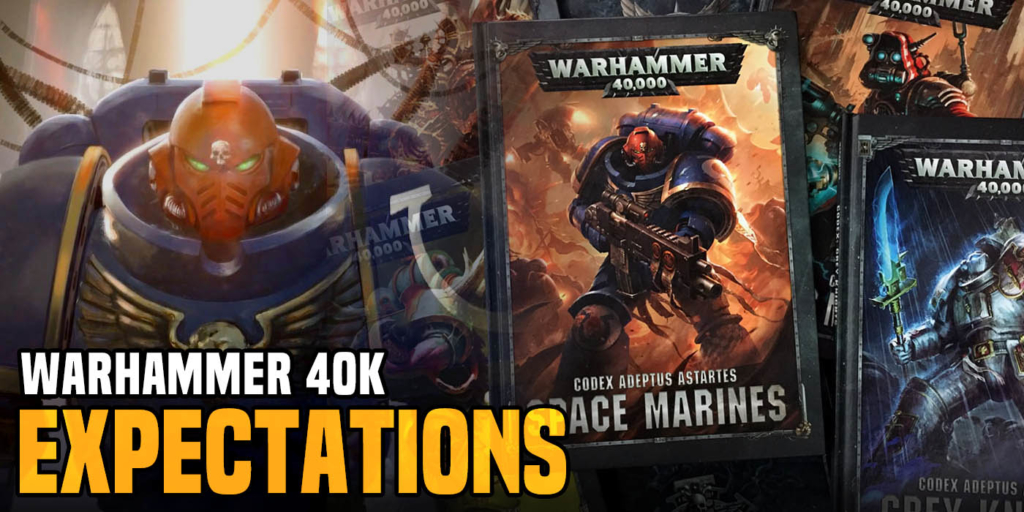