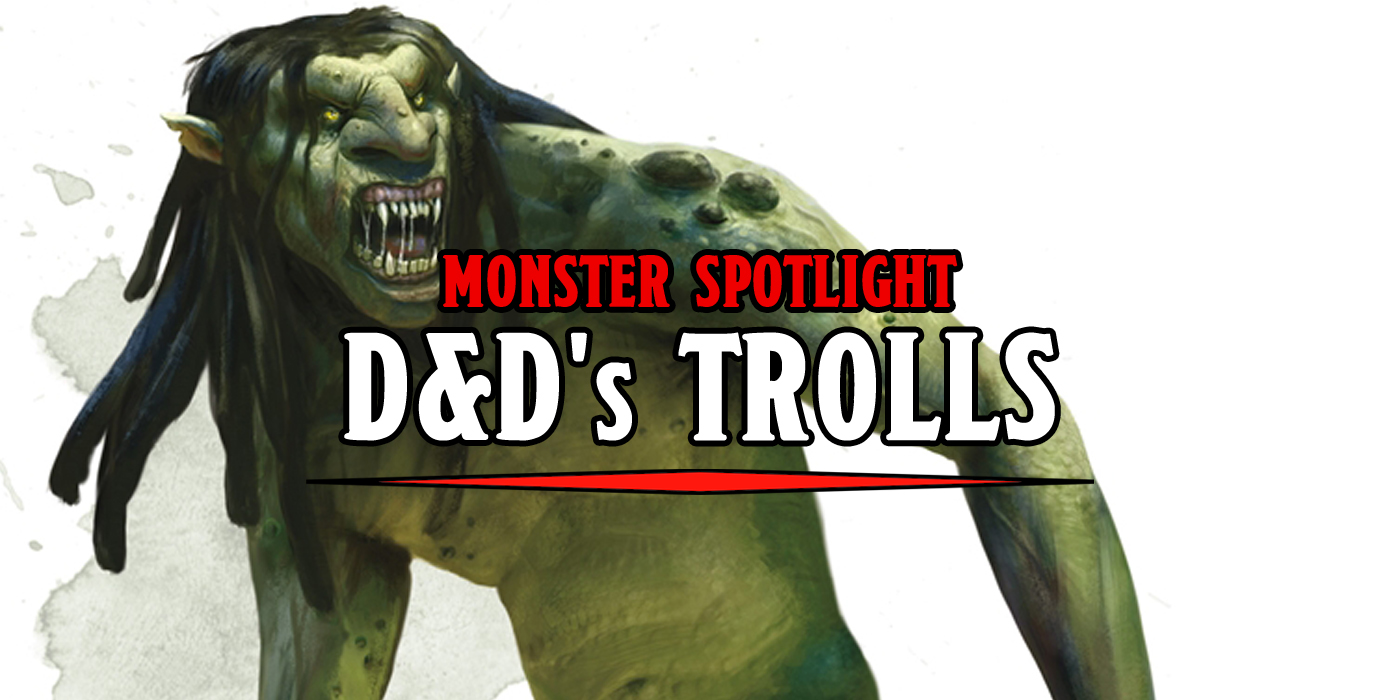 Today we’ll take a look at one of the most iconic fantasy monsters; trolls.

Trolls are an ancient and infamous part of D&D and fantasy in general. Today we’ll take a look at how they’ve evolved through time and what an in-game encounter with one may look like.

Historically, trolls first appeared in Norse and Scandinavian folklore with a ton of variety existing between the different myths. Sometimes living alone, other times in family units. Some were vaguely human-like, in other stories they’re slow-witted and lumbering. The standard D&D troll that you’re probably familiar with also has a history in the classics, but took much of their inspiration from Three Hearts and Three Lions, a 1961 fantasy novel by Poul Anderson which features trolls who can regenerate much like the D&D foe you know and love. 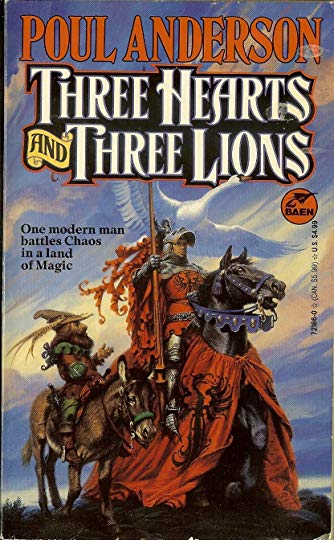 Three Hearts and Three Lions is also where much of D&D’s ideas around Law and Chaos come from, and in a way is responsible for the shackles of alignment that have plagued arguments about what a Paladin would and wouldn’t do for decades now–but it also features a Danish engineer killing a bunch of Nazis with a magic sword, so we’ll give it a pass. Anyway, back to the trolls!

Trolls are large creatures, usually about one and a half times the size of a human with long arms, rubbery skin with moss green or gray hair. In some editions, they look more monstrous with an uneven gait, a forward-leaning hunch, and their arms dragging. In others–Orcs of Thar, for example–trolls can be designed as a playable race or NPC, their high strength, dexterity, and constitution and low everything else making them a great big tank of a character. 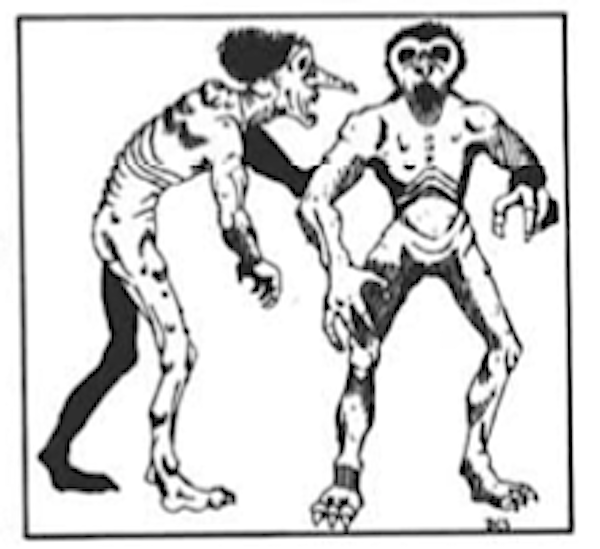 Even from first edition, trolls could be very interesting foes to fight. Their low armor class and unimpressive hit points were easy enough to fight through, but their regenerative abilities made them slightly more of a challenge. Trolls were monsters that required to be destroyed entirely with either fire or acid or else they would begin to regenerate and attack again. While this trick could be easily figured out by the players, the learning curve at the beginning of a campaign promised to make for a fun encounter. 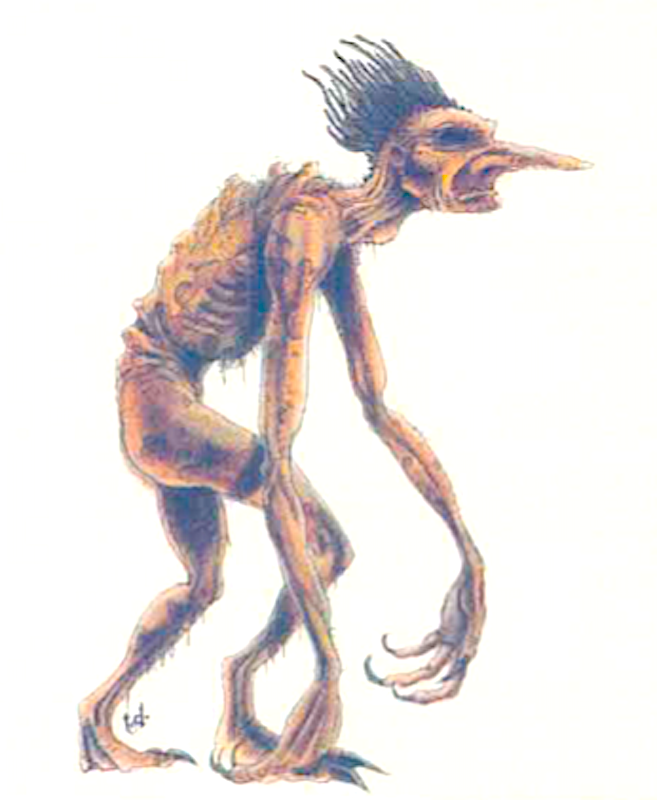 In second edition severed troll limbs could continue to fight on their own in addition to the trolls’ normal regenerative abilities. This was also the edition where some more of the troll background and life structure was fleshed out such as their female lead society and lack of a language of their own. Whether the paragraphs of information was useful in gameplay or just flavor text for the DM isn’t clear to me, but it’s clear this was when trolls as a foe began to come into their own. 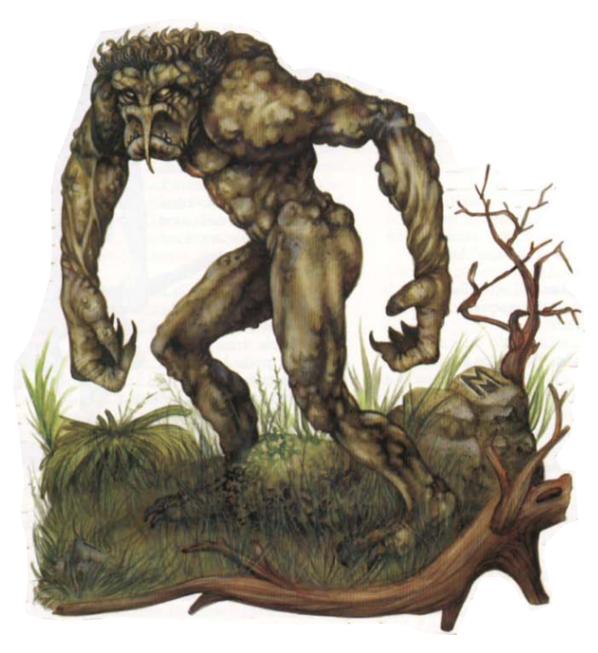 By three and 3.5, the rules regarding destroying trolls with fire or acid become more technical, focusing on how much damage different attacks would do and the technicalities of regeneration. However, third also introduces the concept of the Troll Hunter, a troll who hunts “civilized beings” as a ranger might and uses some typical ranger spells. This is also one of the first places where stats for a troll as a playable character start to appear. 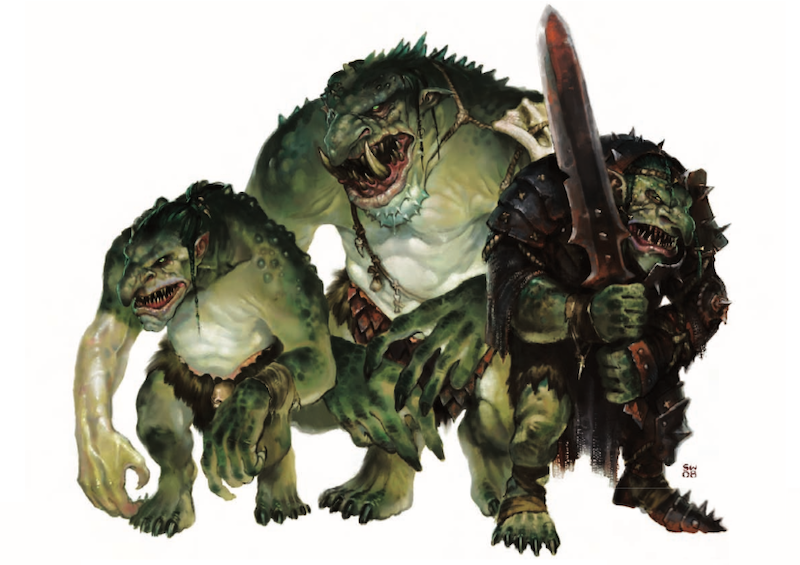 Fourth edition once again shakes up the basics of how to use a troll in an encounter while keeping the core concepts more or less the same. Trolls still heal and regenerate with a weakness to acid or fire, but now being reduced to zero hit points by an attack not using acid or fire will result in the troll rising to fight once more. Fourth is also where War Trolls and Fell Trolls are introduced, more powerful variants on their more standard brethren for more experienced parties. 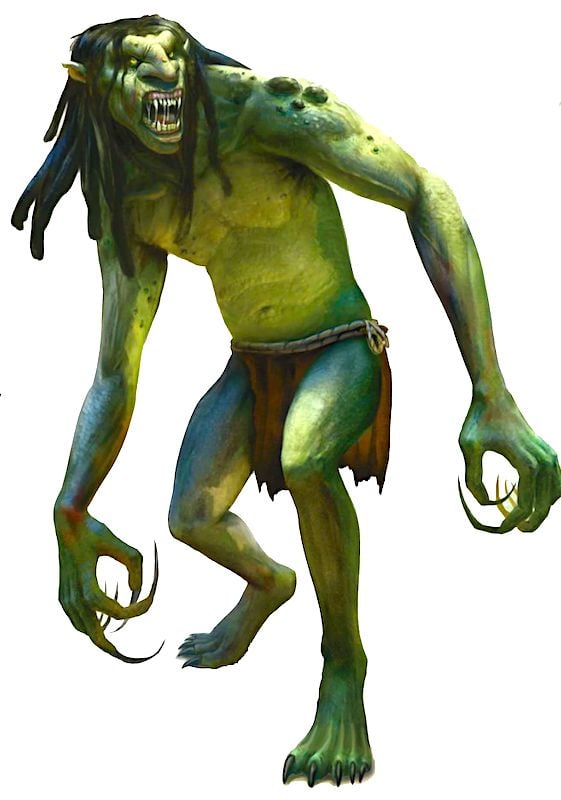 Finally, fifth edition simplifies trolls again, making regeneration a constant threat during every new round of combat but removing the entire concept of killing the foe only to have it come back to life. They do, however, give us the Loathsome Limbs variant. This gives hard and fast rules to severed troll limbs attacking on their own and makes a troll so much more interesting and entertaining to engage in an encounter with. I think this variant elevates them from a generic big monster to something much more fun and depending on how your GM runs your game, it could create a more cinematic and fantastical experience.

Trolls are fun and iconic, stepping out of historic folklore and into modern fantasy with variants and updates that keep them interesting and somehow entirely recognizable. They can be a learning experience first encounter for your level one babies or a truly interesting and multifaceted battle for the more experienced adventurers.