It the first LCG Packs of the New Year. Arkham Horror, A Game of Thrones, and Lord of the Rings – get in here! 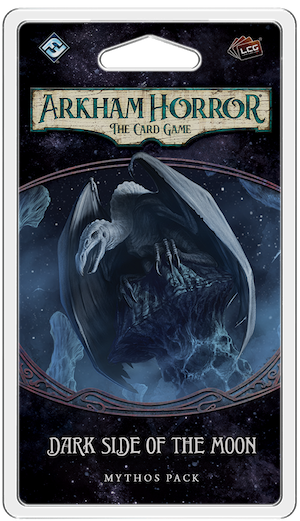 Embark on a dangerous rescue mission in Dark Side of the Moon, the third Mythos Pack in The Dream-Eaters cycle for Arkham Horror: The Card Game! After the man who may hold the key to escaping the Dreamlands is taken by dangerous Corsairs, you follow to a dead world where danger is waiting around around every corner.

Dark Side of the Moon is Scenario 3–A of “The Dream-Quest” campaign. This scenario can be played on its own in Standalone Mode or combined with the other expansions in The Dream- Eaters cycle to form a larger four-part or eight-part campaign. After the events of The Search for Kadath, the investigators in the Dreamlands are drawn even further from the world of the waking than they could have ever thought when Virgil Gray is taken to the cold, distant moon and you have no choice but to follow in the hopes of rescuing him. The silence of the place is deafening. There is no wind whistling through the air, no chirping of birds, no idle sound of any kind. And around every corner, some maddening creature is keeping a close watch over their domain. You must remain even quieter in order to stay hidden long enough to find Virgil and escape without raising the alarm. 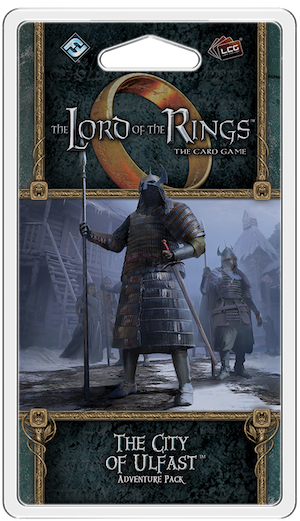 The City of Ulfast is the second Adventure Pack in the Vengeance of Mordor cycle for The Lord of the Rings: The Card Game.

After bringing Mordor’s vengeance to Dorwinion in Wrath and Ruin, the vile Than Ulchor has fled to the East just as quickly as he arrrived. Now, you have tracked him to the Easterling city of Ulfast and must gather as much information about his whereabouts as you can without being detected by the ruthless City Guard.

This 60 card pack contains an entirely new scenario for players to continue the adventures they started in the A Shadow in the East deluxe expansion and the Wrath and Ruin Adventure Pack as well as new cards to help players deal with these challenges, including a new contract and a new Spirit hero. 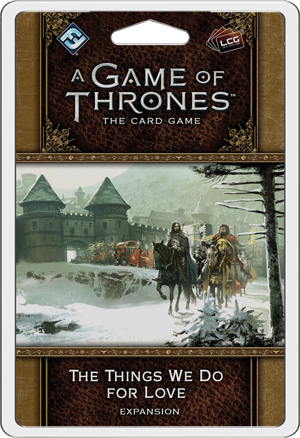 A new age of A Game of Thrones: The Card Game begins with the The Things We Do for Love! This expansion contains 88 cards that draw on the game’s rich history as both a CCG and LCG, bringing powerful and iconic cards from earlier eras of the game’s life to the second edition of the A Game of Thrones LCG. Whether it be the return of iconic characters like Mad King Aerys, or fan-favorite locations and plots, players will find plenty to be excited about.

Within this Pack you will find: