It’s all the skirmish size action you can handle for Pre-orders this week from Games Workshop! 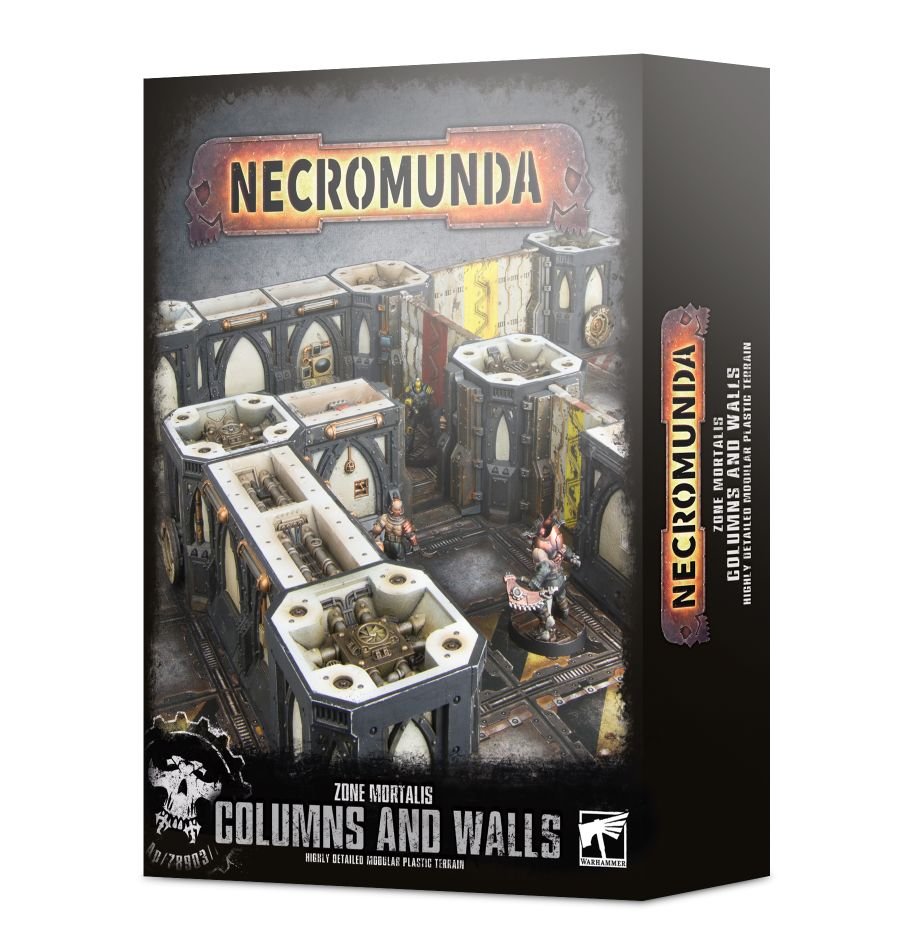 The Zone Mortalis is literally “the deadly ground” – short-range gunflights take place as fighters dart between cover and brutal melee is almost impossible to escape from.

This highly detailed plastic kit has been designed to be as interchangeable as possible, offering maximum opportunity to create different layouts. It’s fully compatible with all other Zone Mortalis kits and makes ideal terrain for games of Necromunda, Warhammer 40,000 or even Kill Team. 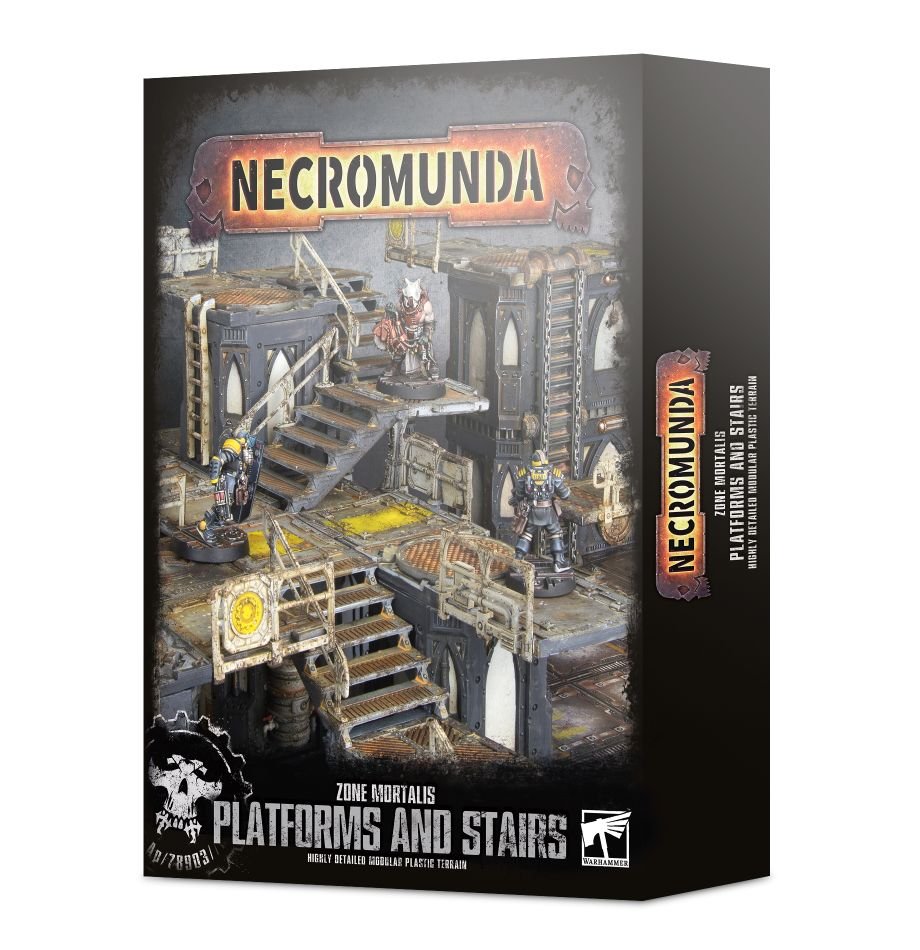 The Zone Mortalis is literally “the deadly ground” – short-range gunflights take place as fighters dart between cover and brutal melee is almost impossible to escape from.

This highly detailed plastic kit has been designed to be as interchangeable as possible offering maximum opportunity to create different layouts. It’s fully compatible with all other Zone Mortalis kits and makes ideal terrain for games of Necromunda, Warhammer 40,000 and even Kill Team. 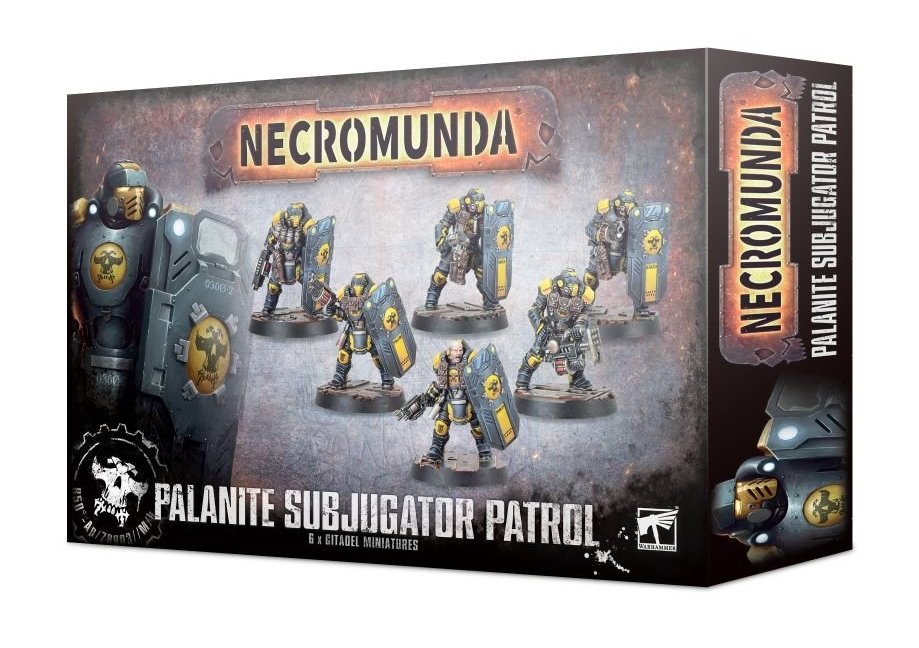 More akin to an army than a police force, the Enforcers trade in violence and control, purging settlements and habzones if even the faintest hint of sedition against Lord Helmwar’s rule is uncovered. When bigger disturbances need to be dealt with, the Subjugators are unleashed, delivering justice with extreme prejudice.

This set of six Subjugactors have been designed to provide you with a huge amount of variety and options when it comes to assembling them, ensuring that no two patrols ever need look the same. This kit is great for starting a new patrol or providing reinforcements for an existing one. The set includes options for building a Subjugator Captain, as well as an arsenal of weapons such as stub guns, shock batons, subjugation pattern grenade launchers, SLHG pattern assault rams (with built-in grenade launcher) and their instantly identifiable vigilance pattern assault shields.

Also included are six 32mm Necromunda round bases and an Enforcer Patrol Transfer Sheet so that you can finish off your models. Rules for using a Subjugator Patrol in games of Necromunda can be found in Necromunda: The Book of Justice and Necromunda: Dark Uprising. 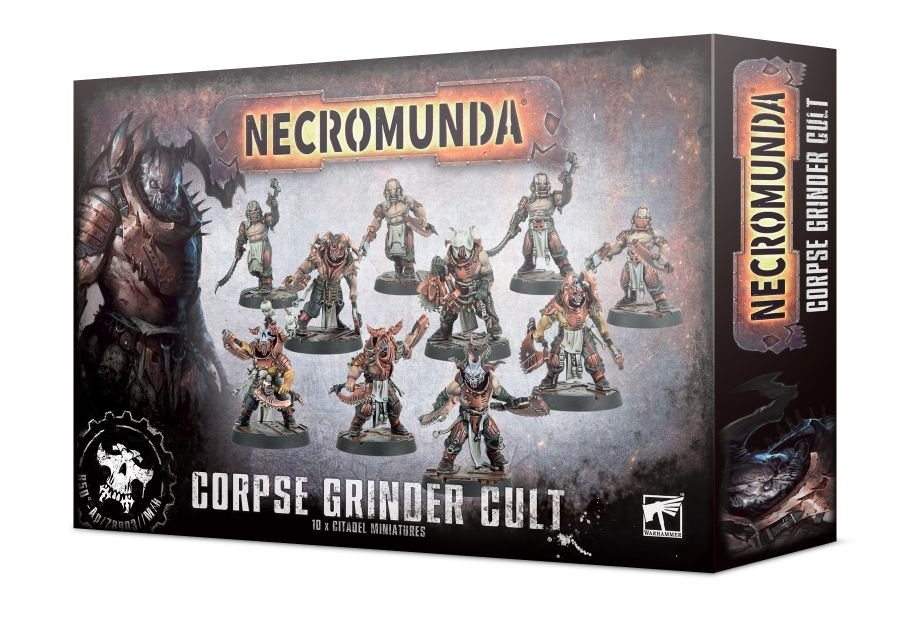 Voicing chants to the Lord of Skin and Sinew, the Corpse Grinder Cults rise up, emerging from their hidden corners of the underhive. With their bodies grown hard and muscular on a diet of forbidden flesh, they bring full-blown rebellion to Necromunda.

This set of ten Corpse Grinder Cultists have been designed to give you a huge amount of variety and options when it comes to assembling them, ensuring that no two cults need ever look the same. This kit is ideal for starting a new cult or adding to an existing one, containing 6 Skinners – including options to build a Butcher (Leader) and a Cutter (Champion) – and 4 Initiates. Butchers, Cutters and Skinners are armed with a brutal array of chain cleavers and rotary flensing saws, while Initiates have access to chain cleavers, boning swords and autopistols.

Rules for using a Corpse Grinder Cult in games of Necromunda can be found in Necromunda: The Book of Ruin and Necromunda: Dark Uprising. 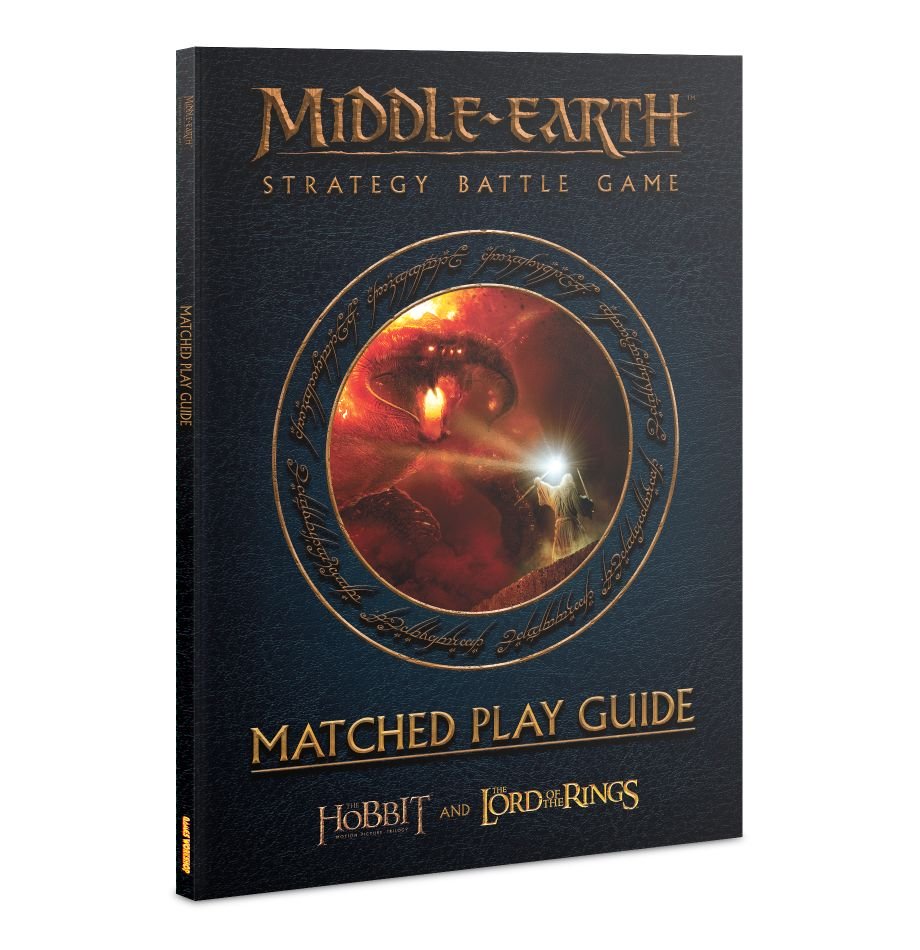 This book is an absolute must-have for players who enjoy Matched Play games of the Middle-earth Strategy Battle Game, as well as for event organisers who run Matched Play events.

– Scenario Pool System: Introduces a scenario pooling system for the game, designed to ensure that your tournament will be balanced by the type of scenarios being played.

– Matched Play Scenarios: Scenario rules for 24 Matched Play scenarios – 12 of which are new and exclusive to this book, including…​

– Doubles Event Scenarios: Advice and rules for running a Matched Play Doubles event, along with six new scenarios specifically designed for use in Doubles games.

– Campaign Events: Contains rules and advice for running Campaign events, where players are grouped by faction, and can participate as a team against the other factions at the event for control of Middle-earth!

You will need a copy of Middle-earth Strategy Battle Game rules manual in order to use the contents of this expansion. 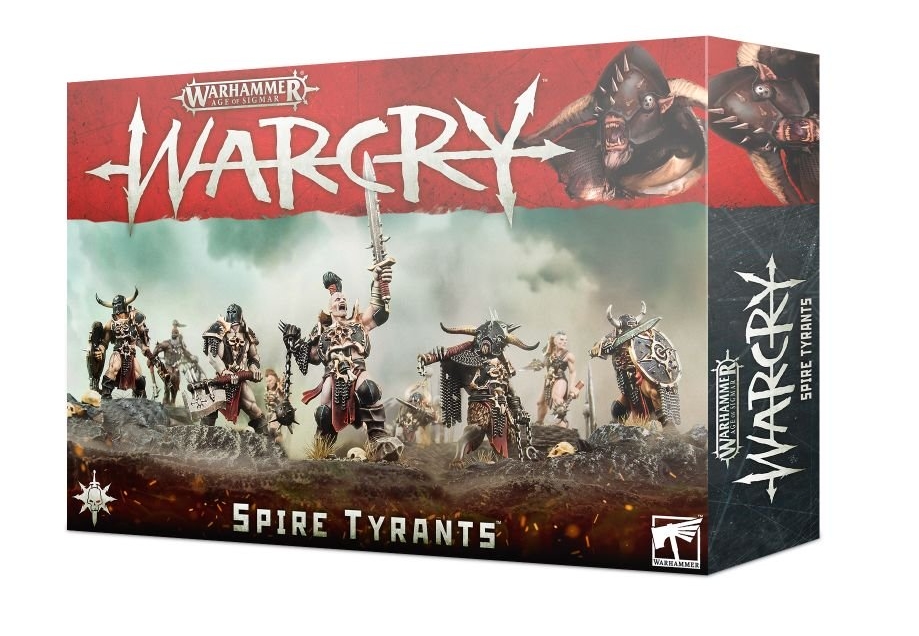 Even the blood and thunder of the arena ceases to hold any allure for the Spire Tyrants. Instead, they seek greater tests, venturing out into the lethal wilds of the Eightpoints. There they look for worthy foes and challenges, hoping to earn infamy enough to gain the favour of the Everchosen. These champions retain the names and epithets they earned in the arena. They also maintain the arrogance and showmanship that defines the greatest gladiators, favouring bloody eviscerations and decapitations over a simpler, more efficient kill. The sight of such a gruesome death can steal the nerve from even a veteran fighter.

Prove your might in the battlefields of Warcry with the Spire Tyrants! Versatile, deadly and armed to the teeth, this warband is ideal for players looking for a take-all-comers warband with plenty of dirty tricks up its sleeves. This warband set allows you to field these ruthless pit fighters in your game, containing 9 plastic Spire Tyrants miniatures – 1 Bestigor Destroyer, 1 Pit Champion, 1 Frenzied Rager, 1 Headclaimer, 1 Pit Fighter with Net, 2 Pit Veterans with Shields, 1 Pit Veteran with Shield or Dual Weapons, and 1 Pit Fighter with Punch Dagger or Spear.

The set also contains Spire Tyrants abilities cards in English, French, Italian, German, Spanish, Chinese, Japanese, and Russian that let you harness their gladiatorial might on the battlefield, and fighter cards for keeping track of your models in battle.

What’s more, these models can be used in your Warhammer Age of Sigmar Slaves to Darkness army! Just grab their free warscroll from the Downloads tab. 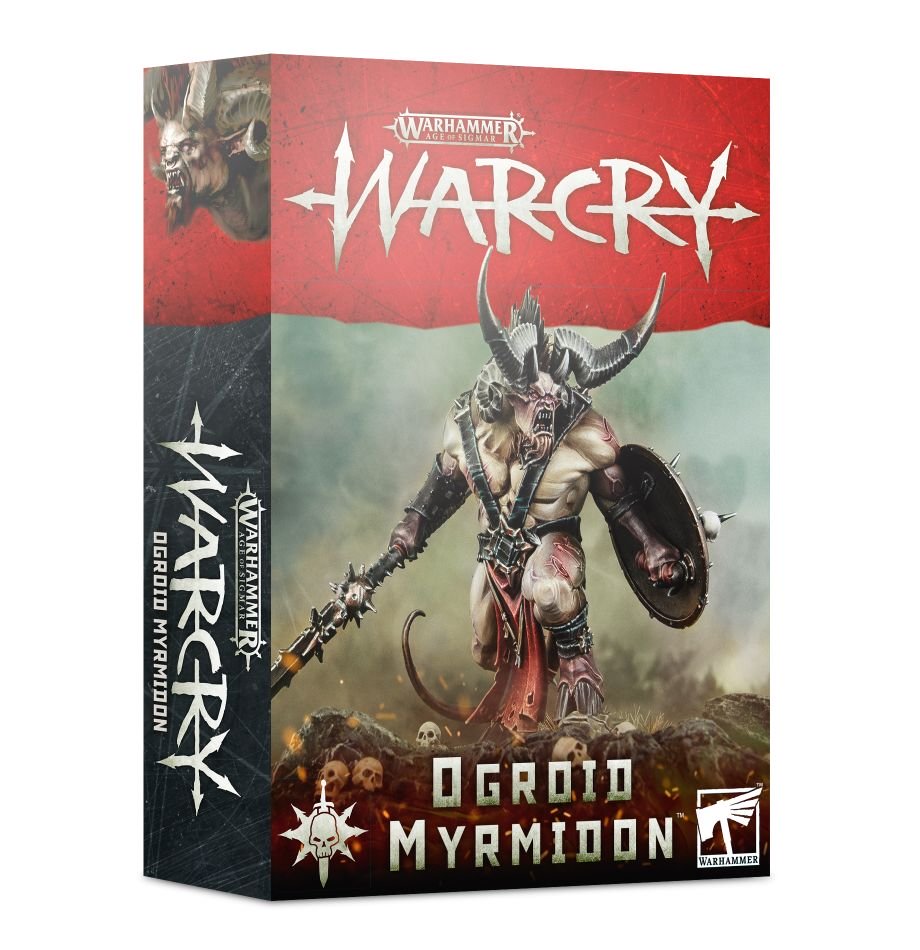 Myrmidons are masters of the Varanspire’s fighting pits, and have spent decades mastering the gladiatorial arts. In battle, they lead those who seek to join the Everchosen’s legions, for to impress a Myrmidon is to be marked for glory.

Whether you’re commanding your Slaves to Darkness or seeking favour in the Bloodwind Spoil, if you have a Chaos collection, you want an Ogroid Myrmidon. This hulking champion is more than just a deadly close combatant, but a great leader for your units. This expansion lets you bring the Ogroid Myrmidon to your games of Warcry. Add him to your Iron Golems, Corvus Cabal, Cypher Lords, Splintered Fang, Untamed Beasts, The Unmade, Spire Tyrants and Scions of the Flame warbands as an Ally, and harness deadly abilities with included fighter and ability cards.

This set contains a multipart plastic Ogroid Myrmidon with a 50mm round base. It also includes an Ogroid Myrmidon Warcry Fighter Card and ability cards in English, French, Italian, German, Spanish, Chinese, Japanese, and Russian.

Please note – you’ll need a copy of the Warcry Core Rules as well as Monsters & Mercenaries to use this set in Warcry. Rules for using this model in Warhammer Age of Sigmar can be found in the Downloads tab. 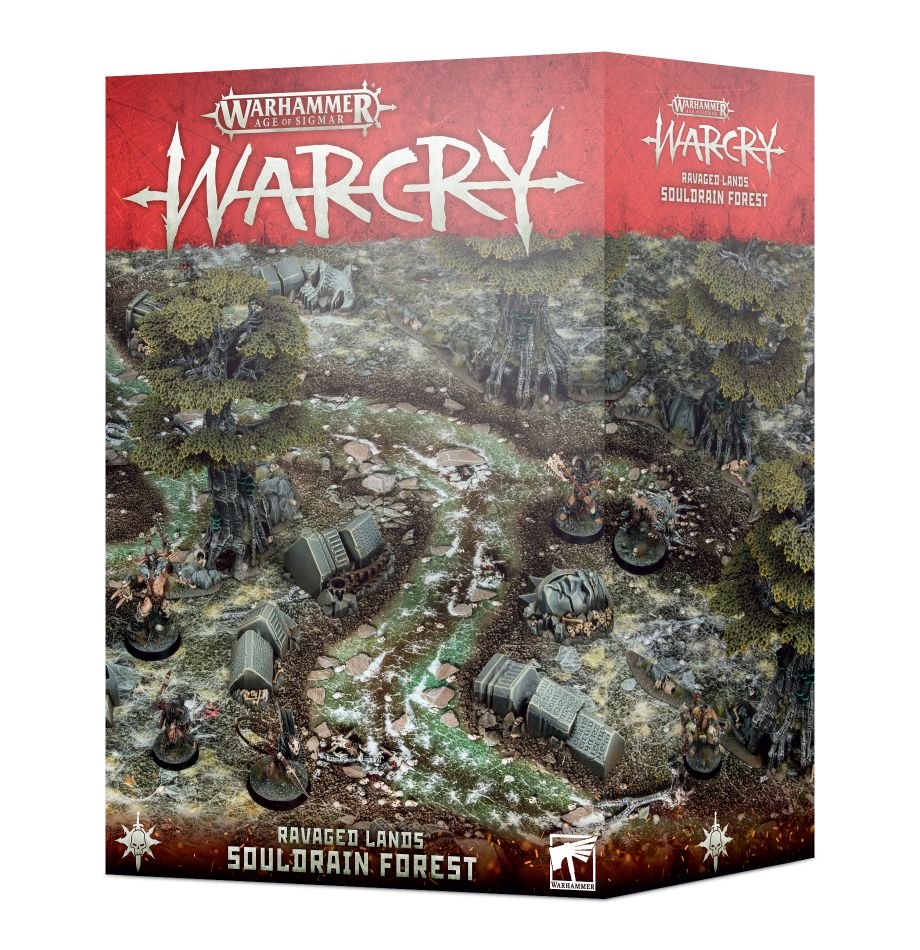 The Eightpoints is a vast and endlessly varied land, thoroughly suffused with the transmutational power of Chaos. Within its shifting borders can be found all manner of deadly environments – gheist-haunted ruins dating back to the Age of Myth, forests of sentient, blood-drinking trees, spires of cursed crystal that drain the mind and petrify the flesh, and a thousand-thousand other twisted landmarks. Scattered amidst this wild, untameable place are encampments and frontier settlements, ruled over by merciless warlords and home to some of the most wretched killers and deviants in the realms.

Ravaged Lands sets are designed to expand your core Warcry experience with new challenges and thematic terrain. This set contains a selection Wyldwood scenery, plus ruined staturatary for adding even more tactical depth to your battlefields.

This set contains a 22”x30” double-sided gameboard to battle over – one side depicts a ruined tile floor, while the other features a wasteland that matches the gameboard from the Warcry Starter Set, allowing you to combine your scenery collections for bigger battles!

The set also includes a double-sided Warcry token sheet for keeping track of your fighters, plus 36 terrain cards – combine these with battleplan cards to set up your games. Whether you’re looking to expand your Starter Set or beginning your journey in Warcry, this set is perfect for you! 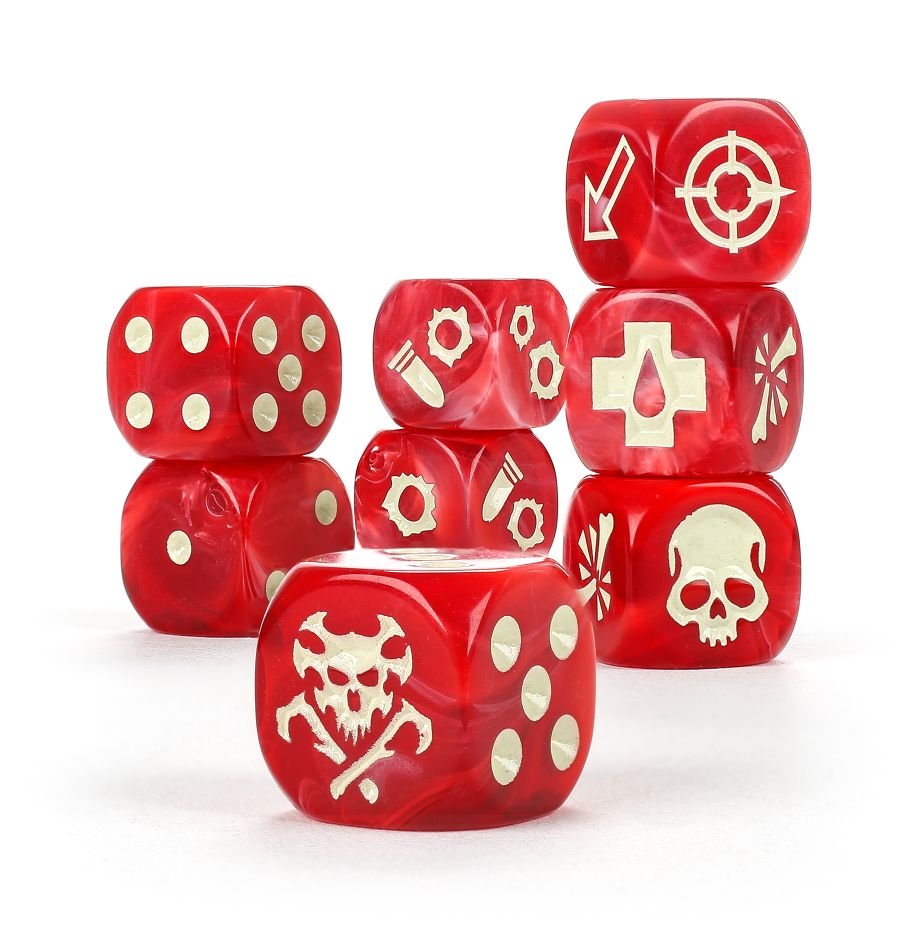 Show your dedication to the Lord of Skin and Sinew with this special Corpse Grinder Cult-themed dice set. The eight 16mm dice are red with a marbled effect and feature a bone coloured in-fill on the numbers and symbols. 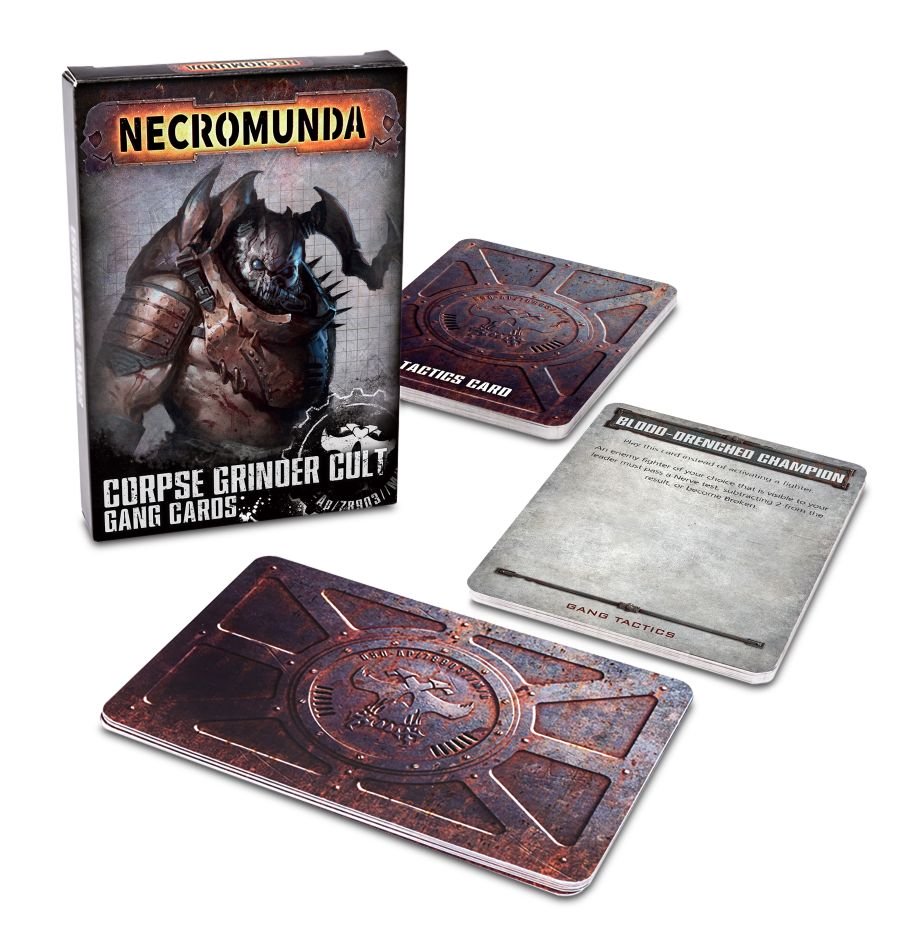 Expand your games of Necromunda with these 26 cards, representing the myriad tricks and schemes that can be used to gain an advantage in the underhive. As well as cards specifically for the Corpse Grinder Cults, there are also a number of Gang Tactics cards that can be used by any gang.

You will need a copy of the Necromunda Rulebook and Necromunda: The Book of Ruin or Necromunda: Dark Uprising to use the contents of this set. 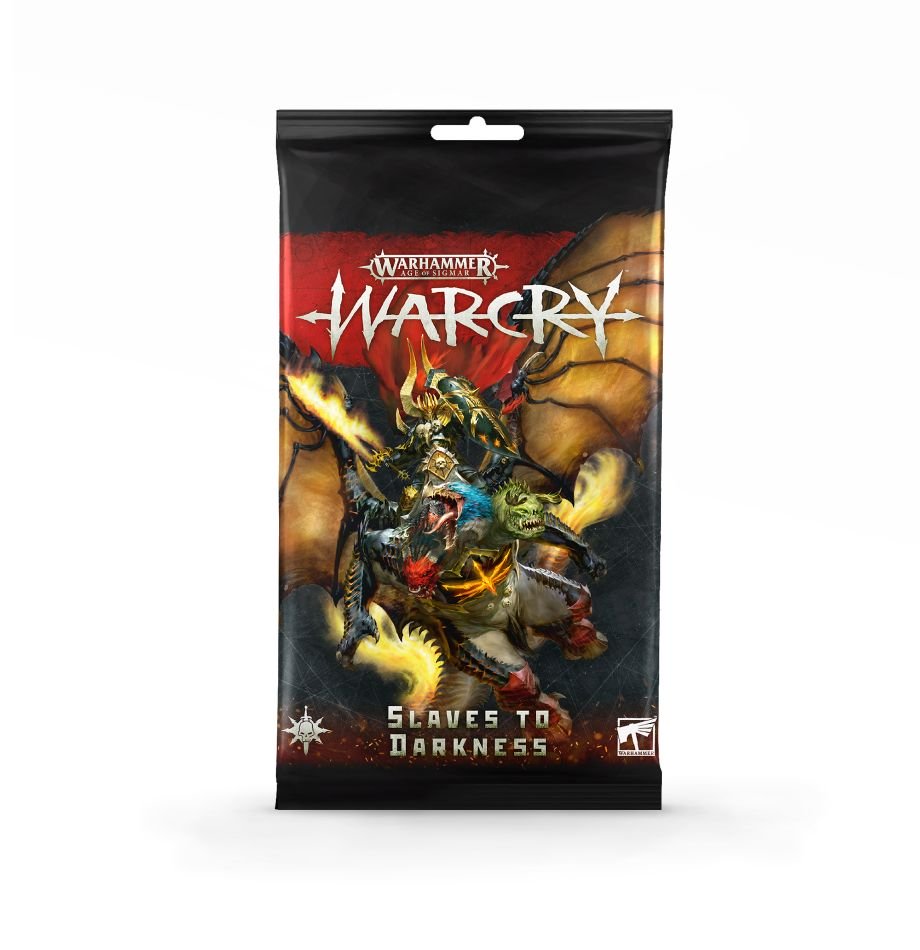 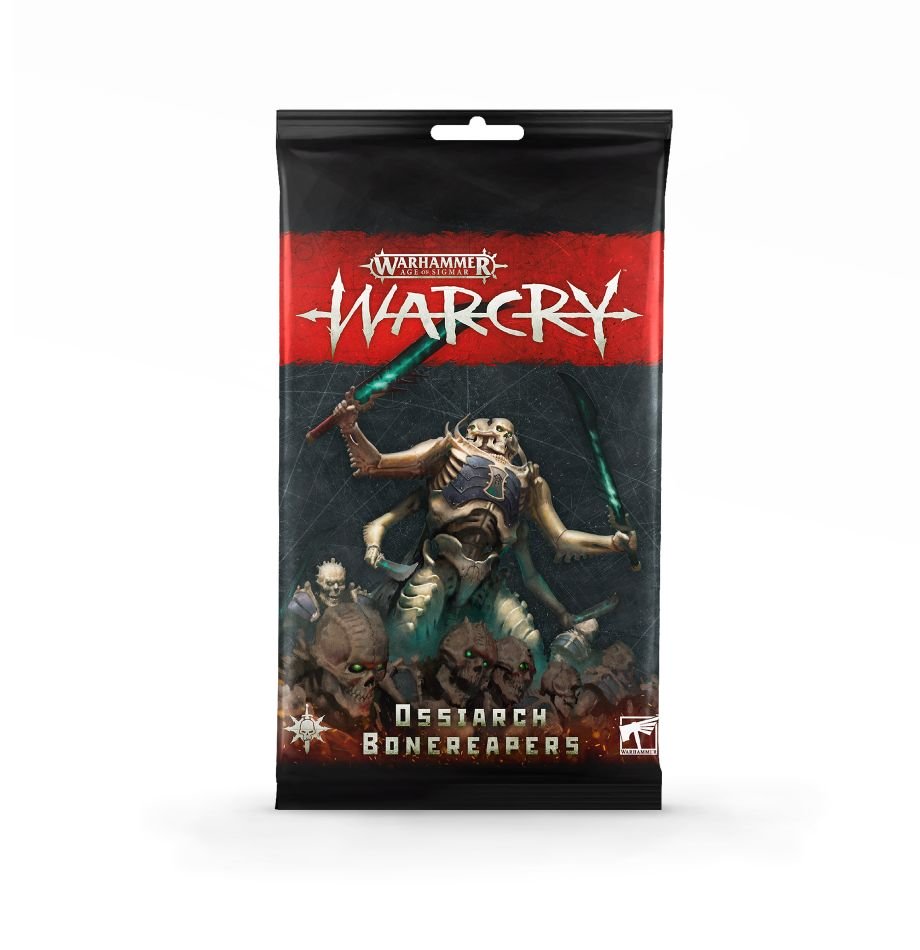 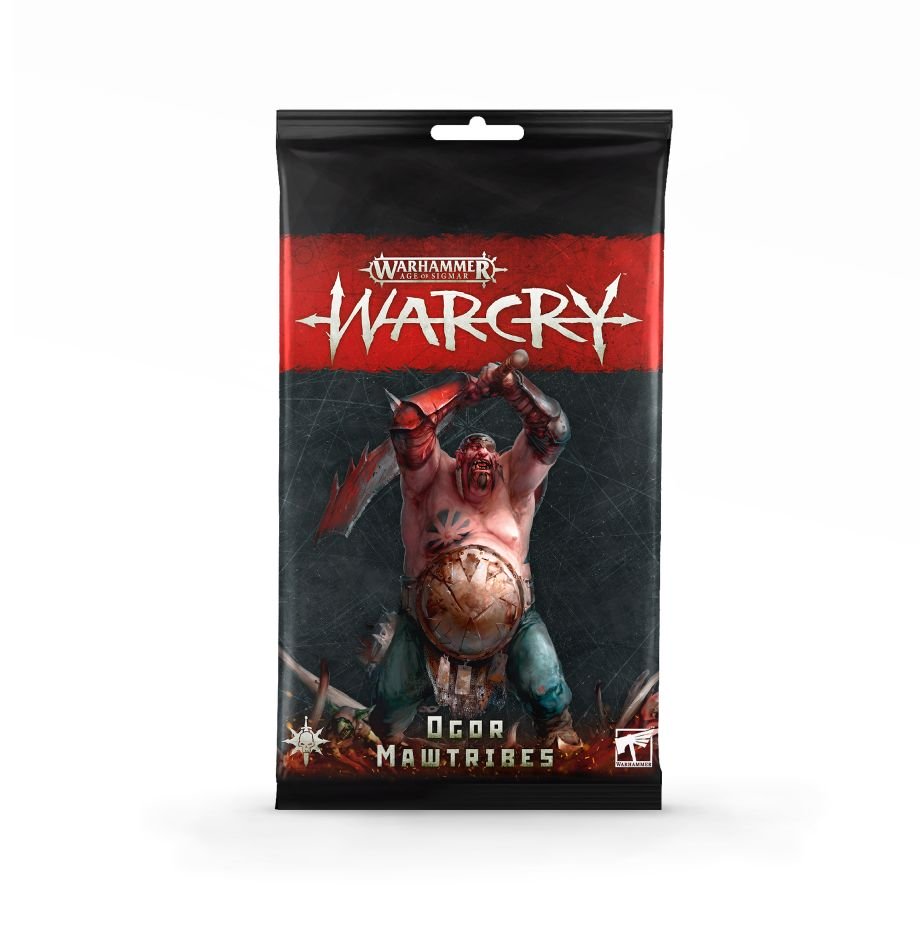 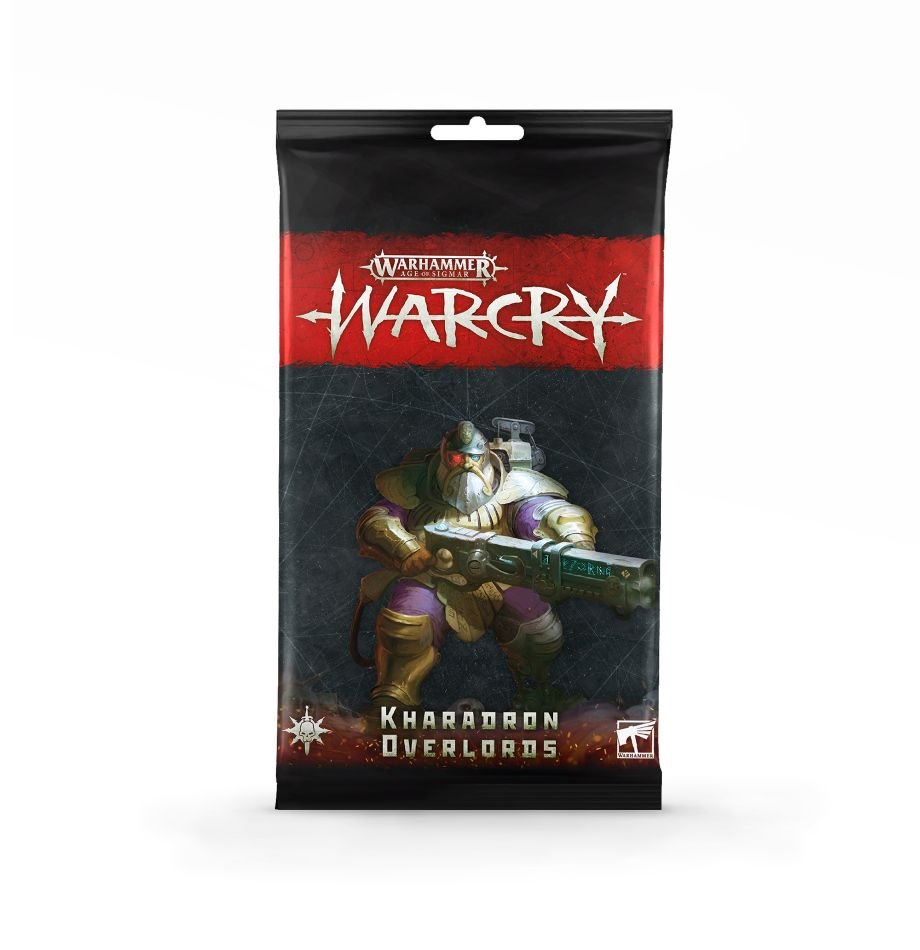 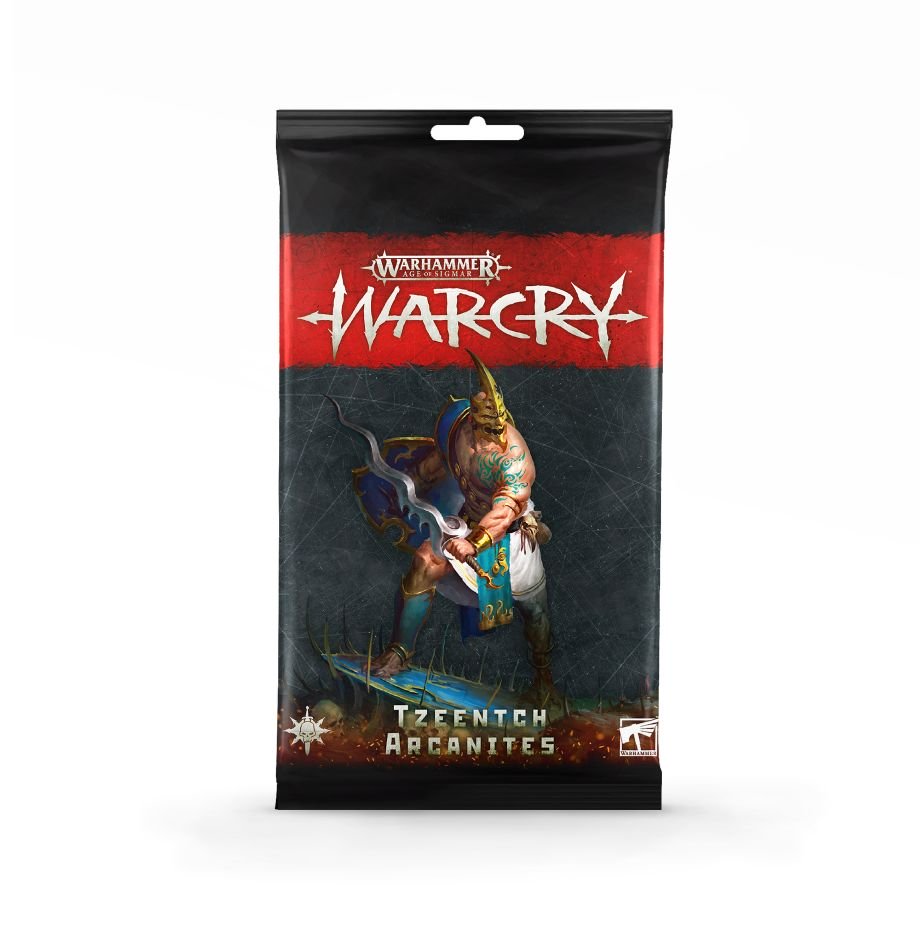 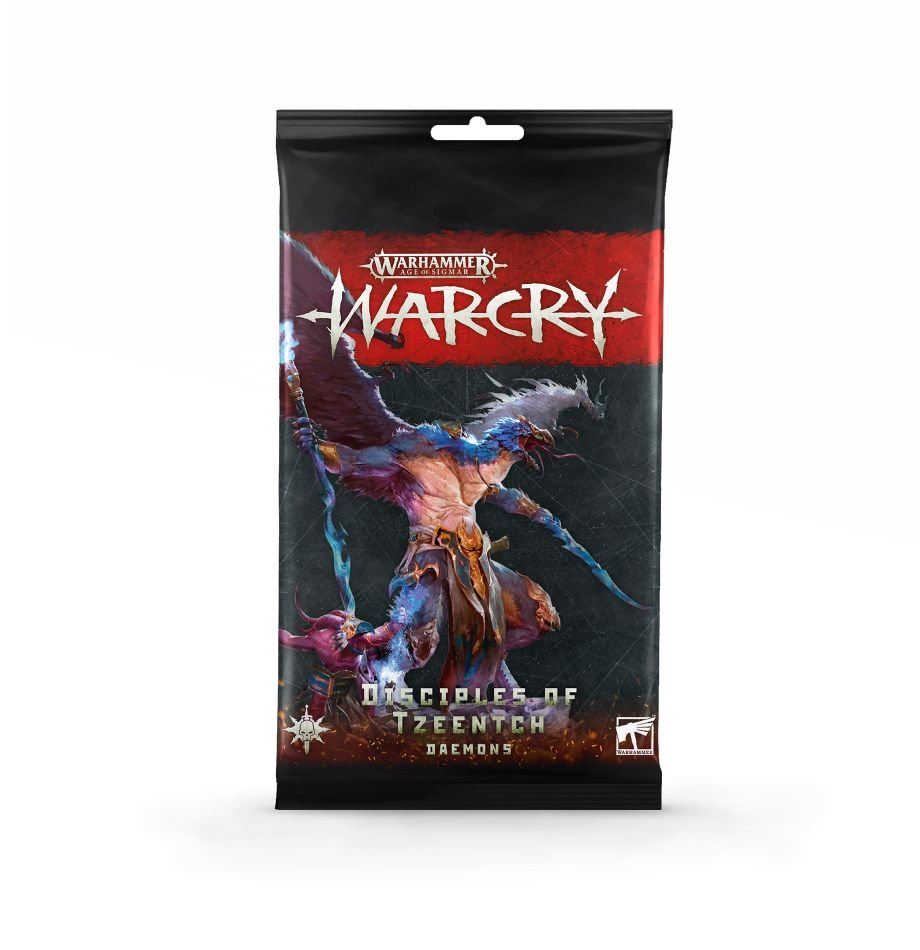 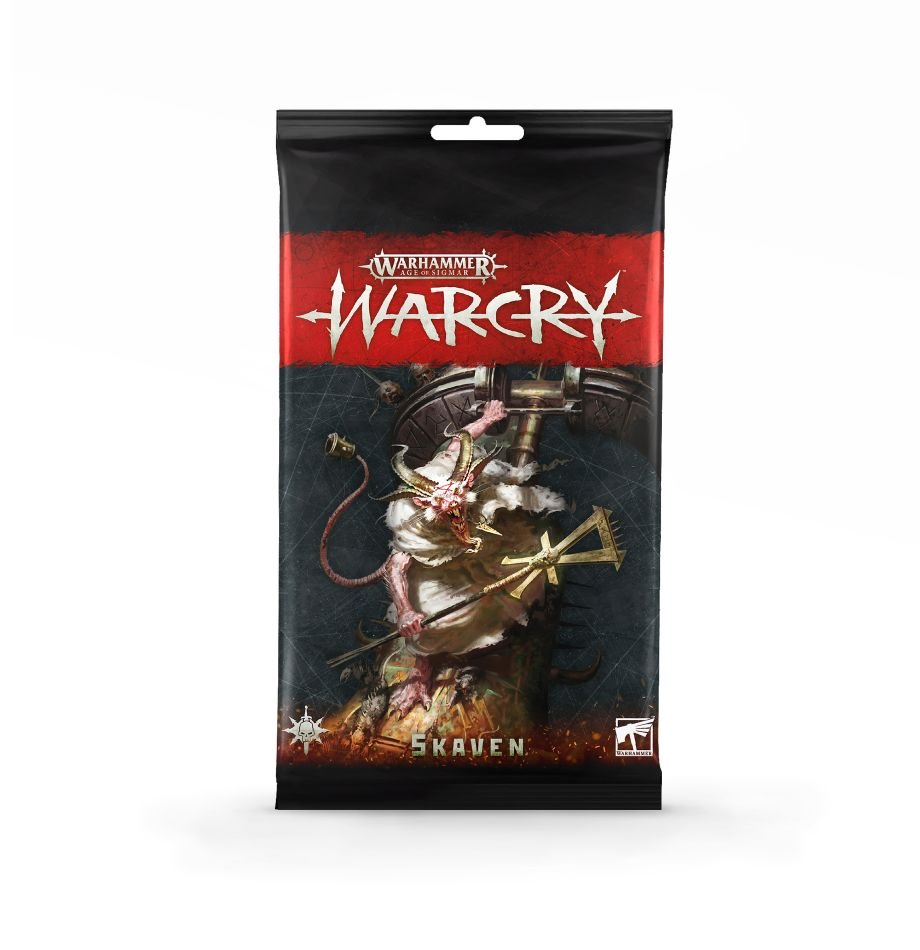 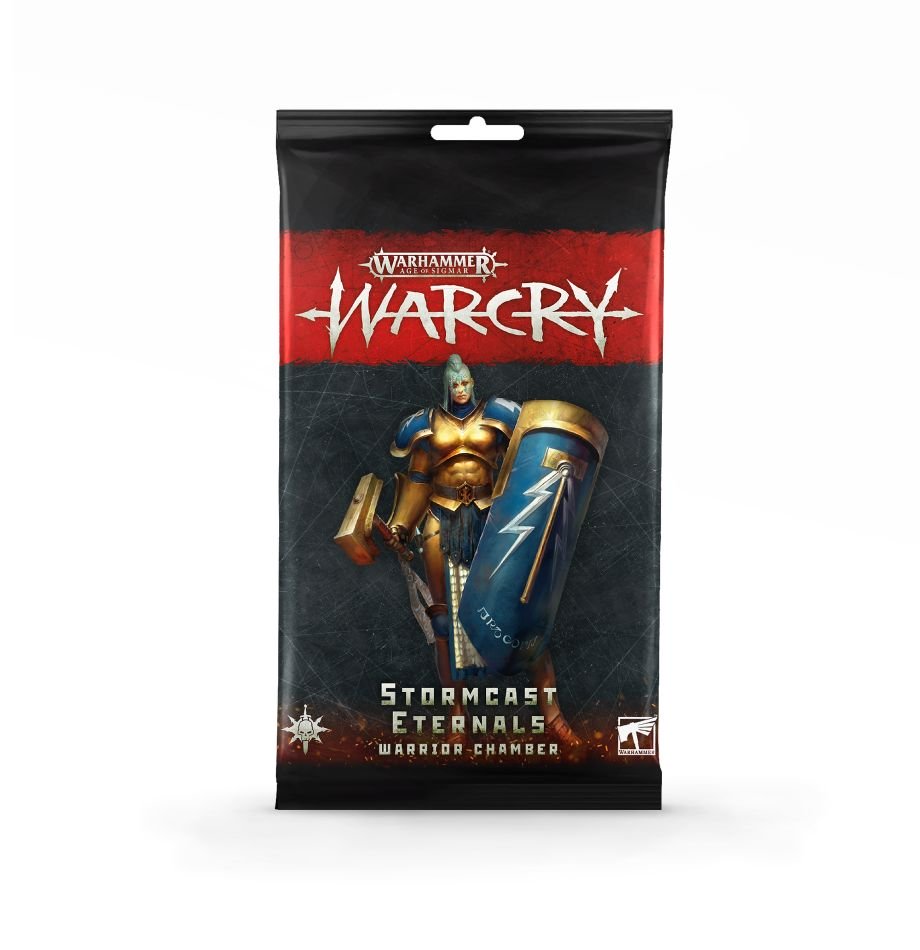 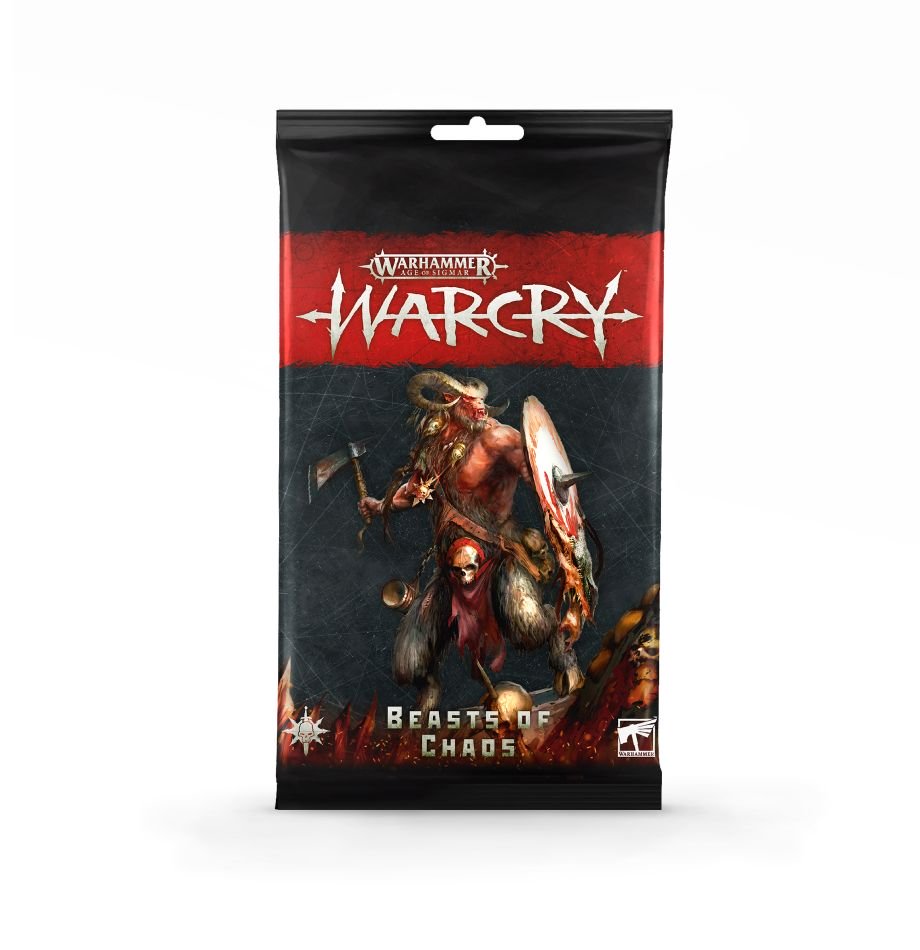 Get a card pack and go play some Warcry!