We’re taking a look at the newest G.U.A.R.D. Monster, Nova! What does this new model bring to the table?

The third G.U.A.R.D. monster, Nova, has arrived and brought along some interesting questions. Let’s take a look at Nova’s cards and try to figure out a game plan. 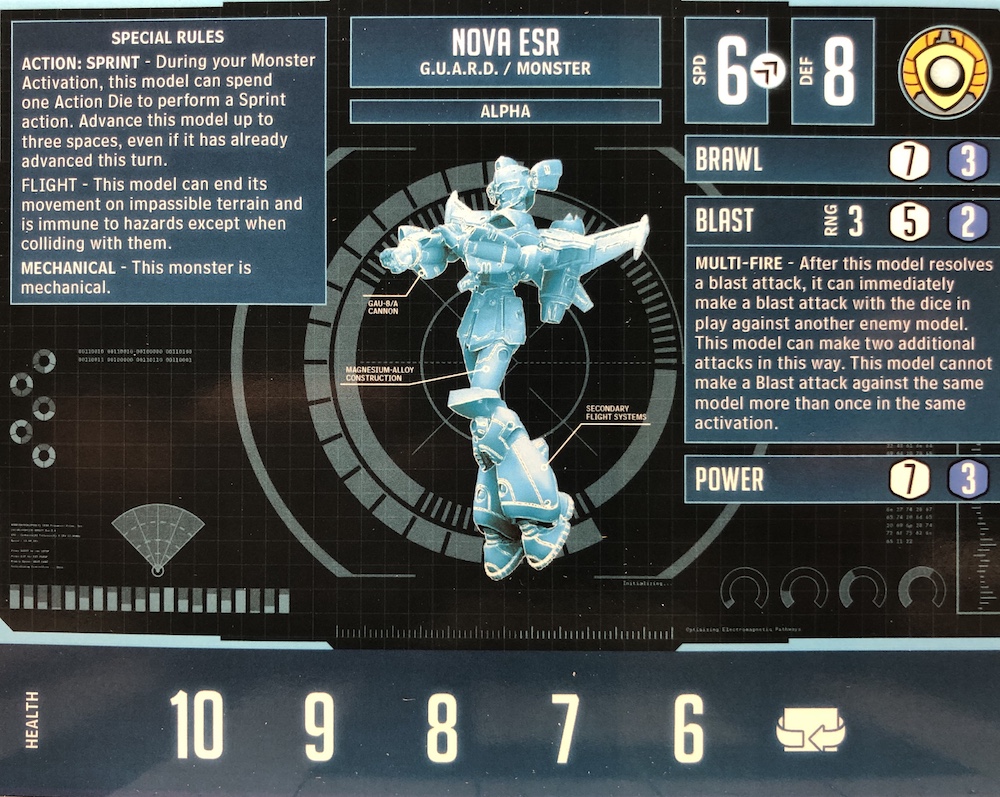 With a base SPD of 6, Flight and Action: Sprint Nova is able to get across the board with ease. This can be ratcheted up to 11 with buildings like the Industrial Complex or Mount Terra, allowing Nova to potentially harass enemy models all over the city.

The biggest standout rule on Nova’s card is Multi-Fire on the Blast attack. This is the same rule the Rocket Ape has – allowing Nova to make up to 3 attacks with the same dice. However you’ll quickly notice the lack of Blue dice on this Blast attack, only 2 Boost dice with the potential for up to 5 dice. Another important number to notice is the RNG 3 on this attack, meaning Nova is often going to be up close in order to get her 3 attack targets in range.

I’m torn on how I feel about Nova’s Alpha form. There are a lot of similarities between Nova’s Blast and the Rocket Ape Blast attack, yet the Rocket Ape I consider to be one of – if not the – best units in the game, where on Nova I’m not sure.

Maybe it’s the RNG 3 vs RNG 5 on the Rocket Ape or maybe it’s the difference in having the attack available on a monster vs a unit. When most monsters go to attack a unit, 1 Action die and the Boost dice are enough to ensure the unit dies. Using fewer Action dice with Monsters is generally preferable, so you can keep taking back to back Monster turns. With Nova though you’ll need to plan on using 3-4 white dice if you are facing DEF 3+ units, which can feel bad. I don’t think this actually makes Nova bad, just something you will have to understand and have a strategy for. 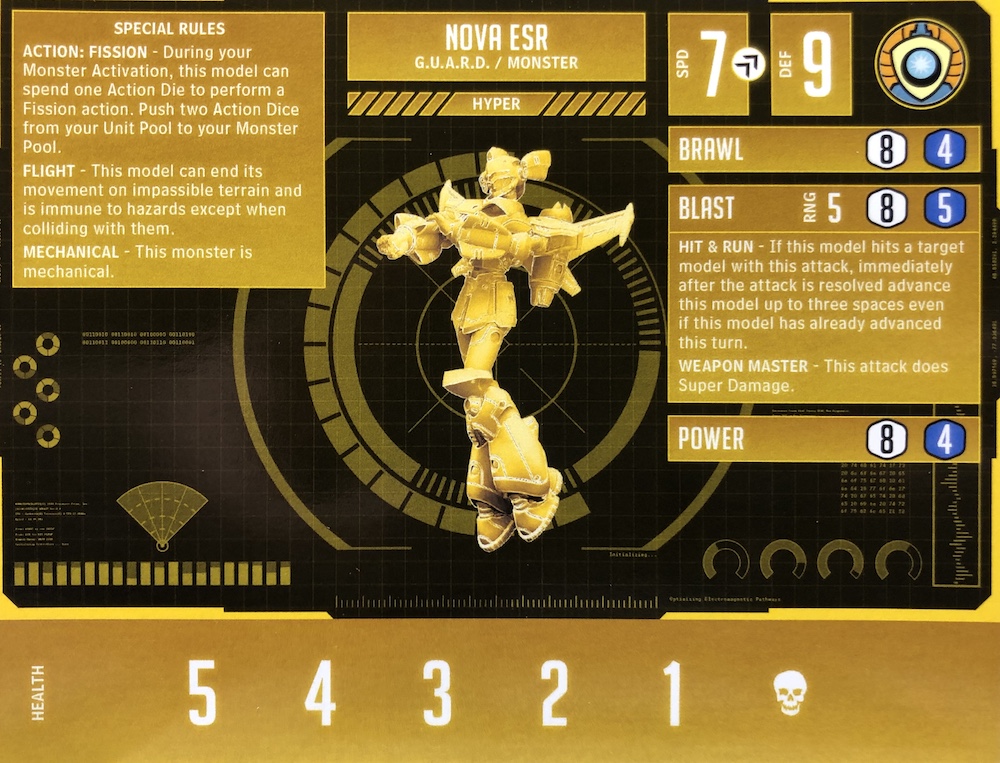 In Hyper form, Nova loses Action: Sprint in favor of Action: Fissure, a fantastic ability that essentially gives you a free Action die each turn. Nova also trades in the Multi-Fire attack for Weapon Master and Hit & Run on the Blast. Lastly, Nova gains +1 SPD and DEF, resulting in a pretty impressive stat line.

I quite like Nova’s Hyper form, going from an Action dice hog to being efficient, able to potentially take an infinite number of back to back activations if you only spend 1 Action die per turn(not likely, but it’s technically possible). With Weapon Master Nova is able to dish out 2 damage from 5 spaces away, then retreat an additional 3 spaces away with Hit & Run. This will let you be very cagey with Nova – retreating to the safest possible location each turn. With a base of 5 Boost dice on the Blast and plenty of access to Spotter in protectors, Nova can get away with spending very few Power dice to produce 2 damage each activation.

Nova definitely wants to be a harassing Monster, with only 10 health and abilities that focus on mobility in both forms. While I think Nova’s Hyper form is very strong, it can be a fool’s errand making a game plan around the Hyper Form of a monster. You never know if, or how many, activations you’ll get in Hyper form.

That leaves us needing a good plan to use Nova in Alpha form. As I mentioned earlier, planning around using Multi-Fire and Sprint in Alpha means Nova will be spending a fair amount of Action dice. This means cycling through more units turns, so having a strong unit plan is a must. For killing enemy units and disrupting their power base the Rocket Ape is always a good choice. For dealing damage to enemy monsters during the unit turns, I’ve got my eye on a newer unit, the MR-Tank. 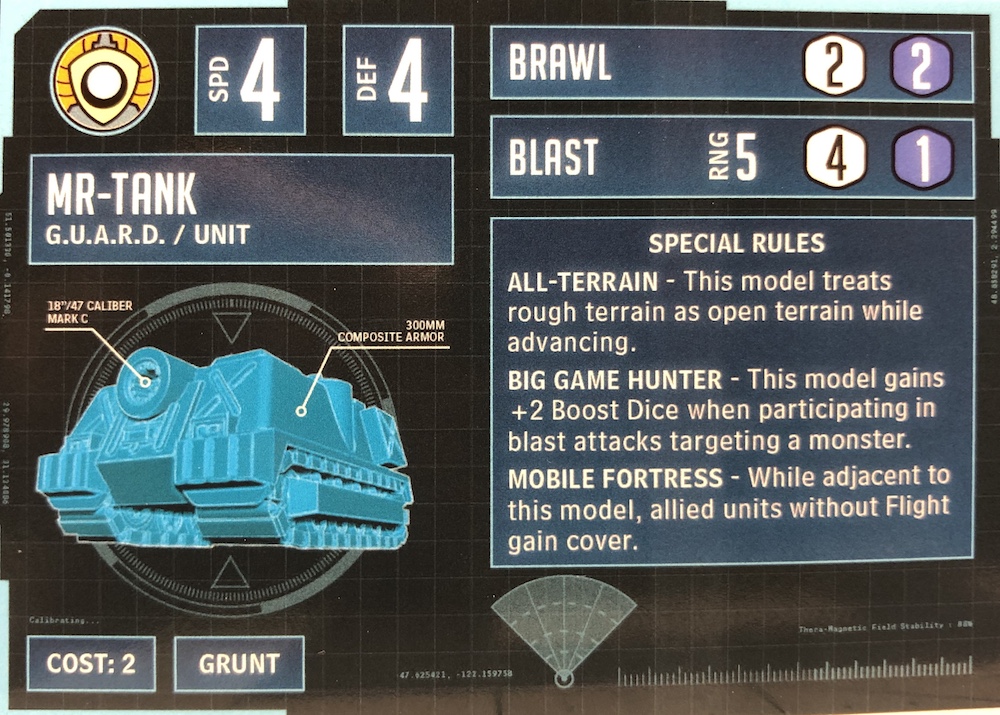 The key rule on the MR-Tank being Big Game Hunter. Taking more unit turns means more opportunity to spawn expensive units so the plan will be a pair of MR-Tanks. With 2 MR-Tanks a Rocket Chopper and re-roll from the GUARD tower you have a 92% chance of hitting a DEF 8 monster! 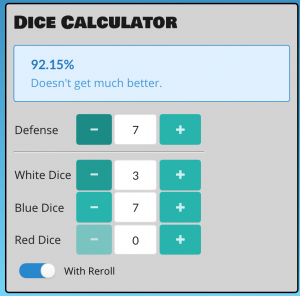 After a few games I can definitely say Nova doesn’t have any obvious meta bending abilities that everyone will need to plan for. However with a good plan Nova has the potential to be a good supporting monster.

What are your thoughts on Nova? Do you have a game plan you like?