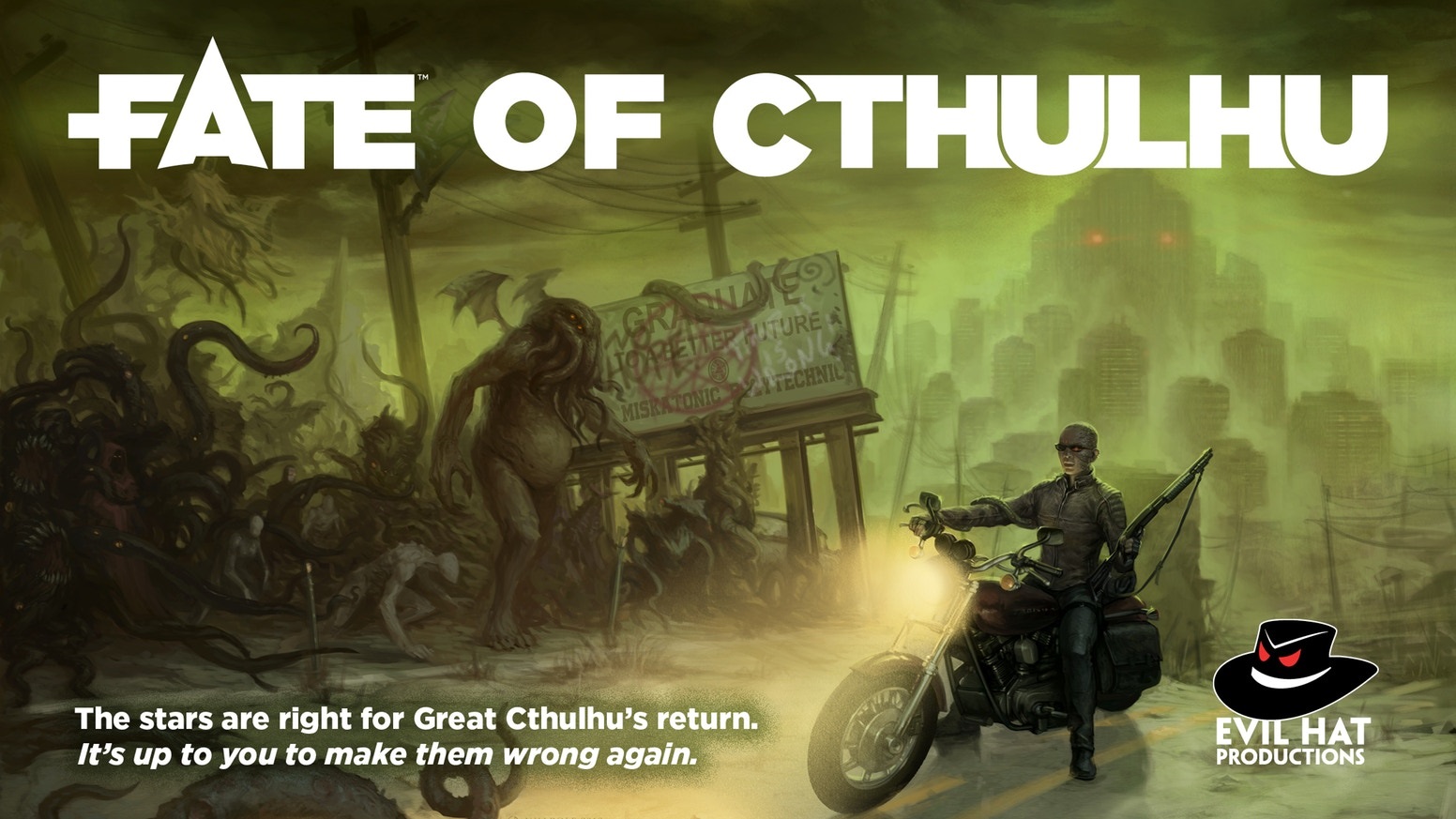 Evil Hat’s newest take on Lovecraft’s mythos comes with an acknowledgement of the darker side of the cosmic horror author’s life. It’s about time.

Fate of Cthulhu the newest game set in a world inspired by HP Lovecraft’s Elder Gods mythos, casts players as the role of Terminator-esque heroes sent back in time to prevent the rise of one of the Great Old Ones, who are themselves trying to alter events so that their ultimate reign on the world comes to pass. It runs off of the Fate Core system, has mechanics that help drive home the corruption and horror themes of the game, and to top it all off it comes with an acknowledgement about Lovecraft’s racism: 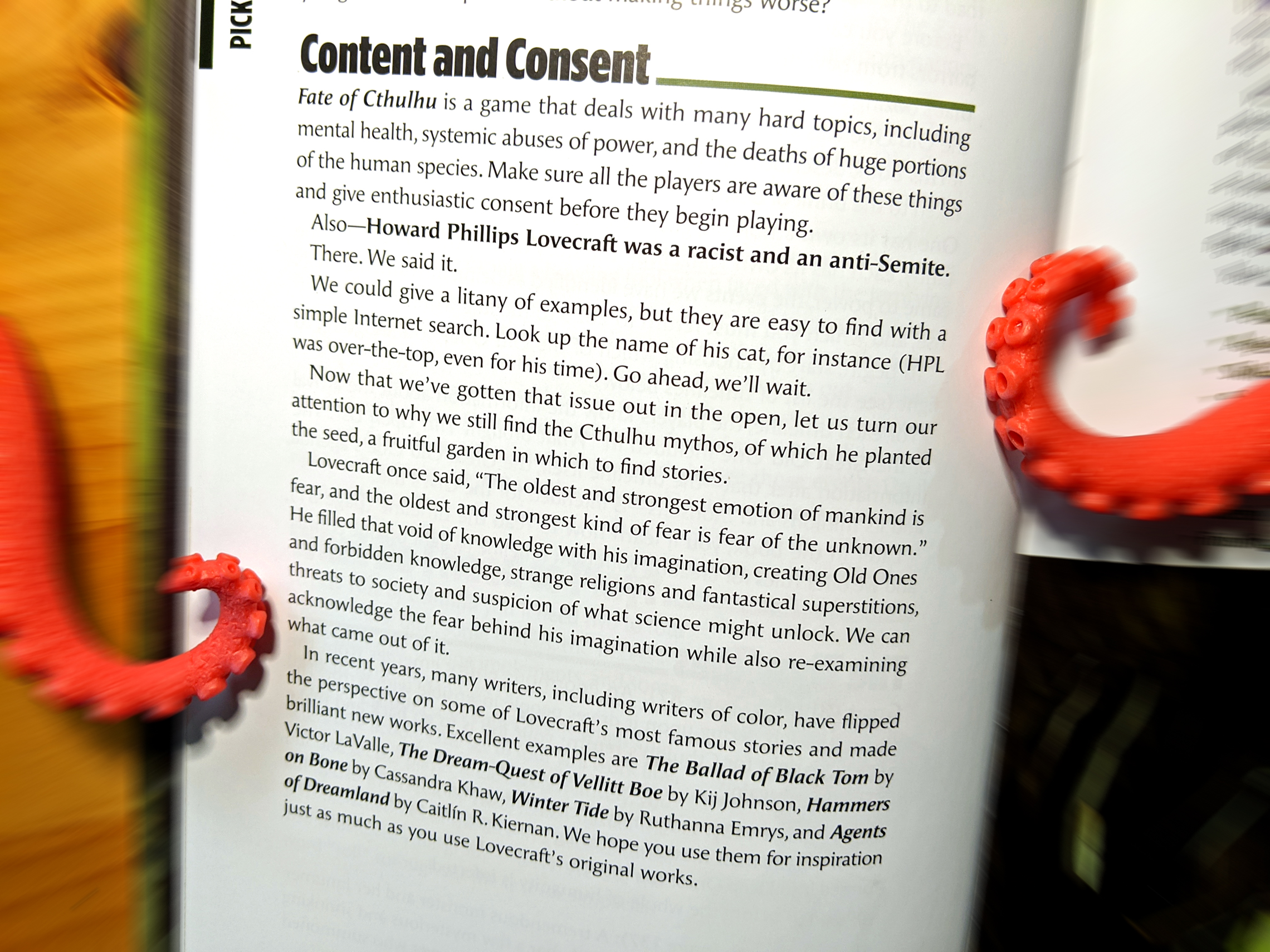 There’s a nice touch of listing a few other authors working in the cosmic horror genre, writers of color in particular. It’s an interesting moment for games, as we make our way into the future. It certainly speaks to a shift where marginalized people are making their voices heard louder and clearer–the authors behind the statement want to acknowledge Lovecraft’s flaws and failings in order to find a way to use the inspiration and cosmic horror that we’re all familiar with, so as not to alienate potential players. It signals that the team behind the book have at least in some way ‘done the work’ to produce a book that’s safe for marginalized allies. 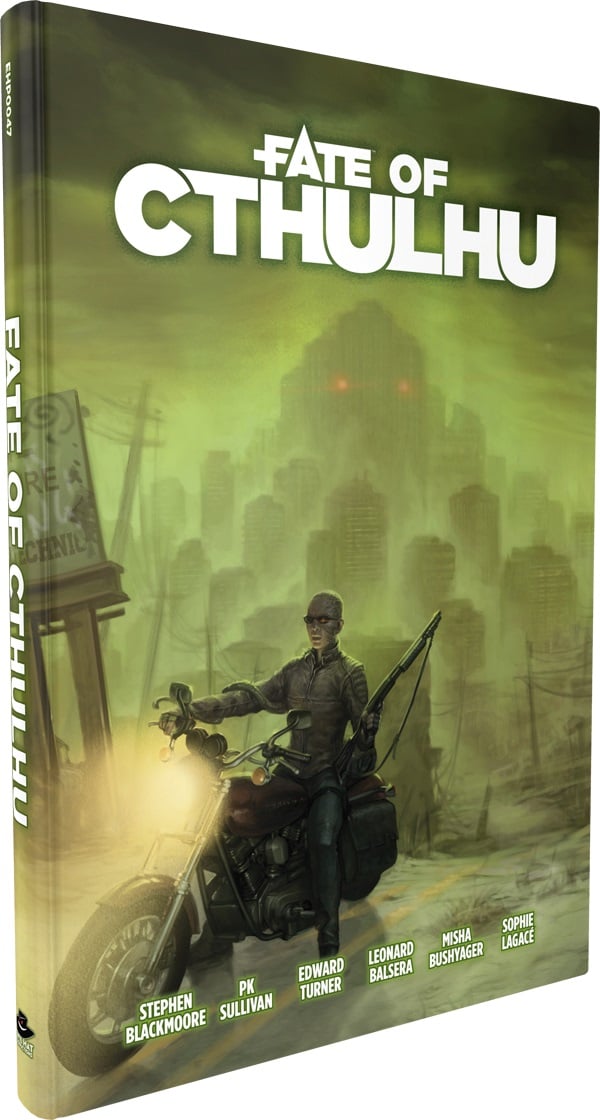 But what does ‘doing the work’ actually look like? Is it enough to simply say, ‘hey the guy who wrote a lot of this stuff? Super racist!” and, addressing the elephant in the room here, Lovecraft was mega racist, even for his time. Lovecraft was so racist he made Robert E. Howard, author of Conan less of a racist. And it’s not like this is hidden info–many people know it, but even in 2020 it’s striking to see someone actually saying the part that everyone quietly acknowledges out loud in an officially published book based around it. That’d be like putting an intro at the beginning of Harry Potter Hogwarts Battle that says “Hey, look JK Rowling is a TERF and her ideology is lukewarm garbage, but she made a world that so many people are invested in.”

It’s a sentiment that’s out there in the world, but you mostly tend to see it voiced online where anyone can fight about it until the cows come home. But, is simply saying the part that “everyone knows” enough to fix a universe where a big part of the horror stems from the idea that brown people are scary? I don’t know. It’s a conversation–and it likely will continue to be one well past the sell-by date on Fate of Cthulhu. But it’s started at least. Naturally people on the internet have been responding with cool and calm heads that can appreciate the growing pains and baby steps of an industry tackling hard stuff that needs to be tackled. 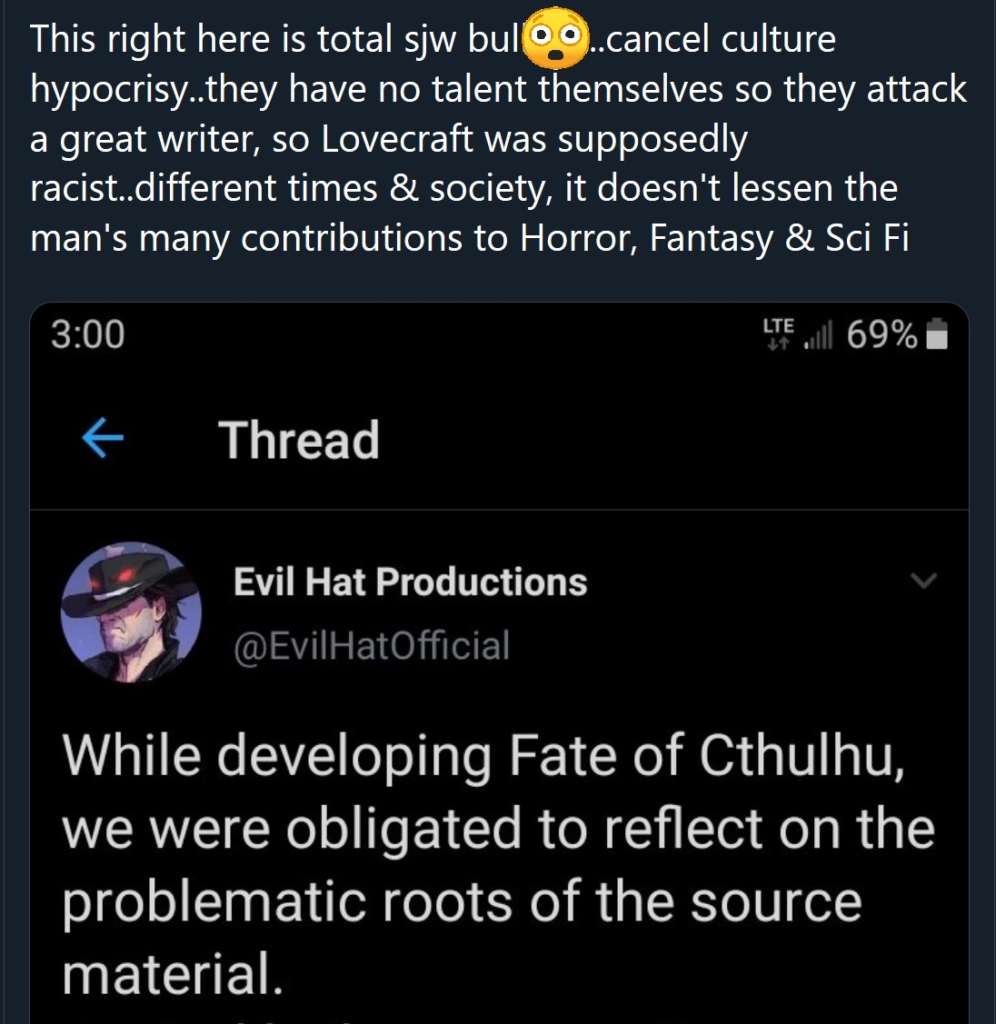 Which in turn led to Stephen Blackmoore, creative director for the game, making a response of his own. 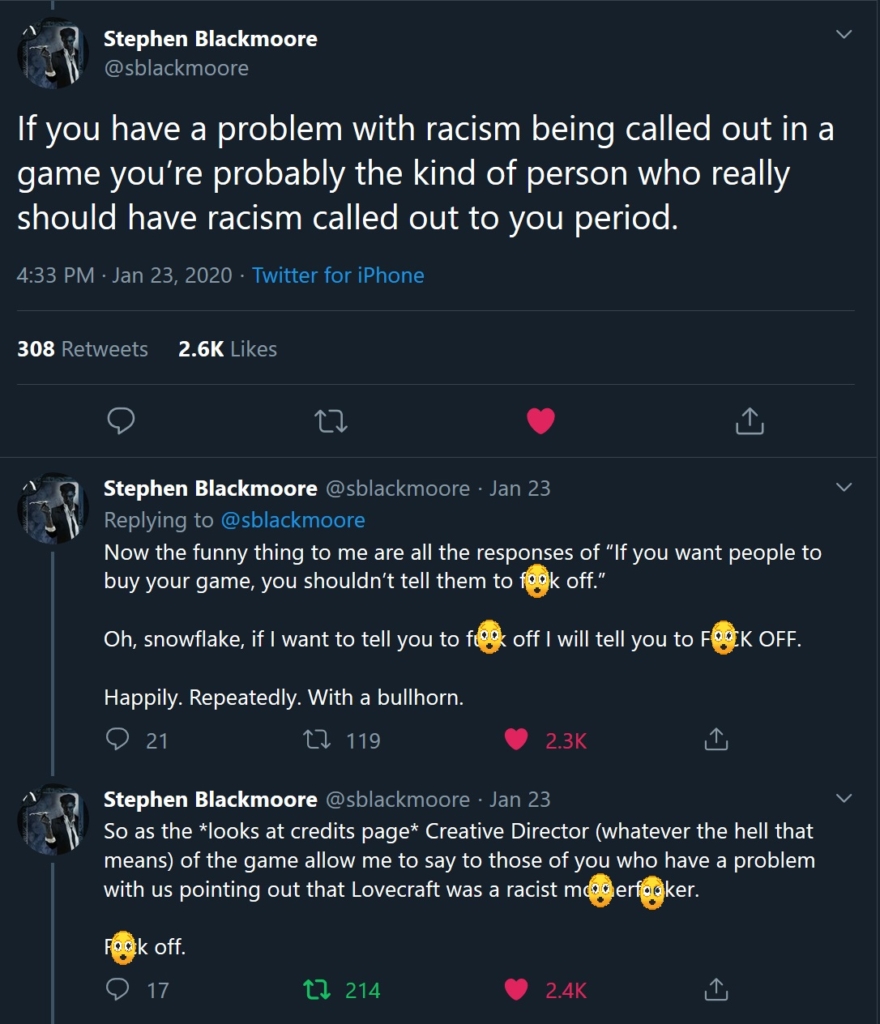 You can find the rest of the thread on Blackmoore’s twitter, and it’s definitely worth the read if you don’t mind sorting through the replies. But what does doing the work look like? Acknowledging the harm that racist ideology has caused is a start. Suggesting other places to look for inspiration, also a pretty good next step. It’s a constant conversation though. There’s no magical “well that’s enough work put in towards fixing the harm it’s done, we’re done now” that fits for any particular work (or even a whole category of work). A few things seem like common sense: don’t use cthulhu monsters and cultists as stand-ins for people of color, don’t use any real-world racism, and in general just think about what you’re putting into your campaigns and why. 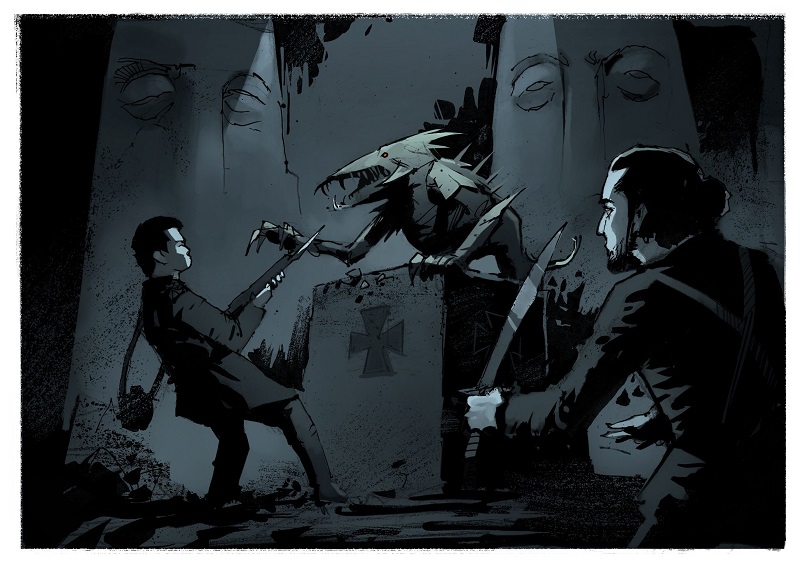 Kinda like how in D&D, you can pretty easily just not use fantasy racism, like calling elves Knife-Ears or whatever, and your game will be just fine. Even if you want to signify that your game is gritty and nitty you can still find plenty of other ways to do it that don’t involve racism, even of the fantasy variety. Same with the cosmic horror of Cthulhu. Does this fix everything? Not by a long shot, but it’s an interesting start to 2020.

What conversations do you think RPGs will have in the near future? What do you think of the disclaimer? Let us know in the comments!

Author: J.R. Zambrano
Bell of Lost Souls Staff Writer and DM, J.R. covers RPGs of all stripes and on occasion eats sandwiches. You can ask him about either at [email protected]
Advertisement
Cthuhlu RPGs Tabletop News
Advertisement

AoS Next Week: Nurgle's Finest And Wrath Of The Everchosen