Warhammer 40K: Get Inspired For The Sisters of Battle With These Stories

Black Library has a lot of resources that you can tap for more inspiration for your next Sisters of Battle Army!

Are you looking for that magic spark to get invested in your own Sisters of Battle Army? Maybe a particular theme you want to build? Well Games Workshop and Black Library have you covered with these novels, eReads, and Audio Dramas. If you want to dive into the lore of the Sisters – here is a road map!

Sisters of Battle: The Omnibus 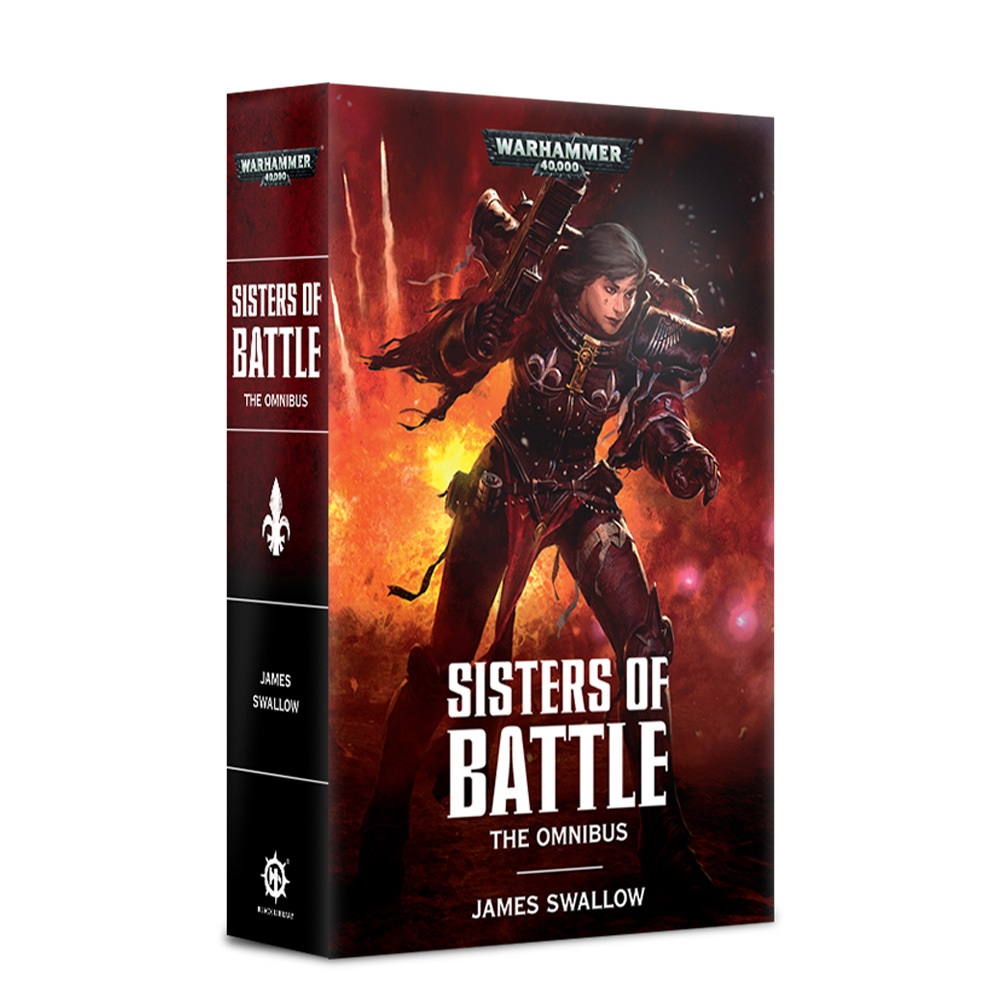 This book contains 4 stories of the Sisters of Battle and it’s the perfect place to start. You’ll follow the adventures of Sister Miriya and her comrades as they investigate a newly discovered Necron Tomb World. Plus three other exciting tales from author James Swallow.

DESCRIPTION
The Adepta Sororitas, or Sisters of Battle, are the military arm of the Ecclesiarchy, and their remit is to prosecute the enemies of mankind with extreme prejudice. Uniquely among the fighting forces of the Imperium, all the warriors of this organisation are female. Clad in ceramite power armour and armed with and awesome array of wargear, they fight with fanatical fervour for the glory of the Emperor, scourging both xenos and heretic alike with bolter and flamer. This omnibus collects together James Swallow’s two classic Sisters of Battle novels, ‘Faith & Fire’ and ‘Hammer & Anvil’, along with the prose version of the audio drama ‘Red & Black’ and a new short story ‘Heart & Soul’, both available in print for the first time. 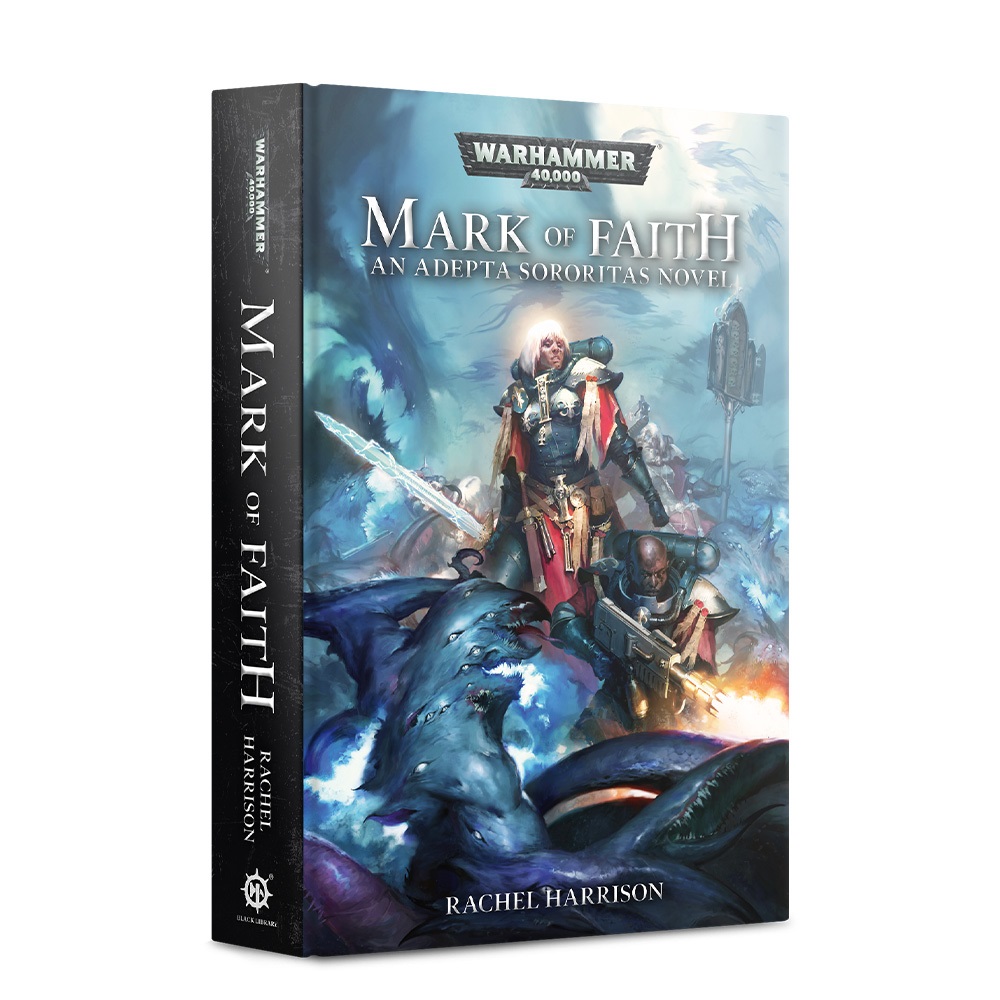 This one is available as an eBook, Hardback, or even an Audiobook if you want to listen to this on your daily commute (or while painting your Sisters models). In this tome of the Sisters, you’ll join Sister Evangeline of the Order of Our Martyred Lady in a crusade against the darkness following the war for Ophelia VII. This story from Rachel Harrison helps frame the Sisters of Battle in a post-Cicatrix Maledictum galaxy and fills in some of the “blanks” for the Sisters as the storyline of the Grimdark has moved forward.

THE STORY
With the birth of the Cicatrix Maledictum the Imperium of Mankind suffers as never before. Conflict and corruption is rife on every front and precious little hope remains, save for those who hold to their faith when faced with destruction…

Denied a martyr’s death during the battle for Ophelia VII, Sister Evangeline of the Order of Our Martyred Lady is blessed with a new and grave duty; to embark on a pilgrimage beyond the Great Rift to recover a precious and powerful artefact – the Shield of Saint Katherine. Accompanied by the enigmatic Inquisitor Ravara, who seeks her own closure in the veiled regions beyond the Rift, Evangeline must find a way to bear the weight of this unasked-for destiny if she and her Sisters are to succeed in restoring a fragment of light to this new dark Imperium. 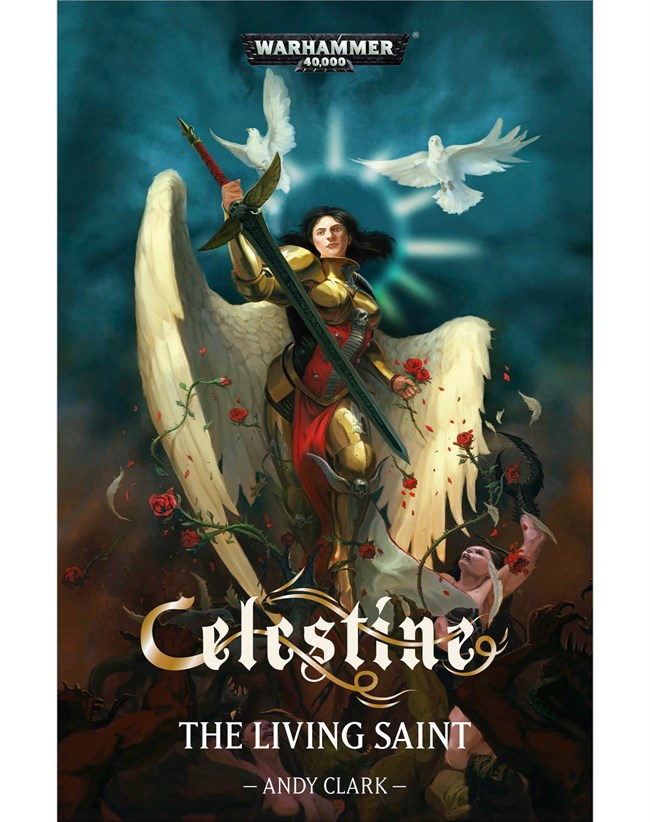 This one is all digital as an eBook or an Audiobook MP3. From the mind of Andy Clark, if this story doesn’t inspire you and your troops to new acts of faith in the Emperor, nothing will! This is the story of the one and only Saint Celestine and uncovers one of the greatest mysteries of her Sainthood. When Celestine is struck down on the battlefield, what happens when she dies and comes back? Want to find out? Read the book!

THE STORY
With her mighty wings spread wide and Ardent Blade aflame, Saint Celestine is the living embodiment of the God-Emperor’s wrath. Her halo blazes like a star upon the smog-wreathed, blood-soaked battlefields of the 41st Millennium; its holy light leading the faithful to victory time and time again. As heretics and daemons tear at her flesh, she calls down fires of retribution from on high to smite the wicked and unrighteous.

If she is to fall in battle, none should mourn as she is Celestine, the Living Saint, and death is her duty. Though it comes at a great cost. For each time she is slain, Saint Celestine finds herself trapped in a terrible realm of suffering and torment. There her faith in the God-Emperor will be put to the test so she may prove herself worthy of life once more. 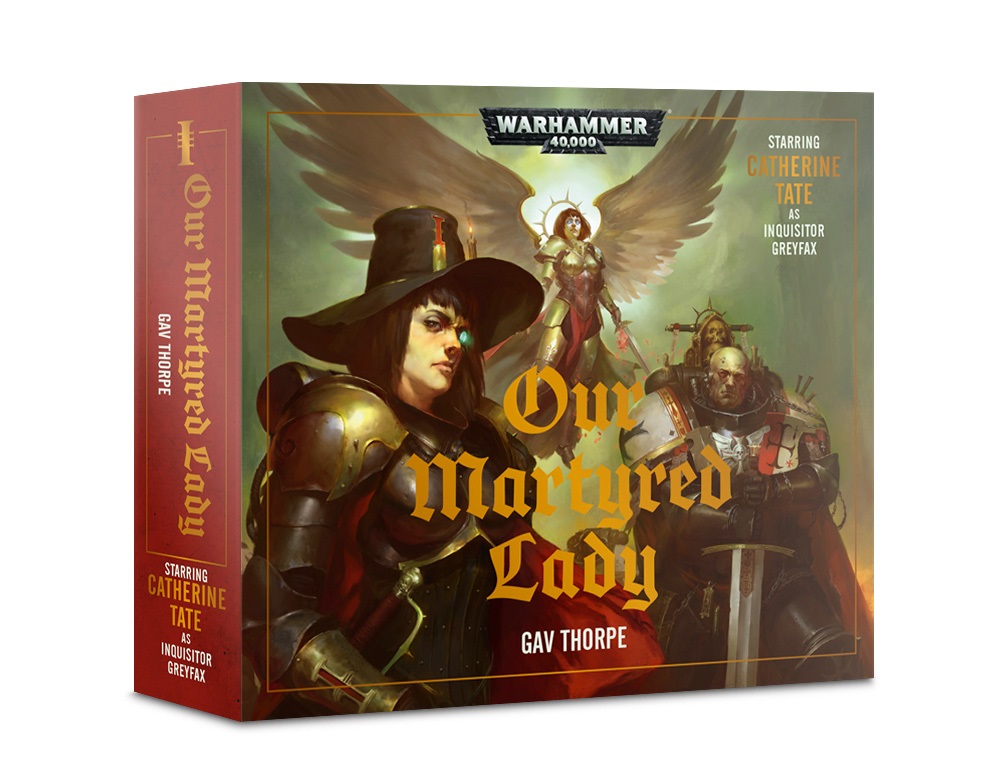 If you’re like me and your having trouble finding time to actually read for entertainment then you’ll be happy to learn about the Audio drama that is Our Martyred Lady. Written by Gav Thorpe, this set follows the enigmatic Inquisitor Greyfax and Saint Celestine as they have to join forces to combat a mighty foe. It also features veteran Actor Catherine Tate.

THE STORY
During the turbulent Reign of Blood, a great schism in the Imperial Ecclesiarchy threatened all of Terra and promised a darkness to rival the terrors of Old Night. Fell times have come again to the Imperium and a War of Faith appears inevitable. Standing in the way of catastrophe is Celestine, the Living Saint and one of the greatest heroes of the age. Only she can reunite the warring factions of the Ecclesiarchy and prevent a second Reign of Blood. Together with the Inquisitor Greyfax, Celestine and her allies must hunt across the shrineworlds of the Imperium and beyond to root out the evil behind the schism and burn it out with righteous, cleansing flame.

These stories are sure to get you started. What other media do you consume to help you get inspired for the Sisters of Battle?!