Warhammer 40K: How To Make A Marine Immune To Bolters 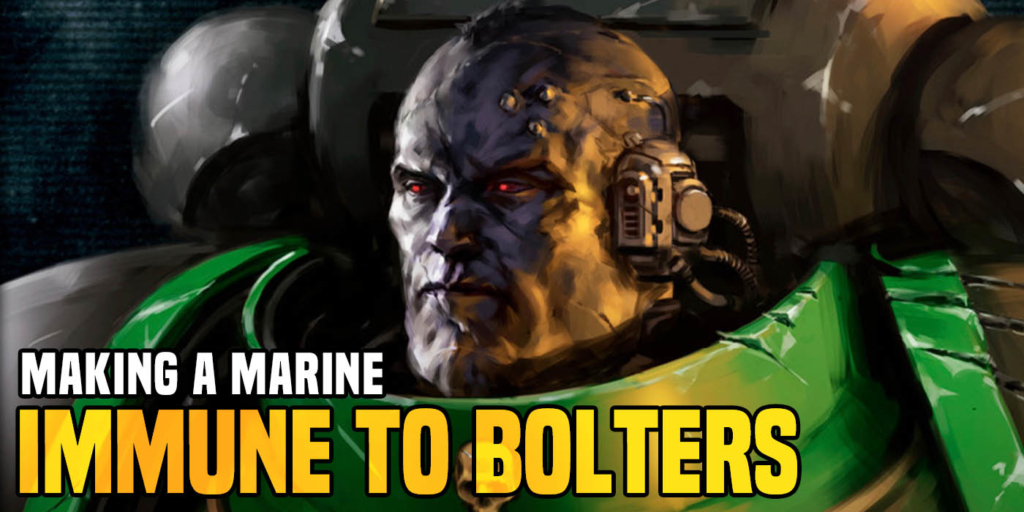 Let’s talk about the Legendary Ban’er Ur’venn of the Salamanders- the Man Who Can’t Be Killed.

Among the staunch defenders of humanity in the 41st Millennium, few groups are as revered as the Space Marine captains.  To be a captain among Space Marines is not merely to be a peerless warrior, but to be a leader and an inspiration. Across the eons, many of humanity’s finest have born the mantle of Captain. Sicarius, Lysander, Kor’sarro, He’Stan, Tycho, Blackmane, Loken, Garro, these names ring out across the galaxy.

On the tabletop Captains also play a significant role, as one of the common, and often deadly, leaders of Space Marine forces. In the past years, the Smash Captain build of Blood Angels captain has become a staple. Last year I introduced a couple of new builds, a powerful Crimson Fist build, and a deadly White Scars build. Both of these builds were deadly, but no tougher than your average Captain. Now I’ve found a build that makes what is possibly the hardest to kill character in the game. I give you: Ban’er Ur’venn. 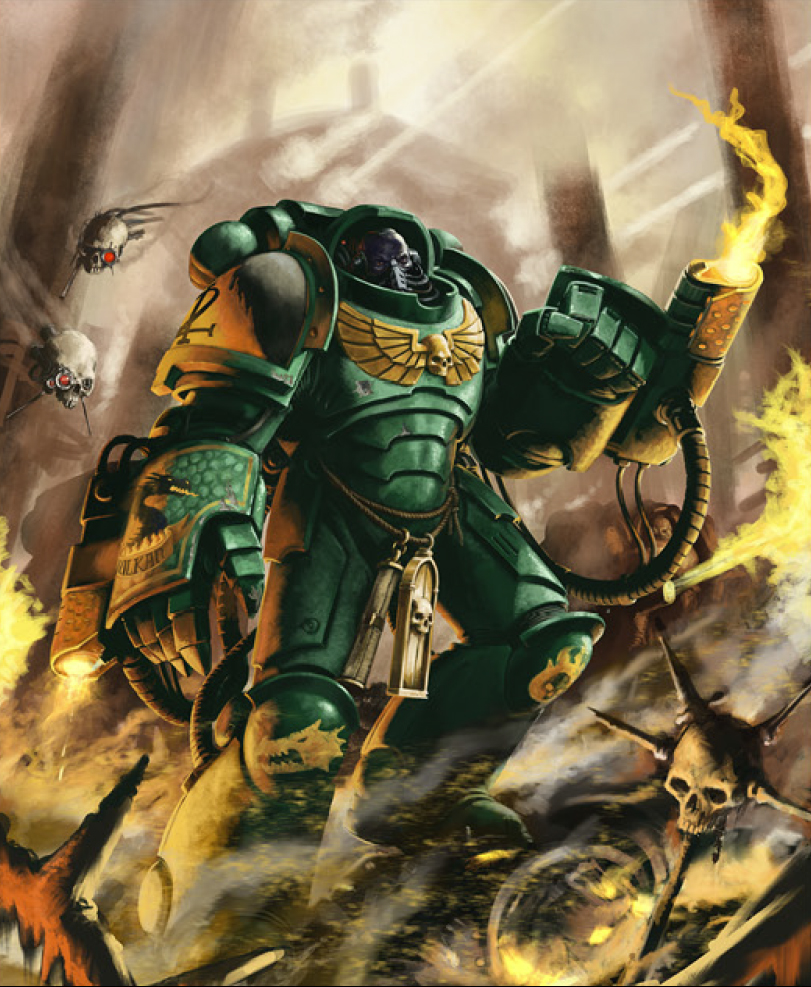 Little is known of Captain Ur’venn’s youth. While he must have been born on Nocturne he was not found there. Instead, it is said that servitors located him wandering the halls of the Chalice of Fire, Vulkan’s great relic forgeship, wearing nothing both a cloak of salamander scales he had fashioned for himself and a ripped pair of pants. The appearance of a lone child wandering in a secured ship raised many alarms, and it was at first thought he must be a demonic or xenos infiltrator in disguise. Testing proved otherwise, and also revealed that he would make a good candidate for transformation into a Space Marine. It must be concluded that he stowed away on a ship coming from Nocturne and simply wandered into the wrong place at the right time.

Ur’venn’s transformation went without incident, and he served many unremarkable years as a Salamander, first as a scout and then a full brother. Though to some, he seemed resistant to harm, even for a son of Vulkan, his service was unremarkable, and over decades of service, he did little to stand out. He was known as a solid member of his squad.

During an otherwise normal deployment, Ur’venn’s squad was deployed to the Hive World of Upshar. The world has recently undergone an uprising of Chaos Cults and needed stability. The Salamanders were tasked with defending the primary reactor core of Hive Primius and were supported by a regiment of local PDF. Only hours after the arrival of the Salamanders, the PDF regiment revealed themselves as traitors and turned on the Angels of Death, trying to gain control of the reactor and trigger an explosion that would destroy Hive Primius.

Ban’er and half a squad of Marines were tasked with holding Beta Gate, with the remaining Marines held Alpha Gate. It took nearly 8 hours for reinforcements to arrive, and during that time, Beta Gate suffered a heavy attack. Ban’er’s squadmates eventually succumbed to the sheer weight of fire, but not Ur’venn. When he was finally relieved, his armor had seemingly been blown off his body, and more than 400 impacts were found on him, yet the Las- and Autogun fire of the enemy seemed not to affect him- ever after he was known as the Gate of Upshar.

Afterward, Upshar Ur’venn seemed a new man and was often noted for carrying out great feats. It was whispered that he had truly inherited the legendary resilience of the Primarch, for it seemed nothing could kill him. For a time, he served as Captain of the 5th Company, riding a custom-built bike into battle.

When Primaris technology was given to the Salamanders, he was one of the first to cross the Rubicon, without trouble, and soon took to battle in masterwork Gravis armors. He formed a fast friendship with several of the Chapter’s Librarians and often worked closely with them. In battle, the Captain cuts his way across the field. He has been hit with lascannons, crushed by massive claws, caught in the blast of a dying Titan, and swallowed whole by monsters, and each time emerged to fight on. On Ballas IV, he charged four squads of Black Legion troops and was seen to laugh as bolter rounds bounced off him. Truly this is a Son of Vulkan.

Though Captain Ur’venn has been missing for several years now, thought lost on the death world of Sakaar, many believe he will one day return to battle alongside his brothers once more.

To field Captain BAn’er Ur’venn, the Captain who won’t die, you have a couple of options. You want to start with either a Captain in Gravis amour or a Captain on a bike.  If you’ve gone Graivs he comes with default options; if you take him on a bike, I recommended equipping him with a Thunderhammer and a Stormshield. While the bike option is likely better, both work for this trick, and if you want all Primaris, you can use the Gravis build. He is, of course, of the Salamander Chapter. From here, we need to give him some buffs.

First, we are going to give him the Warlord Trait Forge Master. This will bump his T up to 7. Next, we are going to give him the relic the Salamnder’s Mantle, giving him a -1 to be wounded. This alone is a pretty crazy combo. With it, he is T7, meaning that S3 or fewer attacks need a 6 to wound him. However, since all attacks on him take a -1, it means that S3 and fewer attacks simply can’t hurt him at all. (I looked long and hard, but I could not find anything out there that says a 6 to wound auto wounds, correct me if I am wrong.) But we can still take it up a notch here. With EXEMPLAR OF THE PROMETHEAN CREED, we can give him a second warlord trait, in this case, let us go with Miraculous Constitution. Next, we need a Librarian with the Tome of Vel’cona; this will let him cast from both the basic and Salamander spells. He is going to want to cast both Might of Heroes and Drakeskin on Ur’venn.

Putting this all together gives us a Captain with 6 or 7 wounds (depending on your base) that is T9 with a -1 to be wounded. Meaning that he is utterly immune to s4 and fewer attacks, and even lascannons wound him on a 5+. He’ll have a 3+ save and either a 3++ or a 4++ and an extra 6+++, and heals a wound each turn. Even if he should be killed, you’ve got Rise From the Ashes to bring him back. Oh, and he is still a killy captain. I think we’ve got just about the hardest to kill character here.

Let us know what you think of Captain Ur’venn, down in the comments!