With three books out for Psychic Awakening, we’ve got a few stand-out stratagems that you should be aware of.

So far we’ve gotten 3 chapters of Psychic Awakening with 3 more on the way. We’ve already seen some of the ripples take shape on the game in general and more acutely in the meta. However, if you haven’t been keeping up with the books because you’re army hasn’t gotten new rules, it would make sense to feel overwhelmed due to all the extra stuff in them. From wargear to stratagems to warlord traits and just completely new upgrade paths, it’s just a LOT to cope with.

So today we’re going to highlight some of the more common stratagems that you’re going to run into. You could call these the cream of the crop…or just really popular/easy options to use. But if you don’t know about them, they can really feel like a “Gotcha” moment, and we HATE “Gotcha” moments. 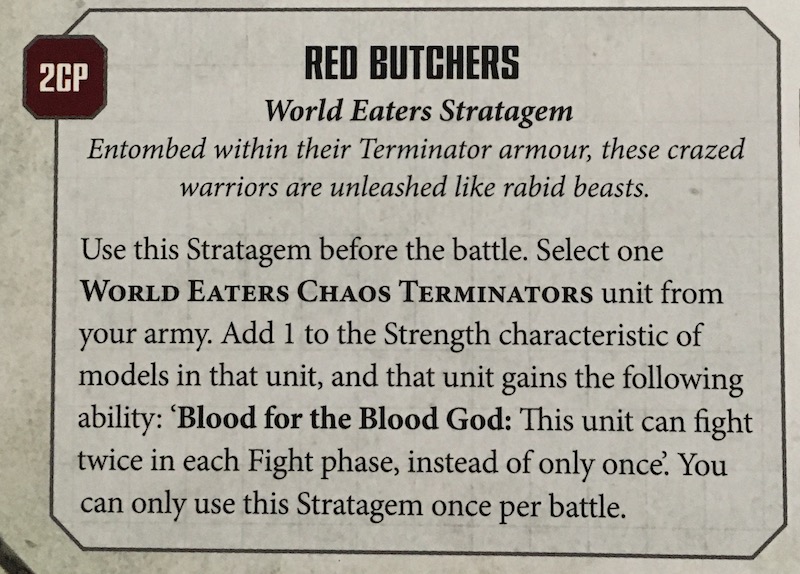 Chaos got a TON of new stratagems in the book Faith and Fury. But we singled out Red Butchers because it’s a really strong option and Khornate Terminators on the tabletop have been rare in the past. But if you see a squad marked for the Khorne in a Chaos list, this is why. Not only do they get an extra point of strength with this strat, they also get to do the whole “We attack twice in the Fight Phase” thing that Khorne Berzerkers do. Having a unit that you probably haven’t expected to see show up and then get to attack twice sure wouldn’t be a fun trick to have sprung on you, would it? 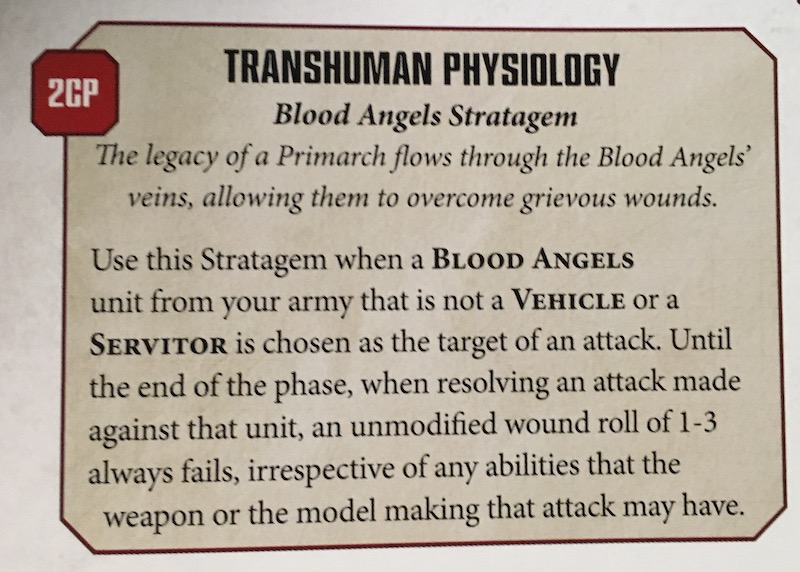 This one is courtesy of Blood of Baal which had a bunch of new stuff for the Blood Angels in general. The reason we chose this one is because it works on a ton of units in your typical BA army – but it really makes Death Company BRUTAL. Just imagine those screaming psychos hitting your lines and getting buffed by this. Were you counting on your Power Fists to help punch your way out of that mess? Or perhaps you were planning on blasting them to bits with Str 6+ weapons. Well, now those also need a 4+ to wound. Surprise.

All The Space Marine Character Upgrades 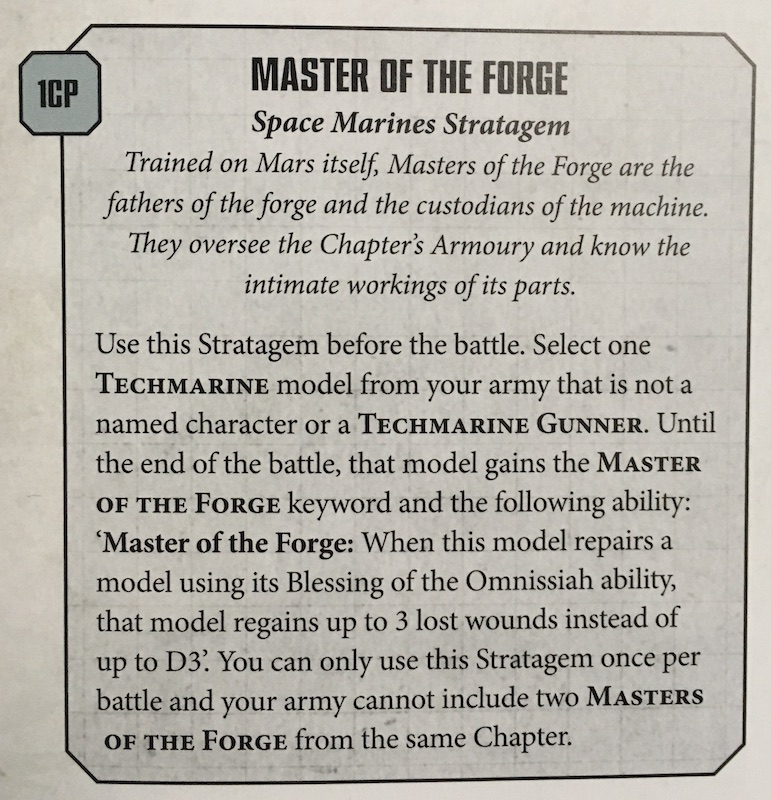 We just picked Master of the Forge because it’s a good representation for all the Space Marine Character Upgrade options. That and it’s kind of popular at the moment, too. Anyhow, you should be aware that pretty much all the Space Marine Characters can be upgraded to “Master” status – like a Chapter Master, but for your other characters. This opens up new options like wargear and warlord traits across the spectrum. It also (typically) gives them an improved version of their existing ability. Like “Master of the Forge” in the text above.

Thankfully, this stratagem has to be used before the battle so ideally, this is noted on the army list – but always double check if you’re confused. Better to ask before the game so that you don’t get hit with a “Gotcha” later on.

Progeny of the Hive – Tyranids Stratagem 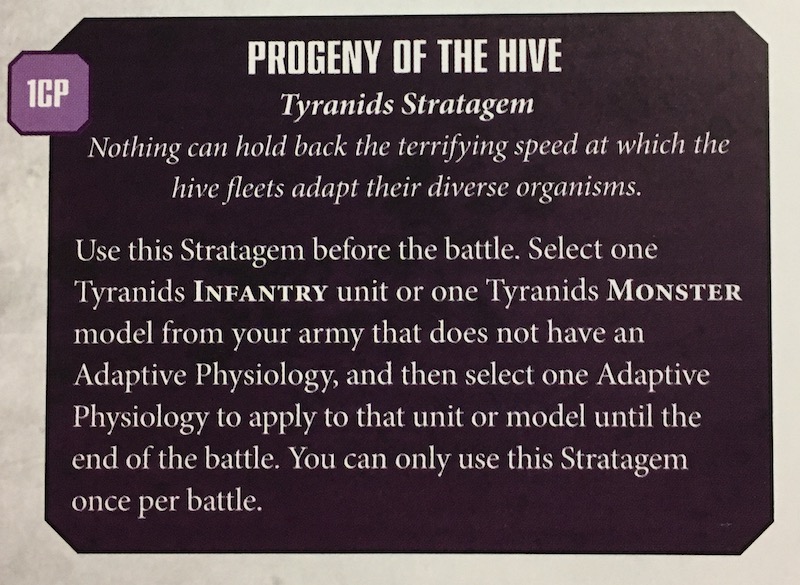 Similar to the Space Marines, the Tyranids got a new Stratagem that grants units access to Warlord-like abilities know as Adaptive Physiology. These abilities vary in scope and which units can be targeted by them, but the results can open up some pretty nasty combos for Tyranids. Now, Progeny of the Hive can on be used on one unit in their army, but the same caveat applies as the Space Marine one. Just double check if you’re confused as to what they do. It’s not fun to get blindsided by unit that can do something you had no idea about. 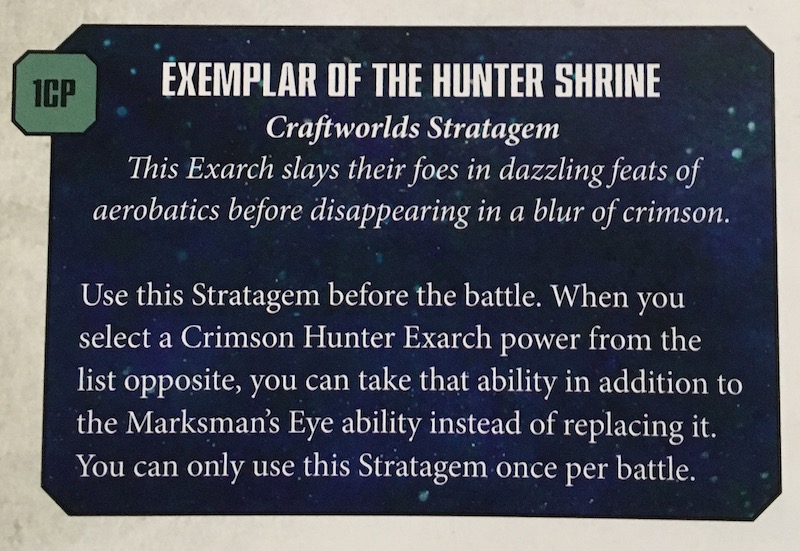 Oh you didn’t think we’d go all the way back to Rise of the Phoenix, did you? Well the Aeldari ALSO got these new character upgrade options, specifically for their Exarchs. These stratagems allow them to further customize their Exarch abilities and can also lead to some surprisingly effective units. Again, this is a thing you need to be aware of and they can do this to multiple Exarchs in their lists. This unlocks a new chart of abilities those Exarchs can use that can benefit them or their respective unit. It’s a neat system but if you’re not expecting it or even aware it’s a thing, it can really feel like a “wait, you can do WHAT now?” moment.

Psychic Awakening has added dozens of stratagems to the game and these are only a handful spread across the updated armies so far. There are TONS more out there that folks might even consider to be even more effective than the ones listed above. As I said before, don’t be afraid to ask your opponent about them before you get surprised by them! 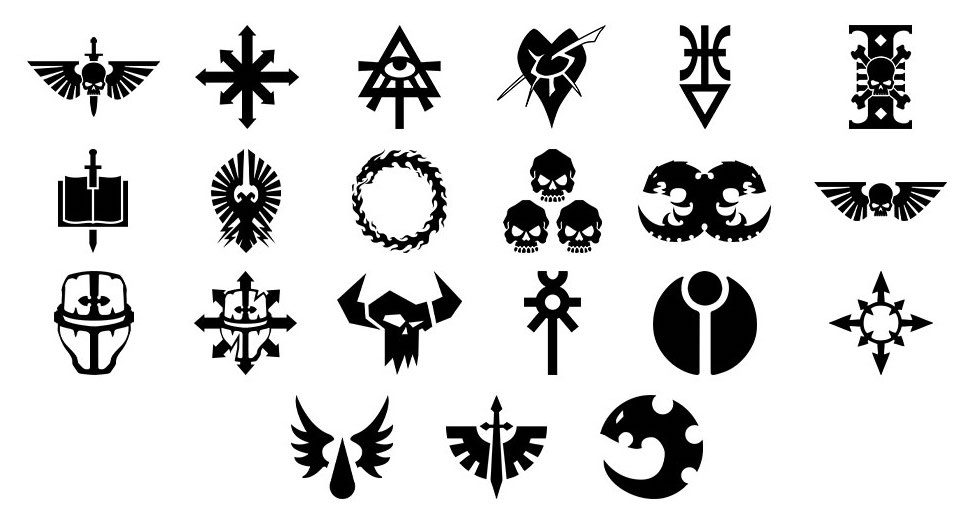 What are some of the stratagems you’ve found to be super effective from Psychic Awakening?