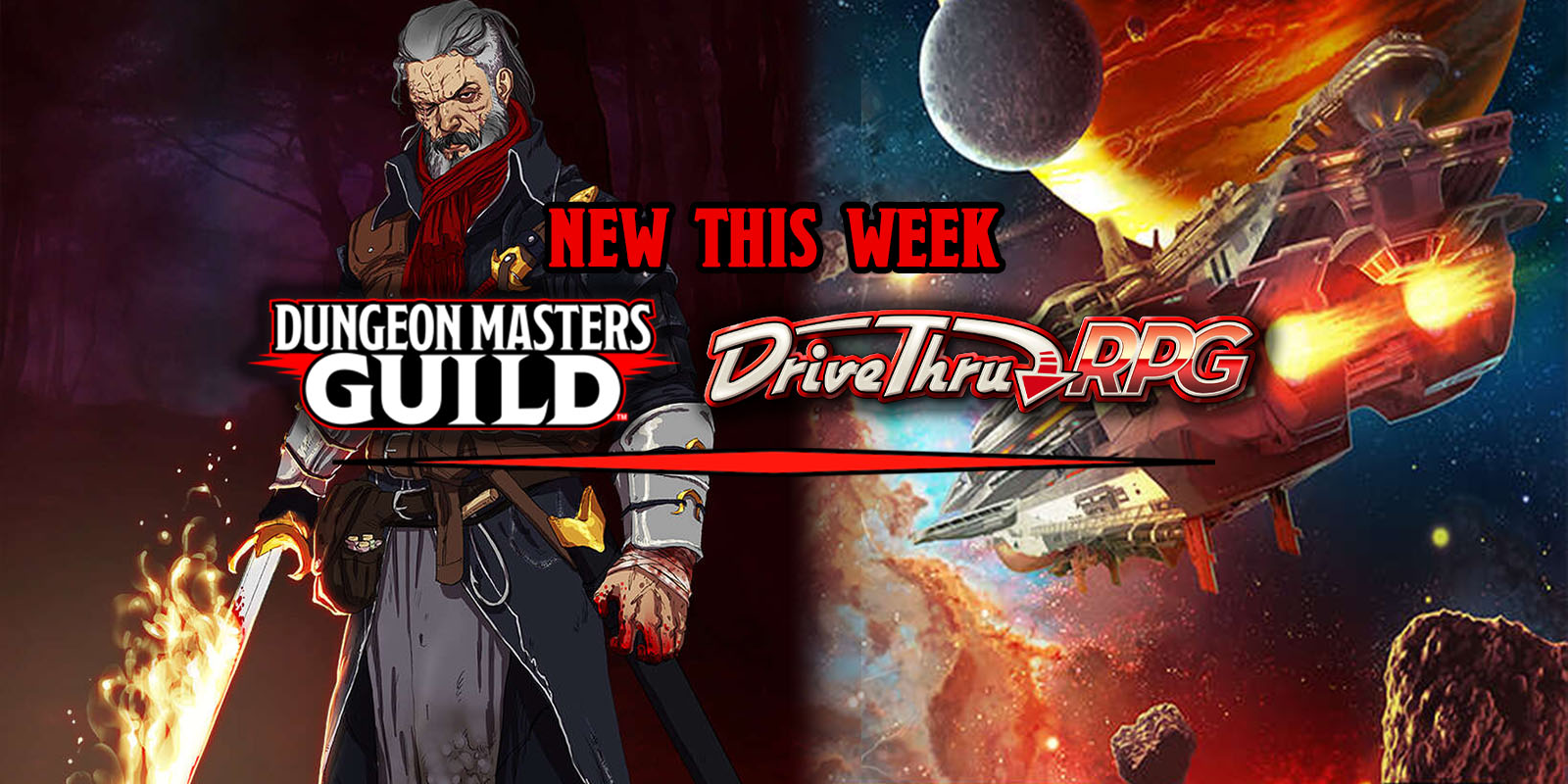 Witchers, Matthew Mercer’s Blood Hunters, and a module with its own soundtrack are just a few of the gems you can find this week on DMs Guild and DriveThru RPG. 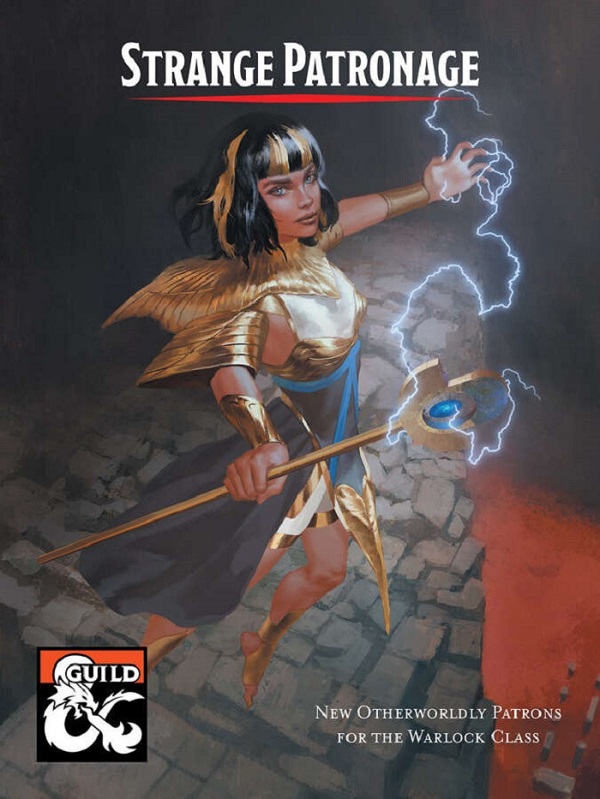 “Strange Patronage is a collection of Warlock subclasses for use with Dungeons & Dragons 5th Edition!

Warlock is one of my personal favorite D&D classes. The lore is fun, the spell slots come back during a short rest instead of long, and eldritch blast is an objectively awesome cantrip. Strange Patronage gives you more ways to make a warlock and new options for how to play them. After all, variety is the spice of life. 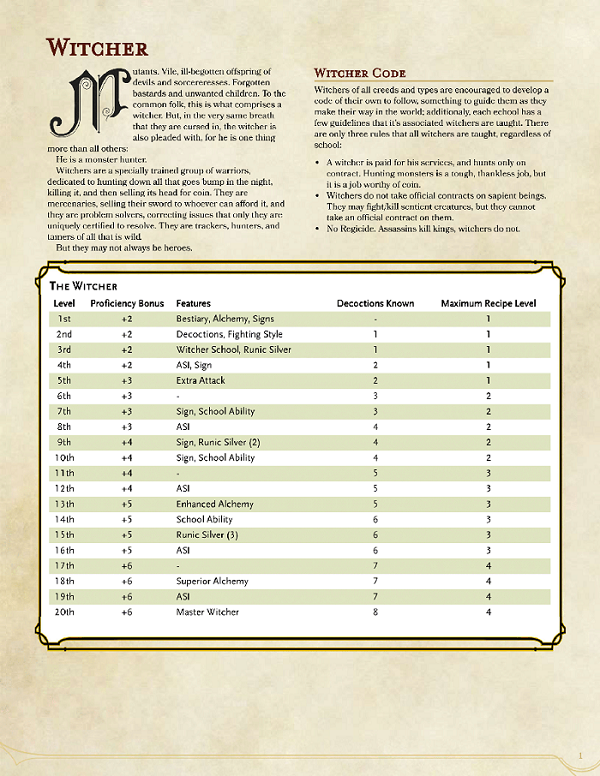 “Mutants. Vile, ill-begotten offspring of devils and sorcereresses. Forgotten bastards and unwanted children. To the common folk, this is what comprises a witcher. But, in the very same breath that they are cursed in, the witcher is also pleaded with, for he is one thing
more than all others:

He is a monster hunter.

Witchers are a specially trained group of warriors, dedicated to hunting down all that goes bump in the night, killing it, and then selling its head for coin. They are mercenaries, selling their sword to whoever can afford it, and they are problem solvers, correcting issues that only they are uniquely certified to resolve. They are trackers, hunters, and tamers of all that is wild.

But they may not always be heroes.”

Throw a coin at this new class based on the video game turned television show, Witcher. Whether you’re a fan of the source material or not, the monster hunter archetype is always useful while dungeon crawling. Add Geralt (or his identical cousin Deralt) to your party and show those monsters that you don’t mess around.

A Crumb in Winter 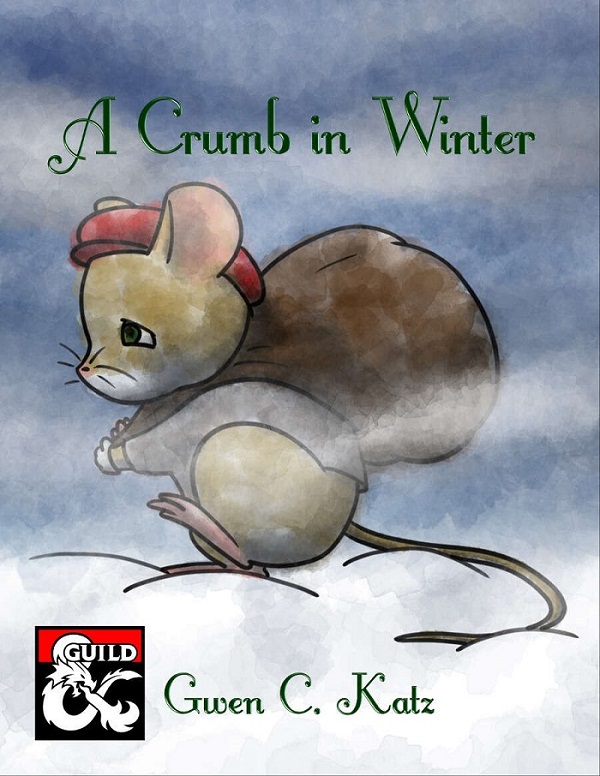 “The Beast Market is a famed destination for anyone seeking rare magical goods, but the Windswept Plains that surround it are filled with dangers. When a baby mouse wanders out of the market during a snowstorm, it’s up to an intrepid band of adventurers to find him.

With intense fights and deeply personal storylines, sometimes we forget that D&D is a game and should be fun. I love lighthearted games like this for that reason. Take a break from protecting the entire realm to help find a lost baby mouse and eat some magic cakes with The Beast Market. 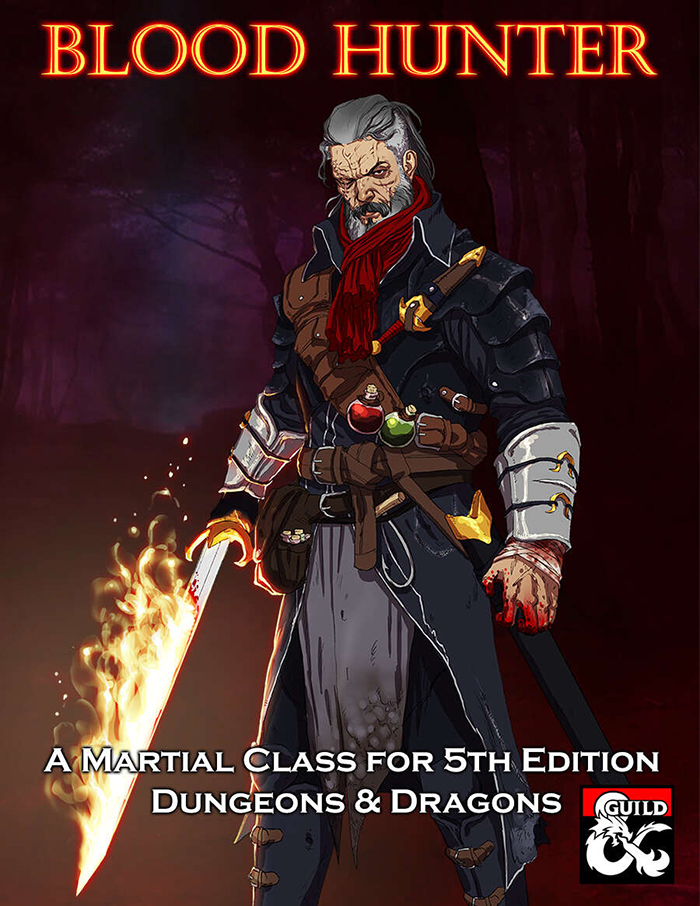 “Often feared or misunderstood, and driven by an unending drive to destroy the wicked, blood hunters are clever, arcane warriors who have bound their essence to the dark creatures they hunt to better stalk and survive their prey. Armed with the rites of forbidden blood magic and a willingness to sacrifice their own vitality and humanity for the cause, they protect the realms from the shadows, ever vigilant to avoid becoming the same monsters they choose to hunt.

Harnessing the dark abilities granted by the use of hemocraft blood magic to enhance their combat prowess, these warriors hunt the wicked with blade and curse, sacrificing their own vitality to gain the upper hand and bring their quarry down.

Fans of Critical Role and Matthew Mercer will want to pick up a copy of the Blood Hunter class this week! This reworking of the previously released class balances out old issues and brings an ease to the character while incorporating new features and abilities. Plus, it’s for a good cause with proceeds going to the AU Bushfire Relief Charity. 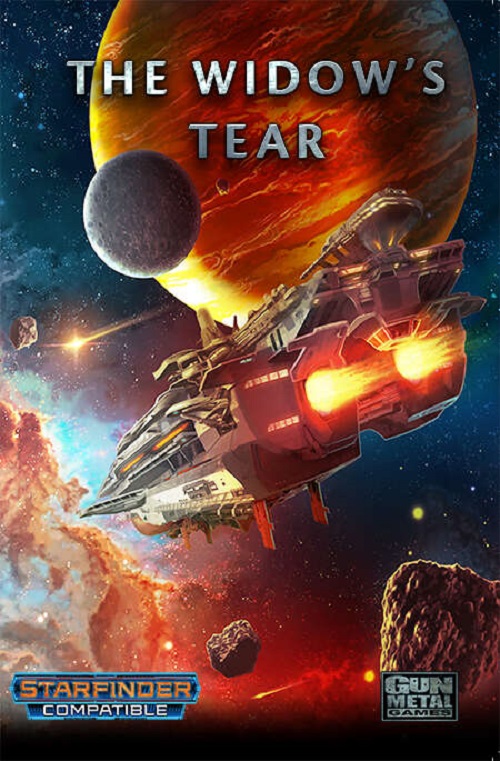 “Just beyond the outermost edges of charted space lies a forgotten nebula of immense size, invisible unless you know where to look. To the approaching watchful and knowing eye, the luminescent clouds of dust and ionized gases, swell into view, roiling in prismatic majesty and overripe with stars beyond reckoning. The stars within the system are flanked by rich worlds of wealth and mystery, paradises that are often fertile and well within habitable parameters. Most were one home to intelligent life, but now only silent ruins to suggest the dark truths lurking just beyond perception. Despite these subtle concerns, the march of colonization of The Widow’s Tear is on.

A 210 page, fully bookmarked and layered PDF, The Widow’s Tear is designed to be a “plug and play” setting you can easily drop into your own Starfinder game regardless of whether or not you are playing in the Starfinder universe, or in a world of your creation! You can use the entire nebula as is or pull any of the star systems, creatures, or races out and drop them right into your game! Likewise, all of the rules are modular, so you can use them however you like.”

Widow’s Tear sounds like the exact sort of sci-fi standard that I’d get sucked into. The module is flexible enough to work in the standard Starfinder world or one your group has homebrewed, and the description is so beautiful and evocative that I want to know what the rest of the game they’ve written looks or sounds like. If you want to step into Starfinder or are already there and need a new adventure for your crew to take on, get a copy of The Widow’s Tear. 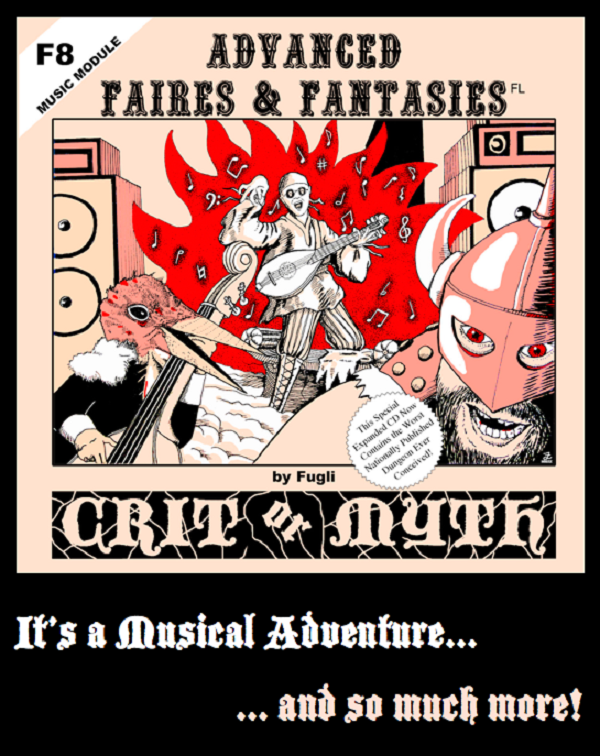 “Relive a magical experience with Fugli, an old school gamer bard, as he revisits his old labyrinthian adventures through the twisting and turning rules and tables that heralded a revolution in gaming over forty years ago. Once upon a time, the genre now referred to as table top role playing games was all new and fresh, and there were very few on the market to chose from. Now we enjoy (or suffer) many choices in that once limited field, spreading the magic of the genre thinner with each incarnation Musical Tracks Include These Original Songs: Epic Myth, Conga Line of Doom, The Wild Roller, Deck of Many Don’ts, Random Tables, Baba Yaga’s Hut, The Demon Prince, Flavor Text, Parts is Parts, Alignment Blues, The Hoard, and Eye of the Beholder. Files also include video of some tracks that did not make it into this collection, AND a very old school dungeon titled Striek Hollous: The Tomb of the Eighth Blue Wizard that was originally published in 1980. (You can debate just how bad it is later.) Music, video and a module (and a bit more) all for one low price.”

This sounds like a game based on a Tenacious D music video in the best possible way. Play your way through a cavalcade of bad (or incredible?) puns with an included soundtrack. Crit of Myth promises to be the tongue firmly in cheek fun that everyone needs in their tabletop adventures from time to time. 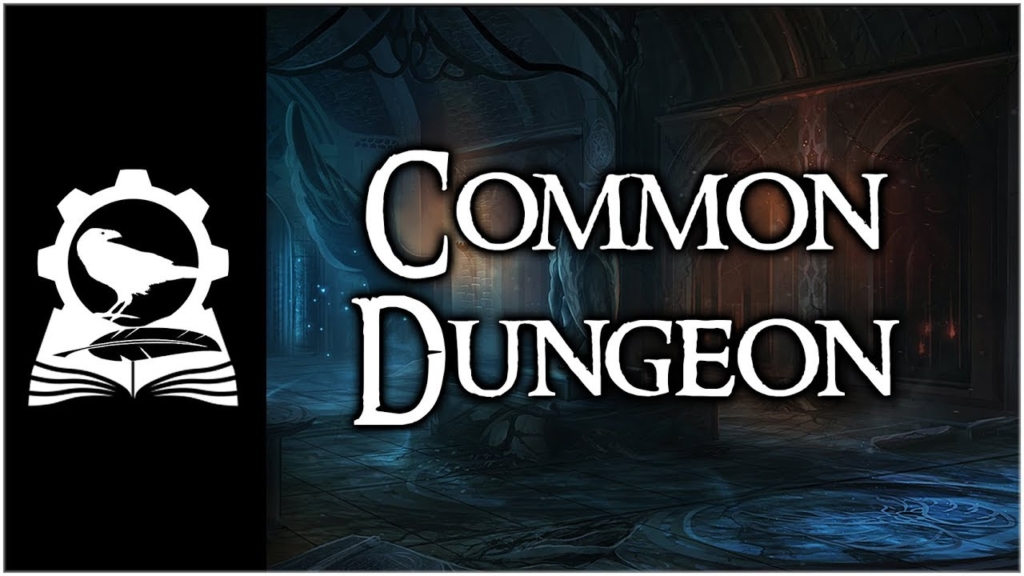