Age of Sigmar Lore: The Origins of Archaon 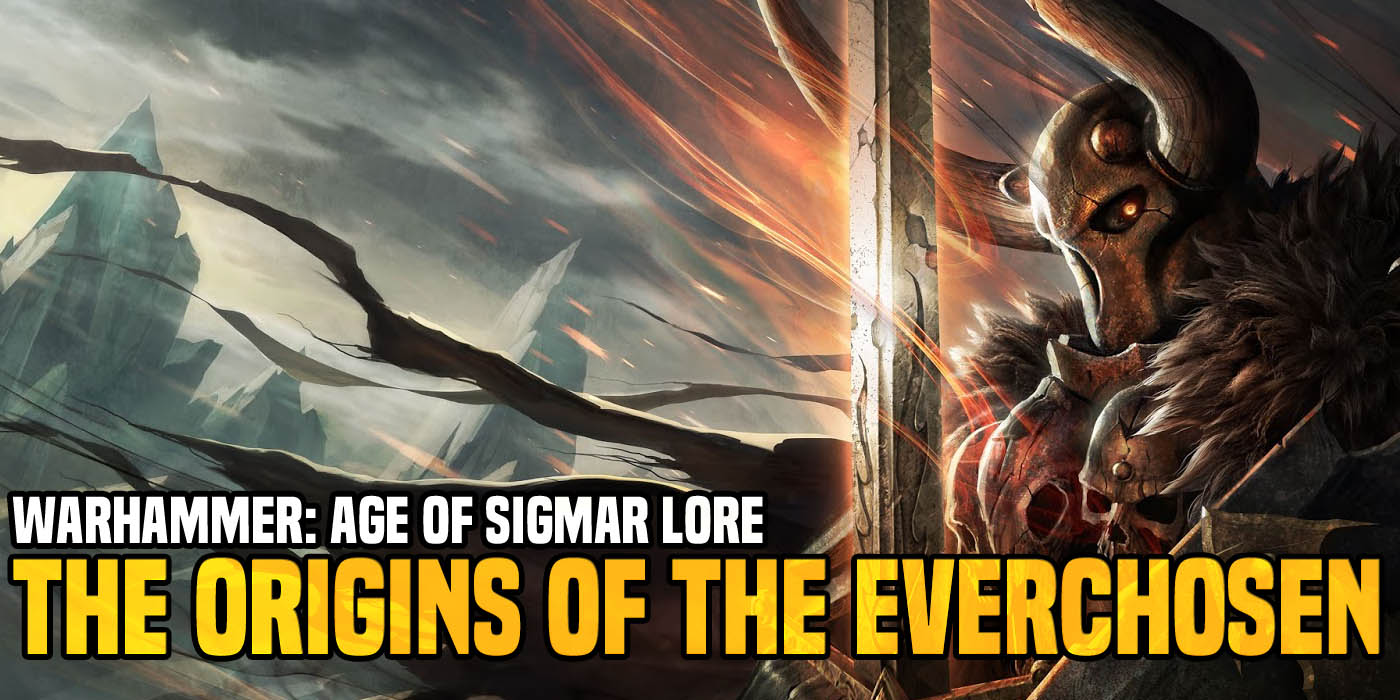 Loremasters, today we revisit the Old World to discover the origins of Archaon!

Archaon wasn’t always the Lord of the End Times Everchosen of Chaos, the supreme champion of the four Chaos Gods. There was a time before that when he was something very, very different. We travel to the Old World to revisit the humble beginnings of the mortal who would destroy the Old World and become something even more powerful.

The man who would one day be known as Archaon was born in a small village called Hargendorf, on the coast of Nordland, the result of his mother being raped by a Chaos Marauder during one of the many Norse raids of the Empire’s northern settlements. Born in 2391 IC, the baby was the death of his mother, Viktoria, and her husband, Roald, could not bear the sight of him. The midwife who attended the birth reluctantly took the child on the road with her, eventually leaving him on the steps of a Church of Sigmar, before abandoning him. The child was nearly savaged by wolves, before the local priest, Hieronymous Dagobert, appeared and drove them off.

Dagobert raised the child, whom he named Diederick and who grew tall and strong. When he was old enough, he became a squire to Sieur Kastner, a Templar of Sigmar (albeit a fat, intemperate, drunken and womanizing one). Kastner died ignominiously in 2406, after falling into a pit trap in the Drakwald and being eaten by Night Goblins, who also killed Diederick’s fellow squire, Nils. Diederick himself survived by the skin of his teeth, and retrieved Kastner’s sword, Terminus, and his warhorse, Oberon. With no place to go, Diederick decided to use an idea suggested by Nils just before he died: Kastner’s long-suffering wife was a generous (and spiteful) woman, who used her husband’s considerable wealth to encourage the ambitions of his many bastard children, who were likewise encouraged to take their father’s last name. Diederick presented himself at Kastner’s ancestral home as one of these children, and was eventually christened Diederick Kastner, a Templar of the Knightly Order of the Twin-Tailed Orb. 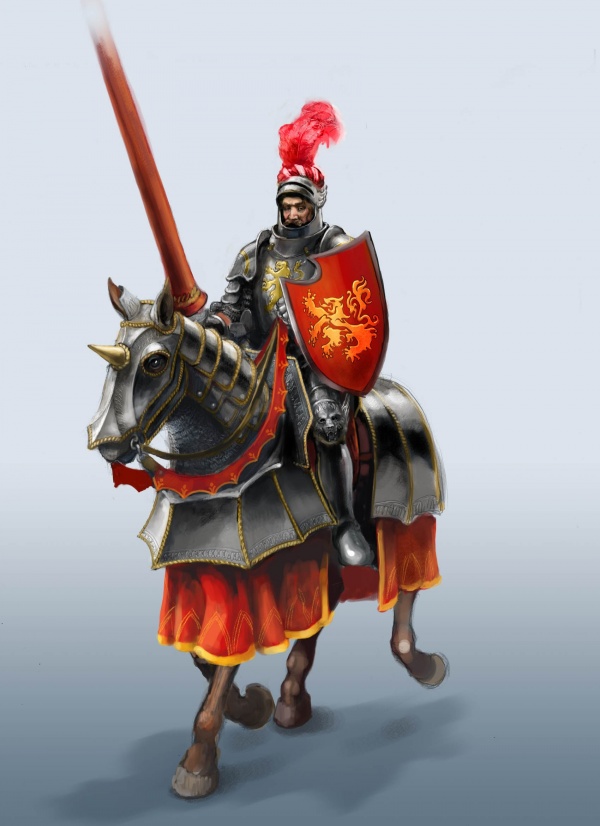 A Knight of Sigmar

It was in 2420, after several years of knightly deeds in Sigmar’s service, that Diederick was started down the road to damnation. In Hochland, Diederick rescued a young novice nun, Giselle, from a band of Beastmen. In combat with the monsters’ champion, Diederick clashed Terminus against the other’s weapon, breaking off a shard of warpstone that flew into his faceplate and pierced his eye. After killing the last of the Beastmen, Diederick collapsed and was brought back to Dagobert’s church, insensible with pain and fever.

Giselle had been tasked by her abbess to flee the destruction of the convent with dangerous tomes of Chaos knowledge that had been kept in the convent’s vault. These included the Liber Celestia, a series of prophecies by the Tilean heretic Necrodomo the Insane. Reading some of these prophecies, Dagobert was disturbed to realize that some had already come true, and even more disturbed that Diederick seemed to be the prophesied Everchosen of Chaos. Diederick overheard this, and in spite of his injuries, insisted on accompanying Dagobert and Giselle on their mission to deliver the forbidden books to the Grand Theogonist at Altdorf.

According to the Daemon Prince Be’lakor, Diederick’s fate was guided by the powers of Chaos since before his birth. Be’lakor sought to create a perfect champion to bring about the next age of Chaos, one whose body Be’lakor would itself assume when the time was right. Be’lakor claims to have “interceded” on the child’s behalf several times, without which he never would have been born or else died several times over: 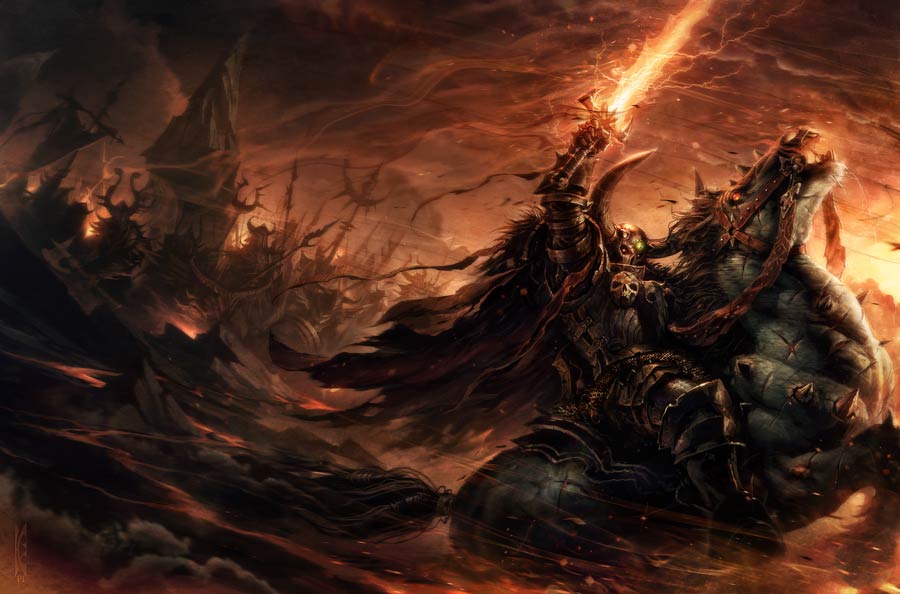 Birth of the Everchosen

He read ancient manuscripts written by Necrodomo the Insane, which contained blasphemies about the religion of Sigmar and the nature of Chaos. Screaming in rage, he called the gods liars and burned down the temple and manuscript. He then hunted down and killed his entire family. Adopting the name Archaon, he travelled north towards the Chaos Wastes. There he offered himself to the Chaos Gods as a tool of destruction. His lifespan unnaturally extended by his Chaos patrons, Archaon spent the next century gathering the Six Treasures of Chaos:

After assembling the Six Treasures of Chaos, Archaon became the Everchosen and raised an army that eventually led to the destruction of the Old World.

If you’d like to learn more about Archaon, visit the Lexicanum! The Old World and The Mortal Realms are now separate.