The Northern Alliance is a new army for Kings of War: Third Edition and they have a great range of unit options. Many – like the Clansmen and Huscarls – have the Wild Charge ability. This is a new ability that gives a unit an extra inch or three on a charge into combat. This is great for breaking stalemates between units staying out of charging range. What’s more, if you’re not charging into combat, the Northern Alliance has the ability to freeze enemies in their tracks by slowing them down with things like Ice-Tipped Arrows or Icy Breath. This means you’ll have the upper hand if you’re racing to objectives.

In the army you’ll find a mix of different races, from the human clansmen to Ice Naiads, elves, wolves and lots more. The core of the army is made up of the clansmen – decent melee fighters with the option for two-handed weapons. Meanwhile, units like the Tundra Wolves give the Northern Alliance a speedy cavalry-esque option, while the Frostfang Cavalry is Large Cavalry that hits like a tonne of frosty bricks.

This is a very varied army and can have quite different play styles depending on the units you chose. You can have a fast army of trees that launch themselves forward before the game begins, a plodding army of elementals, or you focus on infantry and cavalry options. Interestingly it doesn’t have big combat characters – instead the focus is on spell-casting druids which have the Surge spell and like the Undead, can use it on their shambling minions.

Starting with tough Elementals, (fire, air, earth and water) they share Hunter of the Wild, Forest Shamblers and Treemen with the elf army, but they are better here with the powerful druids to back them up. There are fast Unicorn’s, Beasts of Nature and Centaurs who move fast and hit hard. The mix continues with Naiads, Sylphs and Salamanders: a truly varied army of the four elements, fairy creatures and the power of nature, it allows the imagination to run… wild.

Goblins are the eponymous and classic horde army. “The goblin horde” can refer to the entire army and also the typical unit size players will field. What goblins lack in strength and bravery, they more than make up for in sheer numbers. That’s not to say they do not lack a bite however. Giants and trolls are often lured into joining the tide of goblin warriors while fleabags and mawbeats are goaded into fighting or being ridden into battle. Strange contraptions like the Mincer can also prove a deadly addition to their ranks, while the unreliable Big Rocks Thrower can soften up enemies before they’re charged. A goblin player is expecting numbers to win them the day (with the odd rock chucked in from a safe distance for good measure). 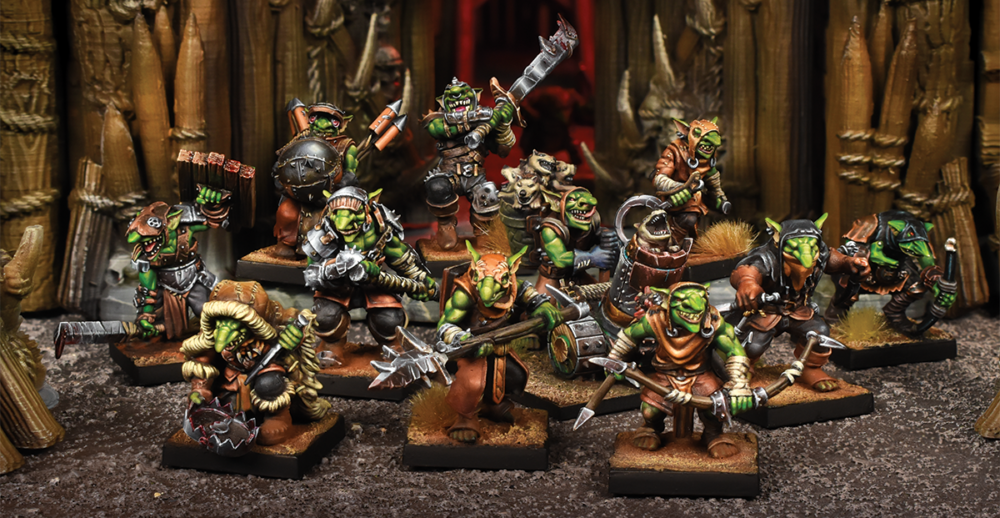 The usual goblin rabble armed with a variety of pointy weapons form the heart of any army in large blocks of sneaky, skittish warriors. Ponderous but solid trolls and giants make their way between the ranks (probably unaware of what they trample underfoot) while down the flanks, the lightning fast fleabag riders and mawbeast packs rush forwards to harass the enemy and throw them off balance. The goblins have access to some crafty war engines like the short range war-trombone and the aptly named Mincer. Nerve is a big problem for goblins (as in they lack it) but they have cheap Inspiring options, like the Flaggit and Biggit.

Check out more armies on the Mantic Blog!