Come see what’s out for Privateer Press. What awaits in the futuristic dystopia that is the world of Riot Quest? Who will venture out in search of loot and guns and gold in the hopes of getting paid and winning glory? Dr. Stygius an Scythe. We talked about it. Check ’em out. 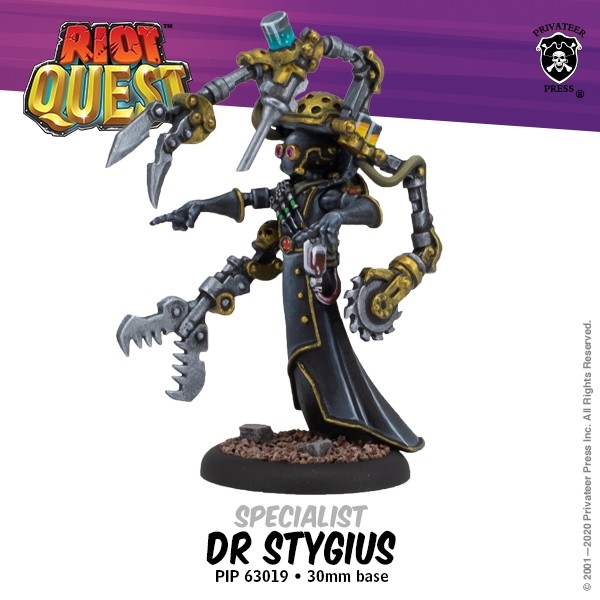 An apple a day might keep the doctor away in the real world, but in a post-apocalyptic Iron Kingdoms, it’ll take some seriously heavy firepower to avoid a visit from Dr. Stygius! Suffer a wound while he’s on your crew, and this sinister Cephalyx has a suite of tools to stitch, saw, or scrape away your ails and keep you in the action. But if you’re looting for the other team, don’t forget your tinfoil hat or you may find Stygius psychically scrambling your cerebellum into a savory sauce!

Doctor Stygius is a Specialist Class Hero that brings a unique and powerful ability to any Crew he joins: Healing! In addition to lowering the cost of Riot Gear equipped to himself or to nearby Crew mates, the “good doctor” can also perform some quick surgery to heal damage his “friends” have sustained in the Arena. Stygius also has the power to melt the minds of his enemies from a respectable distance, possibly even disrupting the opponent’s flow of Action Die thanks to his Scramble ability.

When played in WARMACHINE & HORDES, this model is a Mercenary Cephalyx Solo and the first Warcaster attachment for Cephalyx Warcasters! 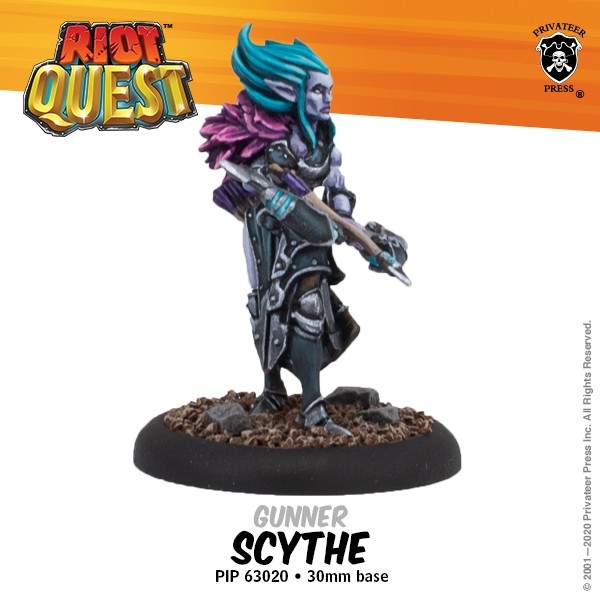 Few of the true Nyss people still exist in the Iron Kingdoms, and those who remain are able to for a reason: they are skilled and deadly hunters. And Scythe is the deadliest. Frosty on the outside, burning with vengeance in the middle, Scythe has a passion for peering deep into your soul and then penetrating it with an arrow fired from her mechanika long bow. With the unmatched range of her bow and unhindered by the most difficult terrain, you can run from Scythe, but you can’t hide. (Well, technically you can hide, but that just makes you a sitting target. Either way, you’re going to end up a kebab.)

Scythe is a Gunner Class Hero that boasts the longest base range of any weapon in Riot Quest. With a Speed of 5 and a Range of 5 on her Mecha-Bow, there is almost nowhere safe to hide in the Arena from Scythe. Thanks to her Pathfinder and Sniper abilities, Scythe ignores obstacles as she runs through the Arena and almost always lands her shot.

When played in WARMACHINE & HORDES, this model is a Mercenaries Minion Nyss Solo that will work for Cygnar, Khador, Retribution, Circle, and Trollbloods. Additionally. she is a Retribution Partisan.