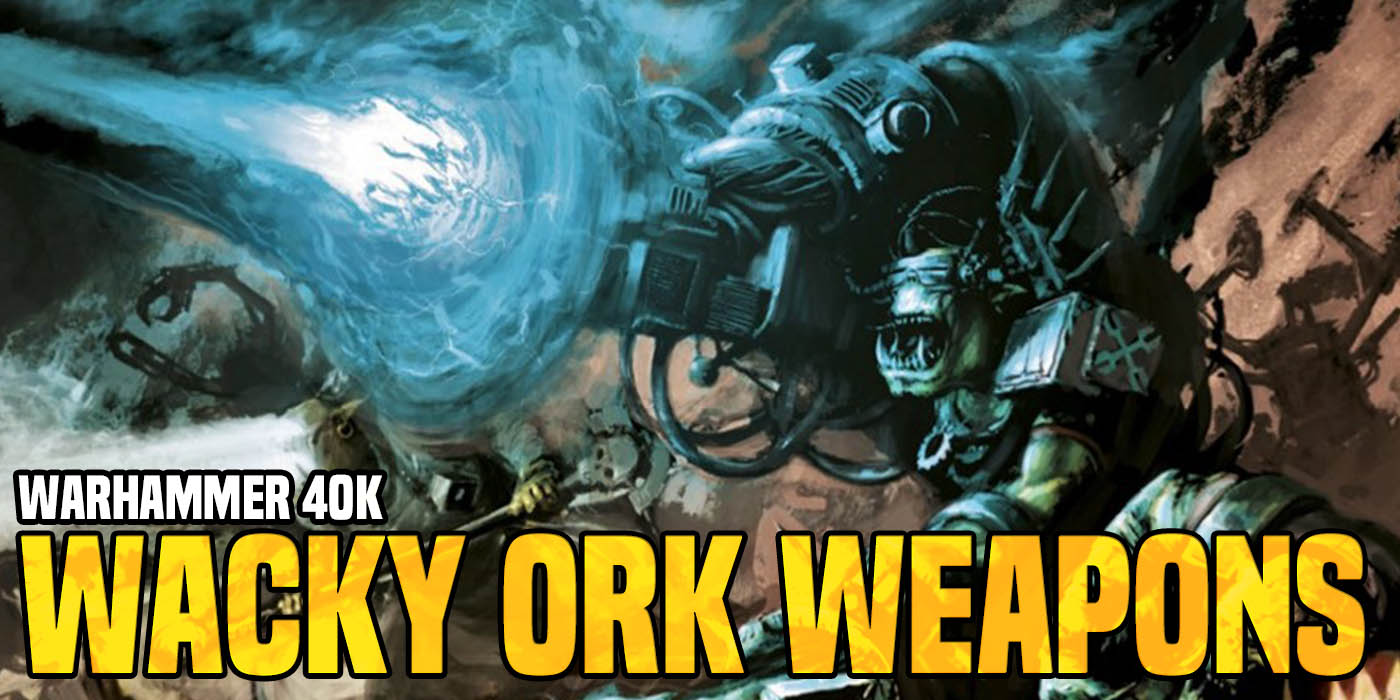 Do you have a hard time understanding how magnets work? Well these Orky weapons will blow your mind.

Ork Technology is a thing of mystery. Most of it works because the Orks believe it will. Is it magic? Is it the psychic influence of the WAAAGH!!! ? Or is it just so advanced we’ll never truly understand it? Whatever the case, these are 5 Wacky Ork weapons that get the job done…somehow. 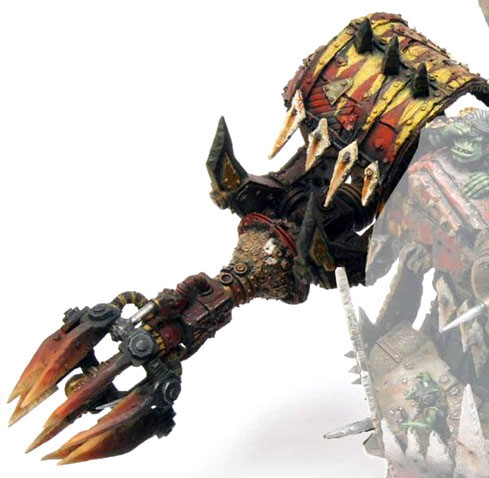 The Lifta-Droppa is a powerful Ork energy weapon. Also known as a Hand of Gork, Lifta-Droppa is a large magno-tracktor beam powered by an ‘atom-smasha’ reactor, able to move huge objects from a distance. They are useful as tools for moving heavy parts about, demolishing buildings and clearing scrap. In battle Orks can hurl enemy tanks around as toys with it.

The massive ‘Traktor’ beam can lift enemy vehicles, drag them through the air and drop them, usually atop the enemy troops or even other vehicles. It causes havoc and destruction among enemy ranks, pleasing to any Ork. This massive weapon can be mounted on Stompas. It can also be found on Battlewagons, but given that is a large and temperamental weapon needing a dangerous power supply, only Orks can be reckless enough to mount it on such a small vehicle. 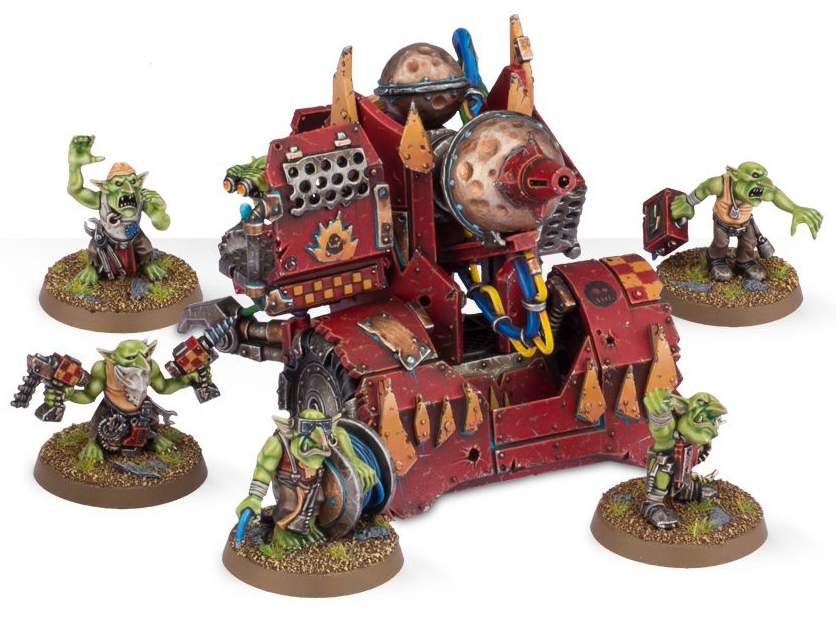 The Bubblechukka is an example of force field technology, weaponized by Orks rather than being used for protection. It fires unstable force bubbles at the enemy that explode on impact. They vary wildly in size and solidity, some like large balls that hit with a negligible strength, whilst others float down like small soap bubbles and, after bursting, inflict heavy damage. It is most commonly used as a Mek Gun. 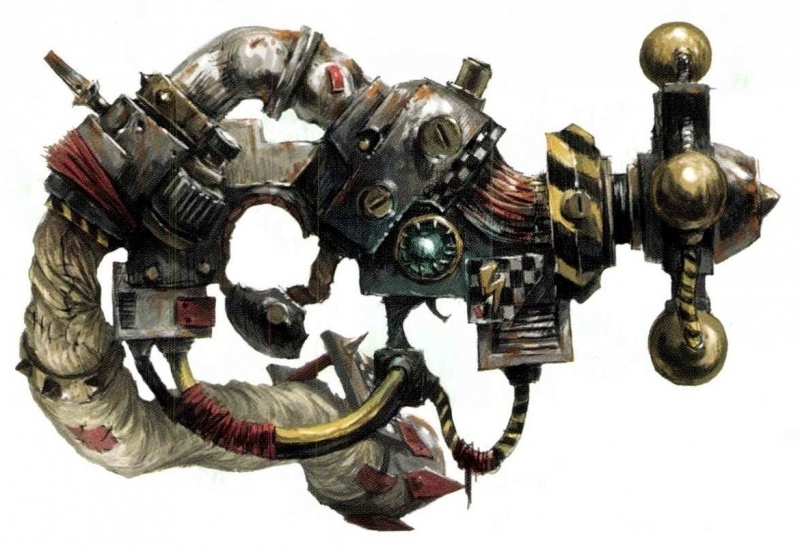 The Shokk Attack Gun is one of the most bizarre weapons the Meks have ever invented. It serves as a great example of just how deep Meks’ innate understanding of technology lies and how they use it solely for creating weapons of mass destruction.

In appearance it is a large, heavy piece of machinery with huge, spinning blades at the front and numerous whirring, grinding cogs and other gubbins sticking out from the casing. When used it makes a distinktive whine, shakes and rattles in an alarming fashion, oily smoke pours from inside as its Mek Operator holds on as tight as he can. It is very hard to aim with a Shokk Attack Gun, as even the strongest Orks find it hard to hold it still.

No one knows exactly how it does it, but the Shokk Attack Gun projects a narrow forcefield through the Warp, beginning at the end of the barrel and ending roughly where the gun is aimed. The portals look like small spinning black holes. In this way it is possible for living creatures to travel through the warp towards the exit point. 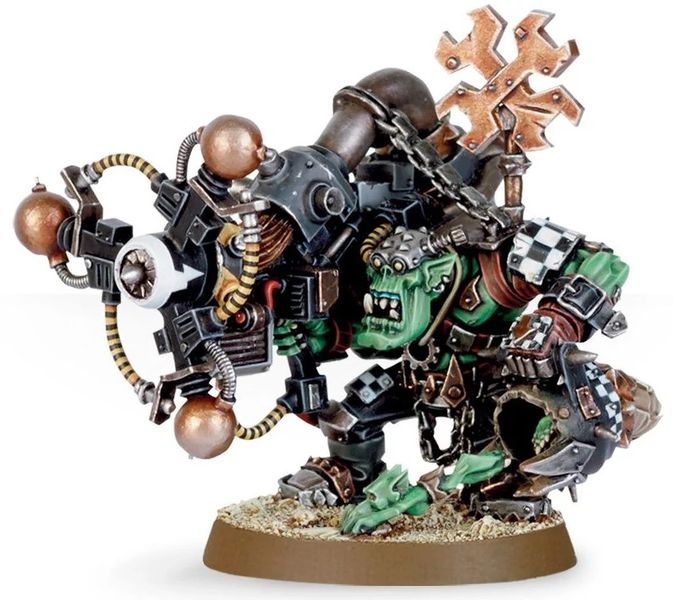 Though the field maintains the integrity, an unprotected journey through the Warp is a very horrifying experience, and no Ork would agree to being fired, and Gretchin have the brains enough to avoid it, so Mek Operators of Shokk Attack Guns gather Snotlings, who are brainless enough to serve as its ammo. They are fired out of the gun, driven out of their tiny minds in the process. This has the effect of terrifying the Snotlings, making them exit the portal in a frenzy, ripping and tearing at anything they encounter as they leave the portal. This is effective because the Mek often tries to aim the gun directly on top of enemy soldiery, and they emerge inside living creatures or enemy tanks (ripping them apart from the inside) as well as landing nearby due to the very effective condensed exit point. Otherwise they are seen dropping out of the sky onto unsuspecting enemy troops. 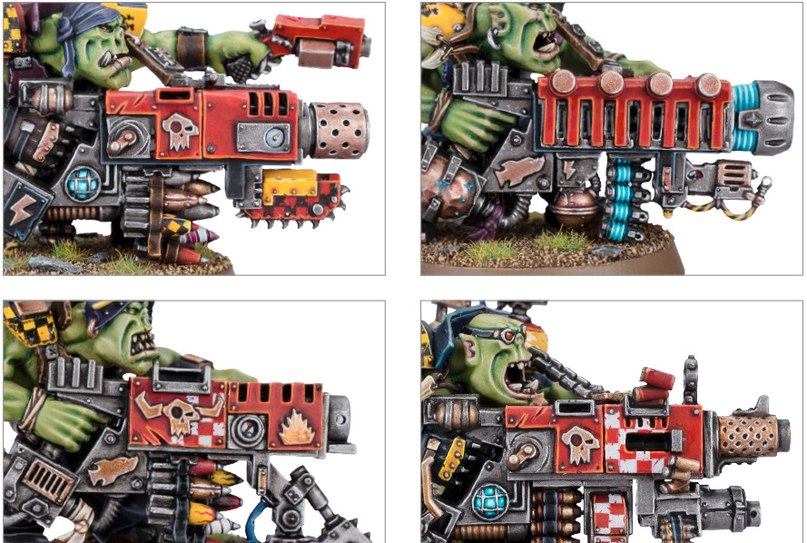 The Snazzgun is a catch-all term for a high-calibre, full-auto weapon constructed by a Mekboy when they are given a large sum of teef by a Flash Git looking for the best weapon around.

These guns intrinsically vary widely in design and general principle of work, so the term may refer to a bewildering variety of kustom and insanely expensive weaponry, much like a Deffgun. However one thing is always true – Snazzguns are always big, loud, rapid-firing, and assuredly deal bloody death. All Snazzguns are unpredictable and deadly on the battlefield, and can always be even further enhanced to make them even deadlier. Common Snazzgun upgrades include:

All Snazzguns are ostentatiously ornamented and excessively enhanced with shiny bitz and snazzy Squig skins in order to satisfy the extravagant desires of their ostentatious owners, who pay a fortune for these overdone weapons. This small fortune often encourages mekboyz to build the shootiest gun possible, be it dumping ridiculously large amounts of bullets into the enemy, firing bolts of raw energy, or some other creative way of blasting whatever is in its crosshairs to oblivion. More often than not, the Flash Git couldn’t care less as long as it’s good an’ killy. 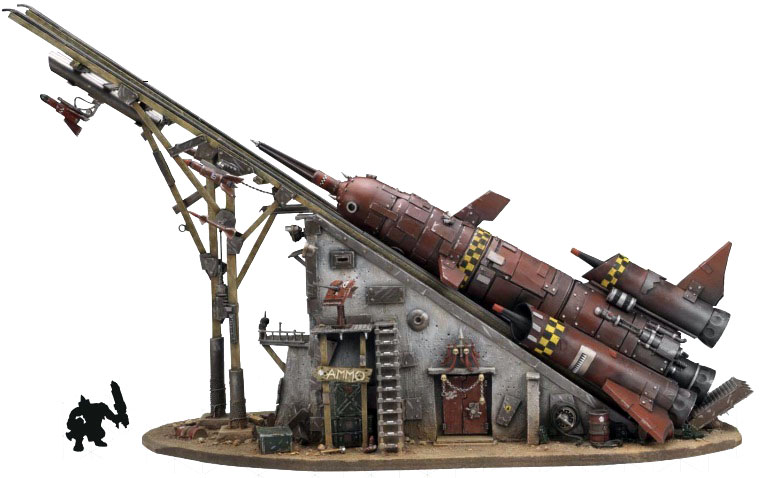 The Pulsa Rokkit is an enormous Ork Rokkit.

The Pulsa Rokkit contains a large and unstable force field generator. It is a special version of Kustom Force Field, mounted on a rocket and launched into enemy ranks. The generator is modified into a special version called a Pulsa and detaches from the rocket and slowly descends (hopefully) to the ground.

The Pulsa launches waves of energy in all directions like a stone on a pond, which sends troops into disarray as they are thrown around and vehicles flip over. Most of the time the Pulsa will burn out after one massive pulse, however on some occasions it can continue to fire.

The crew doesn’t need to be able to see where the rocket is going, ultimately as long as it lands somewhere in the area of the enemy is fine. Foot soldiers are knocked over and sometimes pinned to the ground, heavy weapons on mounts are often flipped over and their crews knocked down, dreadnoughts are sometimes knocked over or even have their legs destroyed, bikes and vehicles are spun round and flipped over and some terrain is even demolished, especially walls.

Check out the Ork Arsenal and learn more at the Lexicanum!